Militant vegan compares the meat industry to the holocaust

A notorious vegan activist has compared the slaughter of animals to the Holocaust.

When asked by hosts Georgie Gardner and Deborah Knight why he once compared dairy farmers to Adolf Hitler in a YouTube video, the militant activist insisted he had retracted the comment which he ‘said in anger’.

But seconds later, the 32-year-old, who was previously jailed for possessing a firearm, likened the meat industry to the killing of six million Jews in the Second World War.

There are several legal ways to euthanise pigs in Australia, one of which includes  carbon dioxide gas.

‘We’re killing millions of pigs and they’re screaming, begging for their lives in these gas chambers. How is that any different?

He continued: ‘When you look at it through the animals’ eyes, this is a holocaust.

‘The word holocaust means slaughter or destruction on a mass scale.

Last month the activist, whose real named is Joey Armstrong, caused outrage when he told a dairy farmer (pictured) heartbroken about giving up her family farm that she should ‘get another job’ 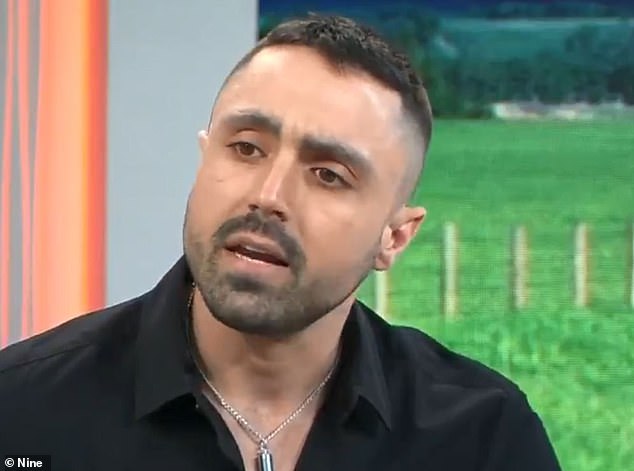 Mr Carbstrong’s comments have offended Jewish activists, who say the comparison between the Holocaust and animal slaughter perpetuates Hitler’s ideology that Jews were subhuman.

Mr Carbstrong, whose real name is Joey Armstrong, initially made headlines when he told heartbroken dairy farmer Treloar to ‘get another job’.

The 26-year-old shared an emotional video revealing her sadness at her family having to give up the farm they had owned for 40 years in Flerieu Peninsula, South Australia.

Mr Carbstrong posted a video to YouTube telling Ms Treloar and her family to deal with what he claimed was a decreasing demand for dairy products, saying the industry was an ‘injustice’.

Asked why he did that, Mr Carbstrong told The Today Show: ‘I wasn’t very hurtful. I was quite sympathetic. I understand she’s been culturally programmed to be a dairy farmer. It’s been passed down traditionally. She’s lost her job.

‘I look at it through the eyes of the real victim, the animals.

In his YouTube video about Ms Treloar, Mr Carbstrong said: ‘What I found interesting is that she considered herself a cow person. Which is really, really bizarre seeing as all those cows go to the slaughterhouse, the bobby (newborn) calves are all killed, they’re all taken away from their mothers, it’s a horrifically cruel and abusive industry,’ Mr Carbstrong said.

He claimed Ms Treloar was ‘indoctrinated by dairy farming’.

‘I mean it’s been passed down traditionally, she said her father did it, her father’s father probably did it too. 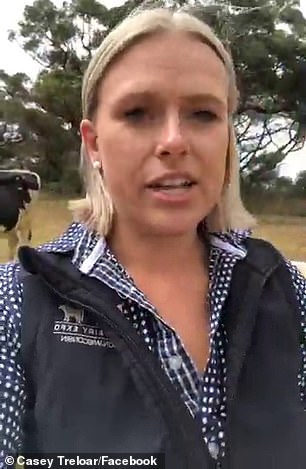 Ms Treloar (pictured), who is a third-generation dairy farmer in South Australia, was brought to tears as she said farewell to the industry she has grown up in

‘Something she considers normal… but what’s happening is demand is changing because we demand you release these animals and stop breeding them into existence to exploit them,’ he said.

‘This dairy farmer here, she can get another job.’

Mr Carbstrong is originally from Adelaide but now lives in London, where there is a ‘big vegan movement’ he told Daily Mail Australia.

He said he sympathises with Ms Treloar’s plight, but believed it paled in comparison to that of animals on dairy farms.

‘I do think that there are victims who are suffering more than dairy farmers, the cows and calves being taken to the slaughterhouse,’ he said.

‘Dairy is cruel and outdated. I do sympathise with her, but I also look at it from the animal’s perspective.’

Mr Carbstrong said consumers were dictating to dairy producers that they no longer wanted their products, and that farmers would be have to adapt.

He disputed being labelled as a ‘militant’, arguing it better described the actions of dairy farmers.

Australia is a small producer of milk but is the world’s third largest dairy exporter as 50% of production is exported.

The dairy industry is Australia’s third largest rural industry, ranking behind wheat and beef, and has a gross value of $4billion.

The Australian dairy industry is concentrated in the south-east of Australia, Victoria is the largest production state, however other states have significant dairy industries.

Victorian production is typically seasonal and enters the export market which makes it prone to volatile global prices. Other dairy production areas (i.e. much of NSW) supply the domestic market which requires year-round production.

The dairy industry is heavily reliant upon water availability; the industry is currently facing uncertainty over water policy.

Since deregulation in 2001, the industry has undergone rationalisation. This has left a core of efficient producers that are able to compete against international competitors who are heavily subsidised.

‘We’re just trying to liberate animals from suffering. I think it’s more militant what dairy farmers are doing,’ he said.

‘We are all about animals. I don’t know whether they really love animals, if you did then you wouldn’t turn them into burgers.’They might have a warped sense of what love is.’

Mr Carbstrong said he wants farmers to come to a ‘middle ground’, where they focus on plant-based alternatives to dairy.

Ms Treloar, who is a third-generation dairy farmer in South Australia, was brought to tears as she said farewell to the industry she has grown up in.

‘The clock has run out and it’s time to say goodbye,’ she said.

‘We are getting 38 cents a litre across the year and it’s completely unsustainable. We can’t really afford to keep going anymore.

‘We’re forever the optimist that the industry will get better – but for our family, we’ve come to a point where we can’t do it anymore.

‘Dairying is something my dad has done his entire life, and I have done my entire life, but it has come to the point where our family has had to say ”that’s it for us”.’

She said her family’s product had been devalued by dollar-a-litre milk, which had added to the problems facing the industry.

Supermarket giants Woolworths and Coles decided in 2010 to sell milk for a dollar a litre, sparking a sharp cut to the viability of farming dairy.

Dairy farmers have hit back ever since, claiming the price drop was devastating the industry.

Australia is the world’s third-largest dairy exporter, with 50 per cent of production sent overseas.

The dairy industry is worth $4billion to the Australian economy. Australia produces a range of dairy products including milk, milk powder, yoghurt, butter and cheese. 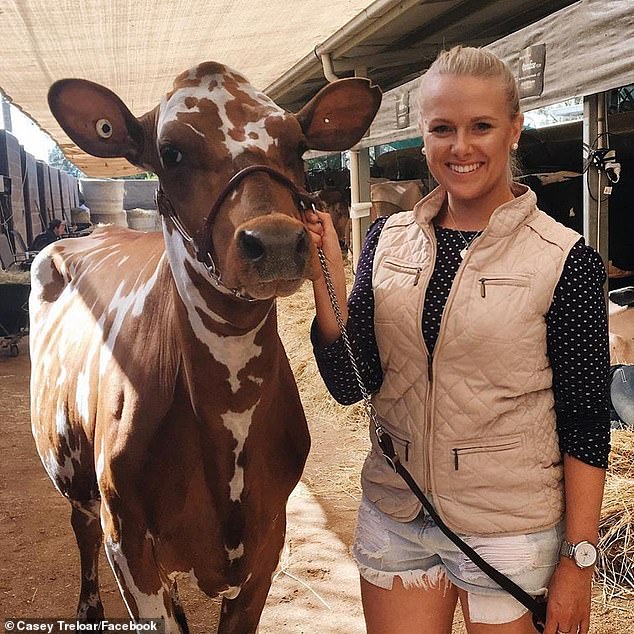 She (pictured) said her family’s product had been devalued by dollar-a-litre milk, which had added to the problems facing the industry