Coffins of coronavirus victims were whisked away on a fleet of army trucks last night after a cemetery in northern Italy was overwhelmed by the death toll.

The column of army trucks brought the dead out of Bergamo on Wednesday night in what Italians have called ‘one of the saddest photos in the history of our country’.

The cemetery in Bergamo can no longer cope with the mounting death toll in the city, where more than 4,300 people have been infected and at least 93 have died.

Mortuaries are full and crematorium staff have been handling 24 bodies a day, including the regular drumbeat of non-virus deaths, meaning the bodies of virus victims have had to be dispatched to neighbouring provinces.

A fleet of army trucks on a highway in Bergamo last night, transporting the coffins of coronavirus victims out of the city after the local cemetery became overwhelmed by the virus death toll 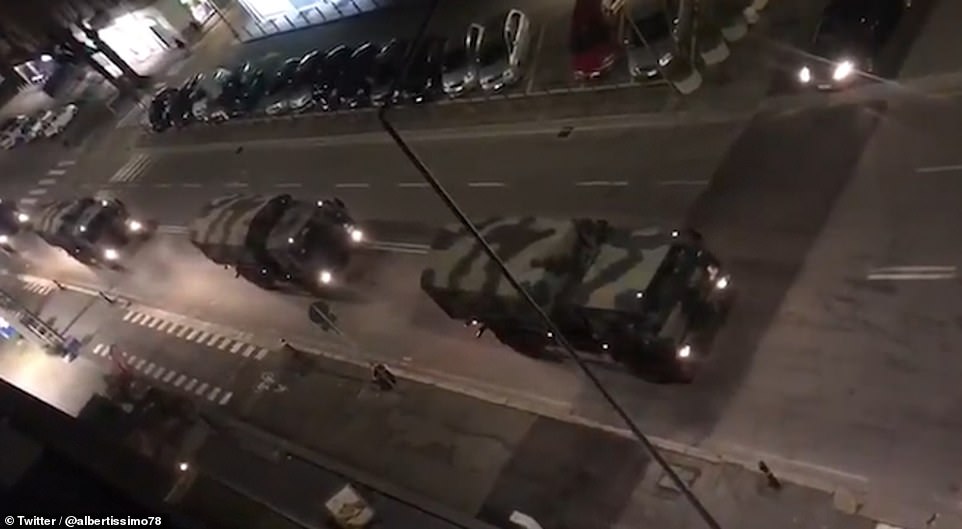 The army vehicles drive along a Bergamo road as seen from the window of a nearby building, taking coffins out of the city 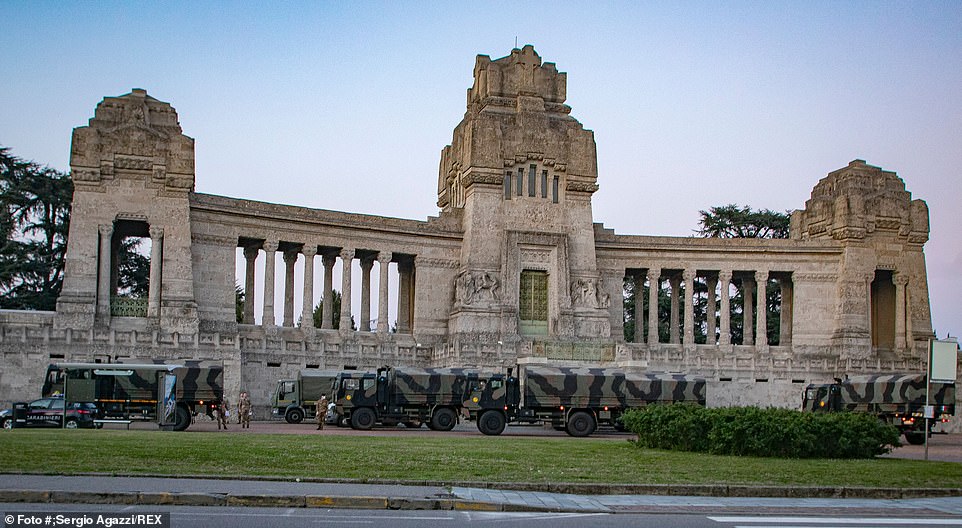 Italian army trucks are parked next to a monument in Bergamo yesterday as they prepared to take coffins out of the city. At least 93 people have died of coronavirus in Bergamo and more than 4,000 have been infected 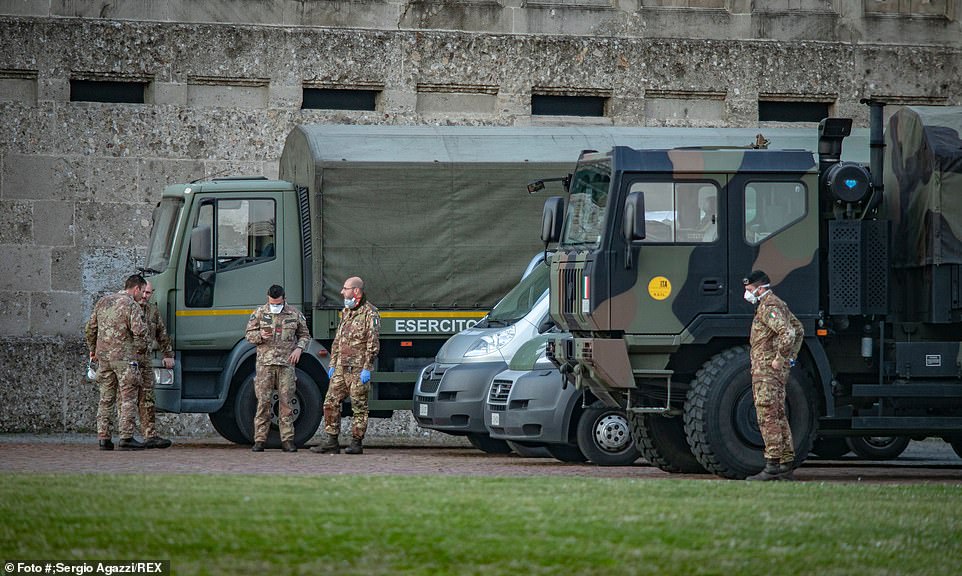 Italian soldiers, some of them wearing face masks, gather next to some of their trucks in Bergamo yesterday where local crematorium staff have been handling 24 bodies a day

An army spokesman confirmed today that 15 trucks and 50 soldiers had been deployed to move bodies to neighbouring provinces.

Italian media said there were around 70 coffins in the grim procession last night as the bodies were taken from the crematorium to the highway and out of Bergamo.

Giacomo Angeloni, the local official in charge of cemeteries in Bergamo, said earlier this week that the crematorium was handling around 24 bodies a day, almost twice its normal maximum.

Local authorities in Bergamo had appealed for help with cremations after being overwhelmed by the death toll.

The pews of the crematorium church have been removed to leave space to lay out scores of coffins but more have been arriving every day.

One Italian who saw the picture of a column of trucks said it was ‘one of the saddest photos in the history of our country’, while another said it was a ‘photo of war’.

‘We are Italians and it is at times like these that we bring out the best in us. We will get out of it and we will do it for them too,’ one said. 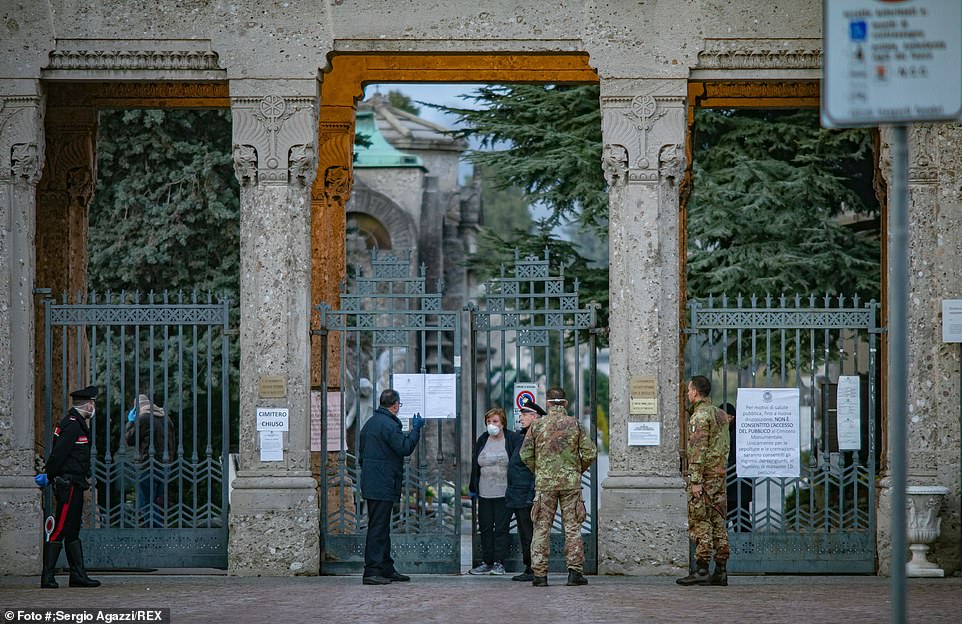 Italian soldiers speak to people at the entrance of the cemetery in Bergamo, where bodies have had to be moved out of the city because local undertakers and crematorium staff cannot cope 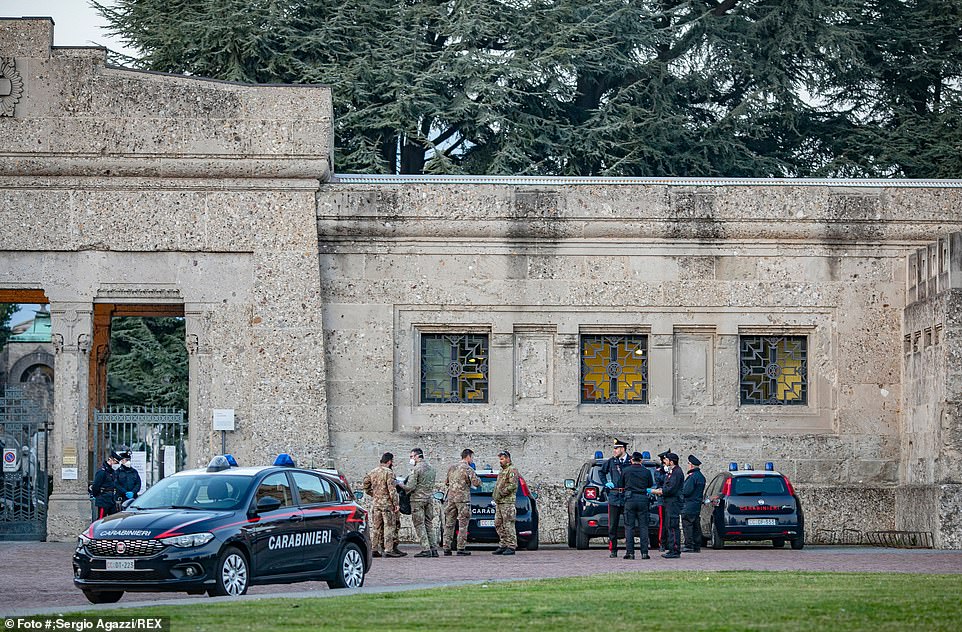 The army intervenes to move the bodies from the main cemetery of Bergamo, in Lombardy which has been worst affected by the health crisis in Italy 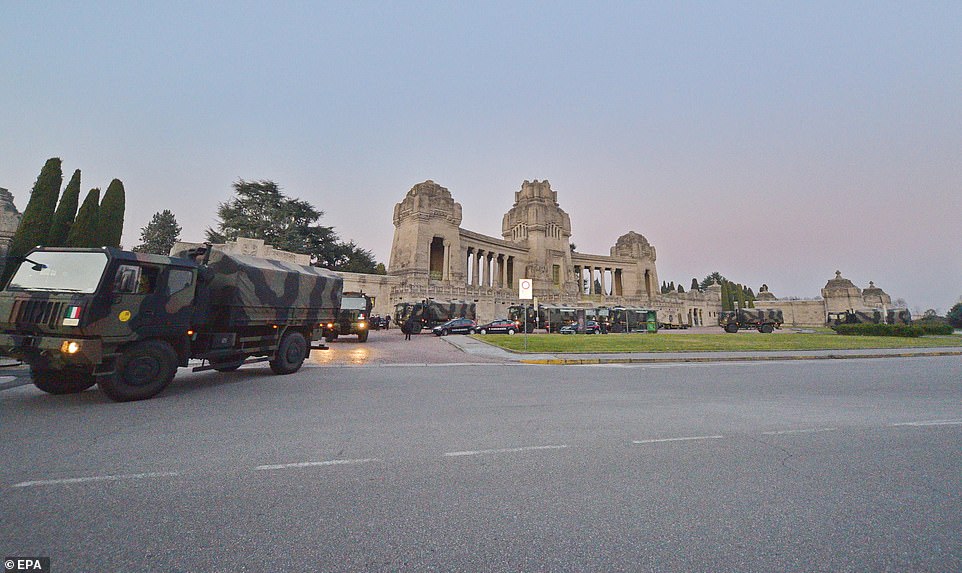 The crisis also underlines how health services in northern Italy have been overwhelmed by the pandemic, with doctors describing hospitals in crisis and many medics working from makeshift tents.

The governor of Lombardy, the worst-affected region which includes Bergamo, said doctors and nurses in the region’s hospitals were at their limits.

‘I’m worried about the possibility they could succumb physically and psychologically because if they were to succumb, it would really be a disaster,’ cemetery director Angeloni told Italian radio.

Italian prime minister Giuseppe Conte today ordered the unprecedented national lockdown to continue past the original deadlines, some of which were as soon as March 25.

Officials have said tougher measures could be needed because too many people are not respecting the order to stay at home unless necessary. 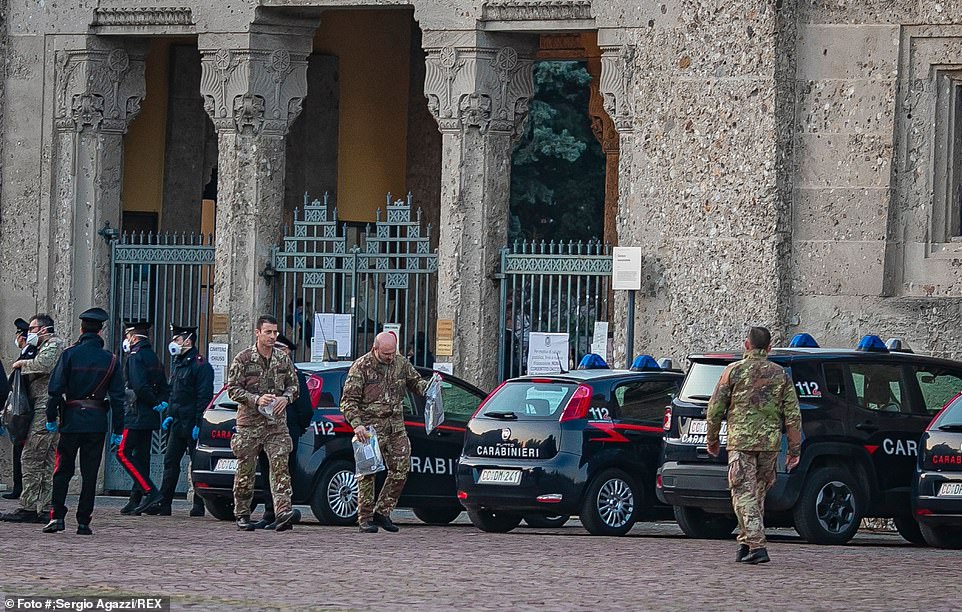 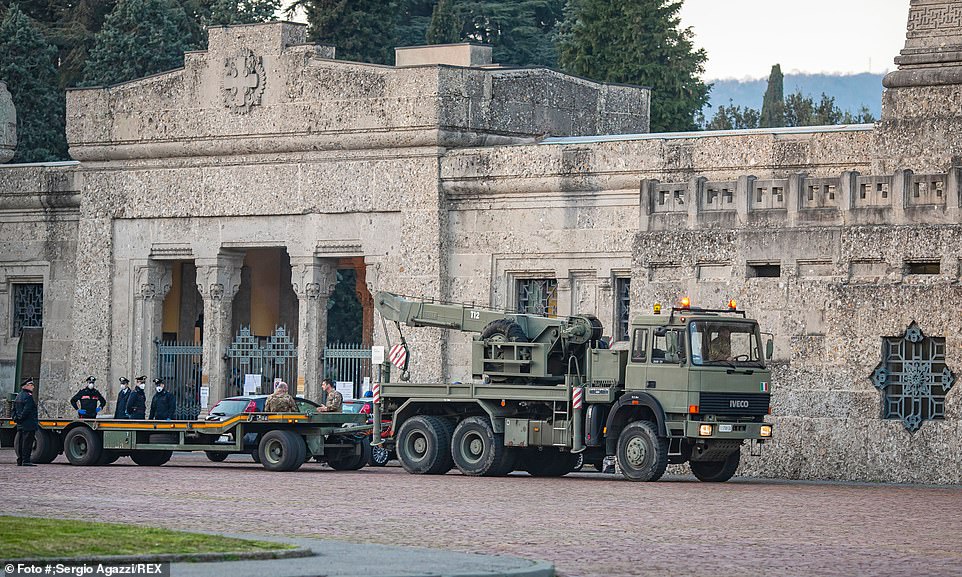 An army spokesman confirmed today that 15 trucks and 50 soldiers, some of which are pictured, had been deployed to move bodies from Bergamo to neighbouring provinces 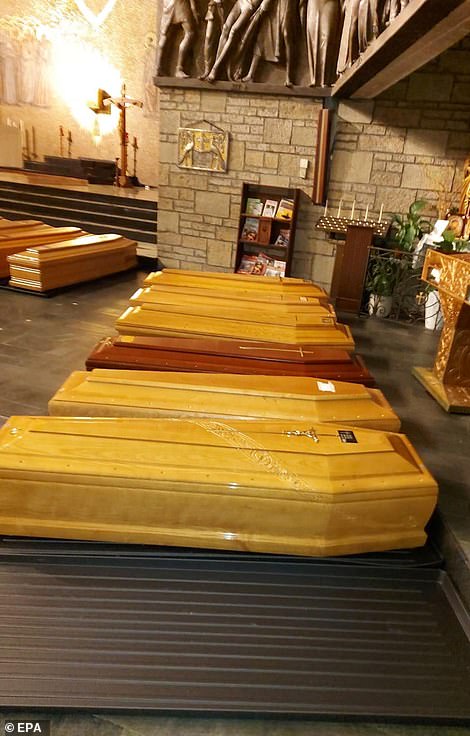 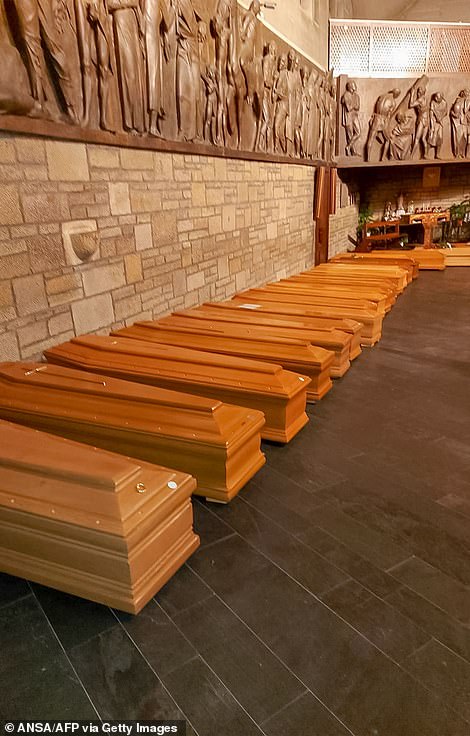 Coffins are laid out in a chapel at a cemetery in Bergamo, where crematorium staff have been handling 24 bodies a day, including the regular drumbeat of non-virus deaths

Italy recorded a record 4,207 cases and 475 deaths yesterday, scuppering hopes that the quarantine was starting to stall the rate of infections.

Italy’s National Research Council (CNR) says it expects a ‘significant reduction’ in the growth rate of new infections in the Lombardy region by next Tuesday or Wednesday.

The northern region of around 10million people has been at the epicentre of the crisis since the start, reporting two thirds of all the deaths in the nation of 60 million.

It has been under lockdown since March 8.

Noting that infections are starting to rise in the south, where many Italians moved after the start of containment measures in the north, the CNR predicts that figures across Italy will only stabilise between March 25 and April 15.

There have been fears that the health system of the poorer south would be entirely unable to cope with an outbreak on the scale which the north has suffered.