Milky Way: Our galaxy had a sizable fraction of its stars when it hit another 10BILLION years ago

Dating the stars: Milky Way had already formed a ‘significant fraction’ of its stars by the time it collided with the ‘Gaia Sausage’ galaxy 10BILLION years ago, study finds

Our Milky Way had already formed a ‘significant fraction’ of its stars by 10 billion years ago, when it collided with the Gaia Sausage galaxy, a study has found.

Researchers led from the Ohio State University used new techniques to more precisely date some 100 red giant stars in the Milky Way and discover its history.

They found that our galaxy’s native stars and the ones it captured from the Sausage galaxy are similar in age, but they move differently and have different compositions.

Our Milky Way had already formed a ‘significant fraction’ of its stars by 10 billion years ago, when it collided with the Gaia Sausage galaxy (as depicted above), a study has found

The Gaia Sausage galaxy which collided with the Milky was more than 10 billion times the mass of our sun.

When the Sausage crashed into the young Milky Way, its piercing trajectory caused a lot of mayhem.

The Milky Way’s disk was probably puffed up or even fractured following the impact and would have needed time to regrow afterwards.

And the debris from the Sausage collision was scattered all around the inner parts of the Milky Way, creating the ‘bulge’ at the galaxy’s centre and the surrounding ‘stellar halo’.

‘Our evidence suggests that when the merger occurred, the Milky Way had already formed a large population of its own stars,’ said paper author and astronomer Fiorenzo Vincenzo of the Ohio State University.

According to Dr Vincenzo and colleagues, many of these ‘homemade’ stars ended up in the thick disc in the middle of the galaxy, while those from the Gaia Sausage have ended up in the Milky Way’s outer halo.

‘The merging event with Gaia-Enceladus is thought to be one of the most important in the Milky Way’s history,’ said lead author and astronomer Josefina Montalbán of the University of Birmingham.

In fact, she added, the collision ‘shaped how we observe it today.’

In their study, the researchers turned to a field called asteroseismology.

Just like regular seismologists can use earthquakes to plumb the interior of our planet, asteroseismologists study oscillations in stars to determine their internal structures — from which their ages can be estimated.

‘That allows us to get very precise ages for the stars, which are important in determining the chronology of when events happened in the early Milky Way,’ said paper author and astronomer Mathieu Vrard, also of Ohio State.

The team also factored in data from the APOGEE spectrographic survey — conducted from the Apache Point Observatory in New Mexico — which can provide information on the chemical composition of stars, which can be used as an aid when determining stellar ages.

By calculating the age of the Milky Way’s stars, the researchers determined, for the first time, that those thought to have been captured from the Gaia Sausage collision are similar or slightly younger in age than most of our galaxy’s native stars.

According to Dr Vincenzo, violent mergers between galaxies inherently shake things up, with the merger having acted to make the orbits of the stars already in our galaxy more eccentric than they had been previously.

He added that the movement of the stars was akin to a dance, one in which those from the Gaia Sausage galaxy move differently to those forged in the Milky Way — and also, he noted, sport different chemical compositions. 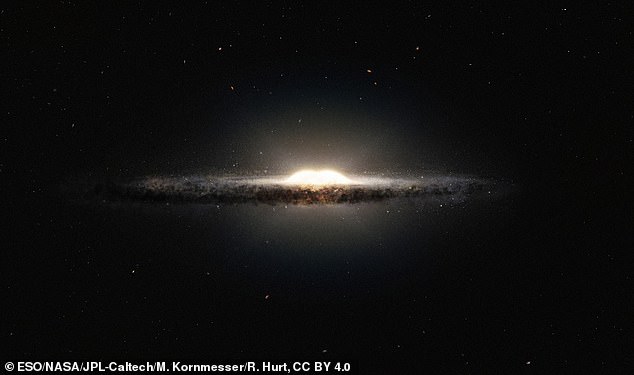 By calculating the age of the stars in the Milky Way (pictured), the researchers were able to determine, for the first time, that those thought to have been captured from the Gaia Sausage collision are similar or slightly younger in age than our galaxy’s native stars

With their initial study complete, the researchers are now planning to take their analyses further.

‘We now intend to apply this approach to larger samples of stars, and to include even more subtle features of the frequency spectra,’ Dr Vincenzo said.

‘This will eventually lead to a much sharper view of the Milky Way’s assembly history and evolution, creating a timeline of how our galaxy developed.’

The full findings of the study were published in the journal Nature Astronomy.