Milky Way Photographer of the Year: Stunning winning photos for 2021 are revealed

Spectacular photographs of the Milky Way — seen dwarfing volcanoes, waterfalls and churches on Earth — show our galaxy in fascinating and rarely-seen detail.

Released by travel photography blog Capture The Atlas, the 25 images capture the stars as a scintillating backdrop to trees, lakes and cliffs, as well as deserts, coastlines and snow-covered vistas.

They have been nominated for the website’s annual ‘Milky Way Photographer of the Year’ compilation, which is held in late May or early June to coincide with the peak of the Milky Way season.

‘Mt. Taranaki Milky Way’ — by Larryn Rae at Fanthams Peak, Mt. Taranaki in New Zealand. Ms Rae said: ‘This is one of the most challenging shots I have ever captured, as it required climbing for four hours in 40mph winds to reach the ice summit of Fanthams Peak — a volcano on the side of Mt Taranaki. I am so stoked to have captured what I did under perfect clear skies’ 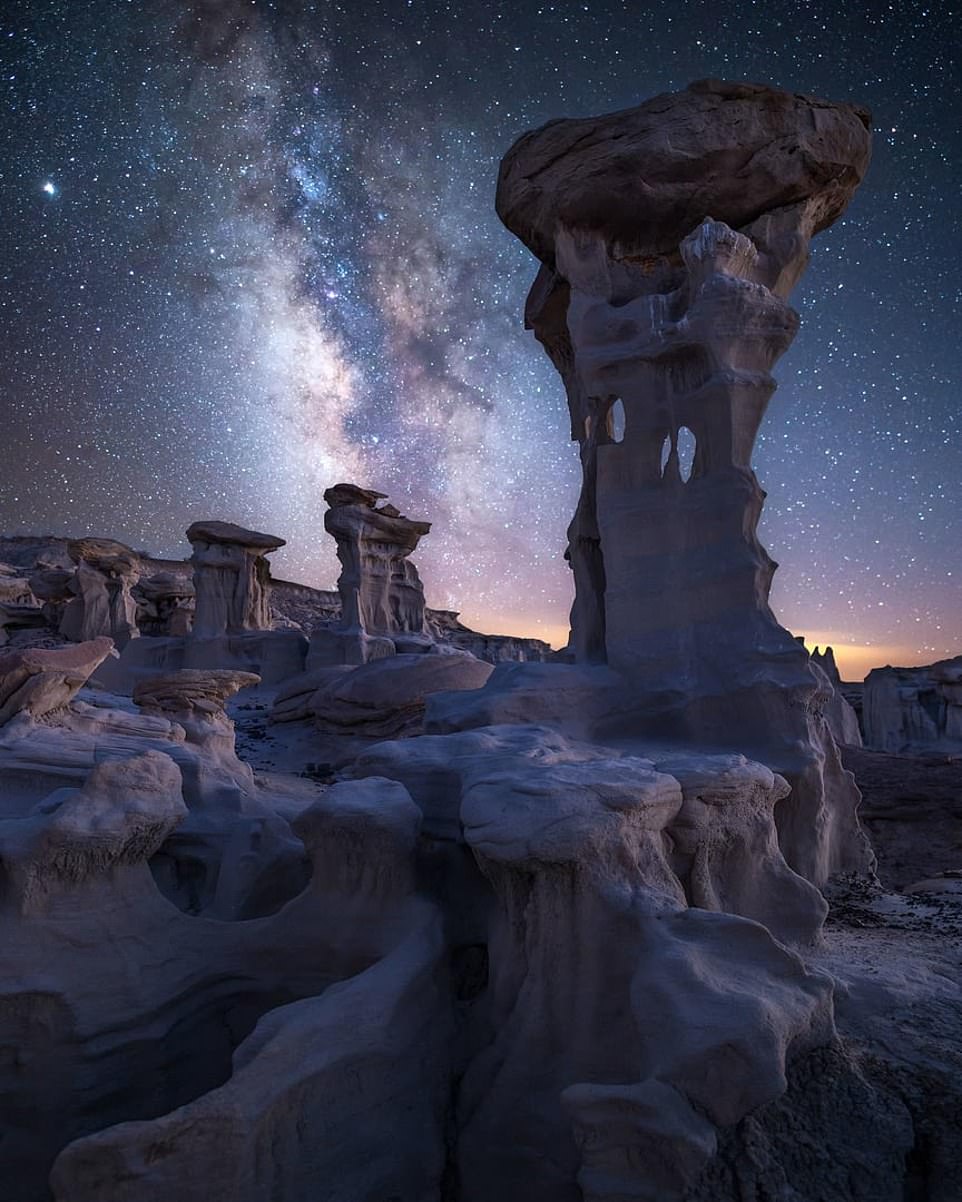 ‘Navajo nights’ — by Christine Kenyon in Bisti Badlands, New Mexico, USA. Ms Kenyon said: ‘With the silhouette of my Navajo guide nearby, I shot the foreground as blue hour washed over this ancient land, then watched with joy as the stars coursed through the heavens above. When the Milky Way rose into prominence and settled where I had hoped, I exposed for the sky to complete this blend’ 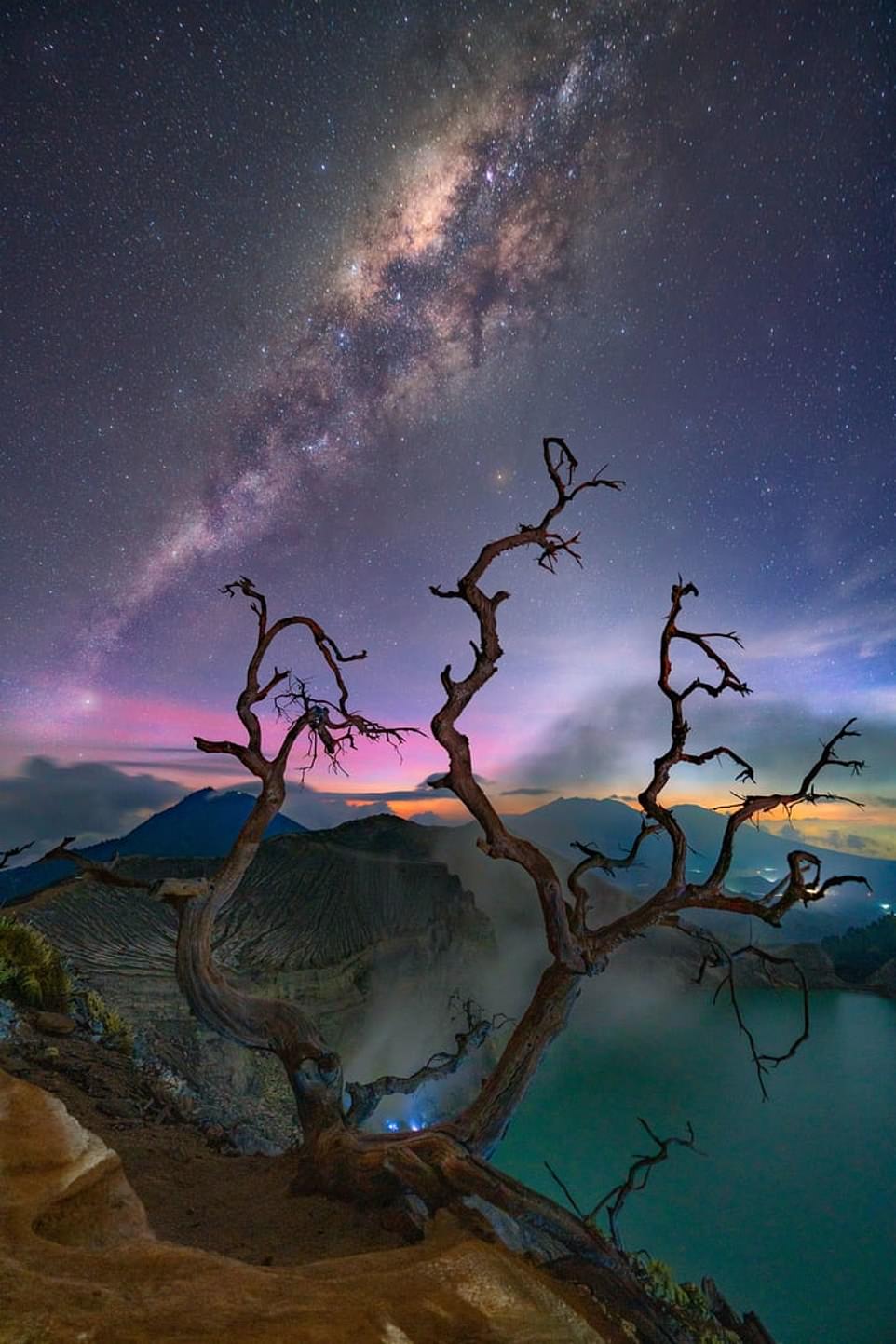 ‘Around dead trees’ — by Gary Bhaztara in Java, Indonesia, who said: ‘I took this shot of the Milky Way facing south after the sun set in the west. At the same time, the blue fire was burning just below the mountain while the Milky Way kept rising’ 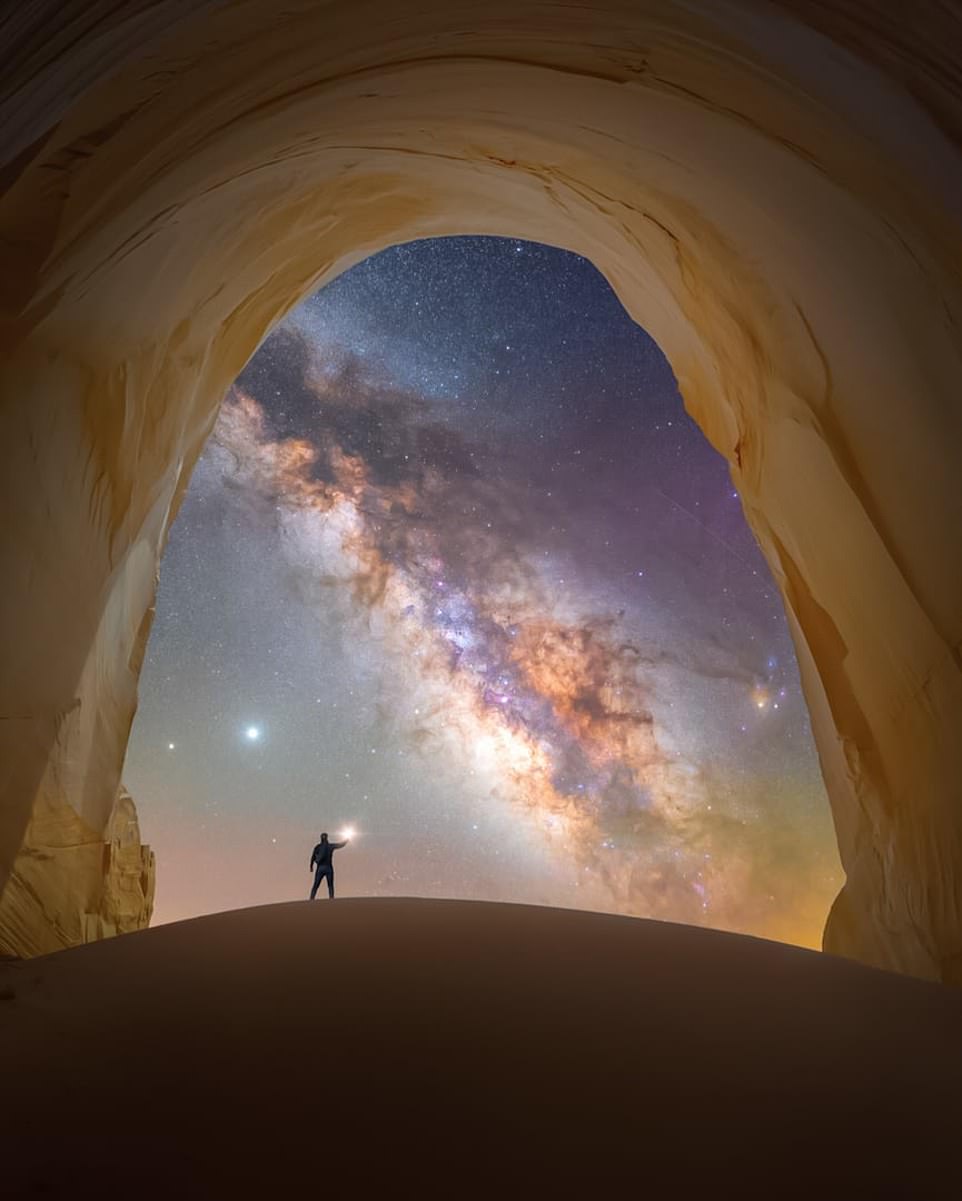 ‘Chamber of light’ — by Spencer Welling below a remote set of cliffs in Grand Staircase-Escalante in Utah, USA. Mr Welling said: ‘Due to its remoteness, this natural stone chamber provides some of the clearest, most pristine views of the Milky Way framed by the copper-coloured opening of the cavern’ 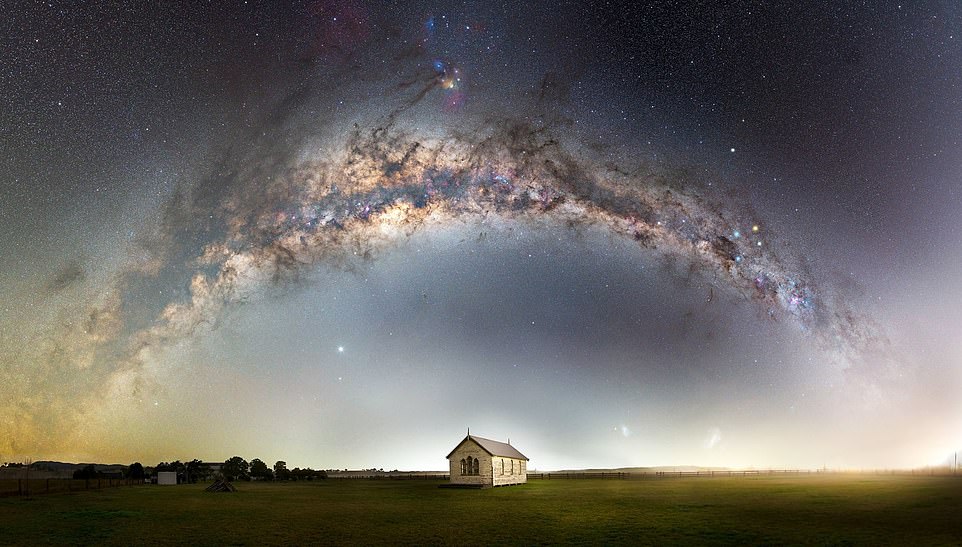 ‘Heavens above’ — by John Rutter. It shows fog clearing to reveal an old church in a paddock in Hunter Valley, New South Wales, Australia. Rutter said: ‘That night, the forecast was for terrible weather, so I had written the night off and went home. To my amazement, the skies cleared and it was a race to get back to the location and start shooting!’

The images were taken all over the world, including at an Alpine lake in Switzerland, a Greek observatory and an emerald cove on the Californian coast.

The shots were submitted by 25 photographers who hailed from 14 different nationalities. 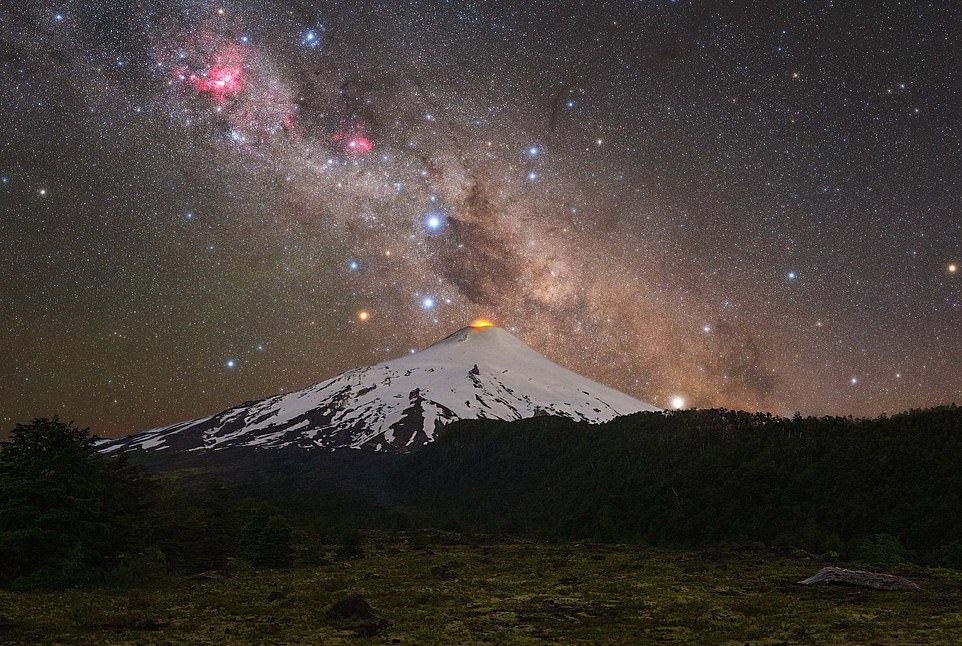 ‘Volcano and cross’ — by Tomas Slovinsky in Villarrica Volcano, Chile. Mr Slovinsky said: ‘In the upper left corner, there’s a night sky gem: the red-coloured Carina Nebula. This is also only visible in the Southern Hemisphere and, even though it’s visible to the naked eye, with a pair of binoculars, we can see all the beautiful details’ 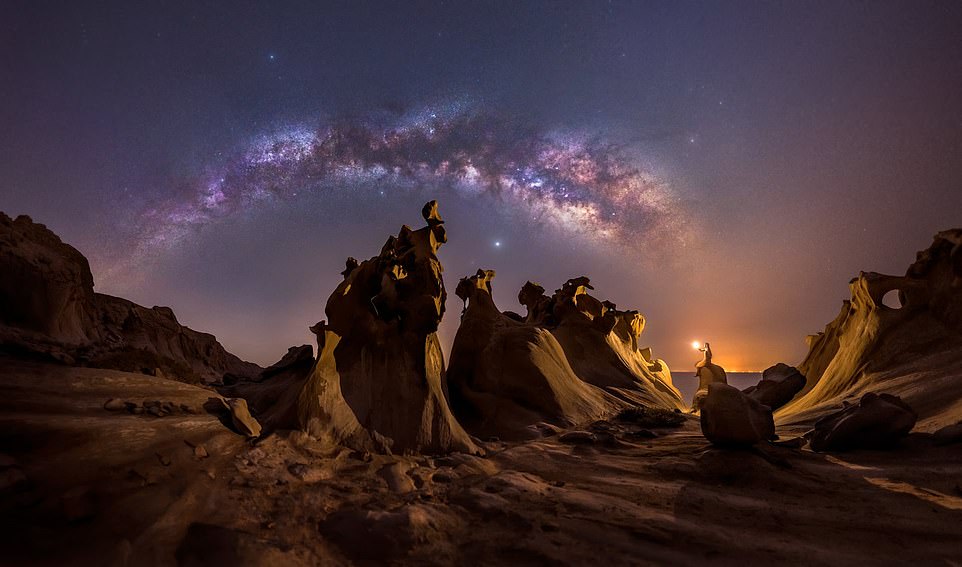 ‘Night lovers’ — by Mohammad Hayati, capturing the Milky Way rising on a spring night on the Persian Gulf coast in Hormozgan Province, Iran. Mr Hayati said: ‘I’m a nightscaper who tries to achieve an artistic look in my images, and in this image, I tried to convey and capture the magic of this location’ 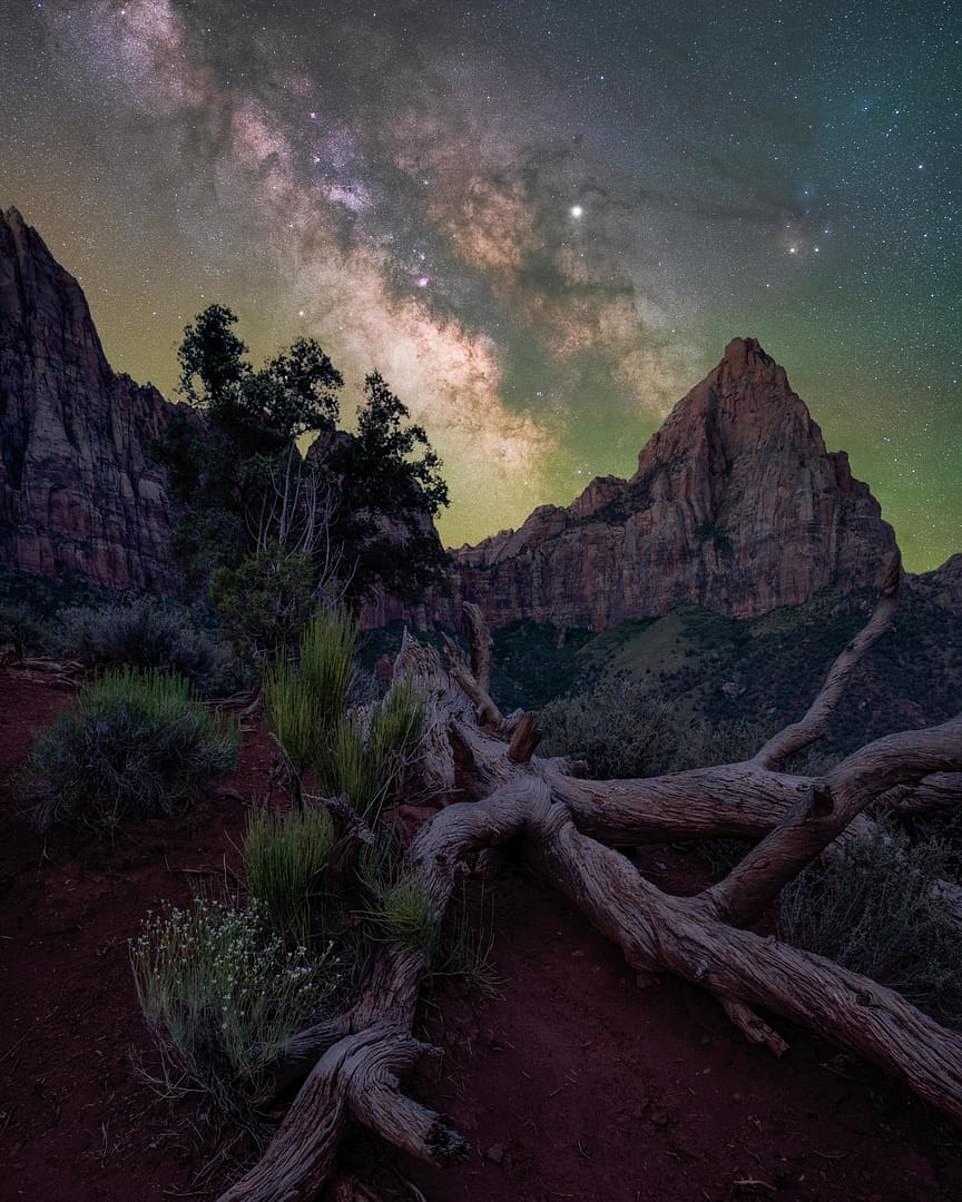 ‘The watchman’ — by Brandt Ryder of ‘The Watchman’ mountain summit in Zion National Park, Utah in the USA. Mr Ryder said: ‘Utah’s dark skies are a mecca for astrophotographers from around the world… after some exploring, I came across this twisted skeleton of an old juniper framing ‘The Watchman’. When I noticed how the angles of the tree matched the peak near perfectly, I knew I had found something special’ 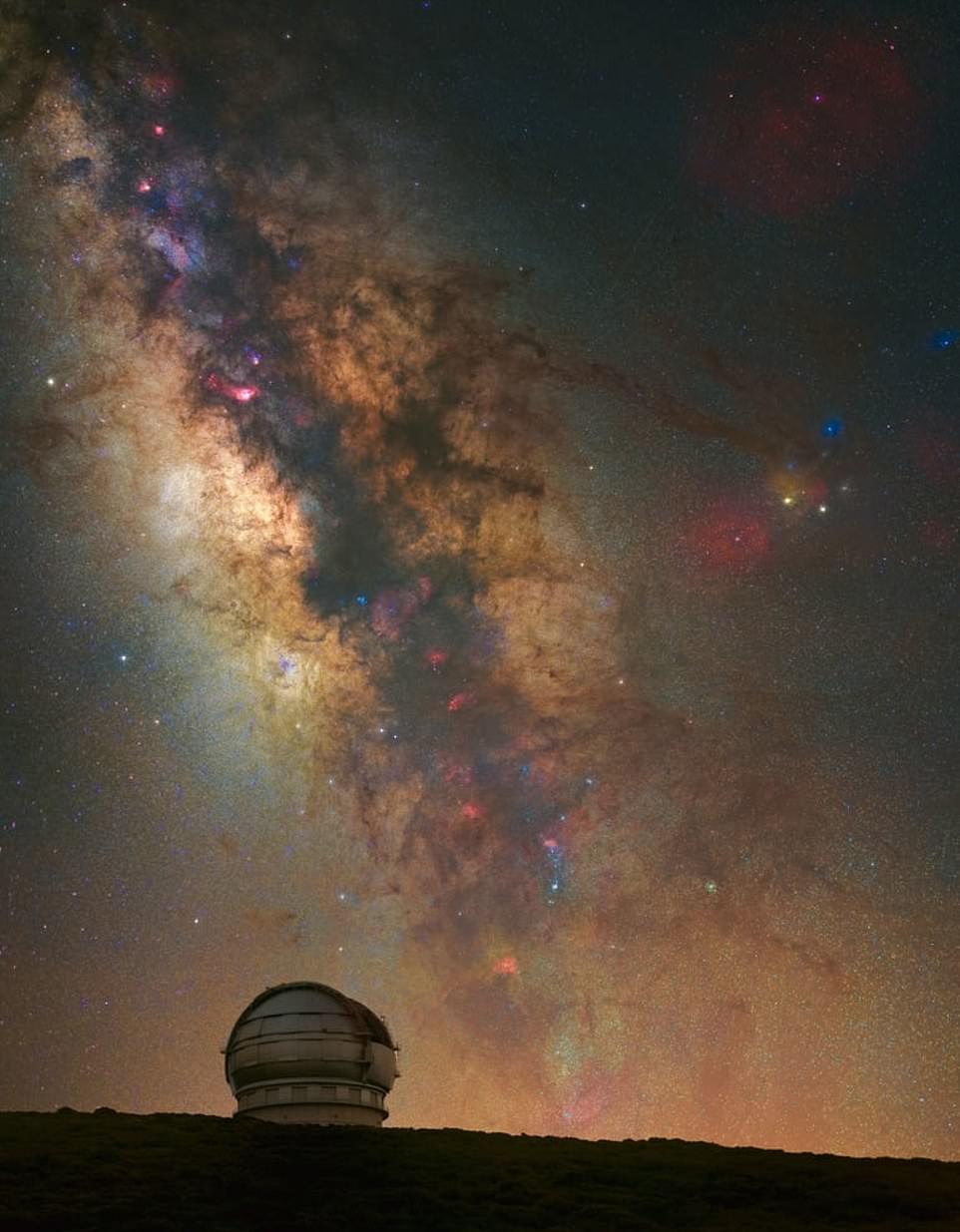 ‘GranTeCan’ — by Antonio Solano in La Palma in the Canary Islands. Mr Solano said: ‘On the last night of my trip to La Palma, I went up to the “Roque de los Muchachos,” where I enjoyed a nice dinner with my girlfriend while watching the spectacular sunset over the sea of clouds that is typical of this location’

‘Rising from the dust’ — by Lorenzo Ranieri Tenti in Tenerife, Canary Islands. Mr Tenti said: ‘This photograph was taken in Teide Volcano National Park on the island of Tenerife and shows our beautiful galaxy over an incredible volcanic landscape — a real night-photographer’s wonderland!’

The quality of the image, the story behind the shot, and the overall inspiration that the photograph can provide are the main factors for selecting the images every year, Capture the Atlas said.

‘To help you find inspiration for planning and executing your Milky Way images, we’ve gathered the best Milky Way images taken around the world, as we do every year,’ the travel photography blog announced on its website.

‘Buckle up because this trip is going to take you from the remote deserts of the American Wild West to the unfamiliar landscapes of the Australian Outback, passing by spectacular glaciers, volcanoes, mountains, beaches…always with the Milky Way shining in the sky.’

‘Our Lady of the Snows’ — by Uroš Fink in Velika Planina, Slovenia. Mr Fink said: ‘I had been planning this panorama for quite some time, and as soon as I had the opportunity, I didn’t hesitate and went for it. This area is also known for the wooden shepherds’ huts. In the centre of the panorama, the protagonist is the chapel “Our Lady of the Snows” ‘ 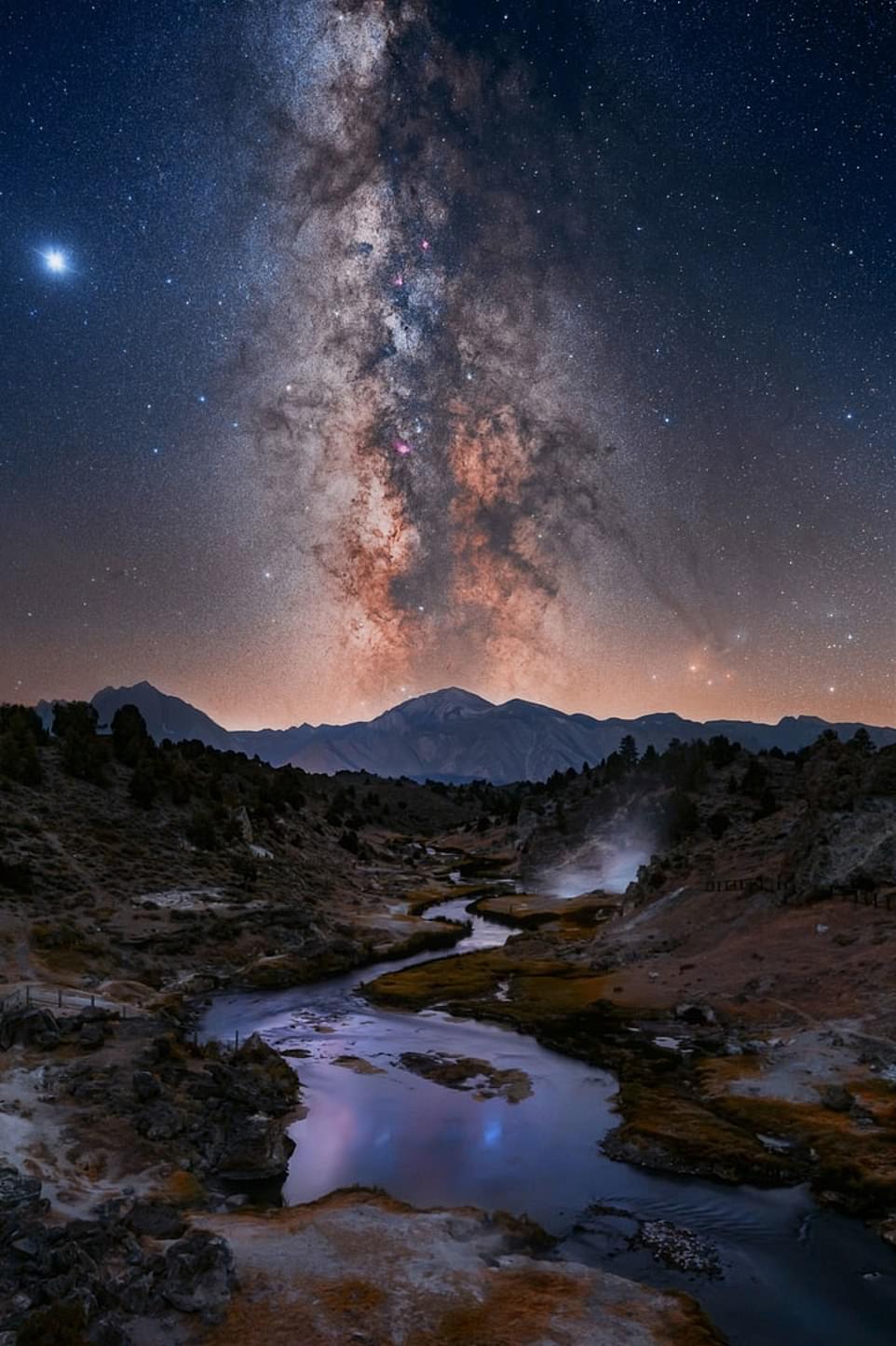 ‘When all the stars align’ — by Kelly Teich in Mammoth Lakes, California. Ms Teich said: ‘This particular location, near Mammoth Lakes, is a unique spot where the vertical alignment of the Milky Way’s Galactic Core sits perfectly over a mountain peak and a creek with natural hot springs flowing into it. You really couldn’t ask for a better foreground to work with!’ 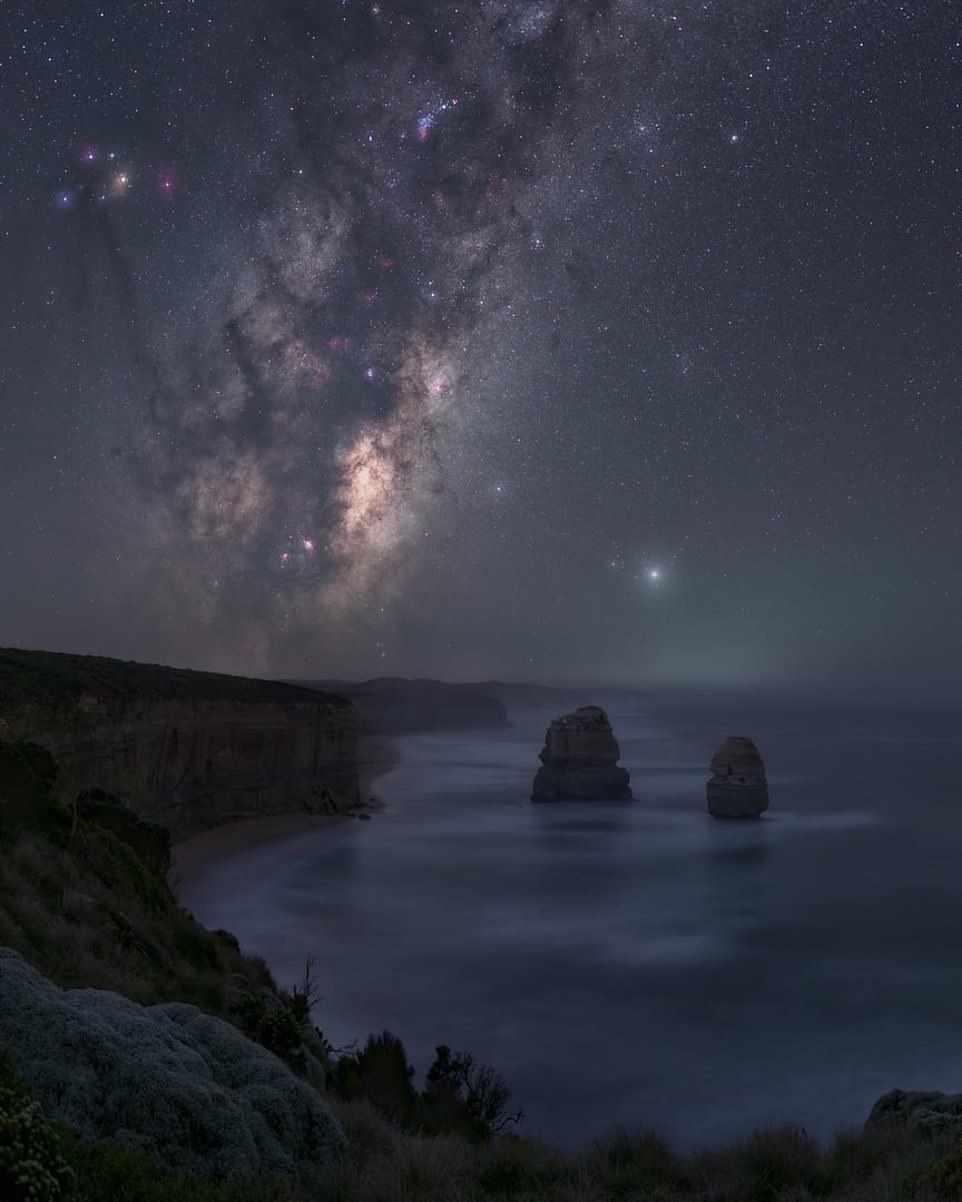 ‘Nyctophilia’ —  by José Luis Cantabrana in Great Ocean Road, Victoria, Australia. Mr Cantabrana said: ‘This incredible location has always amazed me, even before I had any interest in photography. This set of rocks, carved by the incessant churning of the sea and the powerful wind that whips the south coast of Victoria is, without a doubt, the most emblematic landscape of Australia’ 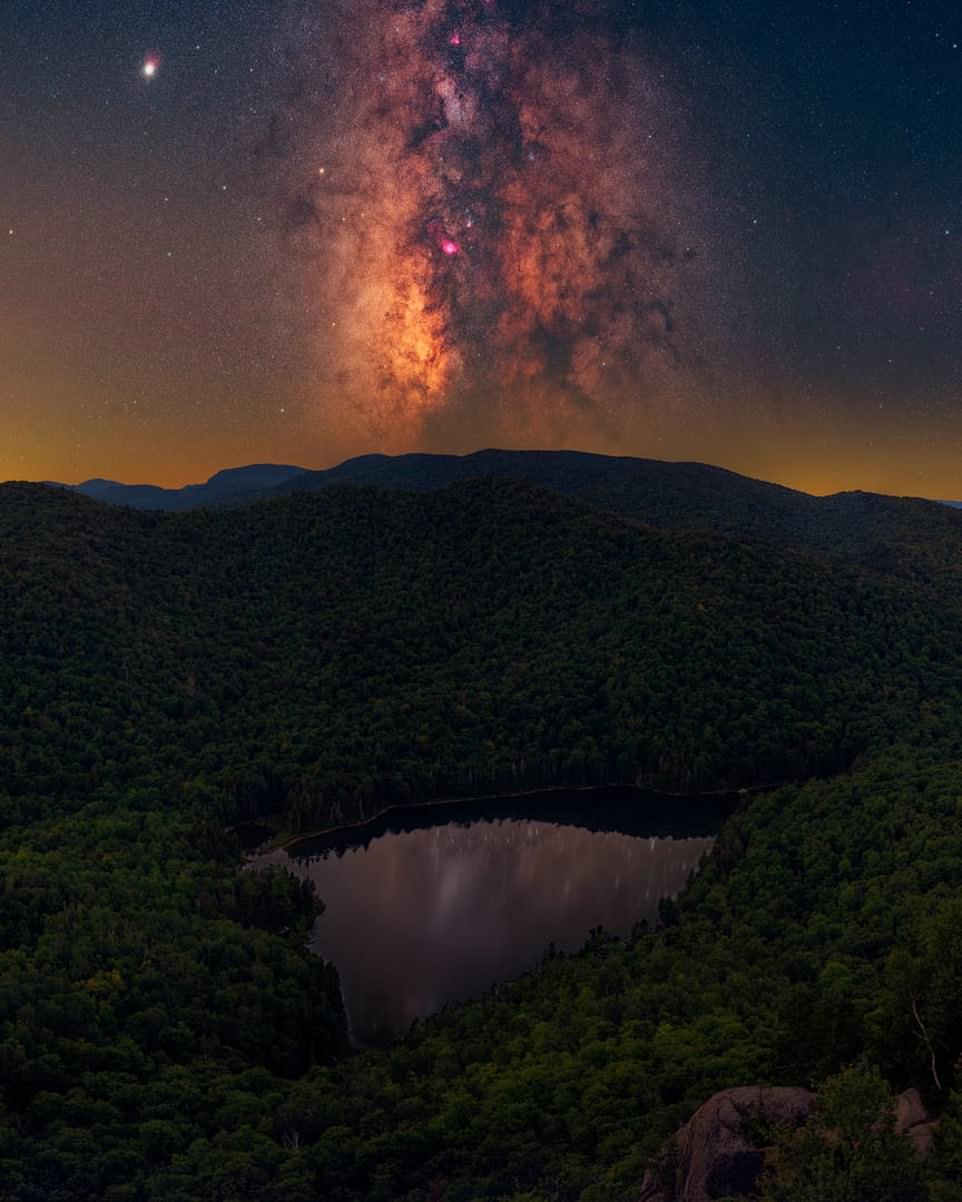 ‘ADK Magic’ — by Daniel Stein in the Adirondack Mountains, New York. Mr Stein said: ‘Tucked away in upstate NY, the Adirondacks region consists of six million acres of land designated as “Forever Wild”. It is home to some of the last known darkest skies on the East Coast. I feel like I am home when I am hiking in the Adirondacks. This shot, then, captures the magic which I feel fills my heart when I am there. Not only does it consist of a lake which seems to take the formation of a heart itself, but it also shows just how much the East Coast has to offer: beautiful woodlands combined with still water and rolling hills’ 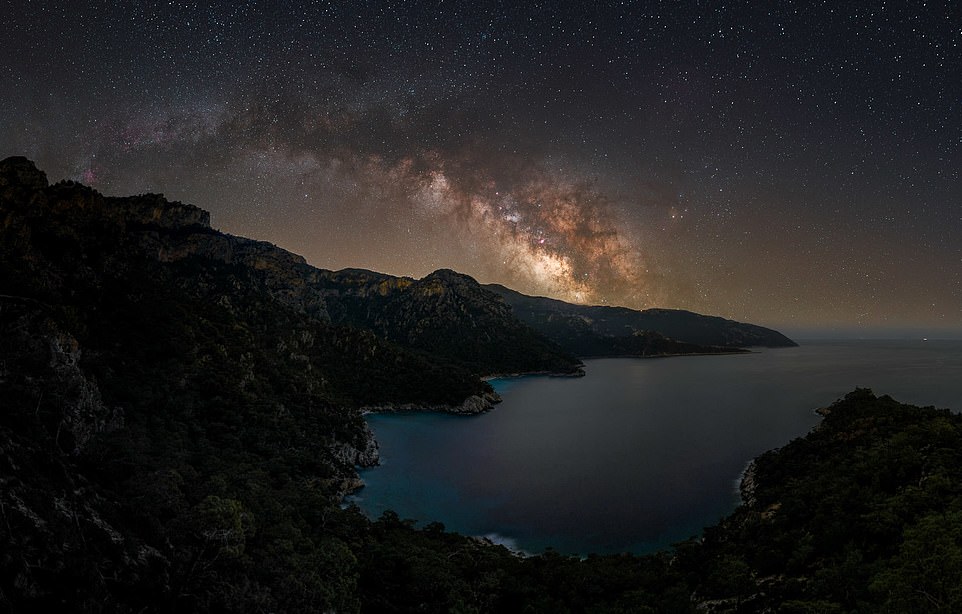 ‘Paradise Beach’ — by Alyn Wallace in Lycian Way, Turkey. Mr Wallace said: ‘I spent the pandemic in a remote valley on the southwest coast of Turkey trying to avoid the chaos of restrictions and lockdowns. Sitting on the mountainside enjoying this view of the Milky Way arching across the mountains whilst listening to the sound of the waves breaking gently below and the owls twitting through the valleys was just the kind of peace and solitude I needed’ 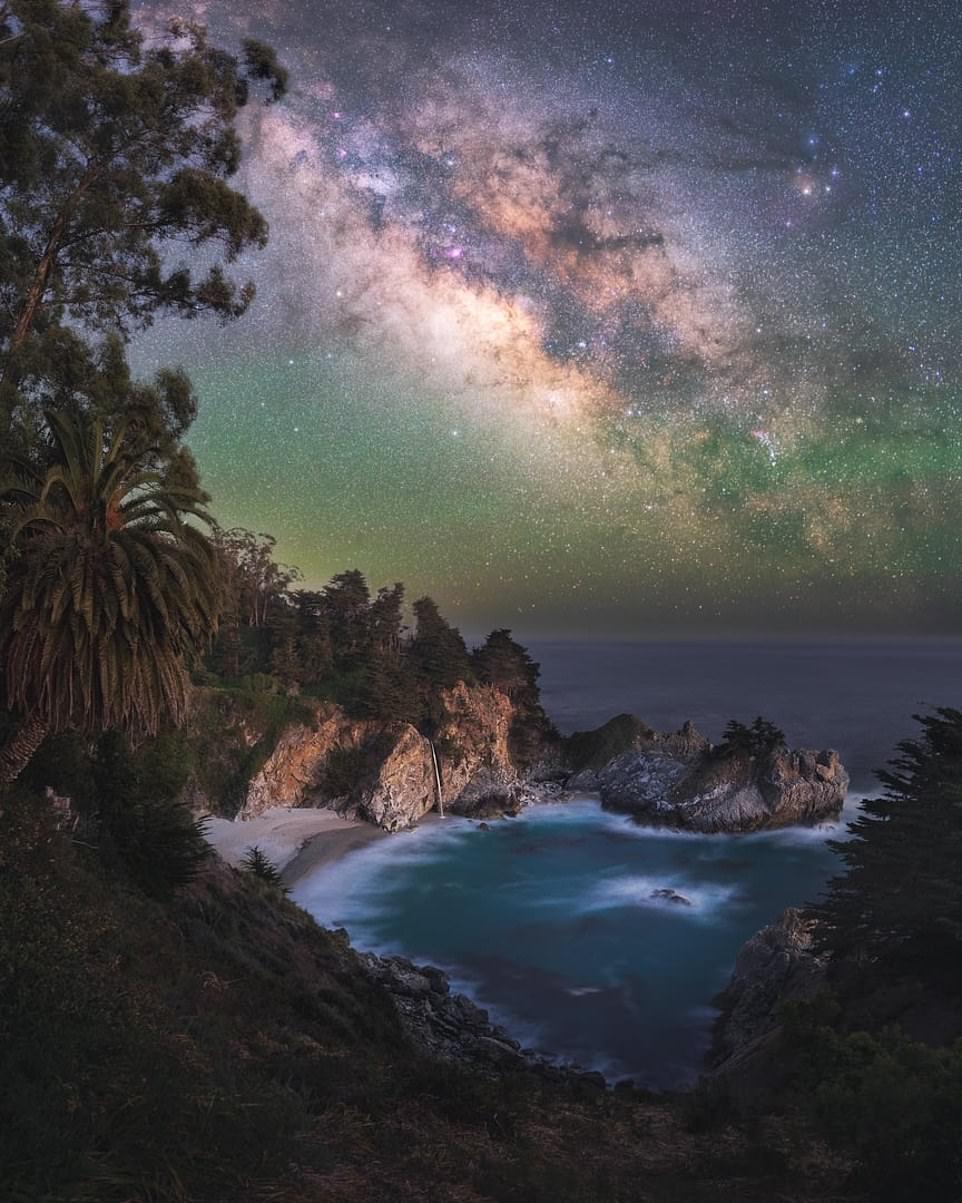 ‘Paradise’ — by Marcin Zajac in California. Mr Zajac said: ‘If I had to choose my favourite place on earth, this might be it. Located on the Pacific Coast near Big Sur, it really has everything: a beautiful cove filled with emerald waters, an 80ft waterfall that falls directly onto the beach, a palm tree that makes you feel like you’re on a tropical island, and a perfectly dark sky that shines bright with stars at night’

Capture the Atlas said they hoped the competition will help and inspire people to learn more about the galaxy.

For the full set of images and list photographers’ quotes visit the Capture the Atlas online gallery. 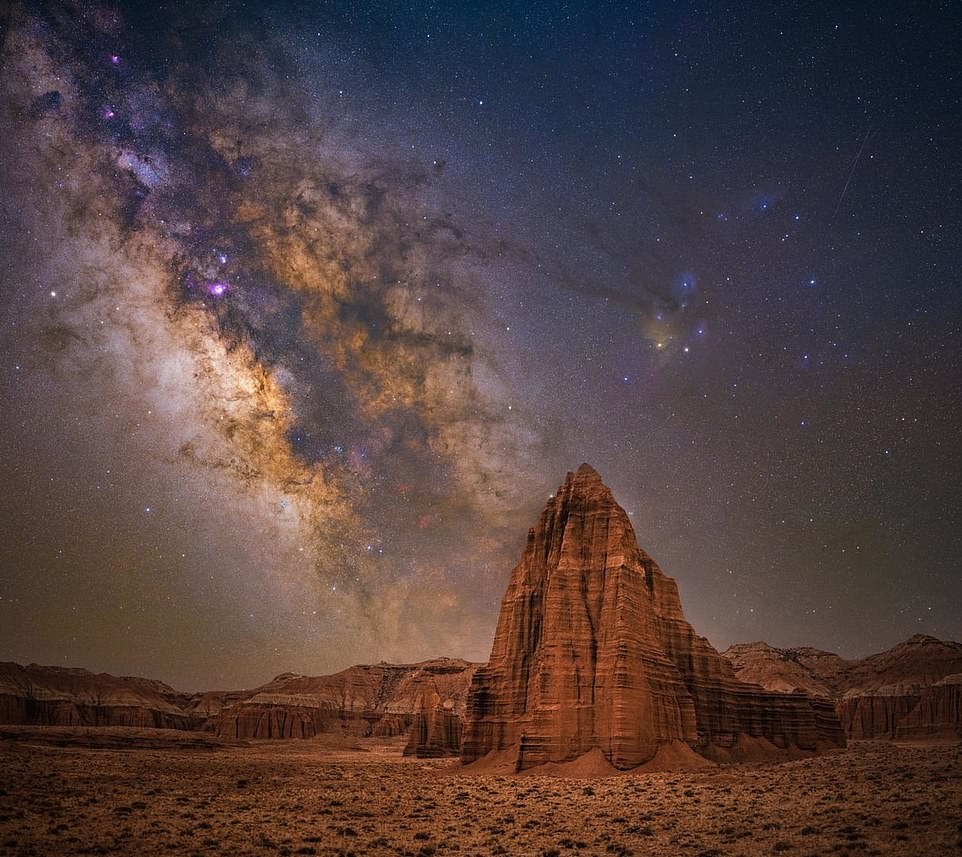 ‘Temple of the sun’ — by Bryony Richards in Capitol Reef National Park, Utah. Ms Richards said: ‘These Jurassic-aged sandstone monoliths, which formed as sandy mud on a tidal flat, tower above the otherwise flat desert floor. It seems like more than a coincidence that the Temples line-up perfectly with the Milky Way, their vibrant orange colours seemingly reflecting the colour of the stars above’ 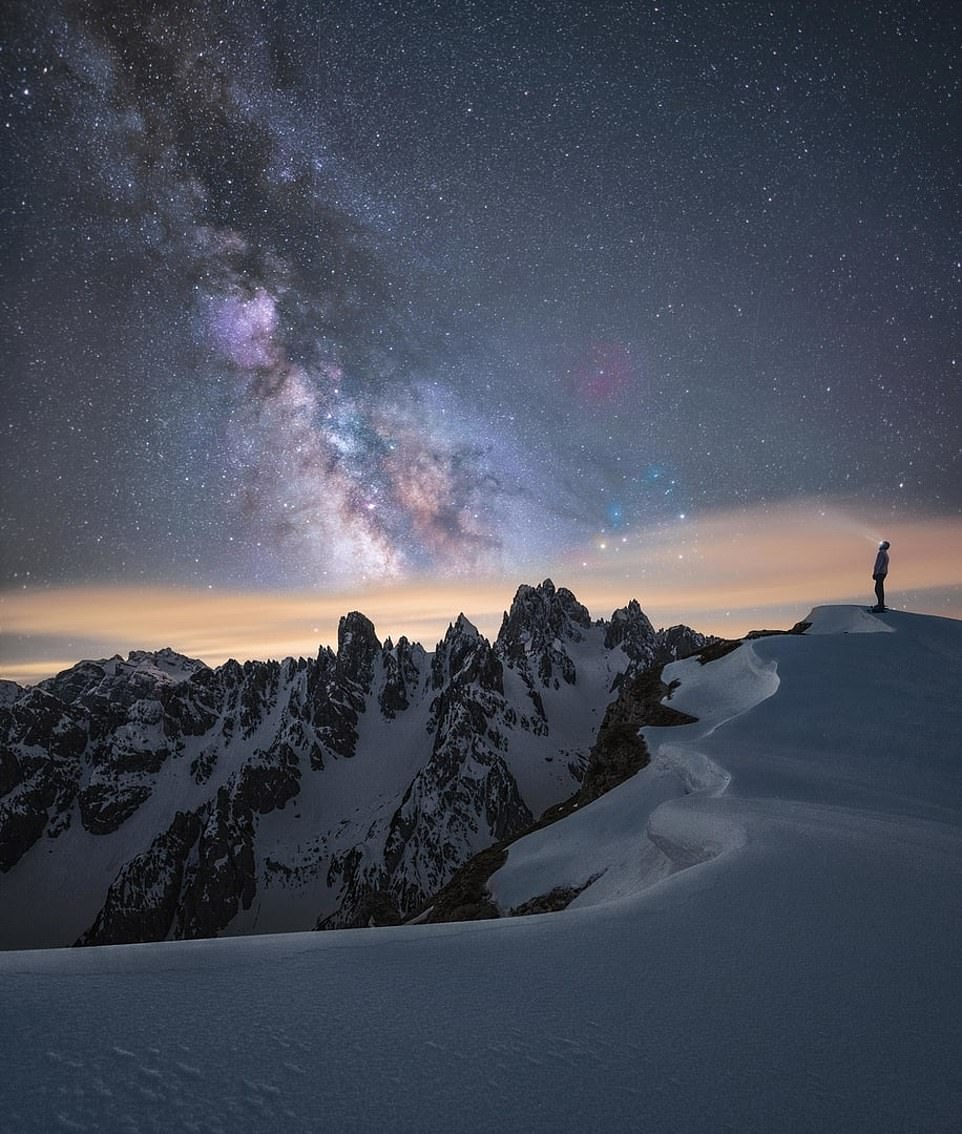 ‘Cadini di Misurina’ — by Stefano Pellegrini in Cadini di Misurina, Dolomites, Italy. Mr Pellegrini said: ‘This was from a great Milky Way trip in the Italian Dolomites, although there were some challenges because of the weather. First of all, I took this picture in May when the snow had almost melted, so I had to make the ascent to “Auronzo” on foot instead of by snowmobile. Also, the path was hard because I had walk it in the middle of a heavy snow storm’ 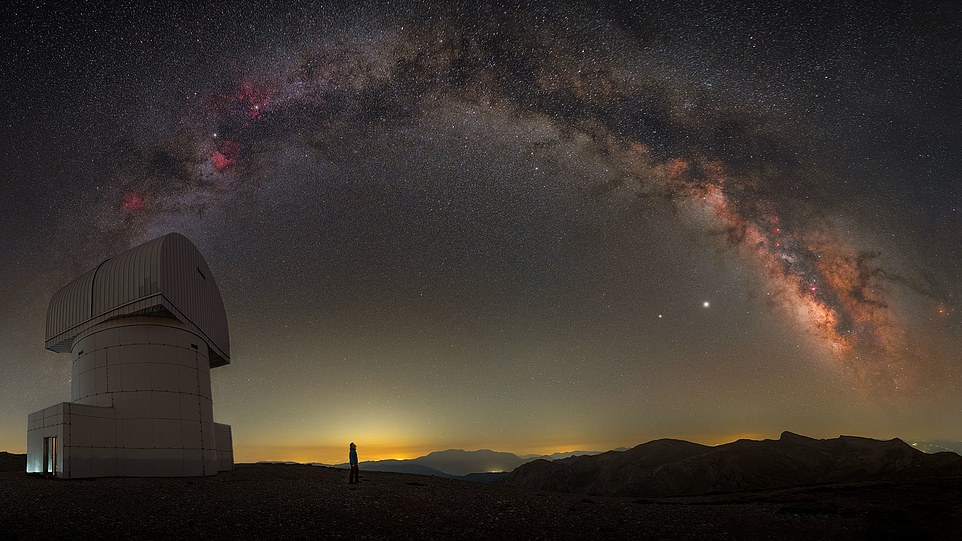 ‘Starry night at Helmos Observatory’ — by Constantine Themelis at the Helmos Observatory in Greece. M Themelis said: ‘Every time I look at this image, it blows my mind to see what you can capture with recent technology and how close you can get to the cosmos’ 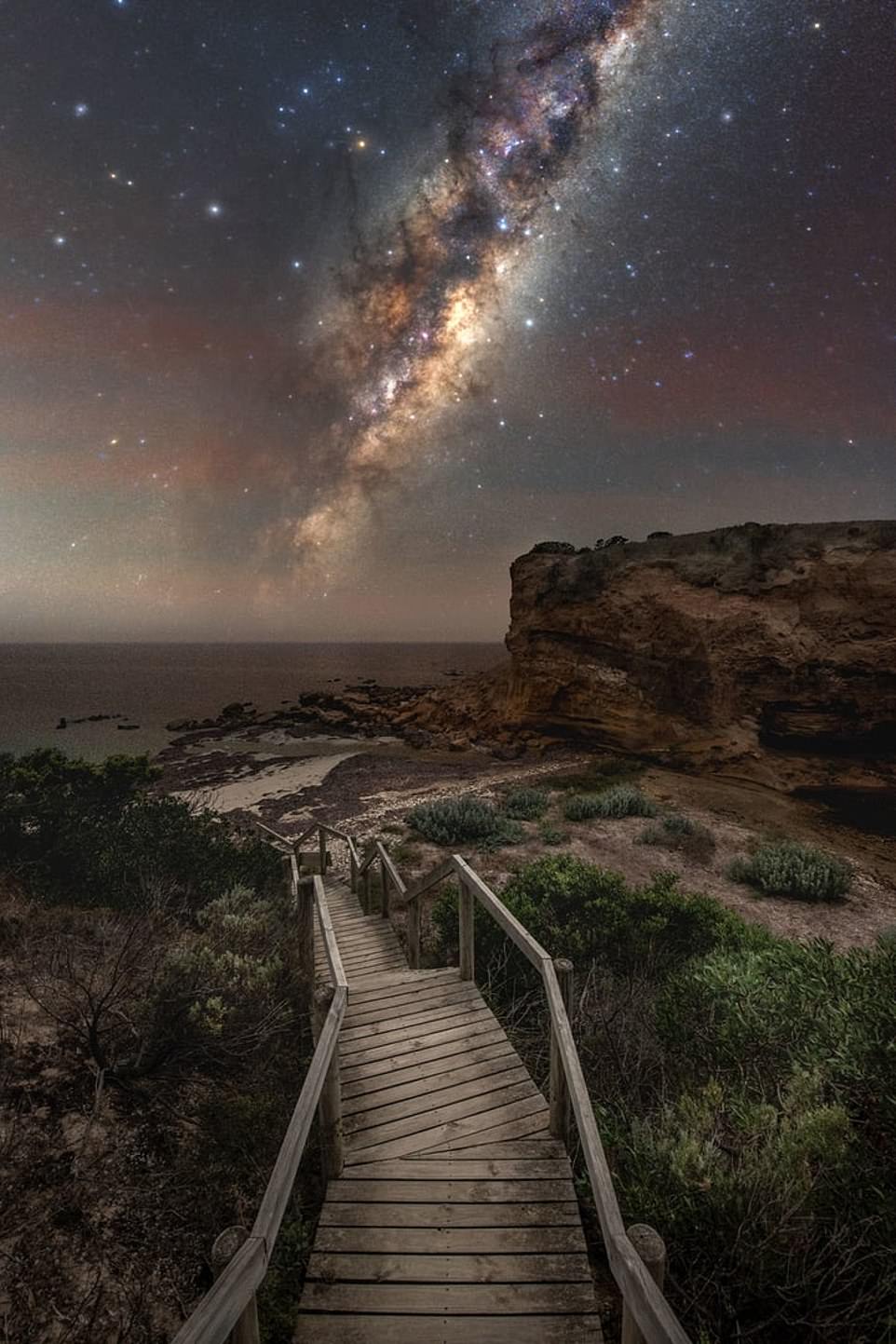 ‘The Forgotten side of Kangaroo Island’ — by ‘Blntpencil’ at Baudin Beach, Kangaroo Island, Australia. They said: ‘It is a capture of the rising galactic centre floating above the ocean and represents the way of life on the island “where people live at one with nature” ‘ 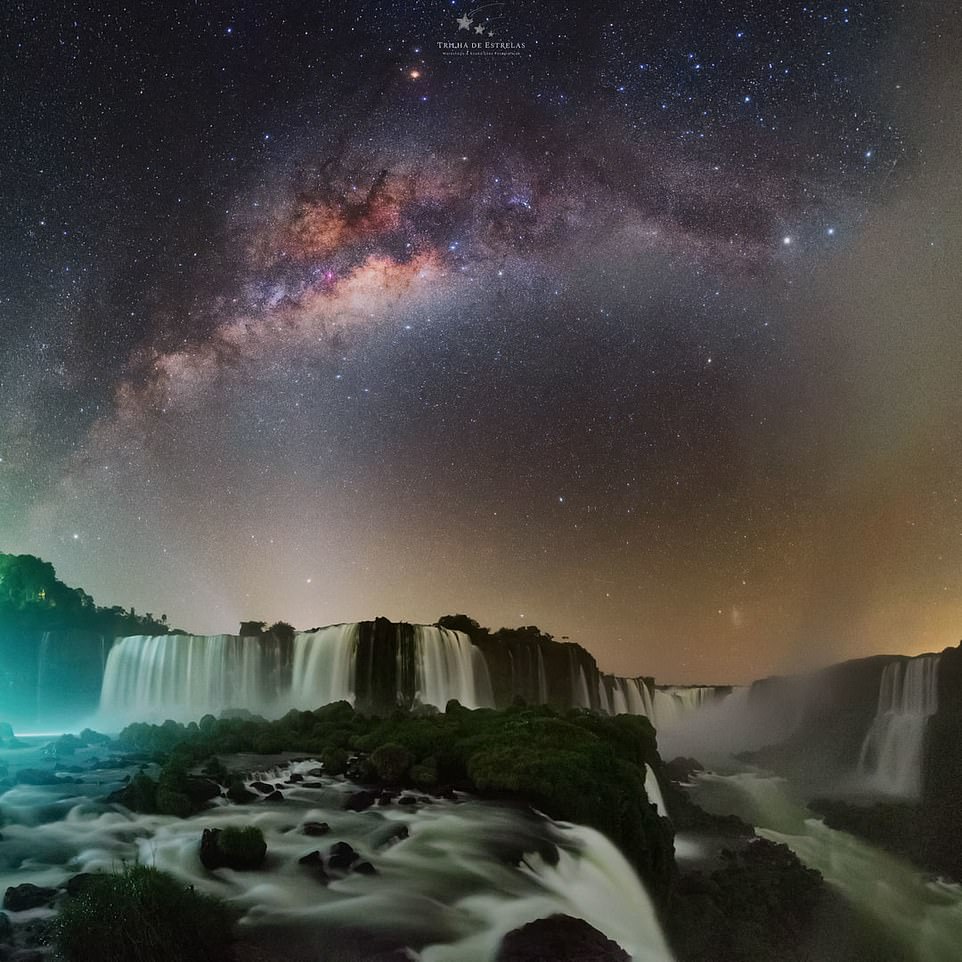 ‘Devil’s throat’ — by Victor Lima at Iguazu Falls, Brazil. Mr Lima said: ‘In this image, we have one of the main waterfalls of the Iguazu Falls complex, the “Santa Maria Jump”. Right over the fall, we can see Saturn and the zodiacal light illuminating the horizon. Further up there is the Milky Way Core’ 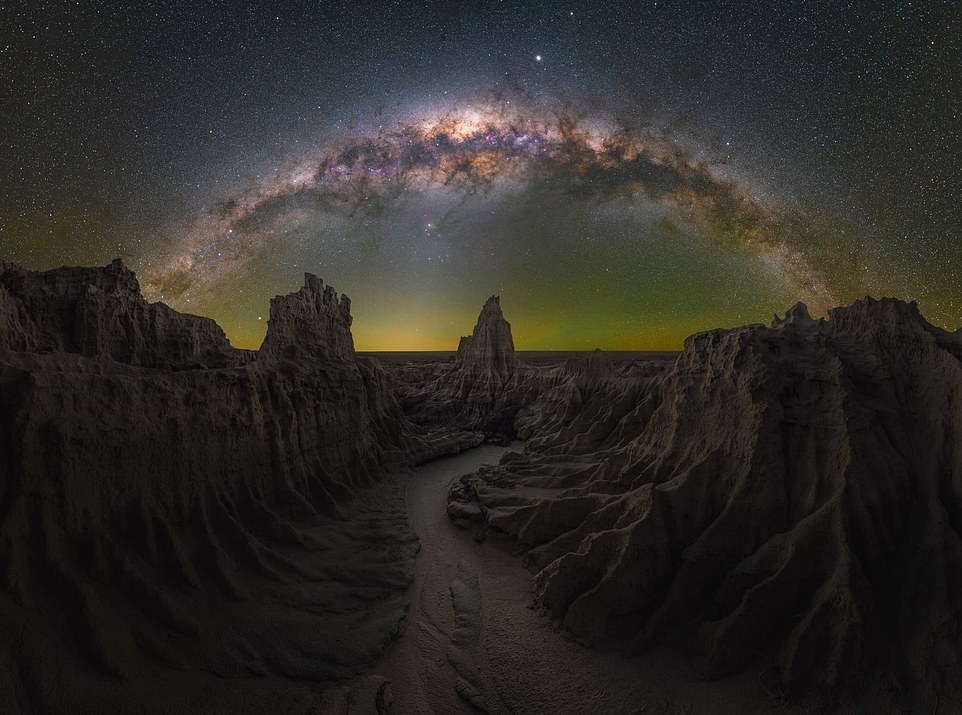 ‘Dragon’s Lair’ — by Daniel Thomas Gum in Mungo, New South Wales, Australia. Mr Gum said: ‘The moment I came upon this scene, I knew exactly what I wanted to the name the image. It was otherworldly — think Game of Thrones — and it lined up perfectly for how I wanted to capture it’ 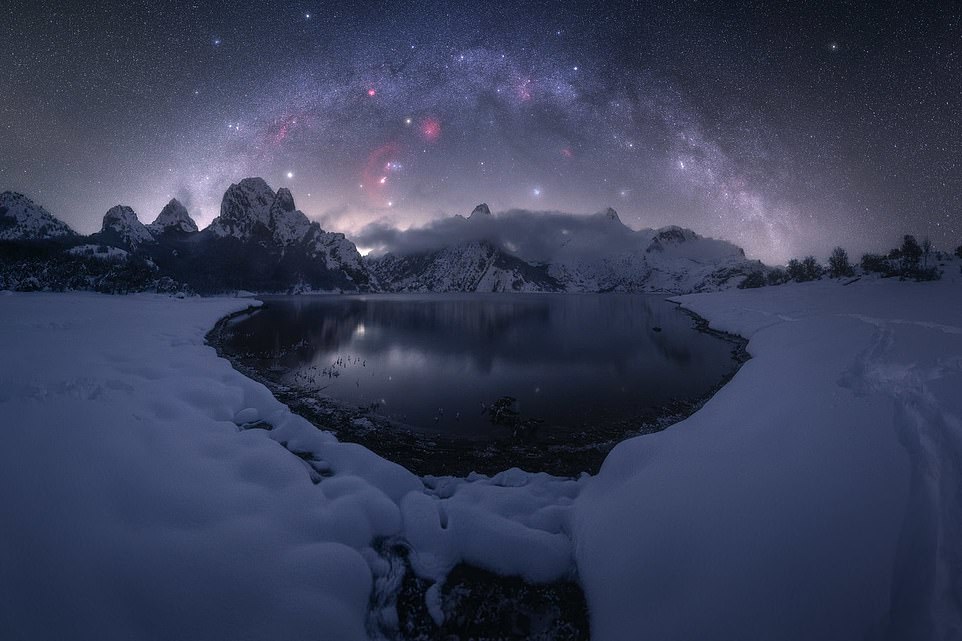 ‘Riaño’ — by Pablo Ruiz in Riaño, Spain. Mr Ruiz said: ‘I captured this image last winter in the Riaño Mountain Reservoir in Spain… The composition of the winter Milky Way over the mountains and the reservoir created magical scenery’ 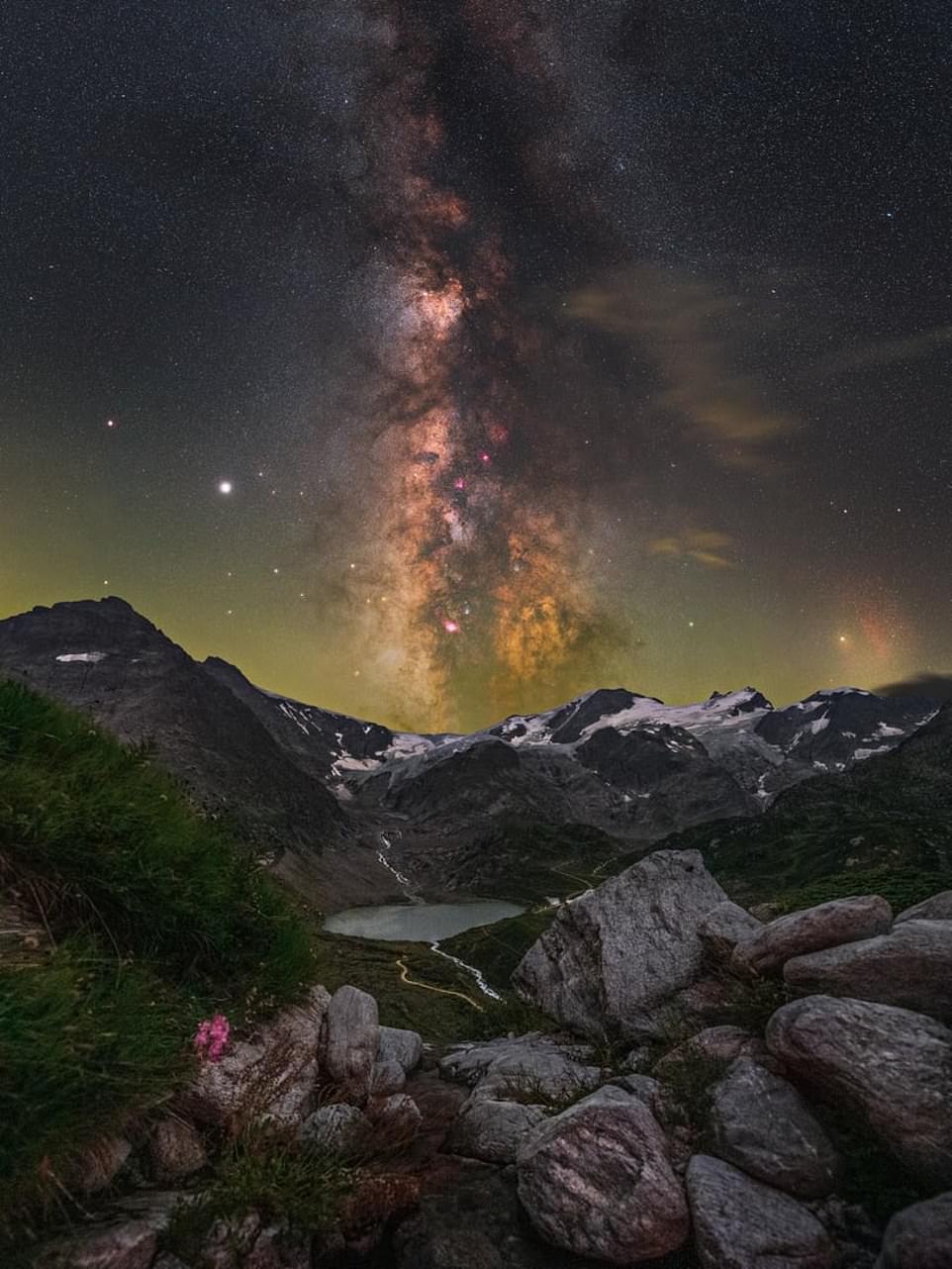 ‘Steinsee’ — by Benjamin Barakat in Susten Pass, Switzerland. Mr Barakat said: ‘This small Alpine lake is located in the Swiss Alps on a mountain pass. Most of the year, it’s closed due to snow but once it had cleared, I had to make my way there and capture the Milky Way’ 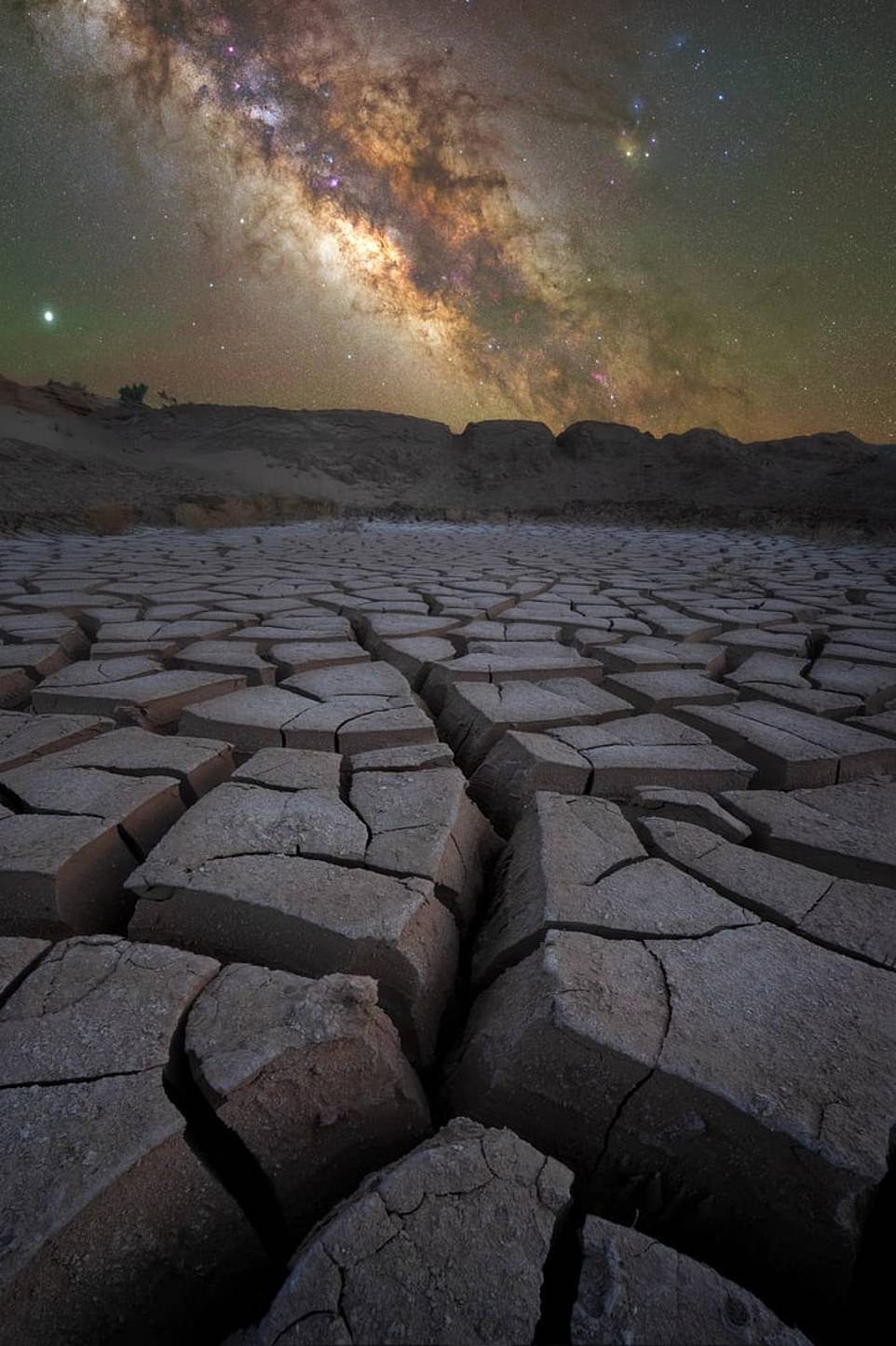 ‘Desolation’ — by Phil Sisto in the Capitol Reef National Park, Utah. Mr Sisto said: ‘This image was captured in the remote Cathedral Valley District of the park. I placed my camera low to the ground, exaggerating the otherworldly mud cracks with my wide-angle lens, and shot the sky with a longer lens as a panorama on my star tracker’