Millennials are more comfortable revealing their salary than any other generation

Millennials are more likely than older generations to reveal how much money they make to friends, family and even co-workers, according to a new survey.

At one time, discussing salaries was viewed as a taboo, but in the era of social media and the chronic overshare, Americans age 18-37 say they are more comfortable being transparent about their salaries, according to a survey of 1,017 people by Bankrate.

One-third of Millennials said they have told a co-worker how much money they make, while just 24 percent of Generation X and 18 percent of Baby Boomers have done the same.

‘Sharing salaries is still something that is taboo and that it’s not going away anytime soon because you salary reveals so much about you,’ Bankrate.com analyst Amanda Dixon told DailyMail.com.

‘But that notion could be changing, especially among young adults,’ she added. ‘They’re already used to oversharing on social media … so sharing their salary is something they would be more comfortable with.’

Millennials are more likely than all other generations to tell co-workers, friends and significant others about their pay check, as illustrated in this chart

Overall, 24 percent of all Americans have divulged their pay to a colleague – and men (29 percent) were more likely than women (20 percent) to do so.

‘When you’re ready to ask for a raise or negotiate your salary at a new job, knowing how much you’re earning relative to others can be helpful’ Dixon said.

However she cautioned that such overtures must be approached carefully, noting that, ‘Asking someone straight up, ‘how much do you make?’ is not that helpful.’

While women were less likely to reveal their income, there is a growing movement encouraging them to share their salaries with coworkers in the battle for gender wage equality. Nationwide, American women make 82 percent of what men are paid.

‘If women or people of color want to try to close their pay gap, information is absolutely the first thing you need,’ said Elise Gould, senior economist at the Economic Policy Institute. ‘By sharing that information yourself, the more likely it is other people will share their information with you.’

For people who want to share what they make with others – it’s not illegal and employers can’t retaliate against workers for doing so. The National Labor Relations Act of 1935 made it unlawful for employers to keep workers from talking about their wages and other compensation.

President Obama sought to use pay transparency to close the gender wage gap by requiring companies with 100 or more employees to submit workers’ salary and demographic data to the Equal Employment Opportunity Commission.

The goal was to better understand the pay gap – which worsens for women of color – and encourage employers to examine how it manifests within individual companies. However the Trump administration halted roll-out of the effort, which would have collected its first batch of data in March. 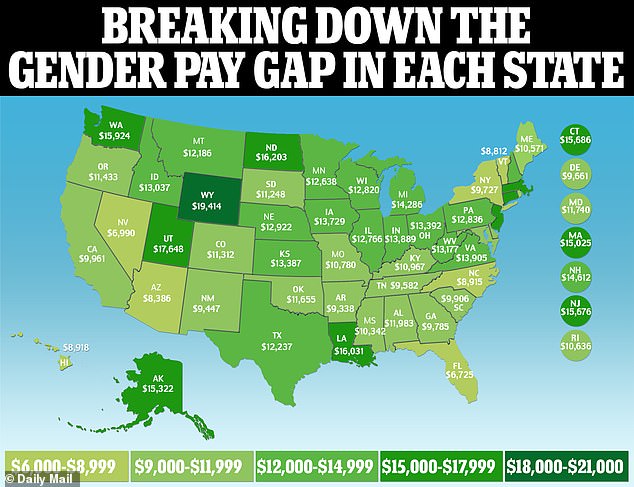 Nationwide, women make an average of 82 cents for every dollar a man is paid – but the gender wage gap varies dramatically from one state to the next. This map illustrates how much less women make than men in each state based on median incomes of both genders

Millennials were also most likely to reveal pay information outside of the workplace, with nearly half (48 percent) saying they’ve told a non-live-in romantic partner how much money they make. Generation X was close behind (41 percent), but just 29 percent of Baby Boomers have done the same.

On the flip side, 31 percent of Americans of all ages have never told a live-in romantic partner how much money they make – including 19 percent who are currently married or living with a partner.

‘Not telling your friends how much you make is one thing, but failing to share that information with a significant other could be a bad idea,’ added Dixon. ‘When you’re setting short-term or long-term financial goals, it’s impossible to be on the same page if you’re not open and honest about how much money is coming in.’

Lower earners and the less educated are the most likely to have withheld pay details in a serious relationship.

Meanwhile – among Americans overall – 38 percent have disclosed their salary to a non-live-in romantic partner, 44 percent have told a friend and 54 percent have shared with a family member who is not their spouse.

In addition, nearly two-thirds (64 percent) of Millennials say they have told a family member other than their spouse how much money they make.

That’s compared to 58 percent of Generation X and 43 percent of Baby Boomers who said they do the same.

More than half (58 percent) of Millennials have told a friend how much they earn, compared to 47 percent of Generation X and 33 percent of Baby Boomers.