New data shows that millennials have been the unluckiest generation in U.S. history after experiencing the slowest economic growth since entering the workforce.

The economic loss caused by the coronavirus pandemic has become yet another massive setback for the generation that already faced lower earnings than boomers and Generation Z.

Experts warn that they may never recover from the economic odds as their disappointing first years in the workforce have already resulted in lower wealth and delayed their major financial milestones such as home ownership.

The group, often categorized as people born between 1980 and 1997, was also among the hardest hit by the large job losses caused by the pandemic shutdowns, meaning yet more financial vulnerability.

5,556,000 millennials joined the unemployed between February and April 2020, according to data from the Federal Reserve Bank of St Louis. 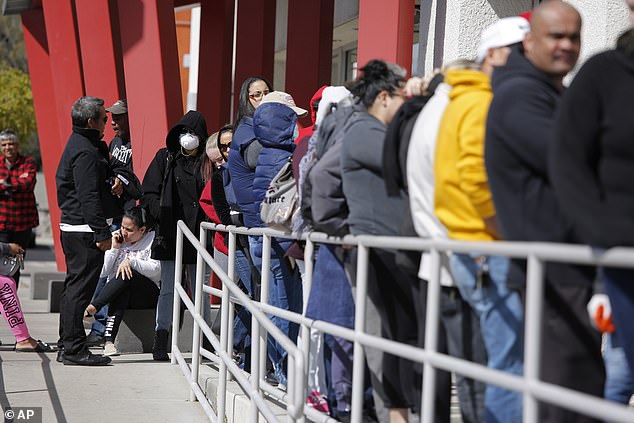 Between February 2020 and April 2020, jobs in the U.S. dropped from 152.5million to 131million. Pictured above in an unemployment office in Arkansas in April

Millennials were branded the ‘unluckiest’ by the Washington Post after data they compiled highlighted the massive disparity in growth in GDP since different generations have entered the workforce.

In their first fifteen years after joining the workforce at 18, the GDP grew at 16 percent for millennials by the time they were 33, compared to close to 40 percent growth experienced by Boomers.

The massive jobs losses in the past three months have also hit the industries in which younger people work the hardest, leading to great unemployment rates for the millennial and Gen Z generations.

The last time the number of jobs was this low was in January 2020 when older millennials were just coming of ages, all but eradicating the job growth they had seen since then.

In March and April of this year, millennial employment plunged by 16 percent while the younger Zoomers lost a third of their jobs. 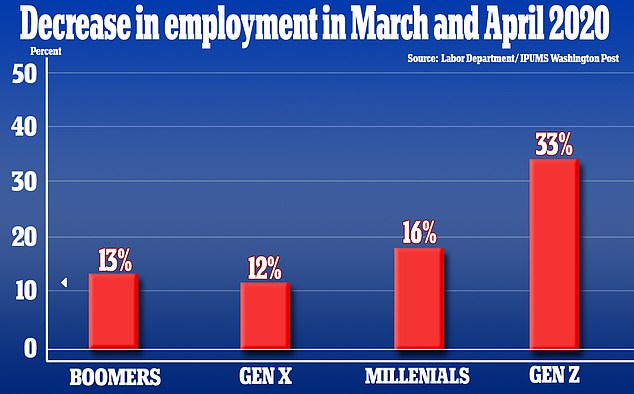 Younger generations were the hardest hit by recent job losses. Employment among Gen Z fell by a third and employment among millennials fell by 16 percent during March and April

The hit has meant that millennials may no longer take their place at the largest portion of the workforce, leaving Gen X again in the majority.

Experts have warned that millennials will find it hard to recover having already entered the workforce during the Great Recession, which lessened their income and left them unable to financially prepare for another economic downturn.

‘While national crises like this one hit all generations, I believe there are three reasons why many millennials (those born between 1981 and 1996) may be hit particularly hard,’ explained Ana Kent, a policy analyst at the Federal Reserve Bank of St. Louis, in a recent paper.

‘Will the typical millennial have to further delay major saving goals, including a home purchase, college tuition (for themselves or their children) and retirement? In other words, will this double-blow—Great Recession + Pandemic—be a devastating setback? 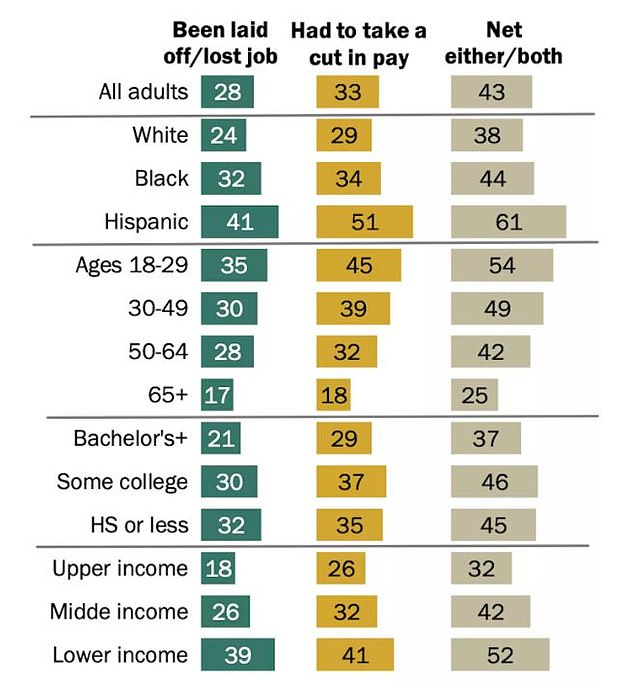 According to data from Pew Research Center, 54 percent of those aged 18-29 said they had lost their jobs or took a pay cut in a survey conducted in late April about coronavirus lay offs. The figure was 49 percent for those aged 30-49 but was not as high among older generations

‘Many of the recently unemployed millennials are the same young people who likely have fewer savings and wealth to fall back on when they lose their incomes,’ she added.

According to a paper from Census Bureau economist Kevin Rinz, millennial earnings never fulling recovered from the Great Recession.

Rinz found that, on average, millennials lost 13 percent of their earnings between 2005 and 2017, leaving them more vulnerable to another recession.

‘Most generations had seen some financial improvement a decade after the start of the Great Recession. Not so true for older millennials (those born in the 1980s), who were the only generation to have fallen further behind between 2010 and 2016,’ explains Kent.

‘If people enter the labor force during a recession, and they get into lower-paying jobs, that carries forward for much of their lifelong working careers,’ she added to the Post. 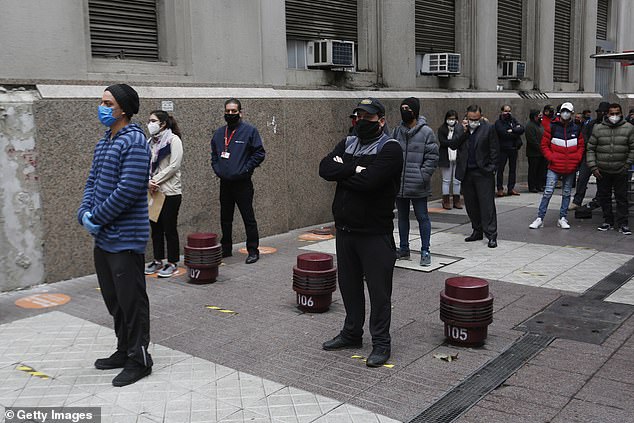 In March and April 2020, millennial employment plunged by 16 percent while the younger Zoomers lost a third of their jobs. Pictured, unemployed workers line up to do paperwork

The lack of earnings meant that millennials had less of a financial cushion when the massive job losses hit, despite showing more care than older generations to only spend what they earn.

‘This narrative of, “Oh you should just work harder, sink or swim by your own effort?” It’s very American, but it ignores the fact that the tide is much stronger now, and many millennials are swimming upstream,’ Kent said.

And it is having a harder effect on those millennials without a college education.

Kent found that millennials with a college degree aren’t far behind previous generations in terms of wealth even before the current pandemic, their less-educated peers have a bit more than half of the wealth they’d expect at this stage, based on previous generations.

‘Not every single millennial is going to be doing more poorly,’ Kent said.

‘Some millennials — particularly those who are black, Hispanic or women, or who have less than a bachelor’s degree — were already financially vulnerable going into the pandemic.’

This can be clearly seen in Kent’s analysis of U.S workers who would not be able to cover a $400 emergency expense.

‘For millennial families, the lack of a financial buffer is disturbingly common, ‘Kent writes.

‘About 1 in 4 families have negative net worth, meaning their debts outsize their assets. And roughly 1 in 6 say they would be completely unable to pay for a $400 emergency expense (i.e., not with cash, credit cards, borrowing or selling assets).

‘For those experiencing job loss, these emergencies can prove catastrophic without sufficient financial cushion.’ 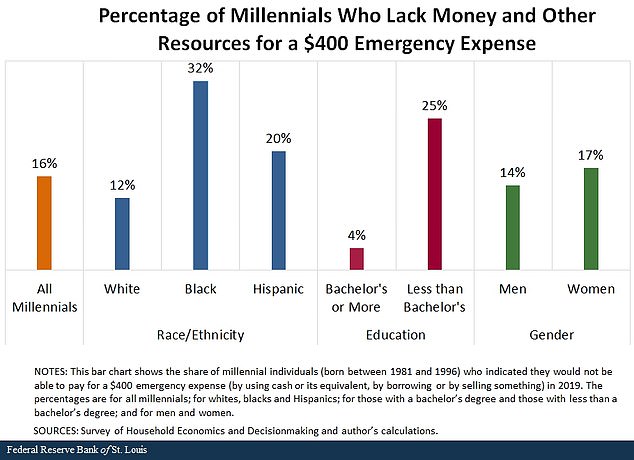 Roughly 1 in 6 millennials say they would be completely unable to pay for a $400 emergency expense, according to data compiled by the Federal Reserve Bank of St Louis

Kent does believe that there is room for recovery, however.

‘The good news, though, is that while not as young as they were during the Great Recession, millennials still have time to recover,’ she says.

‘Finally, with many millennials entering positions of power, policymakers may be prompted to think creatively about solutions to help financially strengthen not only this generation but also the ones that follow.’

More than 40 million new claims for unemployment benefits have been filed in the past two months ever since the coronavirus started paralyzing the US economy.

It is the 10th straight week that new claims have been above 2 million, figures released by the Labor Department on Thursday show.

While claims have declined steadily since hitting a record 6.867 million in late March, they have not registered below 2 million since then.

The unemployment toll caused by COVID-19 layoffs continues to rise with another 2.1 million American filing new jobless benefit claims last week. It is the 10th straight week that new claims have been above 2 million, figures released by the Labor Department on Thursday show 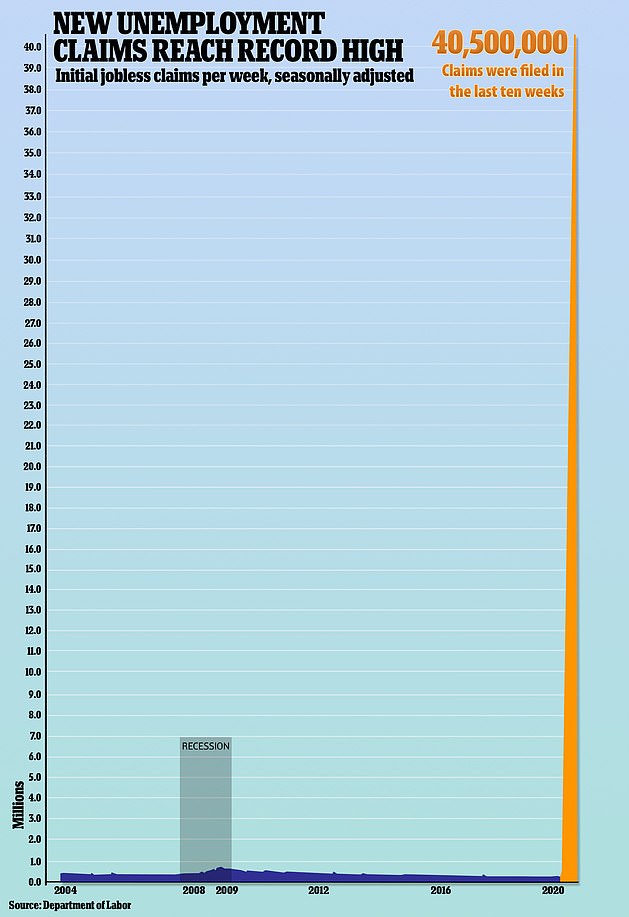 Although the total figure for claims in more than 40 million, not all of them are still unemployed. The number of people currently receiving unemployment benefits is 21 million, which is a rough measure of the number of unemployed Americans.

States are gradually restarting their economies by letting some businesses – from gyms, retail shops and restaurants to hair and nail salons – reopen with some restrictions.

As some of these employers, including automakers, have recalled a portion of their laid-off employees, the number of people receiving unemployment benefits has fallen.

The weekly jobless claims report, the most timely data on the economy’s health, is being watched to assess how quickly the economy rebounds after businesses shuttered in mid-March to control the spread of COVID-19 and almost ground the country to a halt.

The number of claims – stuck at an astonishingly high level even as non-essential businesses are starting to reopen – suggest it could take a while for the economy to dig out of the coronavirus-induced slump despite signs from the housing market and manufacturing that the downturn was close to bottoming.