Millennials are turning to witchcraft. Here’s why…

At first glance, if you scroll through Holly Cassell’s Instagram page it looks like any other millennial’s feed, filled with striking selfies, photos of her dogs and coffees from hipster cafés. But you’ll also see posts showing crystals, tarot cards, herbs, potions and spell books. This is because the 27-year-old full-time blogger and writer from Cardiff is one of a growing number of young women who are turning to witchcraft as a way to relax and ground themselves in turbulent times.

It’s not about devil worship and curses – these women, dubbed ‘Generation Hex’, cast spells to increase self-confidence, use tarot cards and astrology for spiritual guidance and perform rituals to enrich their lives, such as taking healing baths, lighting candles to banish negativity or repeating affirmations for self-love. And they’ve taken their craft online, turning it into a subculture in its own right. Using hashtags including #witchesofinstagram, women such as Holly share their spirituality with their thousands of followers.

Witchcraft has grown so popular among youngsters that in May the University of Edinburgh announced the appointment of Jean Fowler, the institution’s first honorary pagan chaplain

‘I was raised in a loosely pagan household, where practices such as caring for the environment were instilled in me from a young age,’ says Holly. ‘Part of the driving force behind my blog was that I wanted to share a more witchcraft-based lifestyle, rather than sticking to the mainstream.’

Other witchcraft influencers include US-based The Hoodwitch, who has 294,000 Instagram followers and often posts stunning images of her long painted talons gripping colourful crystals, and Toxic Tears, who has more than 350,000 subscriptions to her alternative lifestyle YouTube channel. The online popularity of 21-year-old Norwich witch Harmony Nice (400,000 YouTube subscribers and 299,000 on Instagram) recently landed her a book deal about her witchcraft, which she practises as a part of her Wiccan (pagan) beliefs.

Harrogate-based Deb Robinson, 47, runs Witch Casket with her 23-year-old daughter Ella. For £27 a month, subscribers receive a box of witchcraft supplies, such as spell ingredients, herbs and candles. The service is popular among YouTube influencers, who post videos of themselves unboxing and talking their viewers through the contents – getting up to 45,000 views at a time.

‘Since launching Witch Casket 18 months ago, we’ve expanded to 30 countries. It’s immensely popular – witchcraft is very fashionable at the moment,’ says Deb. She cites crystals, herbs and incense as the company’s most in-demand items. Subscribers are from all age groups, but 90 per cent are women and half are aged 18 to 30. 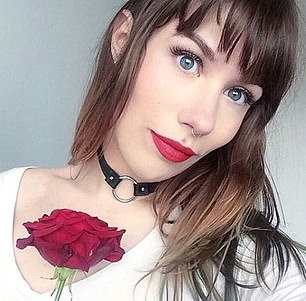 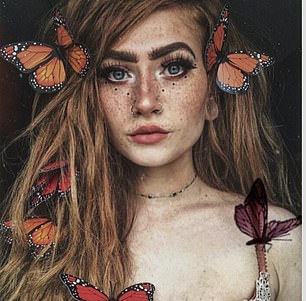 Unlike followers of traditional pagan practices, many of these young women don’t consider their witchcraft to be a religion. ‘They see practising [witchcraft] as something that is empowering and aesthetically pleasing – there are a lot of amazing images out there on social media,’ Deb says. ‘It’s also a form of escapism – looking inside yourself to find peace is very appealing at the moment with everything that’s going on in the world.’

Celebrities are getting in on the mysti-cool action, with singer Lana Del Rey saying she had put a hex on Donald Trump and using witchy imagery in videos for her last album Lust For Life, while rapper Azealia Banks has declared in several interviews that she is a witch. At this year’s Met Gala, musician Grimes – Elon Musk’s girlfriend – stood out in her new-age witch look with silver choker, long black messy hair, billowing black train and thigh-high lace-up boots. Fashionistas are jumping on the trend, with capes, chokers and lace featuring in many recent collections by the likes of Dior, Alexander Wang and Gucci. And Instagram-era witches tend to follow this eye-catching look.

Witchcraft has grown so popular among youngsters that in May the University of Edinburgh announced the appointment of Jean Fowler, the institution’s first honorary pagan chaplain, who will dispense spiritual guidance on an equal footing with religious figures from the major religions.

Whenever I have a big day ahead, I’ll keep a piece of Dalmatian jasper in my pocket and put my hand over it during the day, breathing into it and picturing my anxiety being absorbed by the stone with every out breath. Afterwards, I’ll cleanse the crystal, washing away everything it has taken in.

But why are so many women choosing to embrace their mystical side? ‘There’s always a pull towards alternative spiritualities in times of political upheaval – just look at counterculture in the 1960s,’ says Gabriela Herstik, the Los Angeles-based author of Craft: How to be a Modern Witch. ‘When we feel as though we’re not in control – as many young women do right now – we look at how we can reclaim our power. Witchcraft is inherently feminist, and it’s a way of taking care of our own wellbeing.’

Holly agrees. ‘Witchcraft is rebellious, individualistic and teaches free will as well as self-control. It’s all about personal power. Millennial women and non-binary people are taking back their power in a big way and rejecting anyone who treats them as less.’

The witches I spoke to also cited links between witchcraft or mysticism and the rise in veganism, being environmentally minded, taking the time out to practise self-care and nurture yourself in a busy world, as well as the current craze for mindfulness and meditation apps. Women are looking after their sisters – as witches reputedly did in a coven – but they also ensure that they nurture their own minds and bodies, too. For Harmony, the greatest thing about discovering witchcraft and becoming a Wiccan is how it has changed the way she views the world. ‘It’s made me a better person. It’s taught me to be kind to others and to think about what I’m putting out there,’ she says.

Gabriela agrees: ‘Magic is about how we connect with the world,’ she says, ‘but it’s also fun. It can add an element of joy, which is something we could all do with a bit more of.’