Millie Bobby Brown showed off her fashion sense as she turned heads while on her way into Good Morning America on Friday.

She then changed into a second look – a white shirt with silk suspender pants – to film an interview alongside Enola Holmes 2 costar Henry Cavill, 39.

Leggy: Millie Bobby Brown showed off her long legs in sheer black tights and a mini dress as she headed to Good Morning America on Friday

Her abbreviated frock was structured and cinched at the waist with the help of a matching belt.

Onlookers watched excitedly and took out their phones to snap photos as she entered the GMA studio.

Millie waved to her fans and had a look of content on her softly made-up visage. 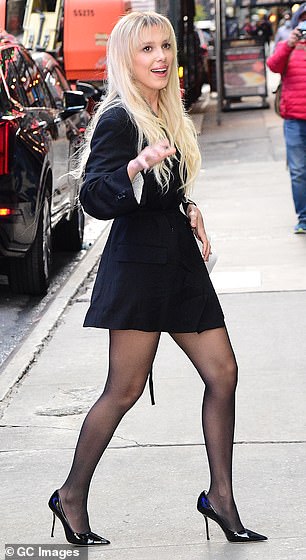 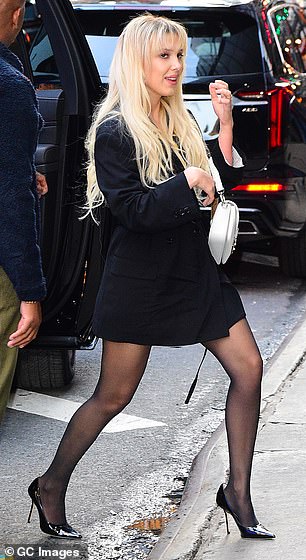 Stylish: The 18-year-old TV star teamed the look with a pair of glossy patent leather pumps while arriving to the set

While appearing on the show and speaking with hosts Michael Strahan, Cecilia Vega, and George Stephanopoulos, Brown slipped into satin trousers with matching suspenders.

The bombshell beauty wore a cropped white oxford shirt with the slacks, which were a taupe color.

She kept on her original pointed-toe stiletto heels and carried a small white Louis Vuitton purse. 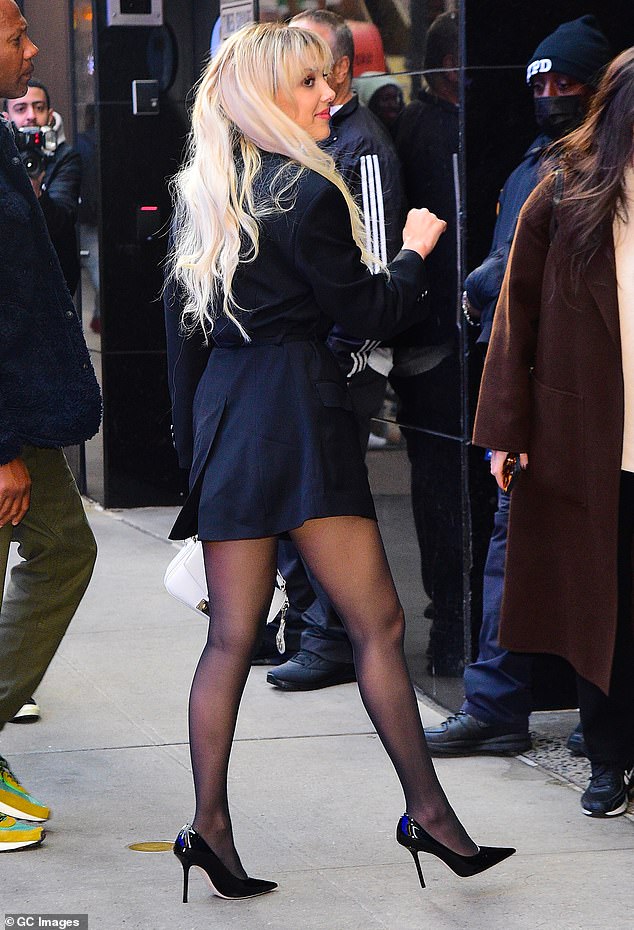 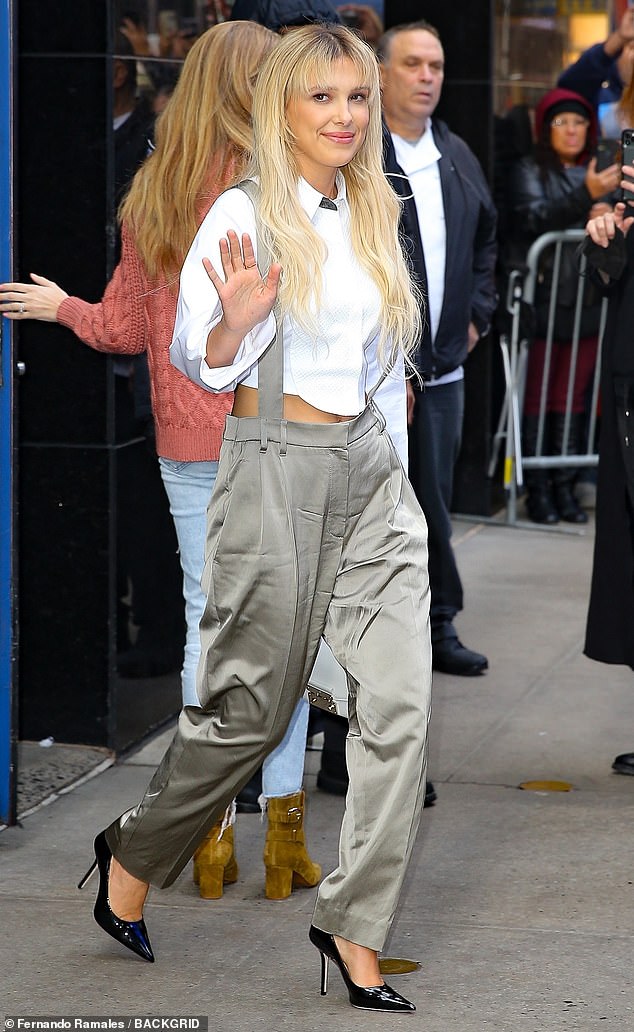 Quick change: She then changed into a second look to film her interview, rocking a white shirt and a pair of stylish grey silk suspender pants

‘It’s going to be hard, of course,’ she admitted. ‘It’s like my high school. It’s like, I grew up on the show. [The cast is] like my school friends, you know?’

But she added about her castmates, ‘I’m never gonna not see them again and I’m sure Netflix will make it last for as long as it can.’

Reflecting fondly on the popular series, Millie added, ‘It’s so much a part of my career and so formative, and I’ll always remember my experience with Stranger Things.’ 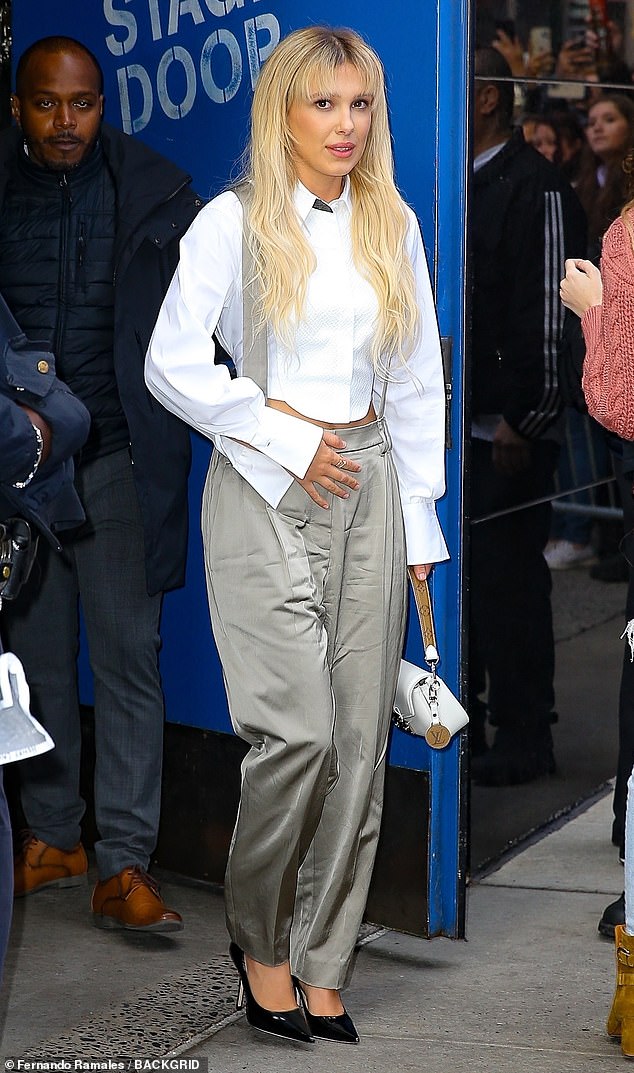 Sharp: The bombshell beauty wore a cropped white oxford shirt with the slacks, which were a taupe color

Switching gears, she then discussed her latest role as Enola, the younger sister of protagonist Sherlock Holmes.

‘I feel like Enola is not as feminine, which I think is why people love her is that masculinity within her that people feel like they can resonate [with] and she’s not afraid of it either.’

When Strahan asked the actress how much of herself she puts in the character she replied, ‘I use most of who I am within her. Actually our director Harry Bradbeer is always like, “Millie, you’re being too much of yourself and draw the line.”‘

She continued, ‘So it’s really nice to be able to implement some of my qualities, good and bad in her.

I think I use a lot of humor as a deflection so that people don’t know my heart in real life and in Enola and I think that’s a really raw and authentic part of who she is.’ 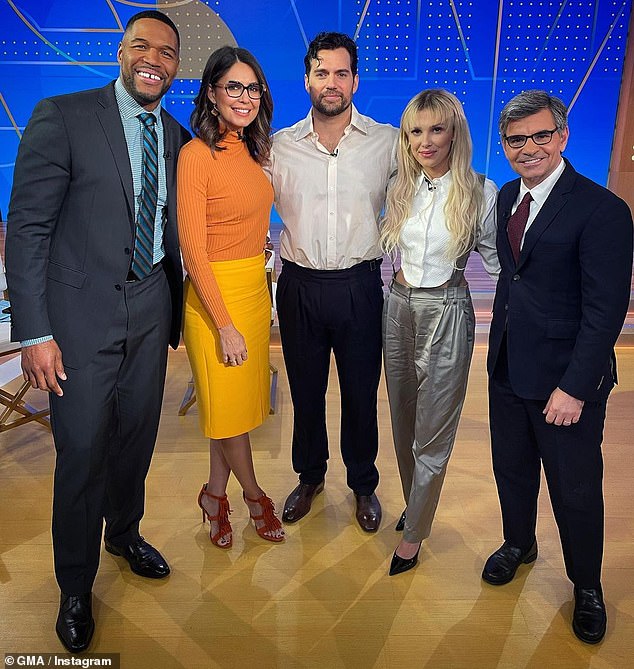 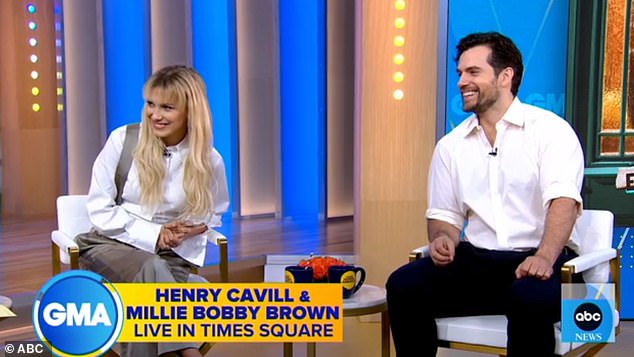 The entertainer stressed that for her character ‘showing her flaws as a woman is really important and something that you should embrace.’

To promote the appearance, the official Good Morning America Instagram account shared a photo of the stars on Friday and wrote in the caption: ‘@milliebobbybrown and @henrycavill are in the building!’

Enola Holmes 2 will be available to stream on Netflix on November 4. 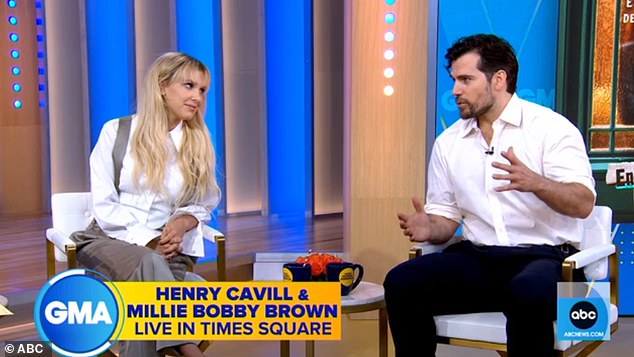 Bonded: Millie and Henry’s bond was palpable as they recalled filming together for four months 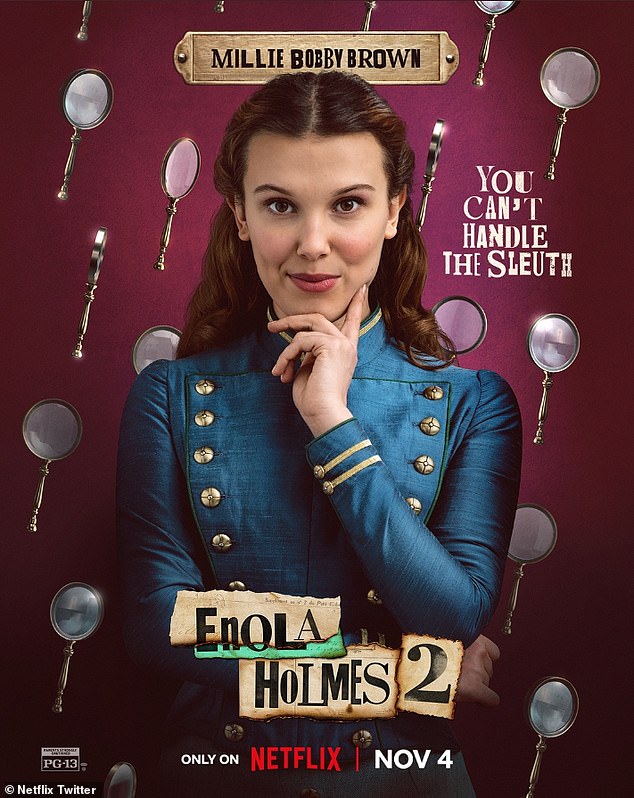