A little boy who was left heartbroken when none of his classmates showed up to his Stranger Things-themed birthday party has received messages of support from the stars of the show themselves – including its leading light, teenager Millie Bobby Brown.

Teenager Ayen Alambat, who is thought to be based in California, has been retweeted more than 40,000 times after sharing a series of photos of her little brother Aaron at his birthday party, revealing that his friends had let him down.

‘My brother invited eight of his classmates for his Stranger Things themed bday party and none of their punk selves showed up,’ Ayen wrote in the post.

Big fan: Ayen Alambat shared this photo of her little brother Aaron at his birthday party after the eight classmates he invited didn’t show up 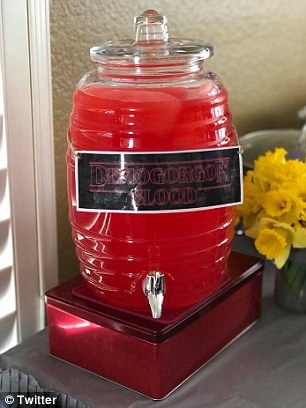 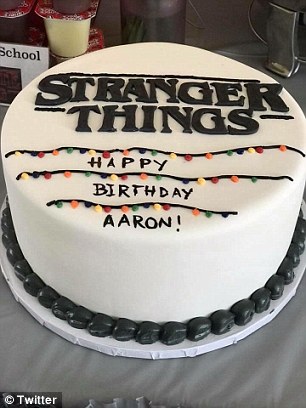 All out: The party included a Stranger Things-themed cake as well as a glass cocktail dispenser that was filled with ‘Demogorgon blood’

Putting it out there: Ayen’s tweet has been shared more than 40,000 times

In one of the images shared, Aaron can be seen proudly posing in front of his very detailed Stranger Things set up, which featured a host of fun nods to the popular Netflix show.

Indeed, Aaron’s family had clearly gone all out for the celebration; behind him, there are strings of colored lights hung up on the walls in a very similar style to those seen in the show when young character Will uses the bright bulbs to communicate with his mother from the Upside Down – another dimension that he is trapped in.

Another image shows that the same light set-up featured on his birthday cake, which was also topped with white icing, a black Stranger Things logo.

There was also a large glass dispenser of ‘Demogorgan blood’ in place of traditional soda, as well as an incredibly impressive buffet-style spread set out to cater to plenty of guests.

However, as Ayen revealed, a large handful of those guests who were invited to attend chose not to – much to her anger, and her brother’s disappointment, which certainly struck a chord with Twitter. 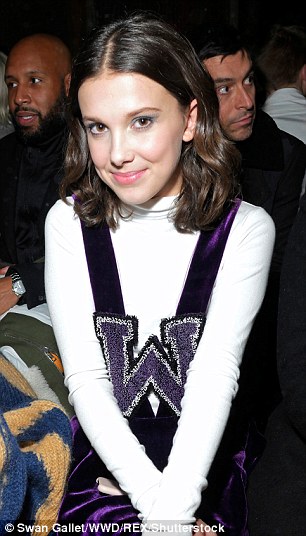 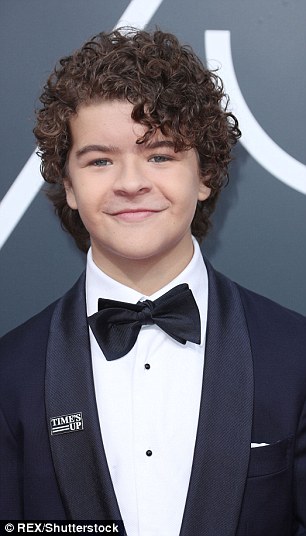 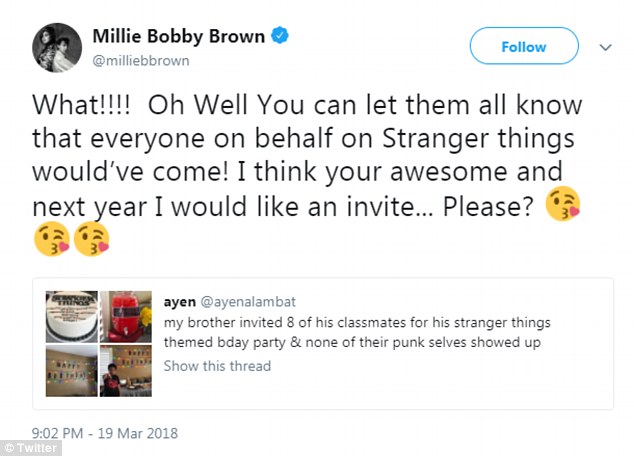 Looking ahead: Millie wrote to Ayen asking if Aaron would give her an invite next year

Another hit: Gaten chimed in with an extra offer of bringing along dessert

New friends: Plenty of other Twitter users also tweeted their support of Aaron

The new guy: Some compared the sad showing as just like previous viral sensation papaw and his burgers

Just hours after sharing her original tweet, Ayen’s post had gone viral, with hundreds of people writing to Aaron with sweet messages of support, with some even dubbing the story as ‘sad as papaw and his burgers’ – a once-viral story about a grandfather who made dinner for his many grandchildren, only to be left heartbroken when none of them turned up to eat with him.

Eventually, Aaron’s story grabbed the attention of the stars of the show themselves who, to his delight, demanded an invite to his party next year.

‘What!!!! Oh well you can let them all know that everyone on behalf on Stranger things would’ve come! I think [you’re] awesome and next year I would like an invite… Please?’ wrote Millie Bobby Brown, who plays Eleven on the hit show.

Her cast mate Gaten Matarazzo, who plays Dustin, also chimed in to say: ‘Count me in too! I’ll bring the chocolate pudding.’

Other users echoed their sentiments, with one writing: ‘Get me that location next year and we can roll up on his class in a limo with a bunch of baddies!’ 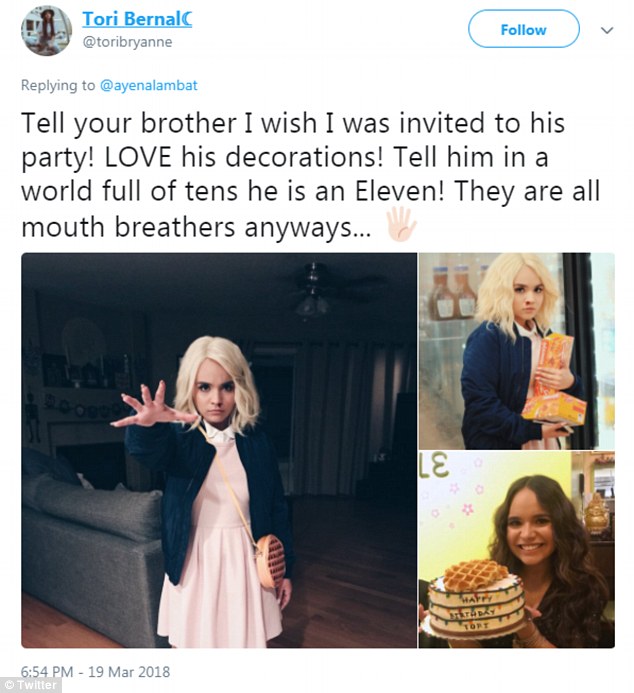 Pitching in: This user shared pictures from her own Stranger Things birthday party 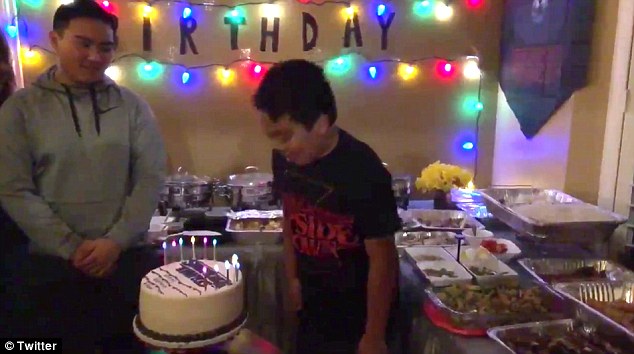 Updates: Although the classmates were a no-show, Aaron had plenty of loved ones around him on the day 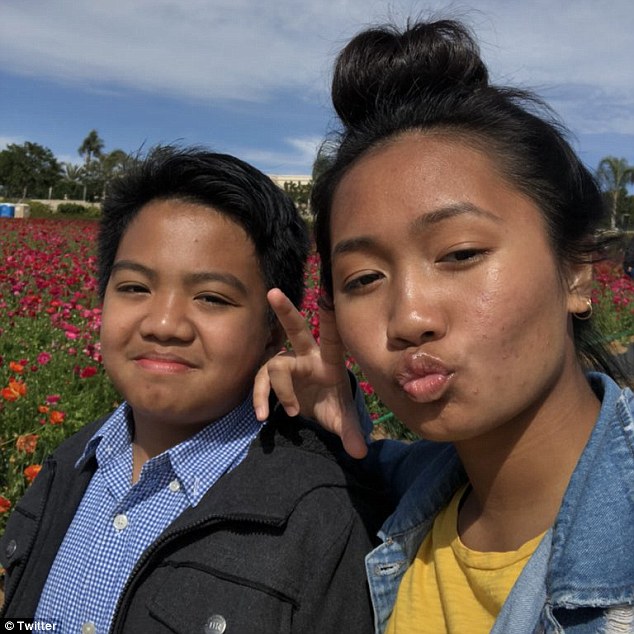 Getting back: Ayen revealed that Aaron plans to get his ‘payback’ by not going to his classmates’ parties

Another added: ‘That looks like the coolest party I’ve ever seen, his classmates don’t deserve to be there! Happy birthday lil dude! You’re cooler than all of them!’

One girl even shared images of her own Stranger Things-themed party, revealing that she had dressed up as Eleven for her soiree, and had her own colored light-covered cake, which was also topped with Eggos in a nod to the central character’s favorite snack.

‘Tell your brother I wish I was invited to his party!’ she wrote. ‘Love his decorations! Tell him in a world full of tens he is an Eleven! They are all mouth breathers anyways.’

Luckily, Ayen revealed in later updates that, while his classmates didn’t show, Aaron had plenty of loved ones there to help him celebrate and sing him Happy Birthday.

She wrote: ‘He’s chillin’ now. he says if his classmates are gonna invite him, he won’t go. That’s his payback.’