Millions of women are being forced to cope with the menopause without help, leading doctors have warned.

Prescriptions of hormone replacement therapy have plummeted by two thirds this century with experts claiming GPs are still influenced by scare stories about the side-effects of HRT published nearly two decades ago.

Despite more recent studies showing these scares were overblown, many doctors are still reluctant to prescribe the drugs.

Figures unveiled by the BBC’s Inside Out programme, to be screened tonight, reveal just 2.5million prescriptions of HRT were issued in England in 2017, down from 6million in 2000.

HRT combats menopause stress by providing oestrogen to the body but a 2000 US study suggested it doubled the risk of breast cancer, causing alarm (stock image)

Experts believe GPs have ‘forgotten’ about middle-aged women and the life-changing turbulence many of them face.

Professor Mary Ann Lumsden, senior vice president of the Royal College of Obstetrics and Gynaecology, said: ‘People stopped prescribing HRT. They forgot that the menopause occurred and can cause problems for women, the number of menopause clinics decreased dramatically and there is a whole generation of GPs who had no training in menopause medicine at all.’

Polling suggests only one in five women who could benefit from hormone replacement therapy are currently getting the treatments.

The menopause, which commonly strikes in the late 40s and early 50s, can cause depression, hot flushes, and night sweats.

HRT tackles these symptoms by providing oestrogen as the body stops producing it. Fears over HRT safety were first raised in 2002 when a US study suggested it doubled the risk of breast cancer.

Then in 2003, British research showed HRT significantly increased the likelihood of getting breast cancer and then dying.

Over the next few years the number of menopausal women on the drug plummeted.

Many doctors simply stopped prescribing the pills for fear of the cancer risk.

In recent years, however, the balance has begun to swing back in favour of HRT, with more recent studies have suggesting the cancer risks had been overplayed. 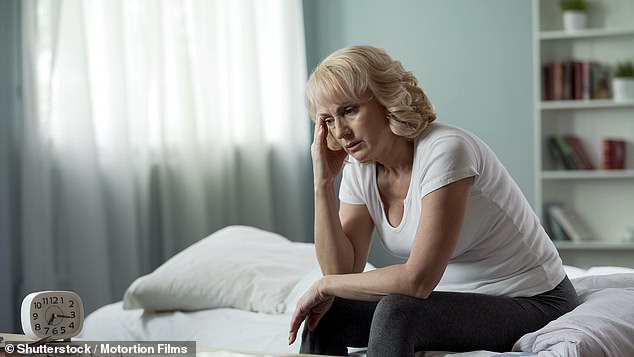 Evidence began to emerge that HRT also came with certain benefits – cutting the risk of heart disease and Alzheimer’s and strengthening the bones. Many experts now stress that while the treatment does raise the risk of cancer, it only affects a small number of women. For most women, the benefits outweigh the risks.

NHS guidelines watchdog NICE issued new advice in November 2015 advising GPs to start offering the drug to more women who should be allowed to assess risk themselves.

It stressed that out of 1,000 women taking HRT for five years, there would only be six extra cases of breast cancer and 1.5 additional cases of ovarian cancer.

Professor Lumsden said: ‘In terms of lifestyle we see that the impact of being obese and drinking alcohol is far greater.’

But old beliefs about the risks have held strong. One patient told the BBC: ‘The fact they kept saying to me there was a risk of breast cancer if I took HRT just fuelled my fear that HRT would give me breast cancer.’ Another said she had specifically approached a female GP about the problems she was having, believing she would be more sympathetic.

‘But she just said “it is natural, suck it up”,’ the patient said.

Campaigners believe a large part of the problem is confusion among GPs. Diane Danzebrink of the Make Menopause Matter organisation said: ‘This is not a rare disease, this is not something that we don’t know about.

‘What we need is a very simple to follow guide to drop into the inbox of all GPs to refer to. I could produce that tomorrow.’

Professor Helen Stokes-Lampard, Chair of the Royal College of GPs, said: ‘The menopause can be a difficult time for many women and hormone replacement therapy can certainly help.’

Inside Out will be broadcast in London tonight on BBC 1 at 7.30pm and is on BBC iPlayer from tomorrow.

Cervical cancer rates to halve by 2050

Cervical cancer rates in Britain will be slashed in half by 2050 and eliminated by the end of the century, experts have calculated.

New highly-sensitive smear tests, being rolled out to the NHS this year, will boost the number of cases detected before they turn into cancer, which kills 1,000 Britons a year.

And the HPV vaccine for schoolgirls, introduced to Britain a decade ago, will soon start to prevent cancers by the thousand.

A report published in the Lancet Oncology journal last night predicts the new developments will prevent 13million cervical cancer cases worldwide in the next 30 years. In Britain, the rate will be halved from the current 8.4 in 100,000 women to 4 in 100,000 by 2050.

Professor Karen Canfell, who led the report by the Cancer Council New South Wales in Sydney, said: ‘Despite the enormity of the problem, our findings suggest that global elimination is within reach with tools that are already available.’