Millions of Australians in coronavirus hotspots are being urged to wear protective face masks as clusters on the east coast of the country continue to grow.

There are fears New South Wales is on a ‘knife’s edge’ after 17 new cases were announced on Saturday.

In Queensland, authorities are also concerned after the state recorded ts first case of community transmission since May. 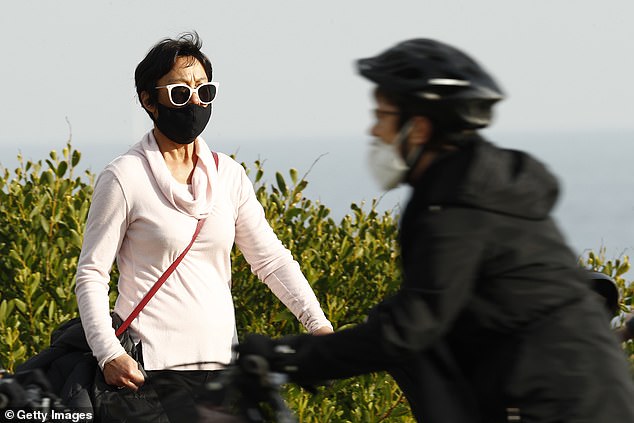 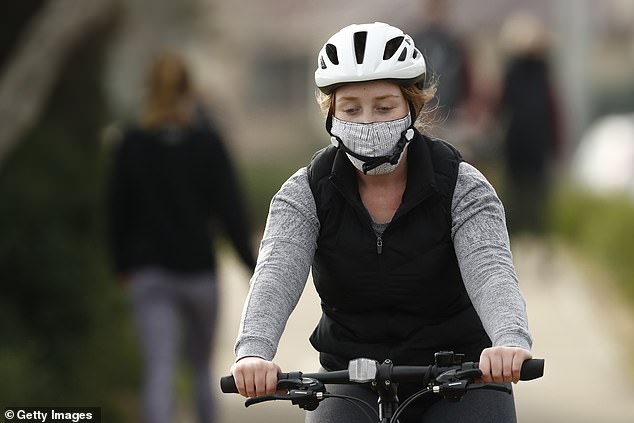 A bike rider in Melbourne is pictured wearing a mask (pictured). Anyone who does not have a face in public in Victoria can be fined $200

‘Particularly when people are outside their homes and in areas where physical distancing may be difficult,’ Professor Kidd said.

‘That, of course, includes when you go into the supermarket, where there’s lots of people moving around and people may come closer to you than the 1.5 metres, that people should be considering wearing masks.’

Grocery chain Harris Farm Markets revealed that a shopper who visited their Leichhardt store in Sydney on July 26 between 3pm and 3:30pm later tested positive for COVID-19.

Grocery chain Harris Farm Markets (pictured) revealed that a shopper who visited their Leichhardt store on July 26 between 3pm and 3:30pm later tested positive for COVID-19 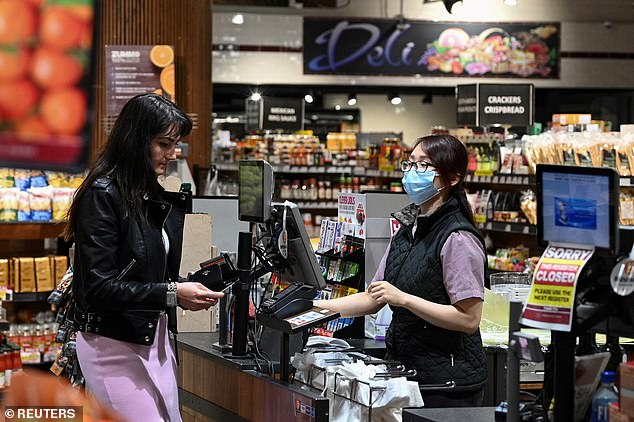 The advice from health officials, disease experts and Australia’s largest supermarket Woolworths, is to wear a mask while shopping

The store has now undertaken deep cleaning and anyone who was there during that time is advised to get tested.

‘Even though wearing a face covering is not mandatory in NSW, ACT or Queensland, as the largest private sector employer with stores in almost every community, we feel it’s important we lead the way in helping reduce community transmission of COVID-19,’ the statement said.

‘Masks and face coverings are a highly visible symbol of the persistence of COVID-19. By encouraging and role modelling their use, it will further support the steps we need to collectively take to stop the spread of the virus and keep our team and customers safe.’ 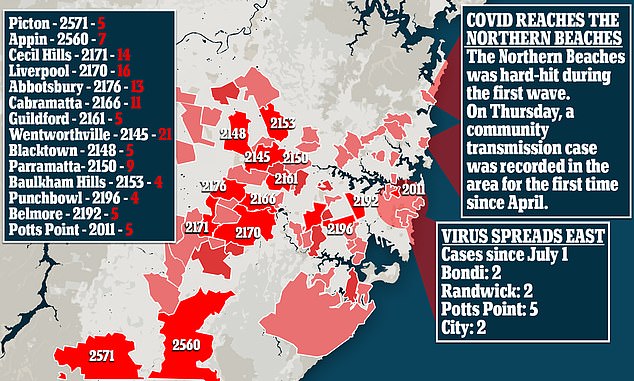 Pictured: A map showing the postcodes with the highest density of cases in Sydney since July 1. The city’s northern beaches and the eastern suburbs have both recorded their first cases this month in the past 10 days 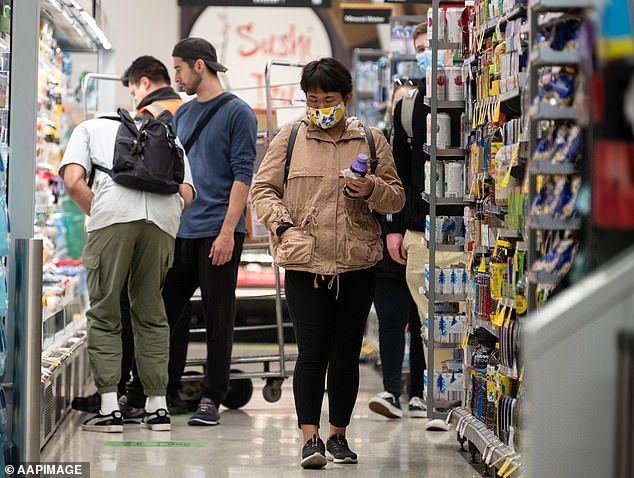 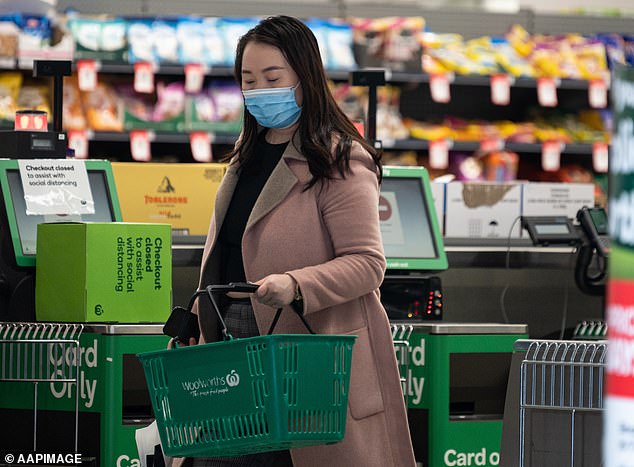 Woolworths has encouraged shoppers to wear masks (pictured, a woman in a Sydney store on Friday)

Popular Sydney pubs The Darlo Bar and Harpoon and Hotel Harry have also been forced to shut their doors after patrons tested positive.

Darlinghurst’s Darlo Bar advised a COVID-positive patron drank at their venue between noon and 2pm on July 26.

Surry Hill’s Harpoon and Hotel Harry revealed a case linked to the Apollo restaurant cluster nearby attended the busy venue between 2.15pm and 11pm on July 26.

One of the country’s most illustrious private member’s club – The Australian Club – have also been rocked by a potential COVID-19 cluster.

The venue on Macquarie Street in Sydney is often frequented by business leaders, celebrities and even former prime ministers.

It has been revealed that a staff member has tested positive for COVID-19 and the club has now been closed for deep cleaning.

All staff members and visitors who were at these venues during these times are advised to self isolate and get tested. 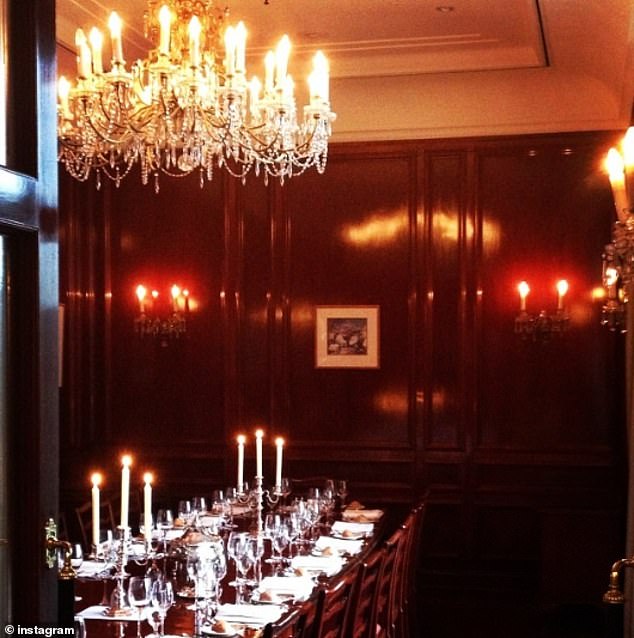 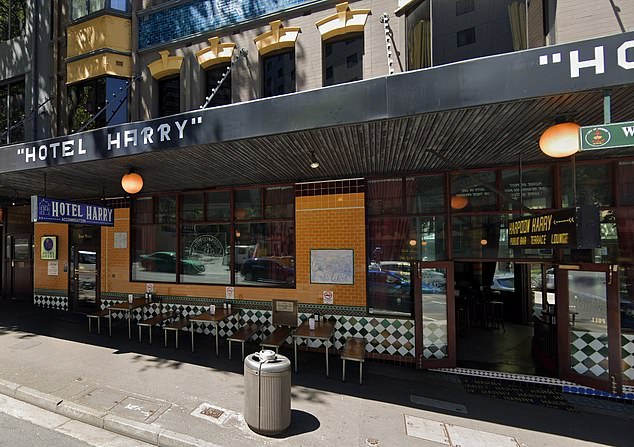 Surry Hill’s Harpoon and Hotel Harry revealed a case linked to the Apollo restaurant cluster nearby attended the busy venue between 2.15pm and 11pm on July 26

‘It makes sense to try and limit transmissions even further by asking people to wear masks who could have been exposed and could be asymptomatic or pre-symptomatic in those areas,’ she told the Sydney Morning Herald.

‘I do fear, and I believe it’s a plausible fear, that having a mask on can well give people a false sense of security … but we recognise that sometimes they are not possible and a mask can be a useful supplement, particularly when community transmission is happening.’ 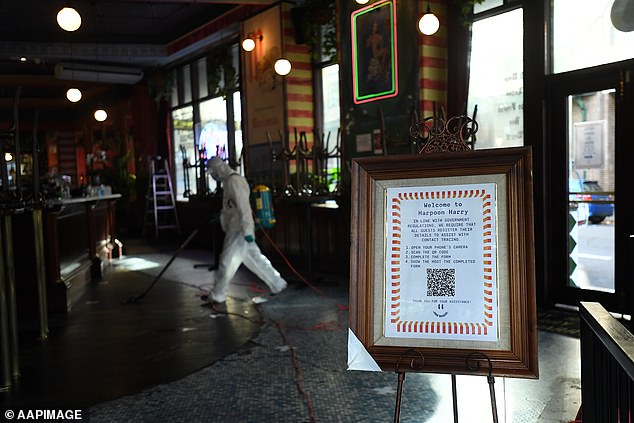 A cleaner is seen at Harpoon & Hotel Harry at Surry Hills in Sydney, Friday, July 31, 2020 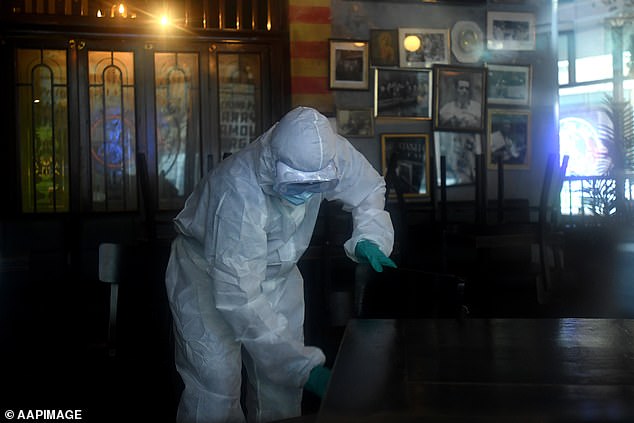