Republicans descended into chaos on Friday and blamed each other, Democrats and China for the stalled talks on reauthorizing the $600-a-week enhanced unemployment insurance.

The benefit runs out at midnight and will leave 30 million people who lost their jobs in the coronavirus pandemic without the much-needed extra income.

President Donald Trump has been pushing for a deal and White House negotiators are pulling out all stops to make it happen, including pushing aside Senate Majority Leader Mitch McConnell’s top priority.

But the administration reversed itself on the matter later in the day as the risks of crossing the powerful Senate leader became apparent.

As White House officials reiterated their support for McConnell, President Trump took to Twitter to point the finger at Democrats and at China, where the virus was first detected.

‘Pelosi & Schumer have no interest in making a deal that is good for our Country and our People,’ he tweeted, adding: ‘Pelosi & Schumer blocked desperately needed unemployment payments, which is so terrible, especially since they fully understand that it was not the workers fault that they are unemployed, it’s the fault of China!.’

And he didn’t let up, letting out a flurry of tweets as he flew on Air Force One from Washington D.C. to Tampa, Florida, on Friday afternoon.

‘The Do Nothing Democrats are more interested in playing politics than in helping our deserving people. DRAIN THE SWAMP ON NOVEMBER 3RD!,’ he wrote.

Meanwhile, Meadows told Bloomberg News the White House doesn’t have a strong position on the liability protections – which would protect businesses from coronavirus-related lawsuits – that McConnell has insisted it must be part of any legislation.

‘We support him in that decision,’ Meadows said of McConnell, who has called the protections a ‘red line’ in the negotiations. Democrats oppose the matter.

It was a change of position from earlier in the day when White House press secretary Kayleigh McEnany said that was McConnell’s priority and not the president’s.

‘That’s a question for Mitch McConnell,’ she said at her White House briefing when asked about the liability protections. ‘He said that that’s going to be a part of any bill, but that’s Mitch McConnell’s. That’s his priority. This President is very keenly focused on unemployment insurance.’

Her answer was seen as an indication the White House was willing to go around McConnell on the issue but such a move could back fire on them. If a deal with Democrats is cut, there is only one person who can bring it up on the Senate floor: Mitch McConnell.

And he’s said he won’t bring any legislation to the floor that doesn’t include the protection.

Additionally, Meadows and Mnuchin offered a deal to Democrats Thursday night for a standalone measure to protect the unemployment benefits – legislation that would not have included the liability protection McConnell wanted.

Meanwhile the clock is ticking.

Pelosi, Schumer, Mnunchin and Meadows are scheduled to meet in the speaker’s office on Capitol Hill at 9 am on Saturday morning to resume talks in person. The group was expected to speak on the phone Friday. 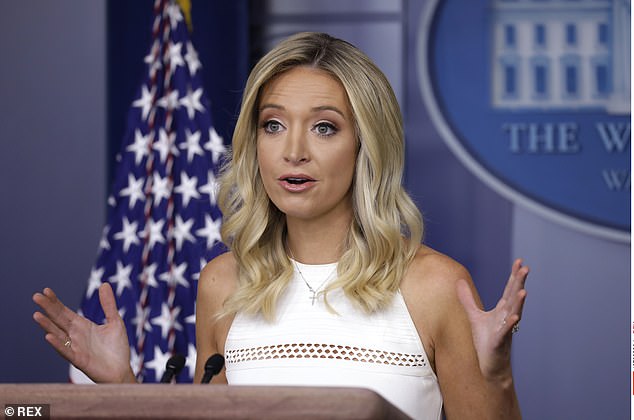 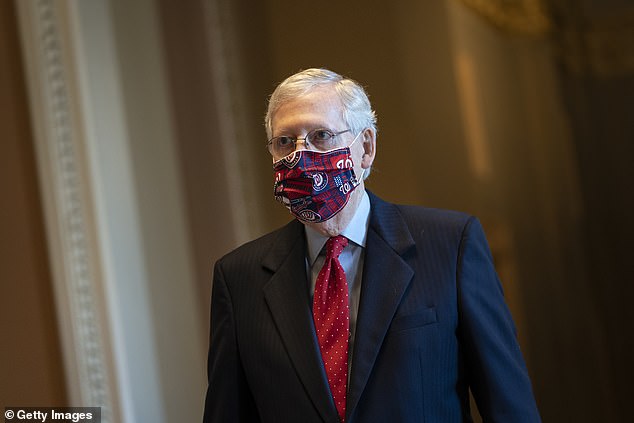 Meanwhile, Meadows made a surprise appearance in the White House briefing room Friday morning to slam the Democrats after talks that went late in Thursday night failed to produce a deal.

‘At the president’s direction, we have made no less than four different offers to Democrats on Capitol Hill,’ he said of the negotiations. ‘Four different offers have been actually rejected, but more importantly than that, they’ve not even been countered with a proposal.’

Meadows charged Democrats with having made ‘zero offers’ but House Democrats passed a plan in May that Senate Republicans rejected.

‘The Democrats believe that they have all the cards on our side. And they’re willing to play those cards at the expense of those that are hurting,’ Meadows said.

‘We call on Capitol Hill to get serious about their negotiations,’ he added.

Negotiations have stalled on a number of details that were in the GOP legislation that McConnell released on Monday – including how much the additional unemployment benefit should consist of (Republicans proposed $200 a week but Democrats want the same $600), how long it should continue, and additional funding for cities and states that have seen their budgets decimated by the pandemic.n

Republicans have dealt with their own in-fighting on coronavirus rescue package: Conservatives balked at the $1 trillion price tag and McConnell decried President Trump’s push to include funding for a new FBI headquarters that would sit across the street of his Washington D.C. hotel.

McEnany pushed back on reports of the party bickering, saying that was ‘not it at all.’ 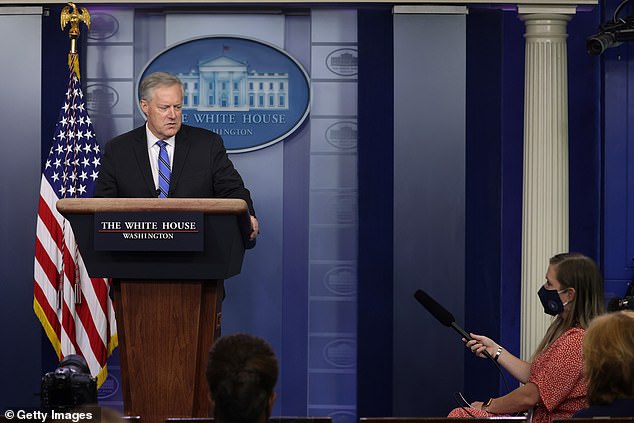 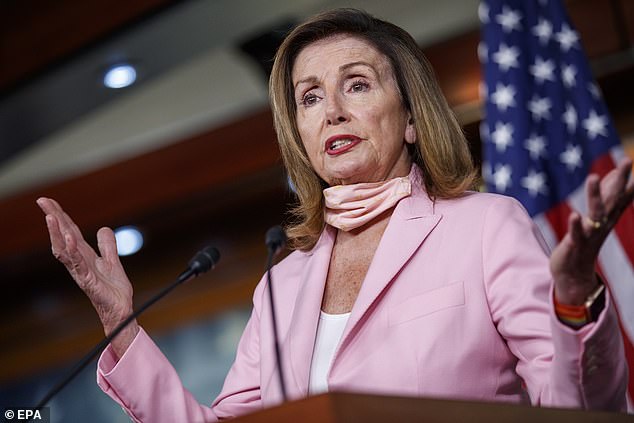 While Meadows and McEnany spoke at the White House, down the other end of Pennsylvania Avenue- at the Capitol building, Speaker Nancy Pelosi decried Republicans for stalling on a deal.

‘Their delay, their denial, their distortions have caused deaths,’ she said.

She also slammed Republicans for not including other provisions to help people, such as food assistance and additional funding for SNAP.

‘Food. I mean really, the one that gets me is food. I guess it’s because I’m a mom and, I guess, as an Italian American, food means a lot to me. People are hungry and we’re not doing anything about it. That’s not in the bill,’ she said.

But Pelosi did say she was hopeful there will be a bill to vote on.

‘We anticipate that we will have a bill. But we’re not there yet,’ she cautioned. 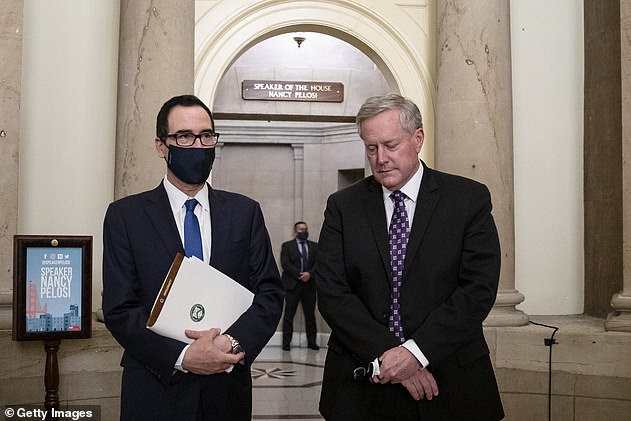 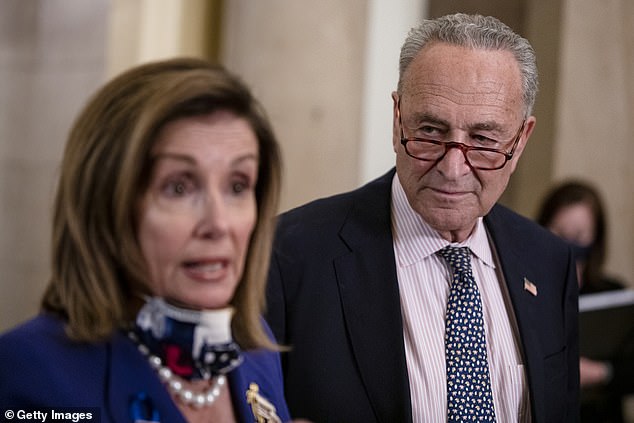 Meadows, after leaving Pelosi’s office Thursday night, said their proposals ‘were not received warmly’ and discussions would pick back up on Friday.

‘I think they understand that we have to have a bill, but they just don’t realize how big it has to be,’ she said.

‘They never have understood the gravity of it,’ she noted.

Meadows offered to extend enhanced unemployment at $600 per week for four months as a stand-alone bill, Politico reported, but Democrats want it extended through the first quarter of 2021 – a nine month extension.

Meadows and Mnuchin rejected that but the treasury secretary voiced optimism about negotiations as he left the Capitol building.

Schumer said both sides wanted to come to a deal.

‘Did we have a good discussion? Yes. Will we continue to discuss? Yes. Do we want to continue to come to an agreement? Absolutely. But it’s got to meet the gravity of the problem,’ he said.

The group of four have met for four days in a row but have failed to make a deal.

All the players say they want an agreement but none have – yet – been willing to compromise on key points, such as the amount to extend the unemployment benefits, for how long, and additional funding for cities and states whose budgets took a hit during the pandemic.

Congress and White House officials have spent the week in negotiations after Senate Republican Leader Mitch McConnell presented a proposal on Monday.

His plan quickly stalled after conservative Republican senators complained about its $1 trillion price tag and Democrats – plus some Republicans – criticized the package for containing non-COVID matters, such as funding for a new FBI headquarters.

Democrats have taken advantage of the in-fighting among Republicans to push for expanded relief options, such as food assistance programs.

Meanwhile, the loss of the unemployment benefits will strike a financial blow to the tens of millions of Americans who lost their jobs due to the coronavirus pandemic.

The talks stalled amid news the U.S. economy suffered its worst drop in history in the second quarter of 2020 – shrinking by 33 per cent in the April-June quarter. Unemployment sits at 14.7 per cent.

President Trump, who is banking his re-election hopes on a strong U.S. economy, appears eager for a deal.

He urged Democrats to come to the table after Senate Republicans failed to come together on consensus.

‘We want a temporary extension of expanded unemployment benefits,’ he said during a Thursday briefing at the White House.

He also said he’d push for the package to include another round of checks for Americans – similar to the $1,200 checks that were circulated, and signed by the president, earlier this year.

‘We need Democrats to join us to pass additional economic relief payments for American citizens,’ Trump said, putting the pressure on the opposition. ‘Like the payments sent directly to 160 million Americans earlier this year, which was a tremendously successful program.’

He added: ‘This money will help millions of hardworking families get by.’ 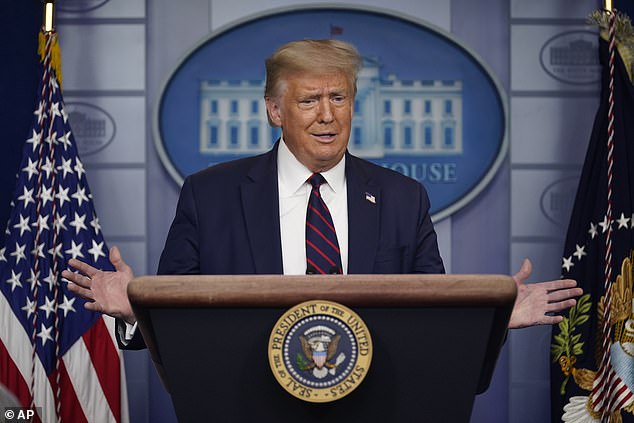 Senate Republicans on Thursday tried to force through a standalone measure that would renew federal unemployment payments at 66 percent of lost wages, or $200 per week.

But Democrats blocked the legislation, saying it was not enough.

The Senate adjourned and left town for the weekend but McConnell put a legislative procedure in place that would allow a vote on a compromise package next week.

Democrats are playing hardball, demanding much more than the $1 trillion that McConnell originally offered, arguing Americans need additional assistance. House Democrats passed a $3 trillion plan in May that the Senate rejected.

McConnell has tried to push the blame to the opposition.

‘They won’t engage. Period,’ McConnell said Thursday as he opened the Senate. ‘The Democrats are saying, my way or the highway.’