A suspicious package investigation took an unexpected turn after a fed-up cyclist emptied its contents onto the street before police tackled him to the ground.

The bag was reported to police after it was spotted on top of an electrical box  on Wisconsin Avenue in Milwaukee shortly before 7am.

The call prompted response from police and the the bomb squad who were investigating the ‘suspicious package’ before the bizarre scene unfolded.

The video shows the bag being moved from the box onto the intersection by an official in protective armour as a safety precaution causing the road to be blocked off with police tape.

The seemingly impatient road user is seen getting off his bike next to the yellow tape before picking up the bag and tipping out the contents-of which were a water bottle, clothing and smaller items- onto the street.

The cyclist then slams the back on the road before hastily being tackled to the ground by a number of officers with one of them cuffing the assailant.

The bomb squad and police remained at the scene after the man was taken into custody. 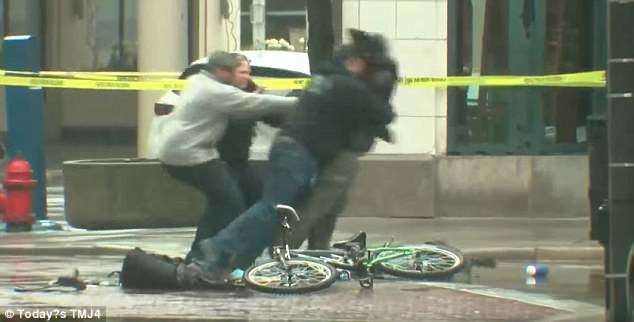 Without missing a beat, police tackle the cyclist to the ground and was taken into custody.

Eyewitnesses described how they feared the man was ‘going to get blown up ‘ because of his reckless behaviour.

One said: ‘He rode past me and was saying, ‘I’m going to defuse this situation,’ 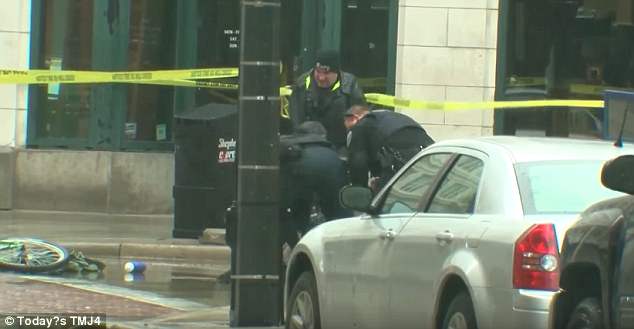 ‘If I would have saw him coming down the sidewalk earlier, I would have tried to stop him. It’s a scary situation. You don’t know if it’s a bomb or backpack. When he went and did it, I thought oh no. It’s not going to end well. It’s going to end bad.’

Milwaukee Police have not released any further information about the incident.