A tin of mince pies baked during World War Two were discovered in perfect condition under the floorboards of a hotel.

The seasonal treats were found with a handwritten note saying ‘Love from Mum’ during a renovation of the Loch Hotel in Douglas, the Isle of Man, in 1988.

It is thought the pies, which were a gift from a mother to her sailor son, were so immaculately preserved for almost 80 years after being sealed in an air tight container.

The festive pies were left forgotten in storage but have now been put on display for for the first time at the Manx Museum, according to the BBC.

The tin of mince pies were found with a note saying ‘Love from Mum’ during a renovation of the Loch Hotel in Douglas, the Isle of Man, in 1988

The red and white tin was addressed to Able Seaman Phil Davis and accompanied by a letter signed ‘best, love from mum’.

Matthew Richardson, curator of social history for Manx National Heritage, said that Christmas was ‘the right time for them to shine’, the BBC reported.

And the pies, which was found by a builder, may have been hidden under the hotel’s floorboards to stop other soldiers from swiping them, according to the BBC.

Mr Richardson told the BBC: ‘If you’re in a shared room with five or six other men you don’t know, the only way you could be sure of protecting what was yours was to find a place to hide it’

Mr Richardson says the tin highlight a ‘human’ story of a soldier living away from his family preparing for war.

He told the BBC: ‘We can’t say for sure why Able Seaman Davis never ate his mince pies. Perhaps he was posted away at short notice and didn’t have time to retrieve them.’ 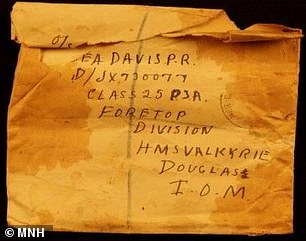 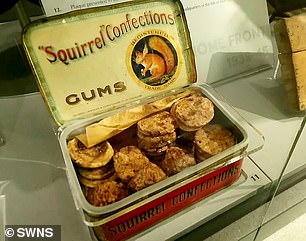 The red and white tin of pies (right) was addressed to Able Seaman Phil Davis and accompanied by a letter signed ‘best, love from mum’ (left)