Mindy Kaling and Rosario Dawson supported a cause close to their hearts Saturday in Los Angeles.

The two high profile celebrities joined with the family of the late Jeopardy host Alex Trebek in the annual Pancreatic Cancer Action Network’s PurpleStride, a 5k walk, billed as ‘the ultimate event to end pancreatic cancer’ at the Los Angeles Zoo.

Mindy, 42, lost her mother to the disease in 2012, eight months after being diagnosed.

The Late Night star currently serves as an ambassador for the organization, which she has been affiliated with for more than a decade.

‘I am so happy to be working with PanCAN and to participate in PurpleStride. I miss my mother every day, but when I can do anything to help the fight against pancreatic cancer, I feel like I am honoring her memory.’

The Mindy Project star chose all purple for the big event, wearing purple sneakers, leggings and a short sleeve t-shirt promoting Team Mindy. She wore her hair straight, and accented the walking outfit with hoop earrings. 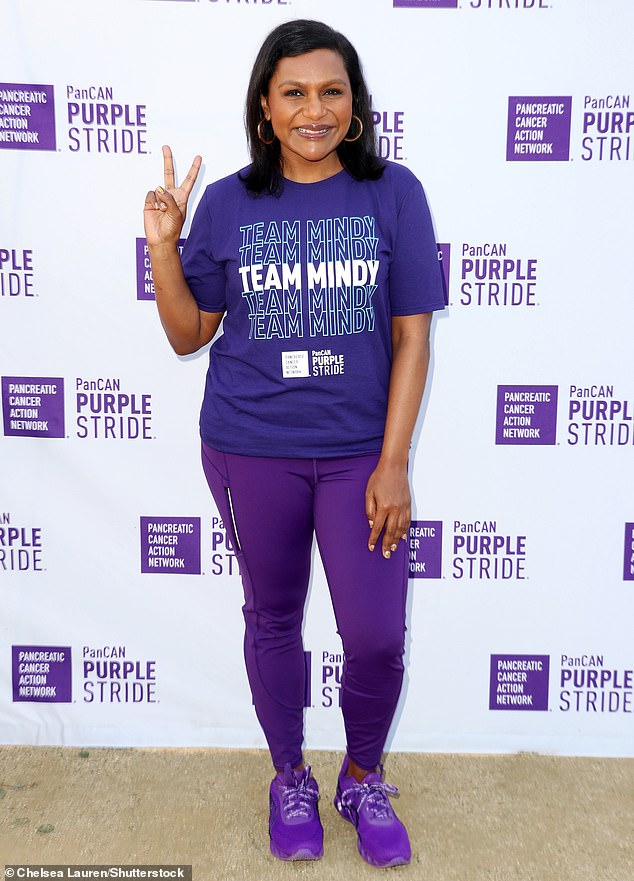 Remembering mom: The Late Night star lost her mother to pancreatic cancer in 2012.  She currently serves as an ambassador for the Pancreatic Cancer Action Network

Rosario, also 42, has helped her father, Greg, 72, in his battle with the disease since his diagnosis in 2019.

The Ahsoka actress lead a team called Rosario’s Purple Tinkerers in honor of her father, who is living with the disease.

In a statement prior to the event, the DMZ star wrote, ‘on April 30, 2022, I’ll also be there for my dad at PanCAN PurpleStride, the ultimate event to end pancreatic cancer. I’ll be taking steps to improve the survival rate for this disease. Because every single increase in survival represents life!’ 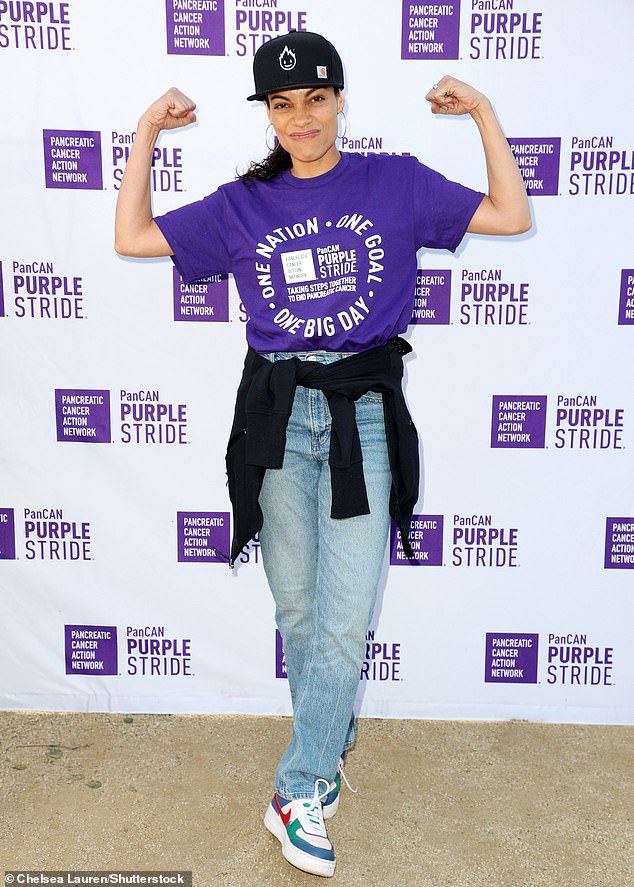 Doing it for dad:  Rosario Dawson’s father, 72,  was diagnosed with pancreatic cancer in 2019.  The Dopesick actress continues to help care for him 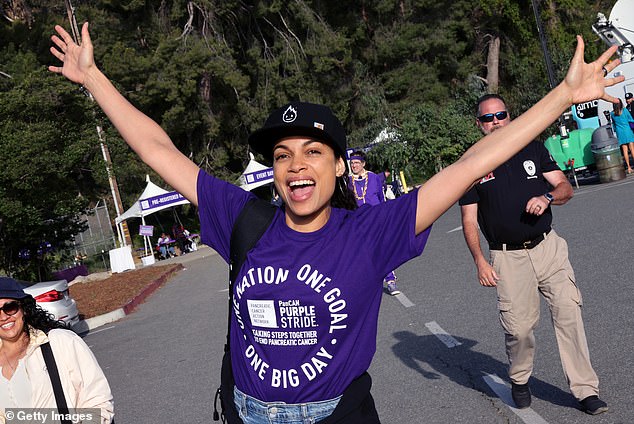 Team spirit:  The Ashoka star formed her own fundraising team, Rosario’s Purple Tinkerers, to raise funds for cancer research. Pancreatic cancer is the third leading cause of cancer deaths in the US

The Dopesick star donned a pair of jeans, a purple event t-shirt and rainbow sneakers for her stride through the LA Zoo. She tied a black sweatshirt around her waist and pulled her long locks into a pony tail and topped the look off with a black cap and large hoop earrings.

Joining Mindy and Rosario in the battle against the deadly disease were Jean and Nicky Trebek, the wife and daughter of the late Jeopardy host, Alex Trebek.

The game show star died in November 2020 at age 80 after battling the cancer for nearly two years. 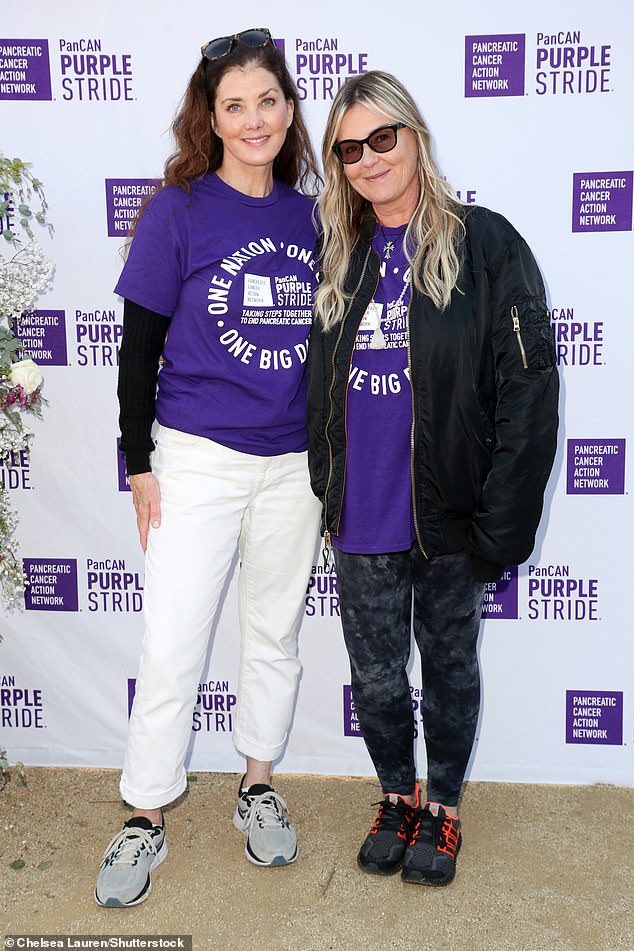 Honoring Alex Trebek: Jean and Nicky Trebek, the widow and daughter of the late Jeopardy host Alex Trebek turned out to help fight the disease that claimed the game show host’s life

Jean, 58, wore white pants, sneakers and a long sleeve black shirt underneath her purple t-shirt and styled her auburn hair in loose waves.

Organizers of the fundraiser decided to do something different this year, and for the first time, the 60 different PurpleStride events, in communities across the country, walked in the 3.1 miles on the same day. PanCAN raises money for pancreatic cancer research and helps patients and families find treatment. Pancreatic cancer is the third leading cause of cancer deaths in the US. 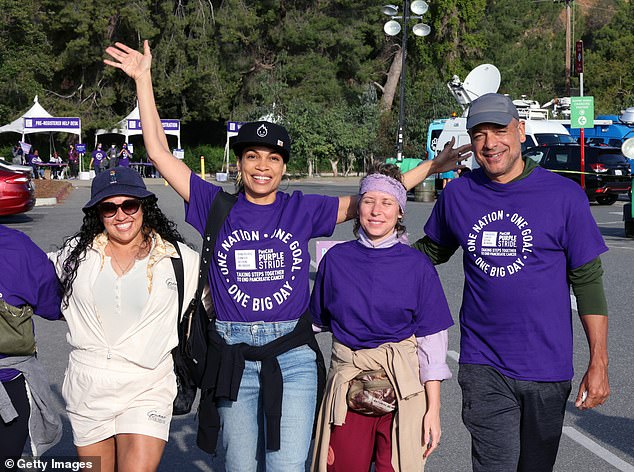 Team work:  Rosario Dawson joined with others whose families have been affected by pancreatic cancer in the 3.1 mile fundraising walk at the LA Zoo