Ming Xi looked elated as she made it through the Victoria’s Secret Fashion Show on Thursday.

Placing her hands on her chest the 29-year-old model appeared relieved as she managed to stay upright one year after taking a tumble at the 2017 event.

Despite wearing perilously high lace-up heels, they were no challenge for Ming this time round as she nailed her walk at Pier 94 in New York in front of a star-studded crowd.

She did it! Ming Xi is overjoyed as she reaches the end of the runway without tripping over during Thursday’s Victoria’s Secret Fashion Show following last year’s fall

Ming looked gorgeous in a patterned bodysuit with ruffled neckline as she sauntered down the runway.

She wore a beautiful feathered set of wings and a bright orange bow around her neck.

Later on she changed into a sporty lingerie look complete with padded mini skirt.

Before the event the Chinese beauty looked elated to be backstage as she palled around withBella Hadid.

Ming was all smiles as she was pictured recording some footage with Bella, 22, ahead of the runway extravaganza. 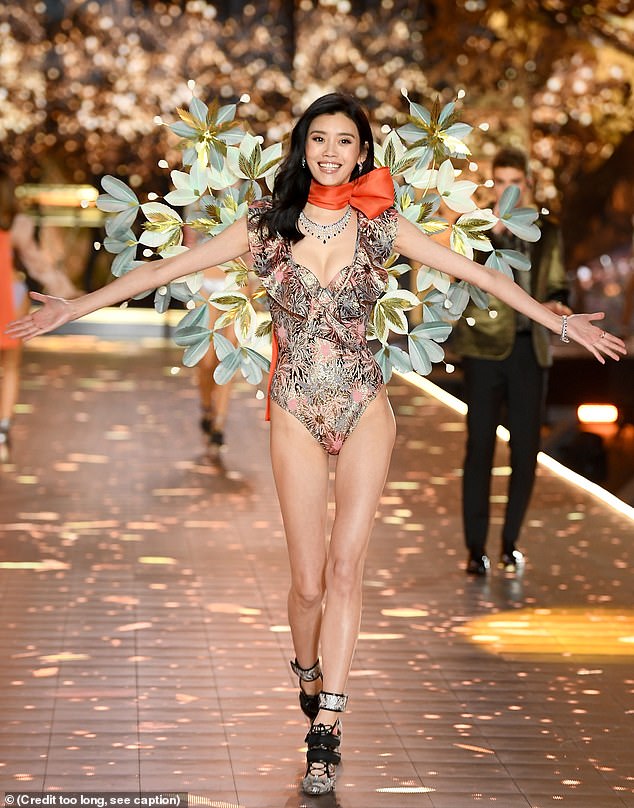 Making strides: Ming, 29, looked incredible in a pretty patterned bodysuit and orange bow around her neck 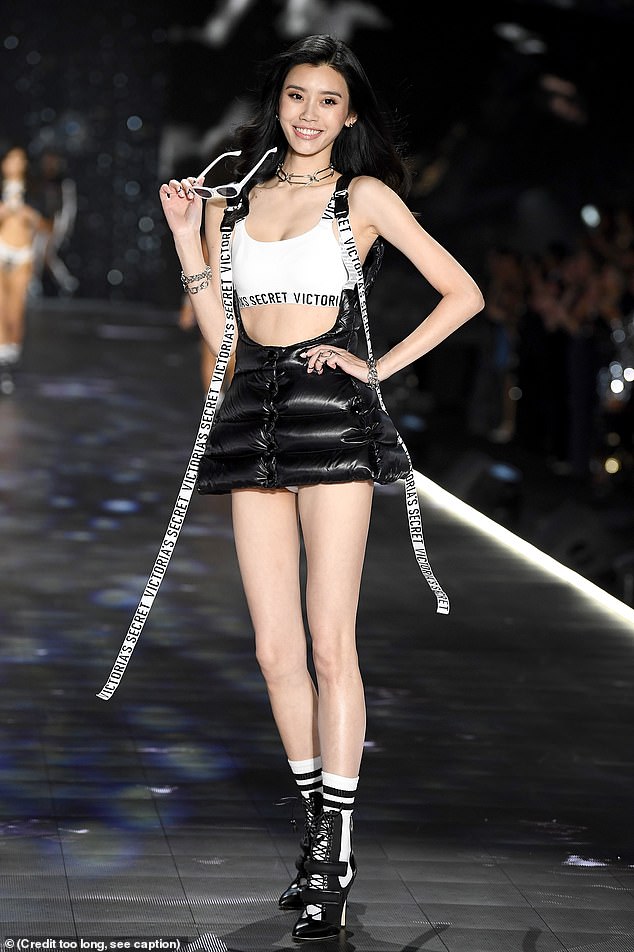 So happy: The Shanghai born beauty was also seen in a sporty lingerie look as she beamed on the catwalk

Celebration time: Later on Ming changed into an embellished nude dress with matching boots for the after party

Ming was seen with her makeup done and wearing one of the slinky VS robes as she held a camera and mic stand.

During last year’s event, which took place in Ming’s home city of Shanghai, the 5ft 10in beauty took a big tumble as she strut her stuff down the runway.

Ming was wearing over the knee lace-up heels and accidentally stepped on the flowing train she was wearing, causing her to trip and fall on her knees.

The seasoned vet smiled throughout and put on a brave face before bursting into tears backstage. 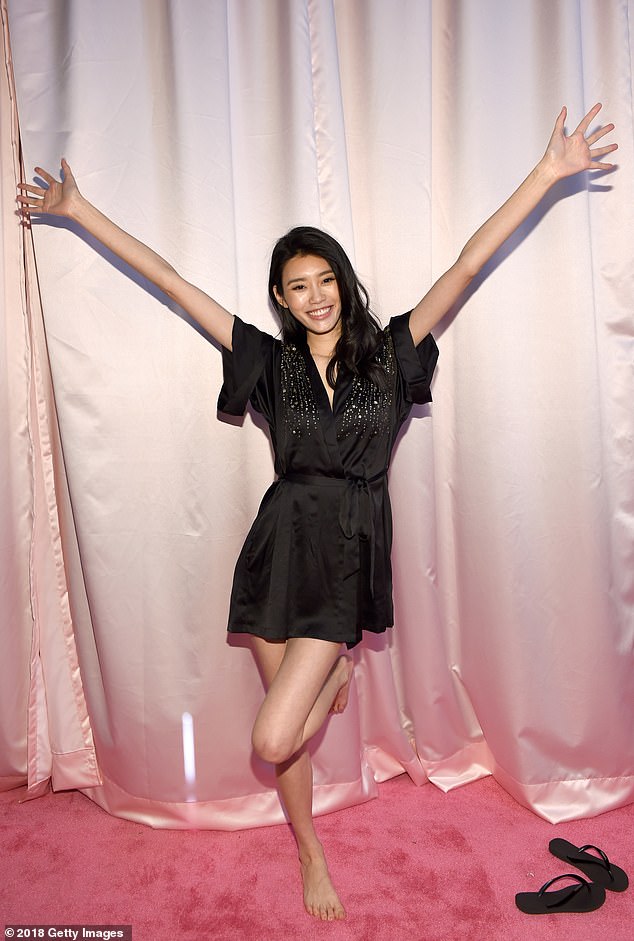 Happy: The Shanghai born beauty posed in her black robe before the show 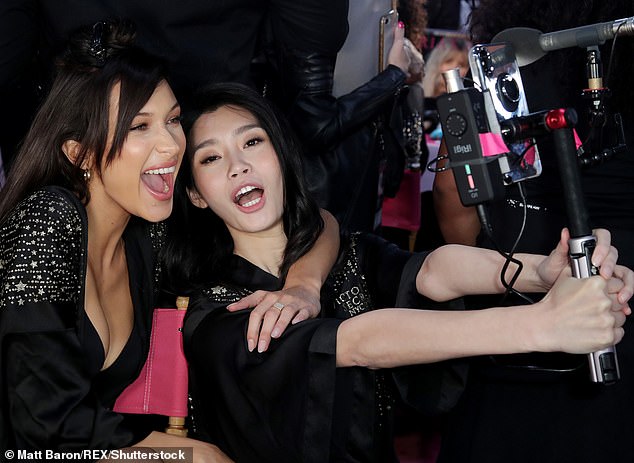 Ready to do this: Ming is pictured backstage with Bella Hadid in New York on Thursday 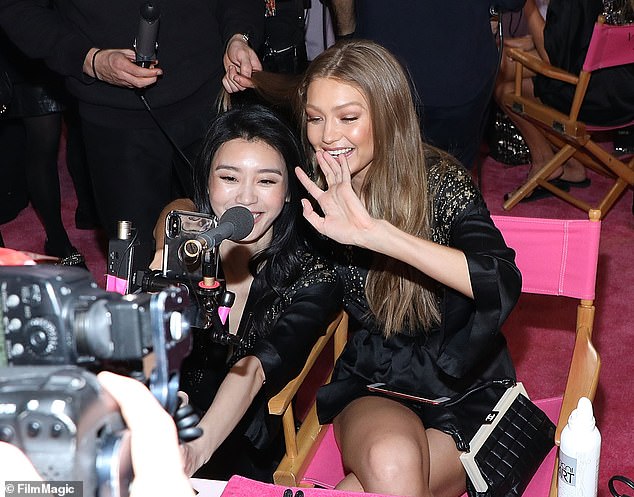 All smiles: Ming was also seen recording some footage with Bella’s sister Gigi as the models got ready backstage at Pier 94 in New York 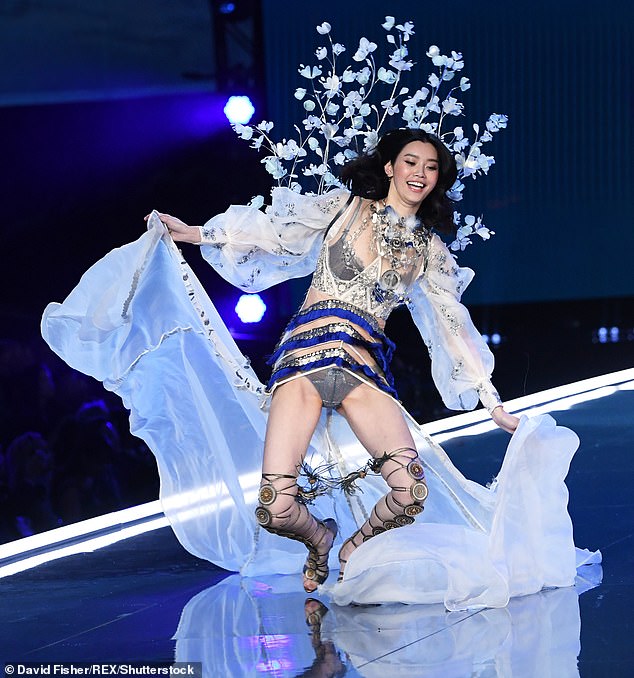 Oh no! During last year’s event, which took place in Ming’s home city of Shanghai, the 5ft 10in beauty took a big tumble on the runway 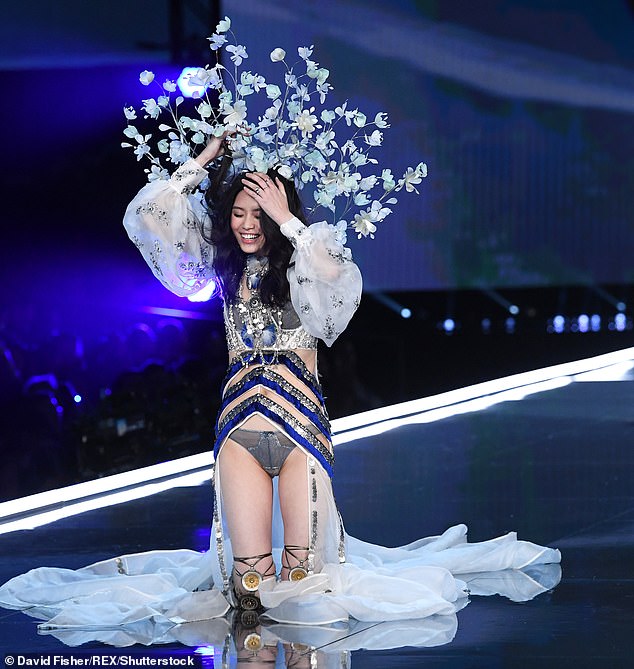 Embarrassing: Ming was wearing over the knee lace-up heels and accidentally stepped on the flowing train she was wearing, causing her to trip and fall on her knees

Once behind the curtains, the devastated model began to cry while fellow model, Lily Aldridge, tried to comfort her.

The brunette beauty, who has walked for the lingerie brand since 2013, addressed the incident in an Instagram post later that night.

‘It was no doubt one of the hardest moments I have ever had to go through in my career, especially since the show was taking place in my hometown, in front of my mother’s and my people’s eyes,’ she wrote. ‘However, the support I received from everyone yesterday was incredible and I am truly grateful to everyone who was there for me.’ 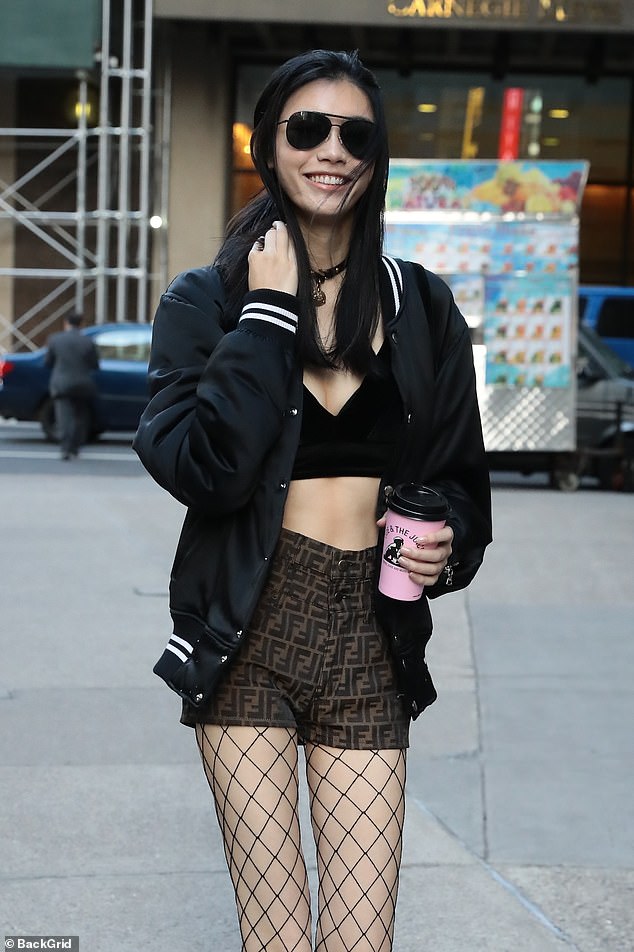 Looking good: The brunette beauty is seen all smiles as she arrived for a fitting in New York on Wednesday 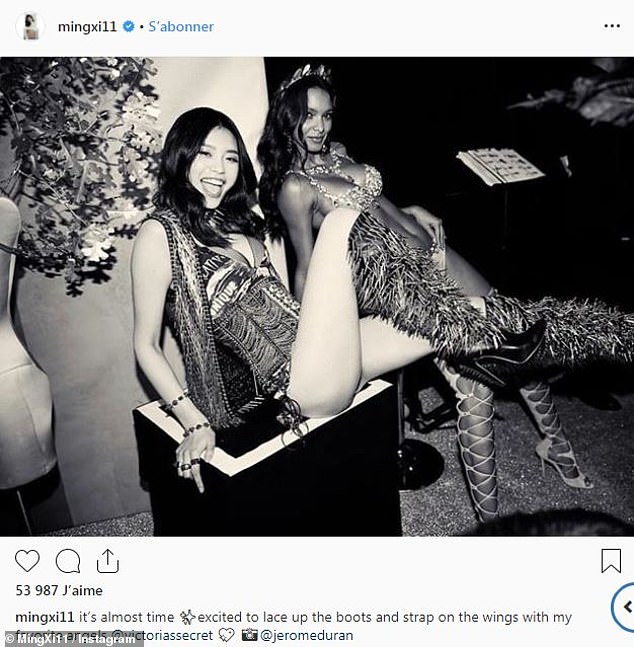 ‘Thank you to all the girls who rushed to comfort me at backstage after what had happened, you are all family to me,’ she said.

She also thanked everyone who sent her supportive messages, writing, ‘I will pick myself up from where I fell, and I will keep going in order to repay all the support you all have given me!!’

Clearly excited about the event on Tuesday Ming shared a black and white snap from the 2017 runway show of her posing with fellow model Lais Ribeiro.

She wrote in the caption: ‘it’s almost time, excited to lace up the boots and strap on the wings with my favorite angels @victoriassecret @jeromeduran’