First it was a kangaroo, then an emotional support duck. Now a miniature horse has become the latest unusual animal to accompany a passenger aboard a flight.

On Thursday, a Twitter user by the name of Ewan Nowak posted a video to Twitter that showed the adorable tiny horse aboard a packed American Airlines plane.

Nowak, who shared the clip with Storyful, says he noticed the animal shortly after boarding the aircraft which was travelling from Chicago to Omaha.

The footage shows the pony fast asleep on its owner’s lap on the packed plane.

‘At this time we would like to begin boarding with any active duty military, families traveling with children under the age of 3, and horses,’ Nowak humorously wrote.

On Thursday, a Twitter user by the name of Ewan Nowak posted a video to Twitter that showed a miniature horse on board a packed American Airlines plane

After arriving in Omaha, another traveler took video footage of the same woman walking through the airport with her animal.

‘What a time to be alive. GTHO (get the hell out) with this. Where does this pony fit on the plane? Does she get her own row because anyone sitting in hers, it’s going to be tight!!!’ the airline customer wrote beneath the clip.

While passengers are still stunned by the sights of miniature horses trotting on board aircraft, they’re set to be much more common given new guidelines provided by the federal government.

The rules, published on August 15, allow passengers to bring the creatures on board American aircraft so long as they are designated as service animals. 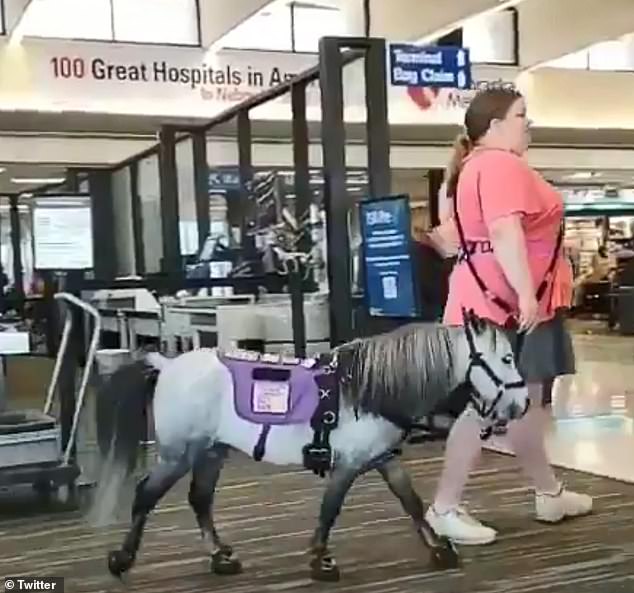 After arriving in Omaha, another traveler took video footage of the same woman walking through the airport with her animal

In a statement, the US Department of Transport told CBS 62: ‘With respect to animal species, we indicated that we would focus our enforcement efforts on ensuring that the most commonly used service animals (dogs, cats, and miniature horses) are accepted for transport’.

BIZARRE PETS PASSENGERS HAVE ATTEMPTED TO BRING ON PLANES

In 2014, a woman was booted off a from Connecticut to Washington state because her large pet pig was being ‘disruptive’. A fellow passenger told CNN the pig weighed between 70 and 80 pounds, and began dropping things in the aisle and squealing

A female traveler was left livid after Frontier Airlines barred her pet squirrel, Daisy, from accompanying her on a flight from Orlando to Cleveland. The passenger appeared on numerous TV programs blasting the company, claiming she had a letter from her doctor saying that the squirrel helped with her anxiety disorder

Last year, a woman admitted to flushing her emotional support hamster down an airport toilet after Spirit Airlines stopped her from bringing the rodent with her on the plane

Airlines may now face fines should they ban the horses from travelling with their owners.

However, airlines will still be able to consider whether other service animals – with the exceptions of dogs and cats – are fit for travel on a case-by-case basis.

Last year, Southwest became the first airline to allow miniature horses to travel with passengers if they were designated as service animals.

At the time, Southwest said the creatures ‘must be trained to behave in a public setting and must be under the control of the handler at all times.’

The American Disabilities Act differentiates between service animals and emotional support animals – which are commonly used to help calm the nerves of anxious travelers.

Unlike emotional support animals, service animals must have special training to assist their disabled owners with specific tasks.

The ADA Training Association website states: ‘Even though some states have laws defining therapy animals, these animals are not limited to working with people with disabilities and therefore are not covered by federal laws protecting the use of service animals’.

Back in 2016, a turkey was allowed a seat on a United flight because it classified as a service animal for its disabled owner. 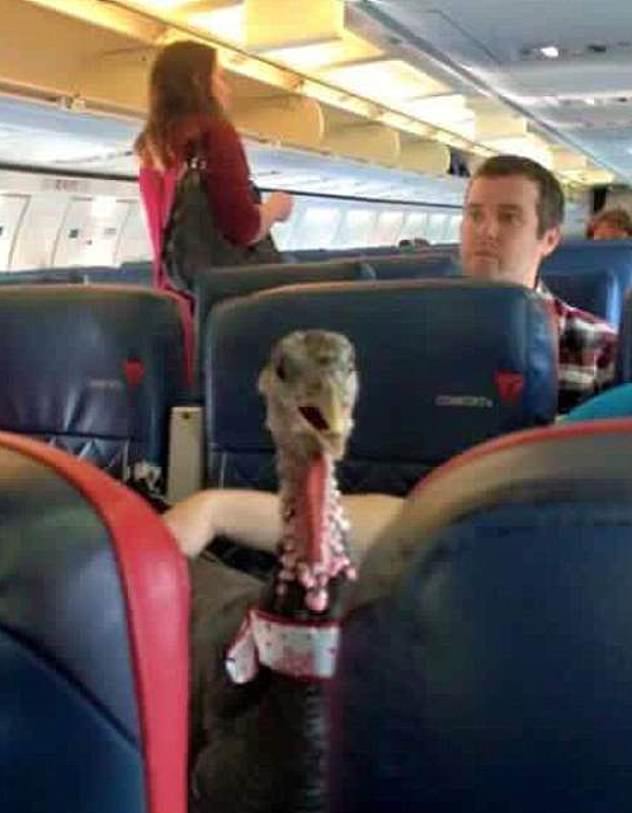 Back in 2016, a turkey was allowed a seat on a United flight because it classified as a service animal for its disabled owner 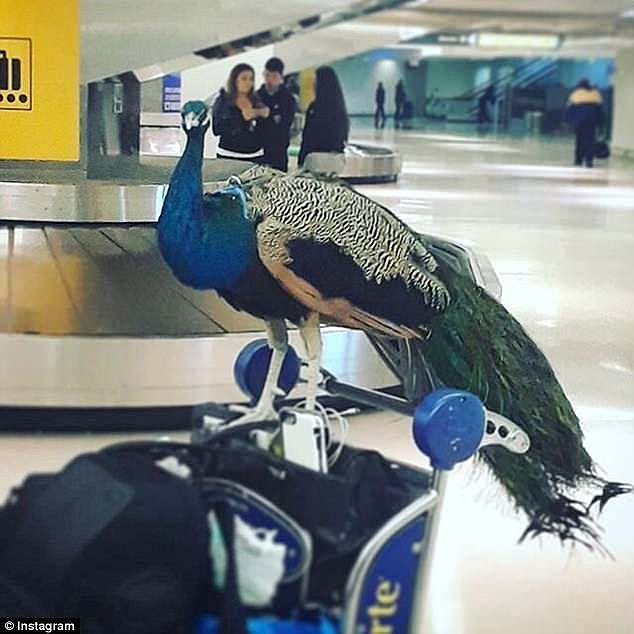 In January of last year, United Airlines famously stopped a female passenger from bringing her ’emotional support peacock’ aboard a flight 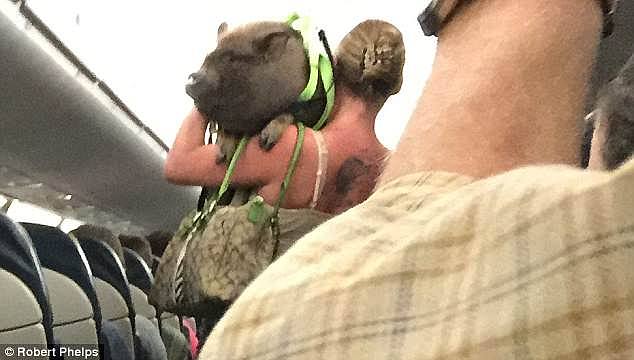 In January of last year, United Airlines famously stopped a female passenger from bringing her ’emotional support peacock’ aboard a flight out of Newark Liberty Airport.

The company claimed that the peacock – named Dexter – surpassed weight and size restrictions.

Elsewhere, squirrels and hamsters have also been booted off planes, while American Airlines last year banned insects, goats, and hedgehogs from travelling with their owners.

However, other fliers have been more successful in bringing aboard their support pets.

In 2015, a snap of a flight attendant cradling a kangaroo on board an American plane went viral.

And, on a 2016 flight from Charlotte to Asheville, North Carolina, commuters were left stunned when a passenger brought his pet duck, Daniel, onto the plane. 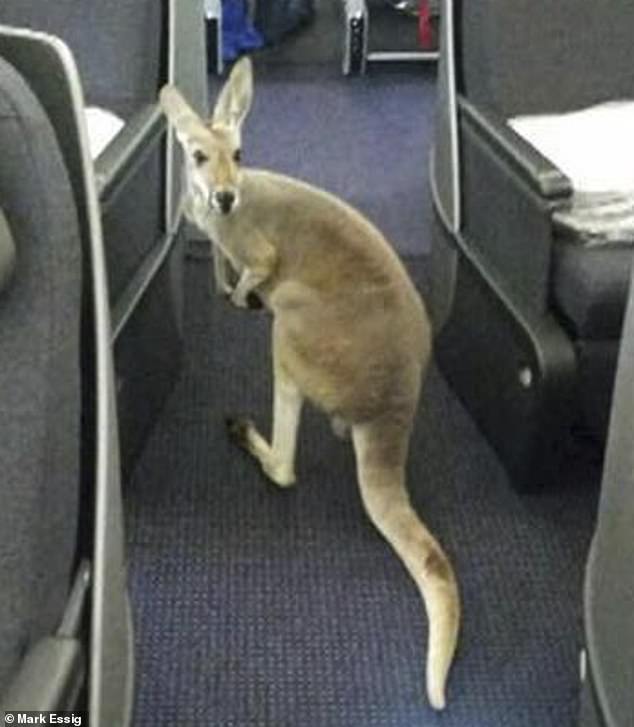 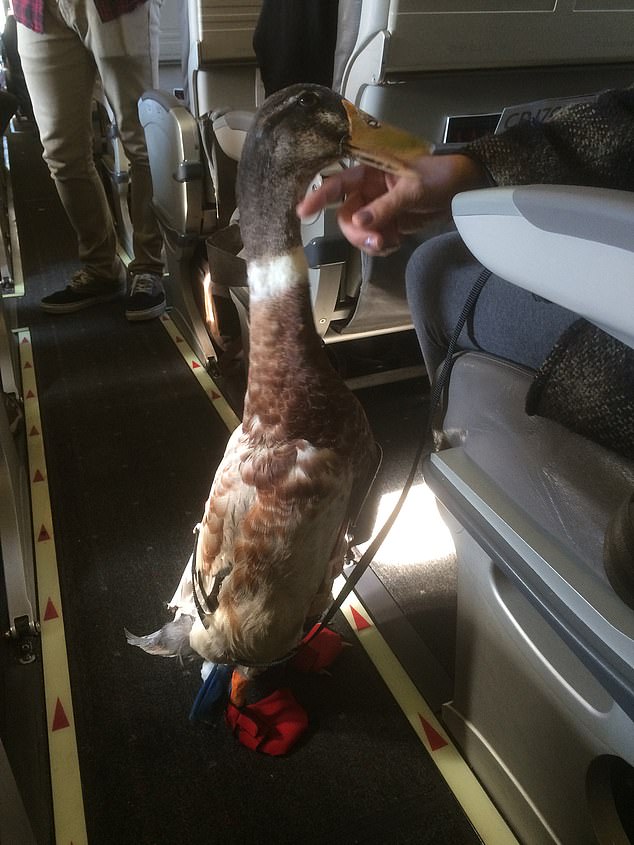 Commuters were left stunned when a passenger brought his pet duck, Daniel, onto a plane in 2016