Professor Heneghan, director of the Centre for Evidence-Based Medicine at the prestigious university, questioned why the review was taking so long and claimed it should be a ‘straightforward’ fix

Pressure is mounting on ministers to speed up an official review into the way coronavirus deaths are calculated amid claims the daily counts were being inflated.

Matt Hancock announced 10 days ago than an ‘urgent’ review was being carried out into how Public Health England was counting deaths.

It emerged that the Government agency was classing people as Covid-19 victims if they died of any cause any time after testing positive for Covid-19 – even if they were hit by a bus months after beating the life-threatening infection.

Experts today demanded the ‘unacceptable’ inaccuracies were straightened out to paint a clearer picture about how devastating the crisis really was in the UK.

The statistical flaw was uncovered by Oxford University’s Professor Carl Heneghan and Dr Yoon Loke, from the University of East Anglia, who believe more than a thousand people have had their deaths wrongly attributed to the disease.

Professor Heneghan, director of the Centre for Evidence-Based Medicine at the prestigious university, questioned why the review was taking so long and claimed it should be a ‘straightforward’ fix.

He added: ‘It has been over ten days since the government said it was looking into the issue of reporting of deaths and we have not yet heard an answer.

‘The reasons for this delay are not clear, but it should be straightforward to report the number of deaths of those who died with an active infection in the last 28 days.’ 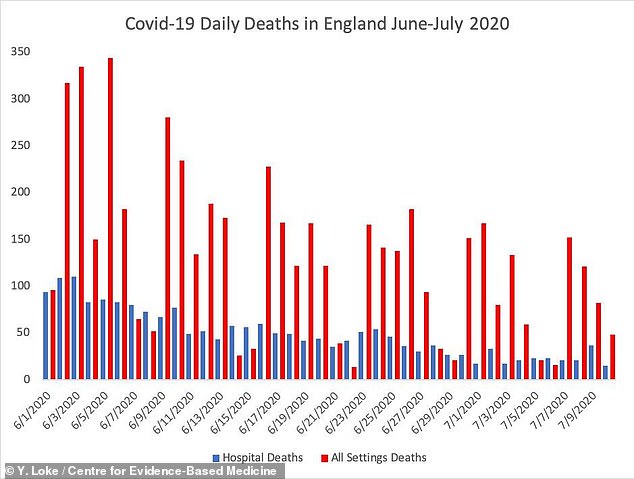 The Department of Health and Social Care could not provide an update on the review or give a rough time frame for when it would be published.

A spokesperson added: ‘The Health Secretary has asked Public Health England to conduct an urgent review into the reporting of deaths statistics, aimed at providing greater clarity on the number of fatalities related to Covid-19 as we move past the peak of the virus.’

Professor Heneghan and Dr Loke were the first to sound the alarm about the flaw on July 16.

The Department of Health has paused its daily publications about Covid-19 deaths until the review has been carried out.

But updates are still provided by Public Health England, which says it has changed the way it counts fatalities.

The Office for National Statistics also records Covid-19 deaths, and is considered the most reliable. 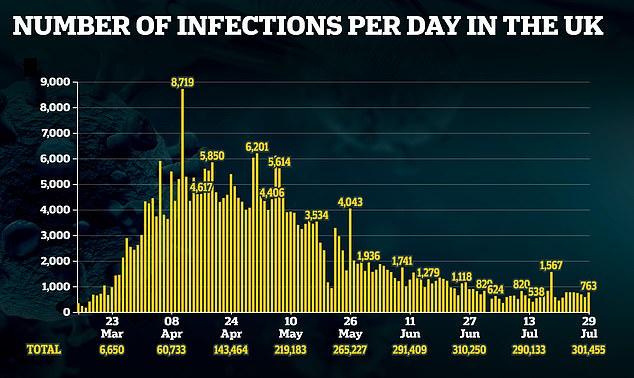 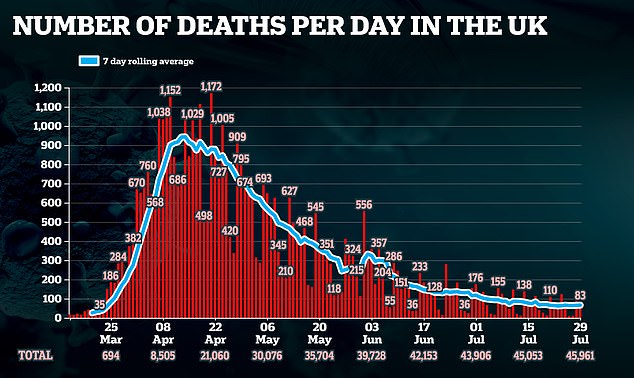 Department of Health’s latest death count for all settings stands at 45,961.

Data compiled by the statistical bodies of each of the home nations show 56,483 people died of either confirmed or suspected Covid-19 across the UK by mid-July.

Its calculations are based on death certificates with Covid-19 as a suspected contributor.

Whereas the Government’s statistics only include those who have tested positive for the virus.

Many people missed out on tests at the start of the crisis while ministers struggled to ramp up swabbing capacity.

This week, the ONS report showed that 295 Covid-19 deaths were registered in England and Wales in the week to July 17.

Of these, 192 actually occurred that week, while others happened in the weeks before and reporting had been delayed.

But Public Health England reported 447 deaths in the same week, based on people who had received a positive Covid-19 test result.

In England alone, ONS data reported 284 deaths – but PHE recorded 442 deaths in the same week – a 56 per cent increase.

In Wales, ONS data reported 11 deaths involving Covid-19, but the government figure shows five deaths were reported, which is 45 per cent fewer.

While ONS data suggests daily deaths have dropped to below 40, the PHE count suggests they are still over 60. Sometimes daily counts from the government can still exceed 100.

This, the professors say, is ‘in stark contrast to the more reassuring recovery’ being seen in Wales, Scotland and Northern Ireland ‘where there are days with no Covid-associated deaths whatsoever’.

And NHS England is reporting under 20 deaths in its hospitals every day, which includes both positive Covid-19 patients and suspected.

‘The inaccuracies in these data sets are unacceptable,’ Professor Heneghan said.

‘Some of the deaths in week 29 [between July 11 and 17] have occurred in individuals who may not have an active infection.’

Professor Heneghan added: ‘We should be focusing on the data that matters: admissions to hospital; critical care bed occupancy and the deaths from active infection to guide our current responses.

‘Overall the numbers of registered deaths are highly reassuring and show that the current risks from Covid are very low.’

There are currently 1,277 patients admitted to hospital with Covid-19, 94 of whom are on a ventilator.

Only 70 people were admitted on July 27 – the most recent update, PHE figures show, and they were all in England and Wales.

Dr Loke warned that PHE’s method for death counting is ‘not a good way of collecting data’ and the agency ‘chose a quick and easy technique’.

The way PHE counts victims on a daily basis works by it combing through records of people who have tested positive for Covid-19 in the past to see if they have died. If they have, their death is automatically added to the coronavirus count.

It means that if, for example, somebody tested positive in April but recovered and was then hit by a bus in July, they would still be counted as a Covid-19 victim.

Dr Loke pointed out that unless PHE changes its system, all 292,000 people who have tested positive so far will be added to the Covid-19 death toll when they eventually die.

And the daily death tolls may not hit zero ‘for months to come’ because of a long tail of elderly people who beat Covid-19 but will die of other causes, Dr Loke added.

Many people, mainly in the older age group, are being discharged from hospitals or recovering from the Covid-19, but they clearly may die of other illnesses in the near future – which could be counted as a coronavirus death.

Dr Loke said: ‘By this PHE definition, no-one with Covid in England is allowed to ever recover from their illness.’

The pharmacologist, who published his findings in a blog post, said the bizarre way of recording deaths is why there are such wide variations in daily figures.

For the duration on the pandemic, DHSC officials have said the drastically lower figure on a Monday is due to a lag in reporting over the weekend.

But Dr Loke and colleagues are not convinced this is the reason for the fluctuations in daily death figures.

Dr Loke said: ‘It seems that PHE regularly looks for people on the NHS database who have ever tested positive, and simply checks to see if they are still alive or not.

‘PHE does not appear to consider how long ago the Covid-19 test result was, nor whether the person has been successfully treated in hospital and discharged to the community.

‘Anyone who has tested Covid-19 positive but subsequently died at a later date of any cause will be included on the PHE Covid-19 death figures… even if they had a heart attack or were run over by a bus three months later.’

It is currently impossible to know how many of the deaths announced by the Department of Health were not actually caused directly by Covid-19.

The ‘statistical flaw’ should not drastically affect the total number of deaths – currently at 45,961.

But it does mean the ongoing death toll appears worse than the reality, experts say.

Dr Loke told MailOnline: ‘This is a very serious issue for public confidence.

‘When you go onto social media you will see hundreds of posts from rightly anxious people who are petrified at the seemingly relentless, unyielding daily death toll in England. The public are scared.

‘The public are asking questions about why England is doing so badly, when actually the truth is that the healthcare professionals in NHS are doing a great job in ensuring thousands of Covid survivors. The statistics here are misleading the public.’

WHAT ELSE HAS PUBLIC HEALTH ENGLAND COME UNDER FIRE FOR?

Public Health England has been in the firing line for a number of dubious decisions taken during the coronavirus pandemic.

When the first cases of coronavirus appeared in the UK, Government policy was to test everyone who had symptoms after returning from abroad and to trace people they had come into contact with.

However, on March 12, testing and contact tracing stopped completely. PHE no longer had the capacity to test the amount of people who were coming into the country infected with the virus after trips to Italy and France in half-term.

The decision has since been branded disastrous and a contributing factor to the UK’s devastating outbreak.

Conservative MP David Davis told MailOnline this month that Public Health England had been over-controlling and made a mess of coronavirus testing.

The Tory MP said: ‘They made a complete mess of the testing arrangements; they were over-centralised, over-controlling and massively reduced our ability to test.’

He warned the decision – criticised heavily by top scientists at the time – then ‘handicapped’ later decisions and was ‘precisely the wrong thing to do’.

‘Before the winter crisis, the government has to reorganise this, whether that’s abolition or taking some of the powers away from them and giving them to someone else,’ he added.

Public Health England kept too much power over testing and contact tracing and should have delegated it to local authorities, one expert said.

Professor John Ashton, a former public health director, said Britain should have followed the example of Cuba where local teams went from house to house screening people for coronavirus.

He said: ‘The local public health level has been neglected. I think we’ve missed an opportunity because we should have made more use of primary care, local government and volunteers…

‘Instead what we did was a very top-down, London-centric approach.’