Ministers’ plan to get ALL children back in class in September

Whole year groups at secondary school will form ‘bubbles’ in a massive effort to get all children back in education from September, it was revealed today.

Education Secretary Gavin Williamson said the ‘unprecedented disruption’ must end as he unveiled plans for a full return from the beginning of the academic year, with staggered start times and strict classroom rules to minimise the risks of spreading the virus.

Every school in England will reopen ‘come what may’ in September – with sources insisting even if the R rate surges other parts of society will be closed down first to facilitate the move.

Guidance published today states that 30-strong classes can form ‘bubbles’ in primaries, and whole year groups in secondaries – potentially hundreds of children. Social distancing rules can be dropped within bubbles to ensure there is capacity, and parents will face fines if they refuse to send their children.

However, whole classes or year groups could be ordered to self-isolate – along with their families – if just two pupils test positive in a fortnight. Entire schools could be shut, although the guidance suggests it will not ‘generally be necessary’.

The curriculum taught must be ‘broad and ambitious’, but teachers are instructed to use ‘flexibility’ to prioritise the most important content that pupils have missed.

Underlining the scale of the disruption faced by children, the advice concedes the curriculum might not be back to normal until summer next year.

‘Substantial modification to the curriculum may be needed at the start of the year, so teaching time should be prioritised to address significant gaps in pupils’ knowledge with the aim of returning to the school’s normal curriculum content by no later than summer term 2021,’ the guidance said. 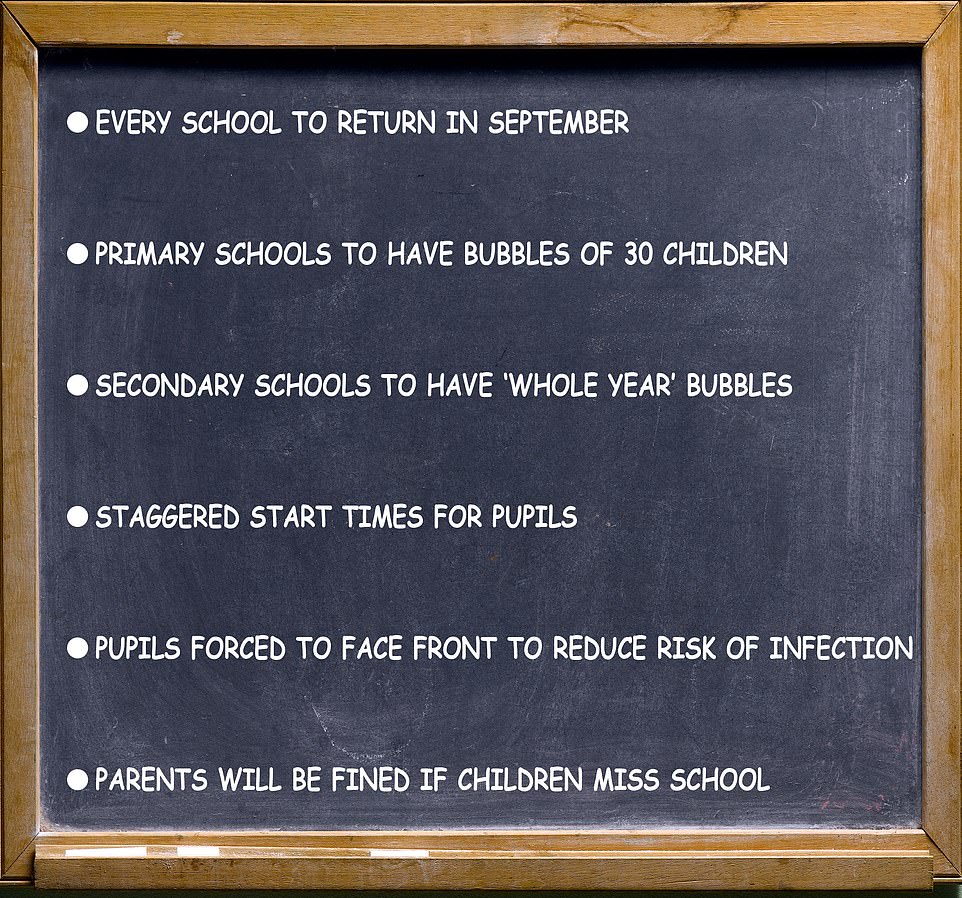 How will the plan for all schools to return in September work?

Under the new arrangements, primary schools will be able to operate ‘bubbles’ of more than 30 children, allowing the return of full classes.

Secondary schools, where children move between classes, could operate ‘whole year bubbles’ of more than 200 children.

Pupils will face staggered start times and will only be permitted to mix within their own ‘bubble’ of peers. They will be required to sit facing the front to reduce the risk of spreading the virus.

And schooling will be made compulsory again, with parents facing £60 fines if they fail to send their children to school.

But action will be required if just two coronavirus cases are identified among pupils in a two-week period.

Whole year groups of entire schools may be told to stay at home and self-isolate – along with their families – as a precautionary measure.

If the situation is serious, the guidance does not rule out shutting schools altogether.

The guidance states that the curriculum must ‘remain broad and ambitious’, and ensure that ‘all pupils continue to be taught a wide range of subjects, maintaining their choices for further study and employment’.

But it says teachers should ‘make use of existing flexibilities to create time to cover the most important missed content’.

Mr Williamson has secured £1billion for a catch-up plan that will allow schools to hire tutors to provide catch-up classes for small groups.

Final sign off for the back-to-school plan will not be given until mid-August, based on an assessment of the state of the epidemic.

Although children face only a very low risk from the disease, some scientists fear that the reopening of schools could lead to a significant rise in community transmission of the virus.

But a Cabinet source said ministers were determined to reopen schools in September, even if that meant other parts of society have to be shut down.

‘Schools will reopen in September, come what may,’ the source said.

‘Everyone can see how important it is, not just to children’s education but to the ability of parents to get back to work. Obviously we have to see what happens to the epidemic but the plans are there now for a safe return.

‘Hopefully the virus will continue to decline over the summer. But even if the R-number [the number infected by a carrier] is up near one, I think people are clear that schools have to reopen.

‘That might mean something else closing in order to keep the overall risk at an acceptable level, but schools have to reopen.’ 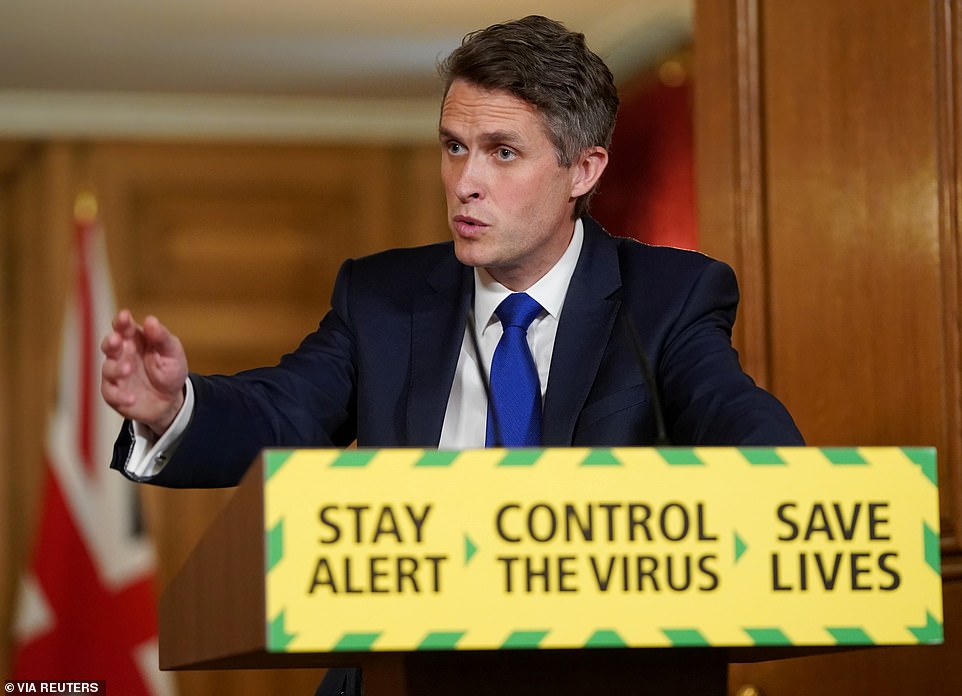 Pupils will face staggered start times and will only be permitted to mix within their own ‘bubble’ of peers. They will be required to sit facing the front to reduce the risk of spreading the virus

Mr Williamson is expected to say Ofsted will not begin full school inspections again until January, but visits will be made to a handful of schools.

Schools have also been told to improve their online resources for home-schooling in case an outbreak forces pupils to self-isolate at home.

Parents have already complained about the variable quality of virtual teaching at different schools, an issue compounded by the Governmen’s failure to provide 230,000 laptops and tablets for the most disadvantaged pupils.

New figures show 202,212 laptops were delivered or dispatched to pupils by Tuesday, 88 per cent of the number the education secretary had promised. 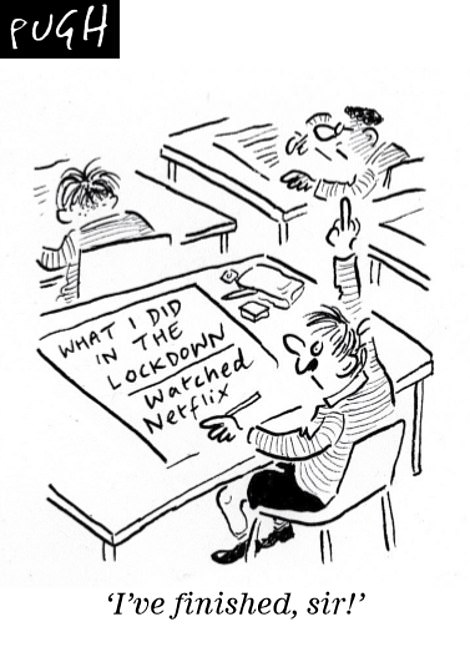 It is believed said some devices are being sent out without the passwords needed to access it, and the numbers do not cover every disadvantaged child.

‘Six are sitting in the office, password protected and can’t get into them,’ one head teacher told the publication.

Another said: ‘We have ours but they are locked with passwords no one will let us have.’

Mr Williamson defended the scheme at an education select committee: ‘We are already in the process of rolling out IT equipment across the school estate, as well as to the most vulnerable children.

‘Some 100,000 of those laptops have already been distributed to the most vulnerable and most disadvantaged children . . . We are on schedule to dis- tribute the full 230,000 computers over the coming month.’

Ministers are now braced for a battle with the education unions over the details of the plans for a full return in September.

But officials point out that the Government’s Scientific Group for Emergencies has already concluded that teachers are at no higher risk than other professions.