The club owner who employed the Minneapolis police officer charged with killing George Floyd said he used ‘overkill’ methods when subduing crowds while he worked off-duty as a security guard there.

Maya Santamaria, former owner of El Nuevo Rodeo club in Minneapolis, said that both Officer Derek Chauvin and Floyd worked as security guards at the Latin nightclub as recently as last year, but that she’s not sure if they knew each other.

What she is certain of is how aggressive Chauvin became when the club hosted events that drew a mainly black clientele.

Officer Derek Chauvin (in blue) and George Floyd worked at the same nightclub, but may not have known each other prior to Chauvin arresting Floyd (on ground), leading to Floyd’s death 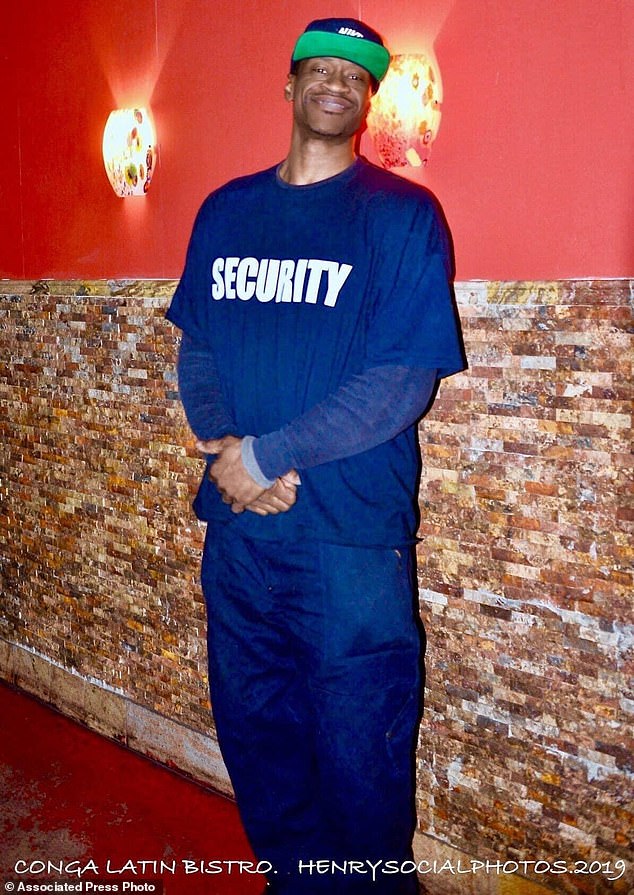 Floyd (pictured) died in police custody on May 25, after Chauvin was caught on video kneeling on his neck. Floyd is seen in February 2019 while working at Minneapolis’ Conga Latin Bistro

She said he responded to fights by taking out his mace and spraying the crowd, a tactic she told him was unjustified ‘overkill.’

‘He would mace everyone instead of apprehending the people who were fighting,’ said Santamaria. ‘He would call backup. The next thing you would know, there would five or six squad cars.’

While Chauvin’s off-duty job at the El Nuevo Rodeo club stretched over 17 years until a few months ago, Floyd only started working there recently as a bouncer and only worked about a dozen events put on by ‘African American promoters.’

Santamaria, who sold the venue within the past two months, said she doesn’t believe the two men knew each other prior to their fateful encounter Monday night.

If Chauvin had recognized Floyd, she said, ‘he might have given him a little more mercy.’ 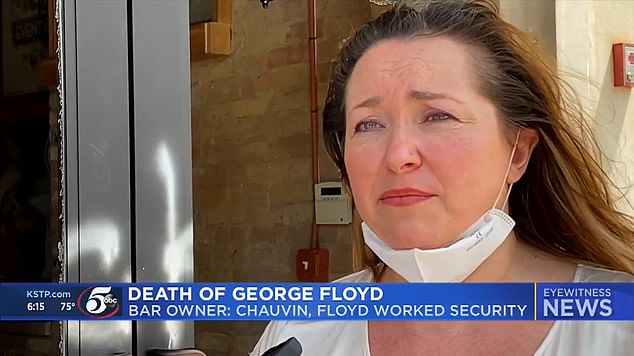 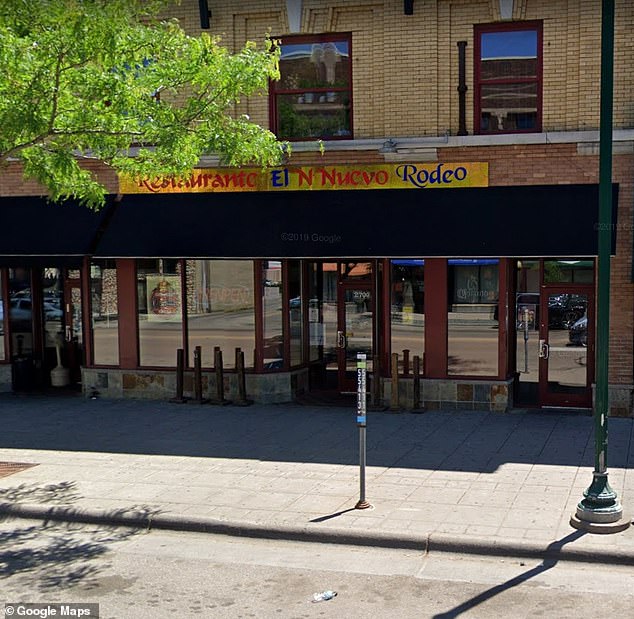 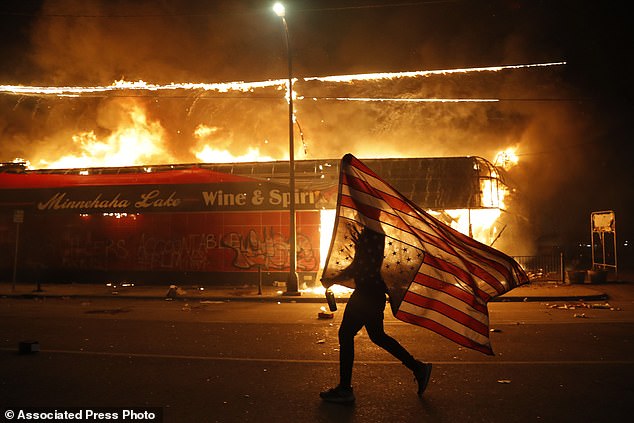 Floyd’s death in custody kicked off protests in Minneapolis. A protester is pictured in front of a burning building in the city on May 28 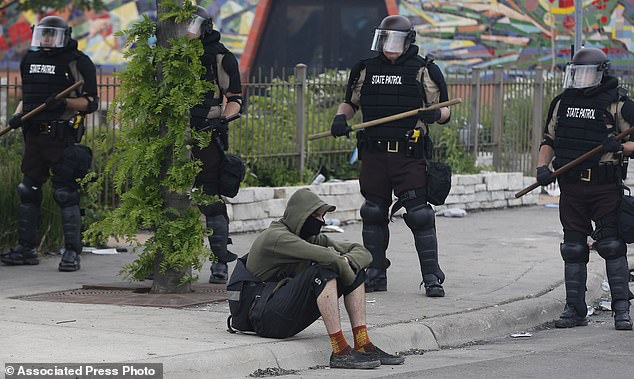 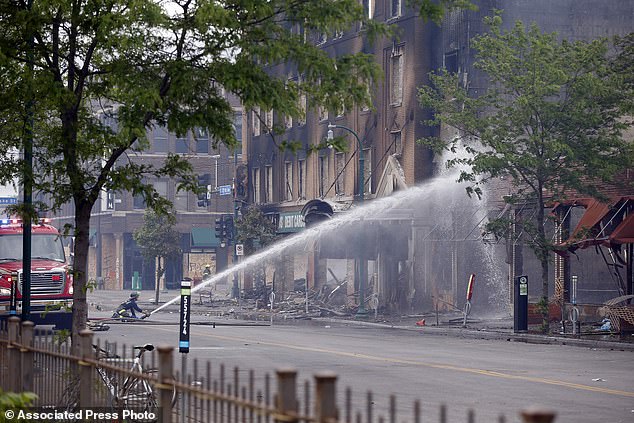 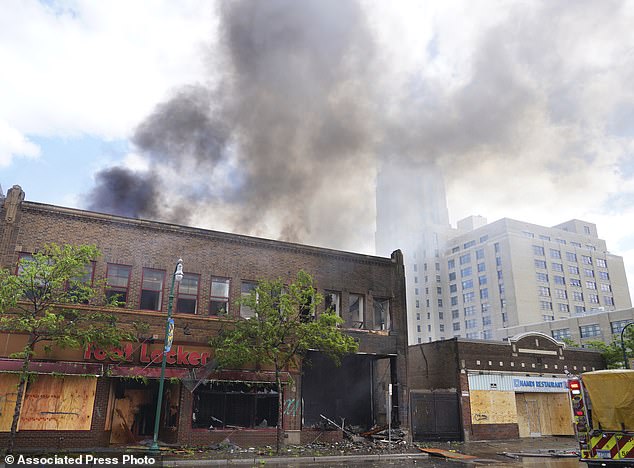 She said Chauvin got along well with the club’s Latino regulars, but his tactics toward unruly customers on what she referred to as ‘African American’ nights led her to speak to him about it.

‘I told him I thought this is unnecessary to be pepper-sprayed. The knee-jerk reaction of being afraid, it seemed overkill,’ Santamaria said. ‘It was a concern and I did voice my opinion, but police officers have a way of justifying what they do.’

She said she was shocked to see the video of Chauvin pinning Floyd to the ground with his knee, even as Floyd complained that he couldn’t breathe.

‘I thought he would have more of a conscience,’ she said. ‘Even if he is a bit of racist, he’s a human being. … At what point does your humanity overpower your racial bias?’

Outside Chauvin´s home in Minnesota on Thursday, a message of anger aimed at the former officer was painted in red on his driveway: ‘murderer.’

On Friday, protesters gathered in front of another Chauvin home in Windermere, Florida, which he has owned since 2011 with his wife, Kellie, a Laotian refugee, realtor and former Mrs. Minnesota pageant winner.

Both Chauvin and his wife have registered to vote there, rather than in Minnesota, records show. Chauvin last cast a ballot in Florida in November 2018. His wife´s registration is listed as inactive. Both are Republicans.

‘I don´t mind peaceful protests at all,’ said Oscar Reyes who lives across the street in the quiet neighborhood near Orlando. ‘I hope everything stays safe.’