A couple suspected of drug-smuggling have been pictured in a bizarre set of mug shots after they were arrested on suspicion of transporting $1million worth of methamphetamine from Arizona.

Campbell’s head is partially shaven in patchy form with a deflated Mohawk in the middle and scruffy tufts of hair on the sides.

The woman, of Rochester, appears frazzled with thick and messy eyeliner on her lids as she sits in a hooded top for her booking photograph. 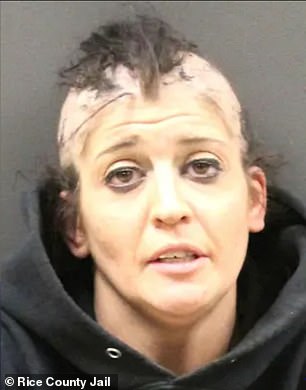 Lucas Jay Madison (left), 39, and Katherine Byrd Campbell (right), 32, were arrested April 14. Madison was charged with a Controlled Substance Crime in the 1st Degree with enhancements for aggravating factors and importing across state borders. Campbell was charged with aiding and abetting

They were busted on April 14 amid an investigation by the Cannon River Drug and Violent Offender Task Force (CRDVOTF) which had learned Madison had been making frequent trips between the states to bring back large quantities of illegal substances.

Agents were able to determine what vehicle Madison and Campbell were traveling in and tracked their journey from the air and on the ground.

They conducted a traffic stop on the couple on the I-35 in Rice County and a K9 alerted officers to the passenger compartment where ‘a large quantity of suspected methamphetamine’ was found.

After obtaining a warrant, cops searched the rest of the vehicle and the couple was arrested.

While Madison and Campbell were held at the Rice County Jail pending arraignment, a detailed search of the vehicle found that they were transporting methamphetamine that weighed over 25 pounds with packaging.

Sold on the street at gram level, it was worth nearly $1million. Agents seized over $17,000 dollars relating to the investigation.

Travel documents, boarding passes and car rental agreement help substantiate that police believe that Madison had been making the trips for a long time in order to obtain the drugs with intention to sell on to dealers. 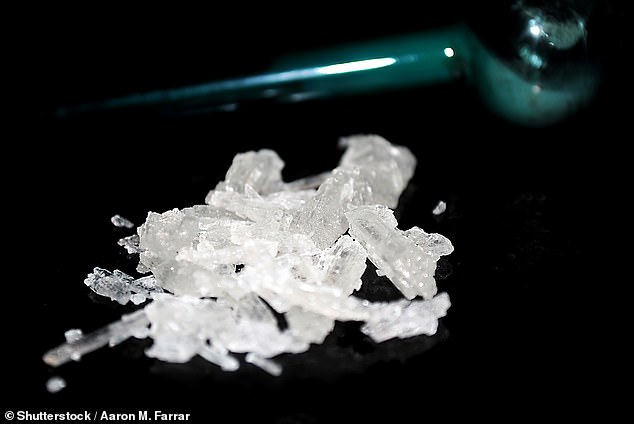 Sold on the street at gram level, the methamphetamine found was worth nearly $1million. Agents seized over $17,000 dollars relating to the investigation

‘It is unfortunate that criminal activity like this occurs, even more so during these trying times in our society, CRDVOTF Commander Paul LaRoche said.

‘This case, in particular, was a large scale investigation involving multiple law enforcement partners, I am proud of how well all worked together to intercept this large quantity of meth and prevent it from being distributed in our state.’

Madison was charged with a Controlled Substance Crime in the 1st Degree with enhancements for aggravating factors and importing across state borders. He remains jailed on $1million bond.

Campbell was charged with aiding and abetting the importation of a controlled substance across state borders. She has since been released from jail on bond.

Madison has three prior drugs convictions on his record. Over the past 20 years he has also been convicted on weapons possession, fleeing police, theft, counterfeiting, driving under the influence, property damage and domestic assault.

Campbell has three prior drugs convicted on her record in the state.