It should have been a homer, but a ball in play got stalled by a wall when, bizarrely, it got wedged firmly in the seam.

Minnesota Twins second baseman Brian Dozier was playing against the Detroit Tigers when he struck what should have been a home run at Target Field, Minneapolis.

Instead, the ball missed its intended trajectory by inches, as it got stuck in the top of the Target Field wall on Wednesday.

Minnesota Twins second baseman Brian Dozier about to work his magic during the game against the Detroit Tigers, who were trying to end a five-game losing streak 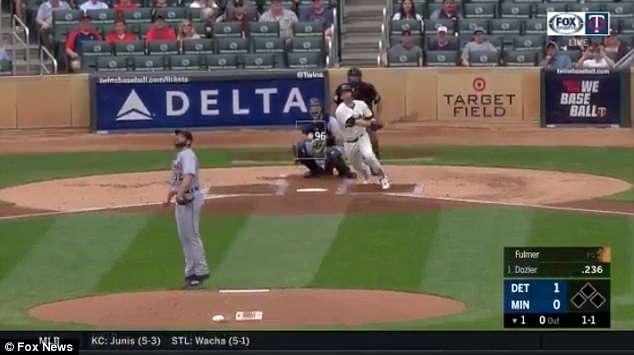 Looking forward to hitting a home run for his team, Dozier gazes skywards after striking the ball hard into the air 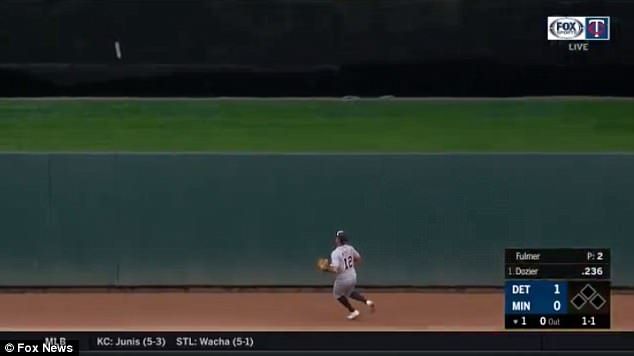 Going in for an unlikely catch as the ball heads for the Target Field wall despite being a potential homer, as the ball starts dropping 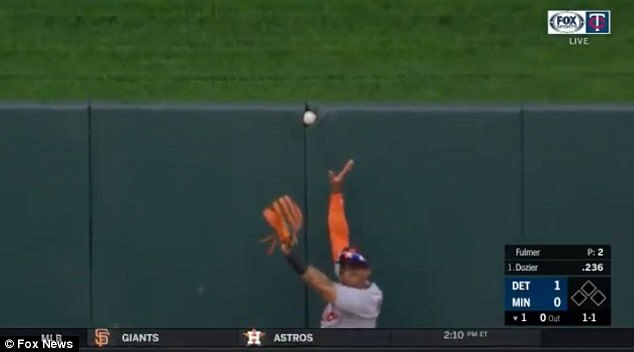 The ball became firmly stuck in the seam at the top of the eight-foot wall in center field at Target Field, Minneapolis 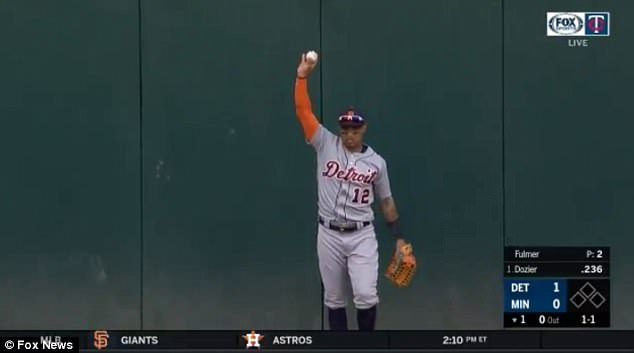 Lamenting the near-miss, the team said: ‘That’s about as close to a home run as you can get without, you know, actually hitting one.’

Twins’ reporter Rhett Bollinger said that when he spoke to Dozier about the ‘weird play postgame’, the player joked that he might require extra strength-building exercises and more sugar: ‘maybe eating a couple more biscuits in the morning would do the trick’.

Dozier said that it was not unusual to see the ball trapped in the ‘padding like halfway up, but never at the top. I need to [spend time with] our strength coach a little bit’.

As the ball was wedged in the wall, this resulted in a ground-rule double, where all offensive players are awarded two bases after a ball, after being hit fair, goes out of play – something that normally occurs when it bounces from the field into the stands.

Bollinger pointed out: ‘The wall could only delay Dozier from scoring, as Eddie Rosario brought him in from second on an RBI [run batted in] single two batters later.’

Despite that, the Tigers beat the Twins 4-1.