A baby is one of just five people in the UK to suffer from a condition that caused him to be born with back-to-front legs and no buttocks.

Tracy Fletcher gave birth to Baron last month. He has caudal regression syndrome (CDS), which has also left him with clubbed feet and no control over his lower body.

Ms Fletcher, 39, from Cheltenham, was advised to abort her pregnancy after the rare condition was picked up at a 20-week scan.

Despite being warned Baron would never walk, as well as suffer severe kidney, bowel and bladder problems, Ms Fletcher continued with the pregnancy.

‘We’ve accepted that if he’s disabled we’ll help as much we can. We don’t want him brought up any differently to any other baby,’ Ms Fletcher said.

Baron was born last month with his legs back to front due to a rare condition that affects just five people in the UK. Although his parents Tracey Fletcher and Edward were aware of what was coming, she described his legs as being ‘almost parallel with his shoulders’ 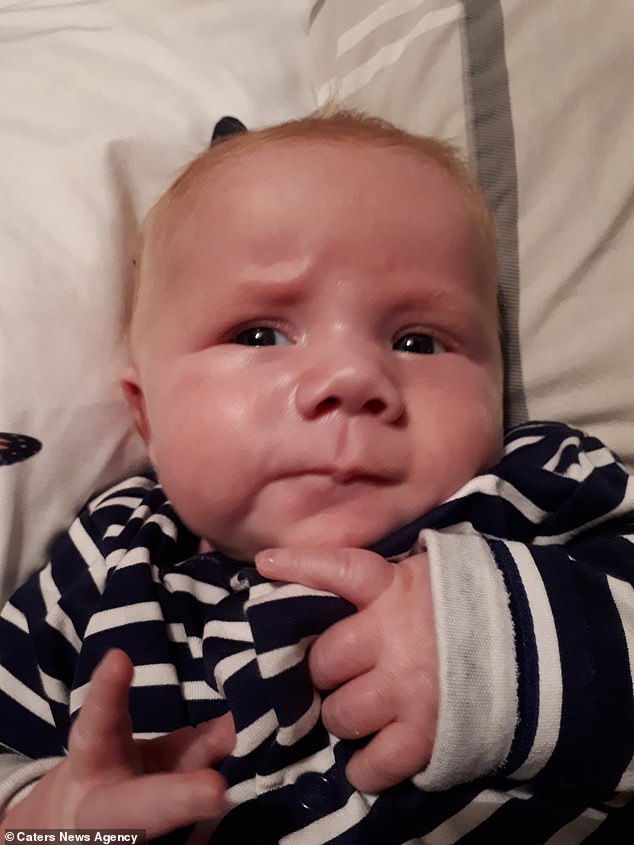 Baron will never be able to walk and is set to suffer severe bladder, bowel and kidney problems

Ms Fletcher and her partner Edward, whose last name is unknown, first discovered something was wrong during a routine scan.

The care assistant said: ‘After the 20-week scan we immediately started wondering what quality of life he would have and if he’d have a chance of life at all.

‘The doctor said he’d be severely handicapped, would never walk and would have kidney problems, bladder and bowel problems.

‘But in the end, we decided to continue and to bring our child into the world.’

The youngster was delivered by two surgeons four weeks early. ‘After I came round they asked if I wanted to see him,’ Ms Fletcher said.

‘As they lifted the screen up, the full reality hit home of what we had to face. He looked a lot worse than we thought, his legs were almost parallel with his shoulders.

‘It was a very difficult moment and the first time I held him it was quite scary. A nurse said that in all of her 25 years she’d never come across a baby with the condition.’

The youngster was immediately put into an inducted coma after his lungs filled with fluid and was only able to go home three weeks later.

‘While he was intensive care I was with him every single day and he just looked so alone and helpless,’ Ms Fletcher said.

Although Baron is now home from his stint in hospital, the family still face challenges every day.

‘We can’t dress him properly because of the position of his legs and he can’t kick them,’ Ms Fletcher said.

‘He has no feeling in his legs or across the lower part of his body but has recently started to move in some areas.

‘He’s making so much progress each and every day but we’re unsure what quality of life he’ll have. In spite of everything he’s happy all the time.’ 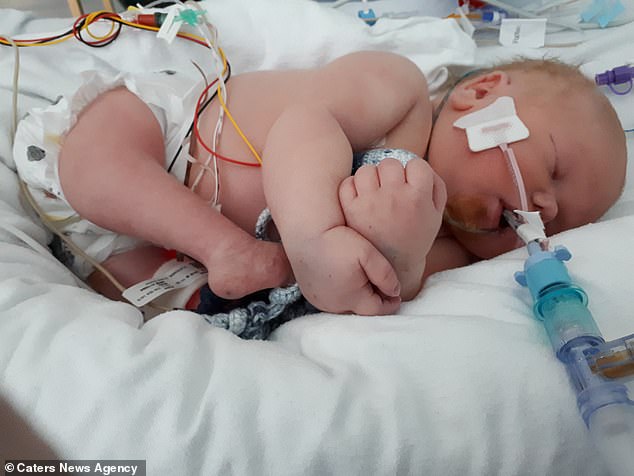 The rare disorder also means Baron has a clubbed foot. The newborn is pictured in an induced coma, which he stayed in for three weeks, after being delivered with fluid filling his lungs 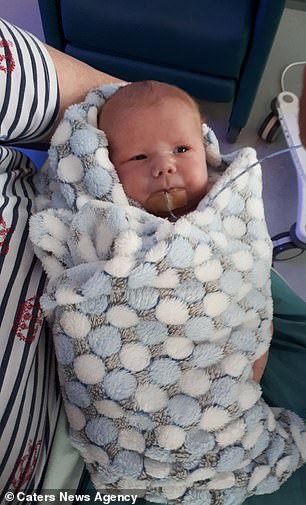 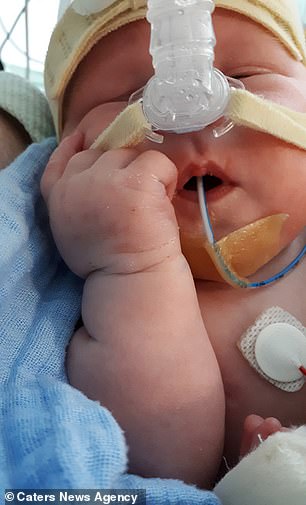 Ms Fletcher found holding Baron (pictured left after waking from his coma) for the first time ‘scary’. While in intensive care (right) she said he looked ‘so alone and helpless’ 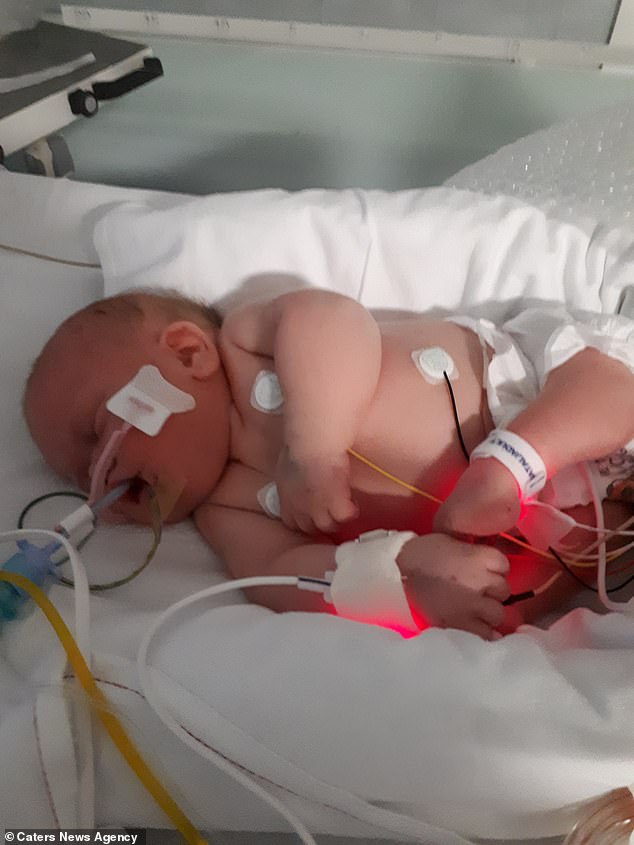 Pictured in a coma, Baron’s parents were advised to terminate the pregnancy after the disorder showed up on a 20-week scan. Deciding to persevere, the newborn was delivered by C-section four weeks early before immediately being rushed to intensive care

Writing on their GoFundMe page, Ms Fletcher claims Baron will require surgery on his hips, legs and spine in the future. She is fundraising £850 for a specialist car seat.

His parents are determined to give Baron the best life they can and insist he will be treated no differently from any other child.

‘He’ll definitely be in a wheelchair. We’ve accepted that if he’s disabled we’ll help as much we can,’ Ms Fletcher said.

‘We want to give him the best possible life, he’s loved by everyone. He’s got a lovely, heartwarming smile.

‘Despite everything he’s been through and what he has to face on a daily basis, he’s turning into the most wonderful little boy.’ 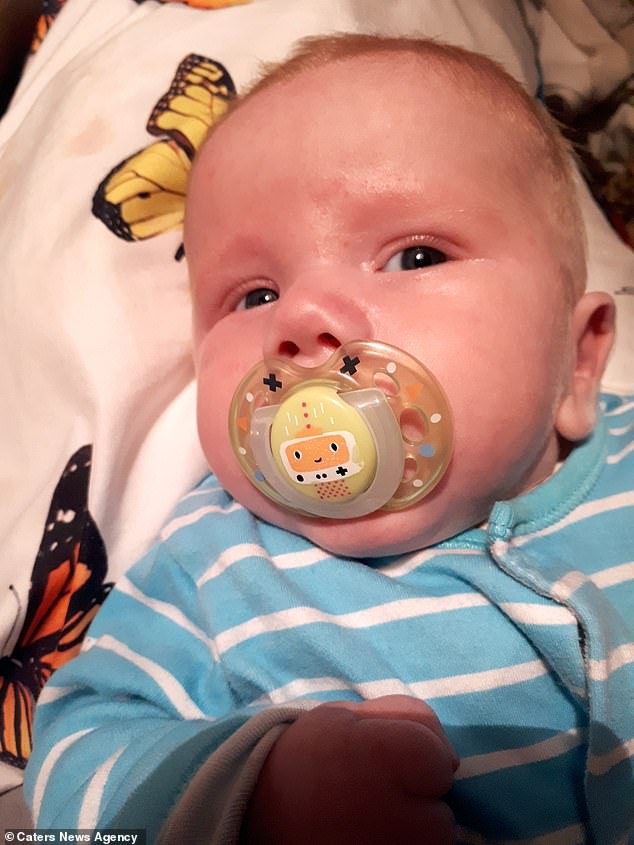 Now home, Baron has started to make progress and surprised people with his movement 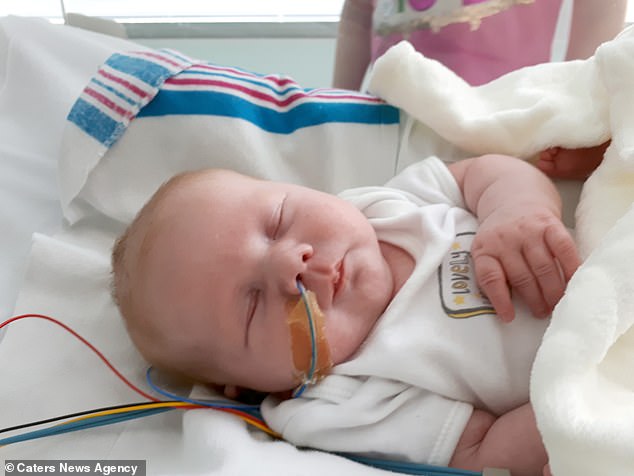 Pictured in hospital, Baron’s parents are determined to give him the best quality of life possible

WHAT IS CAUDAL REGRESSION SYNDROME?

Caudal regression syndrome (CRS) affects the development of the lower half of the body, which can include the spine, limbs, bladder, bowels and gut.

The bones in the lower spine can be abnormal or missing, with spinal abnormalities often also affecting the chest, which makes breathing difficult.

Some patients also have abnormal hip bones, flat buttocks, underdeveloped legs and clubfeet. Kidney abnormalities, including them being absent or fused together, as well as bladder problems are also common.

CRS is associated with a woman suffering from diabetes while pregnant. This is thought to be due to high blood sugar levels harming foetal development. However, random cases also occur.

There are only five reported cases in the UK, however, as many as one in every 20,000 births in the US are said to be affected to some extent.

Prognosis is poor with severe newborns often not surviving the first few weeks due to heart, kidney or breathing complications.

Those who survive are typically cognitively normal but have disabilities of their lower limbs, as well as reduced control over their bladders and bowels.

Treatment usually focuses on helping the patient live as normal a life as possible.