DailyMail.com can exclusively reveal that just months after Miranda, 34, split from musician Anderson East, she began a relationship with married Evan Felker, the 34-year front man of the band Turnpike Troubadours.

‘Miranda stole Evan from Staci,’ a close friend of abandoned and devastated wife Staci Felker told DailyMail.com. ‘There’s no doubt about it.’

According to the friend, Evan and his band were invited to be the opening act for Miranda’s current tour Livin’ Like Hippies, which began in January and runs through June. 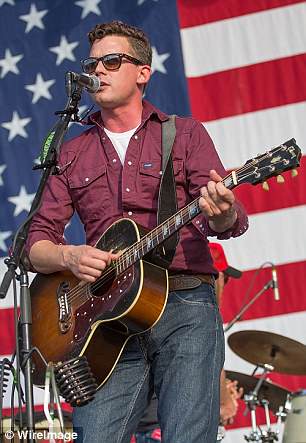 Just months after Miranda Lambert (left), 34, split from musician Anderson East, she began a relationship with married Turnpike Trubadours frontman Evan Felker, pictured right, who was married at the start of their relationship 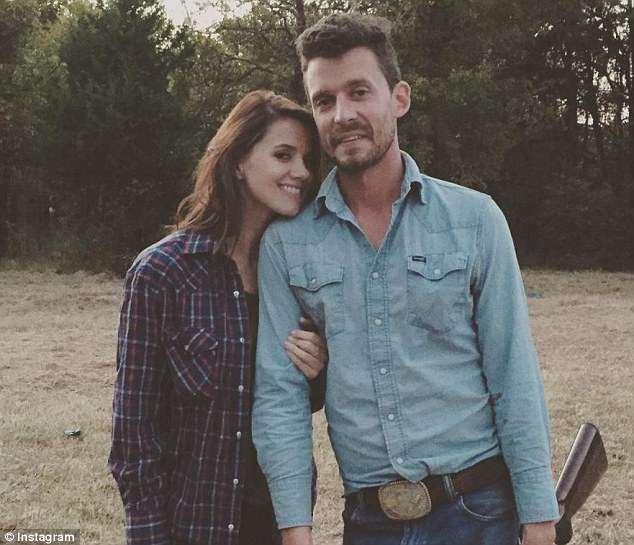 Evan Felker (right) filed for divorce from his wife, Staci (left), on February 16, just a month after he joined Lambert’s Livin’ Like Hippies, which began in January and runs through June

But a few weeks before the tour began, Evan started receiving private text messages from Miranda.

At first the text messages were professional enough, explained the insider. Miranda told him how excited she was that his band – Turnpike Troubadours – was going to be opening for her.

The Tin Man singer told him that she wanted to write songs with him.

‘Evan was excited about the prospect of being able to co-write with a country legend, it would take him to another level of stardom,’ said the friend.

Then the texts ‘went from friendly to flirty. Miranda started sending Evan selfies, nothing risqué or provocative’.

But the selfies and text messages made Evan feel uncomfortable, so much so he showed them to his wife, Staci, the woman he married in September 2016.

Evan asked Staci to go on tour with him but she couldn’t.

‘She trusted Evan and had no worries that he would ever be unfaithful to her,’ explained the friend. ‘She has a professional job and just couldn’t get up and leave it and take time off whenever she wants to.’ 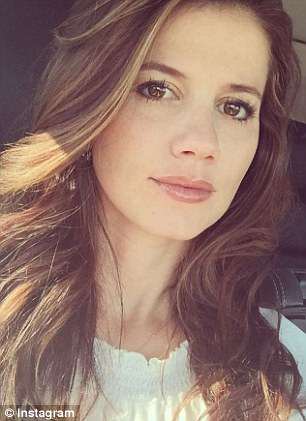 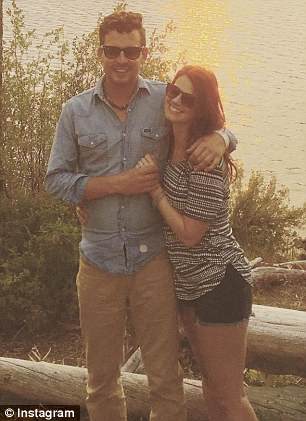 Evan had asked Staci if she wanted to join him on tour, but she couldn’t because of her job. He then stopped answering her texts and calls once on the road 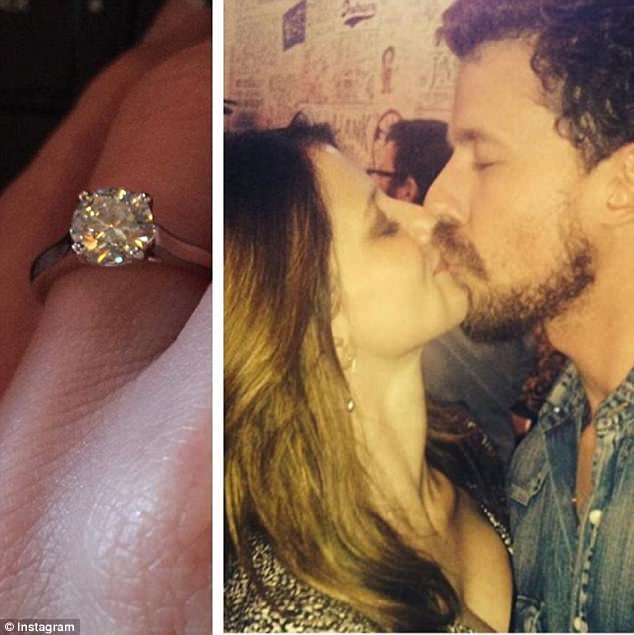 Staci and Evan, pictured kissing right, married in September 2016. They got engaged in late 2015 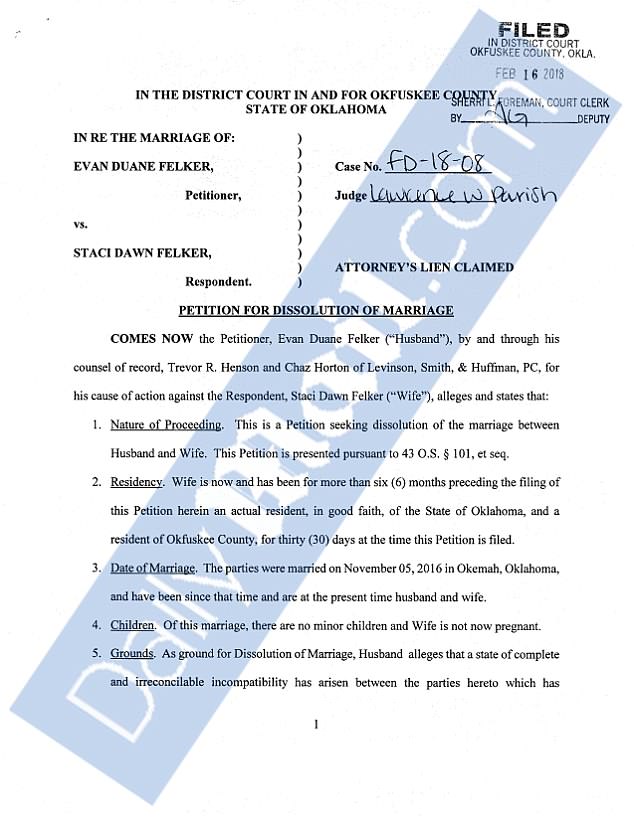 In divorce papers filed on February 16 (pictured), Evan stated that reason for divorce was because of irreconcilable differences ‘which has completely destroyed the legitimate aims of the marriage and rendered its continuation impossible’ 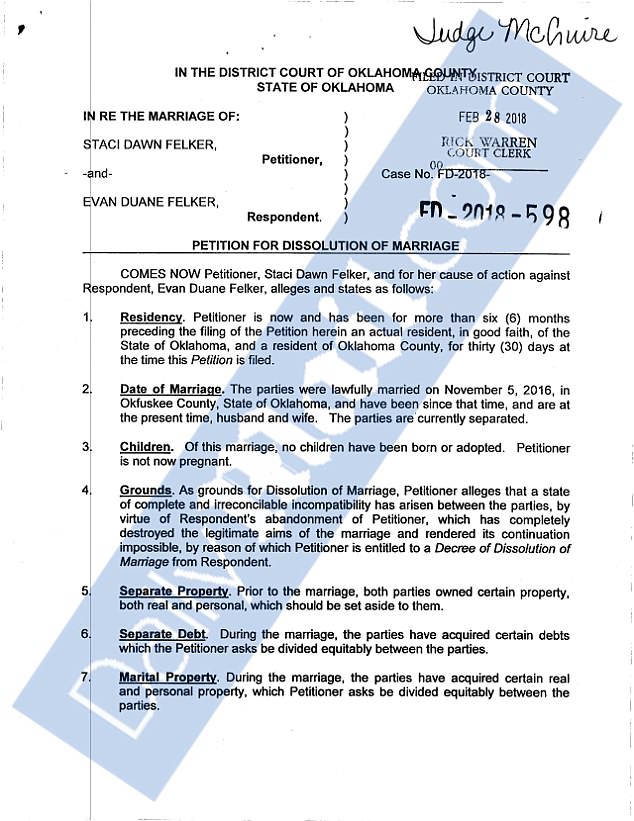 Twelve days after Evan filed for divorce, Staci filed her own divorce papers on February 28 (pictured). In her divorce documents Staci accuses Evan of abandoning her as the reason for divorce. She is also asking for alimony

But after a three-date tour ended at the end of January, Evan didn’t come back to their home in Oklahoma.

Staci desperately tried calling him for days, with no response. She later believed he blocked her number.

On February 16, she was served with divorce papers.

In the divorce papers, exclusively obtained by DailyMail.com, Evan stated that reason for divorce was because of irreconcilable differences ‘which has completely destroyed the legitimate aims of the marriage and rendered its continuation impossible’.

‘When she received the divorce papers it caught her by surprise,’ said the friend.

‘The last time I saw Evan he loved me,’ Staci told the friend.

Then just days after Evan filed for divorce, Staci heard from several mutual friends and people in the music industry that Evan was with Miranda Lambert.

‘It was not a well-kept secret,’ added the source.

Staci tried calling him again but he wouldn’t answer. Finally 12 days after Evan filed for divorce, Staci filed her own divorce papers on February 28.

In her divorce documents Staci accuses Evan of abandoning her as the reason for divorce. She is also asking for alimony. 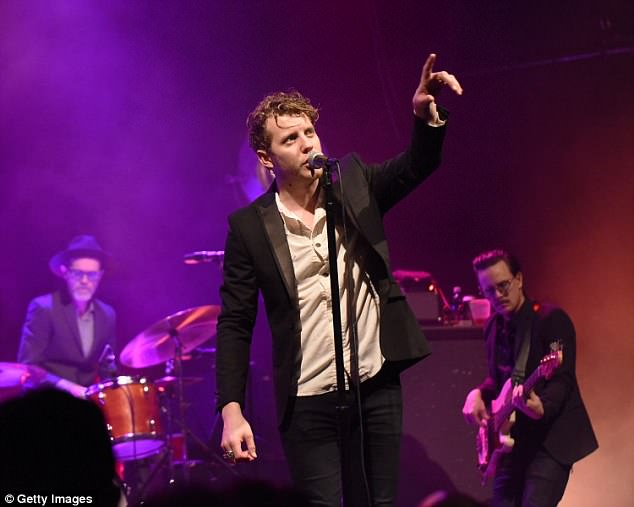 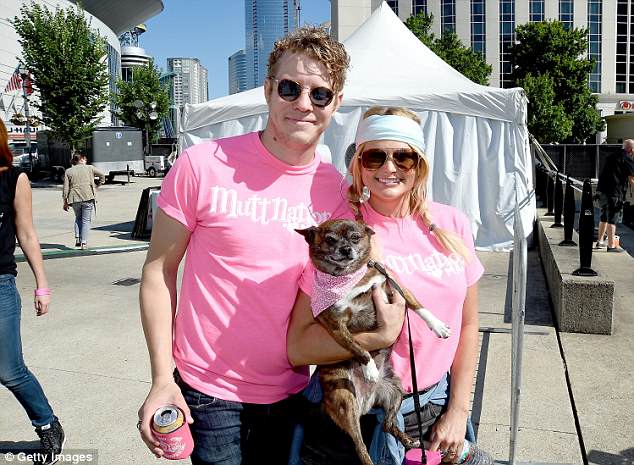 Staci hadn’t heard from Evan since the end of January, but he finally called her and fessed up to being with Miranda, the friend tells DailyMail.com

Evan told Staci he had been in Lake Tahoe with Miranda ‘writing’.

‘For weeks Evan had ghosted Staci,’ says the friend. ‘Staci started screaming at him, begging him to come home.

‘Evan told her that he was coming back soon but sort of played it off… as to not irritate Staci anymore and just say whatever he could just to get her off the phone.’

Now Staci is resigned to the fact that her marriage is over and not only blames her husband, Evan but Miranda.

‘Miranda is always talking about being a strong women and girl power, it’s a bunch of baloney,’ added the friend. ‘She stole another women’s husband. She’s a black widow spider.’

This isn’t the first time Miranda has been accused of stealing another woman’s man.

In an interview in 2011 with Dateline NBC, Miranda admitted that she knew her then husband, Blake Shelton was married when she first met him.

‘I had seen their wedding picture in Country Weekly,’ Lambert continued. ‘I knew better, like this is off limits… Because my parents are private investigators, for God’s sakes.

‘I’ve seen this my whole life, affairs. And I’m like, “If all people didn’t know better, I know better than this”.’ 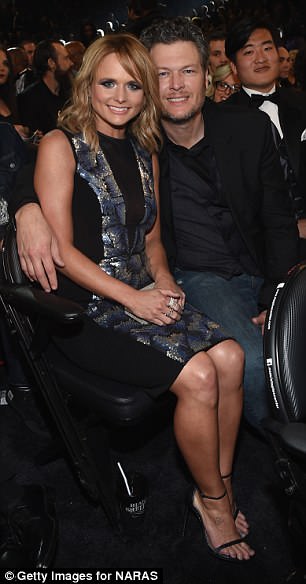 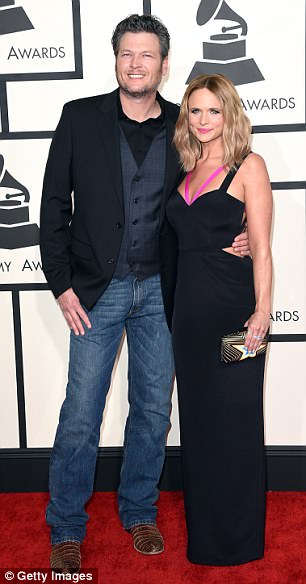 Miranda Lambert has a history of dating married men. When she met husband Blake Shelton in 2005, he was married to Kaynette Williams. Miranda and Blake married in 2011 and divorced in 2015 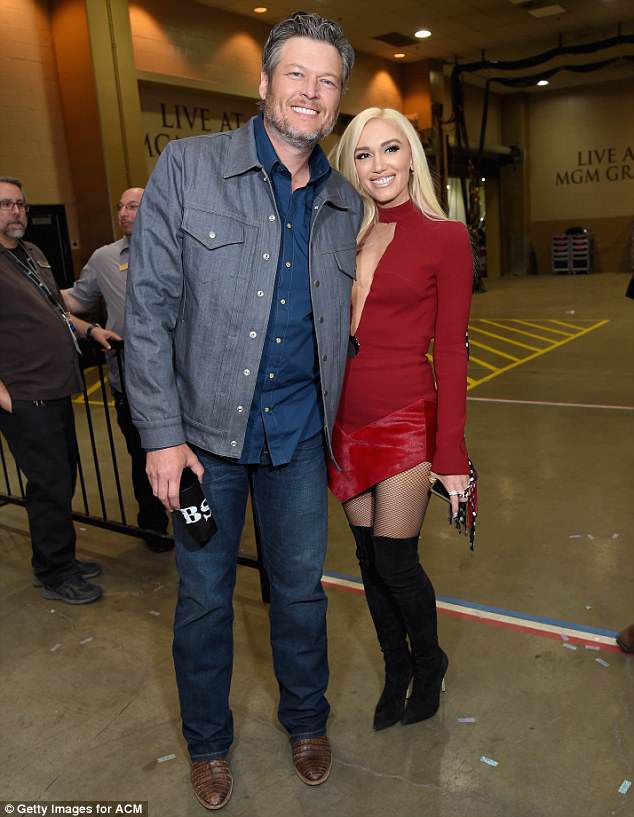 Miranda, however, lost Blake Shelton to Gwen Stefani (pictured together above). Blake and Miranda announced their separation in 2015, the same year he started dating Stefani

‘Karma’: The 41-year-old wrote about how he’s kept quiet and ‘taken the high road’. It’s long been rumored that Miranda cheated on him when they were married

In 2005 Miranda and Blake sang a duet ‘You’re the Reason God Made Oklahoma’ together for a CMT special.

‘It was like my first duet with some other country star,’ Miranda recalled. ‘And I didn’t know if it was just initial butterflies because of that or, I don’t know what it was. It was just this draw to each other.’

At the time Blake had been married to Kaynette Williams since 2003. They divorced in 2006. Williams cited in her ‘inappropriate marital misconduct’ in her divorce papers with Shelton.

Blake posted a cryptic tweet on Wednesday after news of Miranda’s romance with Evan broke.

The 41-year-old country music star wrote: ‘Been taking the high road for a long time.. I almost gave up. But I can finally see something on the horizon up there!! Wait!! Could it be?! Yep!! It’s karma!!’

Blake’s fans were quick to respond to the I Lived It hitmaker, with hilarious memes and tweets of support.

‘I think Miranda is using Evan,’ the friend told DailyMail.com. ‘She is going to chew him up and spit him out when she is finished with him. In the meantime he will have lost a great woman.’

Lambert’s spokesperson did not respond to DailyMail.com’s request for comment. Evan Felker would not comment when reached by DailyMail.com.