Meghan’s designer friend Misha Nonoo’s website has been updated to label a skirt as ‘recently worn’ by the Duchess – just a day after the royal sported it at her charity cookbook launch.

The Duchess of Sussex, 37, wore the designer’s $250 (£190) ‘Saturday’ skirt on Thursday, at a reception celebrating the launch of her Together: Community Kitchen cookbook, supporting families affected by the devastating Grenfell Tower fire.

And Misha, 31, was quick to gush over her friend’s choice of skirt, saying she was ‘truly honoured’ the piece was worn by the royal to celebrate the ‘brilliant project’.

The designer – who is widely believed to be Meghan and Prince Harry’s matchmaker – also shared details of how to buy the black pleated skirt with fans on Instagram Stories.

Meghan’s designer friend Misha Nonoo has been quick to promote her label’s pleated skirt, which was worn by the Duchess of Sussex at the launch of her charity cookbook on Thursday. Meghan was joined by mother Doria and Prince Harry at the event

On her website, the product description for the Saturday skirt reads: ‘Recently worn by Meghan Markle and great for any day of the week’.

The Saturday skirt is ‘made on-demand’, with the brand explaining how the item will be shipped approximately 10 business days after orders are made.

Meghan paired the black pleated skirt with a $300 (£230) cashmere bodysuit from US label Tuxe and $1,195 (£905) blue coat from Canadian brand Smythe at the event  at Kensington Palace.

Following the reception, Misha posted on Instagram: ‘Very proud friend today as Meghan, Duchess of Sussex, launches “Together: Our Community Cookbook” with her lovely Mum and Husband by her side. 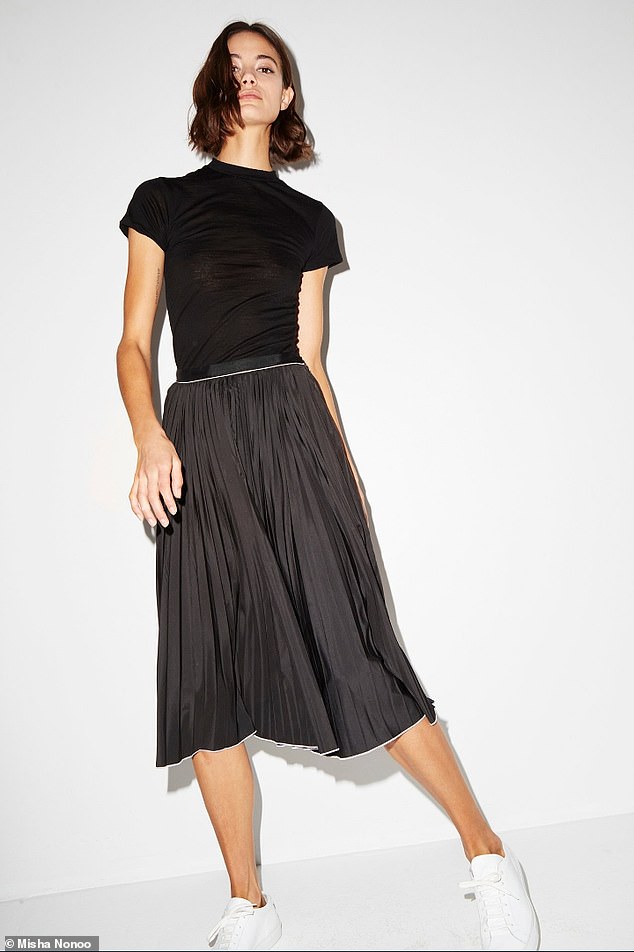 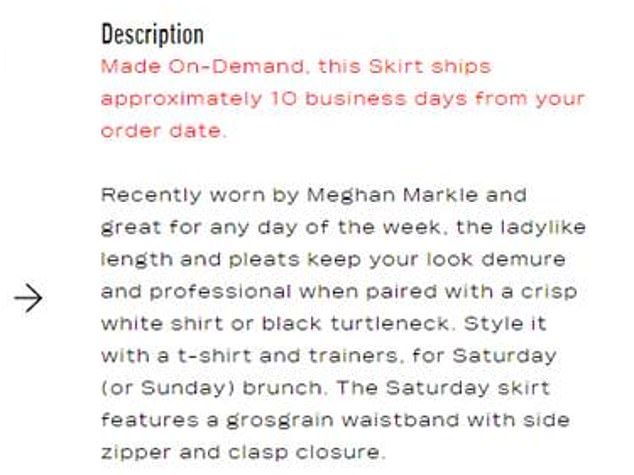 ‘This celebration of women and the strength of community in the face of adversity is beyond inspiring.

Posting on Instagram Stories, the designer added: ‘Meghan, Duchess of Sussex looking elegant in our Saturday skirt at the launch of her cookbook with the Hubb Community Kitchen’.

It comes after Misha was criticised for cashing in on her royal connections, after a sponsored post advertising the Husband Shirt worn by Meghan was circulated on Instagram. 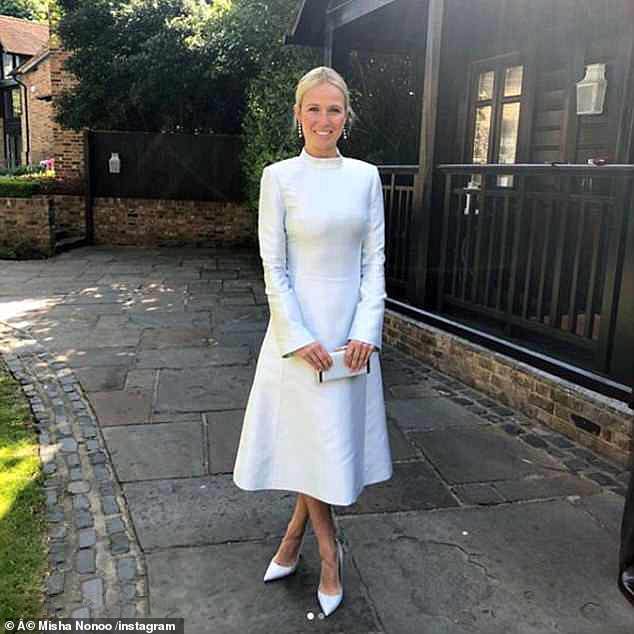 Misha (pictured at the royal wedding in May) was quick to gush over her friend’s choice of skirt, saying that she was ‘truly honoured’ that she had worn the piece 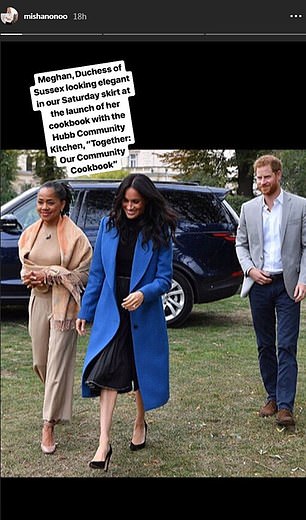 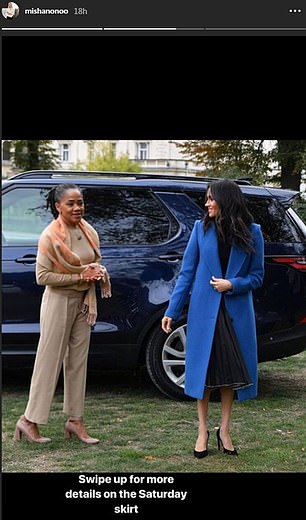 Misha also shared further photographs of the Duchess in the skirt on Instagram Stories, as well as including details of how fans could buy the skirt (right) 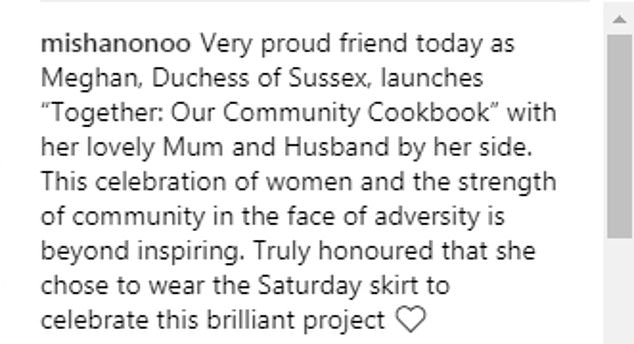 Posting on Instagram, Misha said she was a ‘very proud friend’, and described Meghan’s project as ‘beyond inspiring’

In the post that was circulated on Instagram, the $185 (£138) white blouse was described as ‘the shirt that sealed the deal’, alluding to Meghan’s romance with Harry.

The former Suits actress had worn the shirt at the Invictus Games in Toronto in September last year, just two months before her and Harry’s engagement was announced.

Criticising the ad, one Instagram user said: ‘One of Megan’s friends is already using the connection to try to flog shirts’

Misha regularly advertises The Husband Shirt on her Instagram feed, sharing a photograph of Meghan wearing the garment back in September, captioned: ‘MM in her MN shirt from our #Easy8 [collection]’. 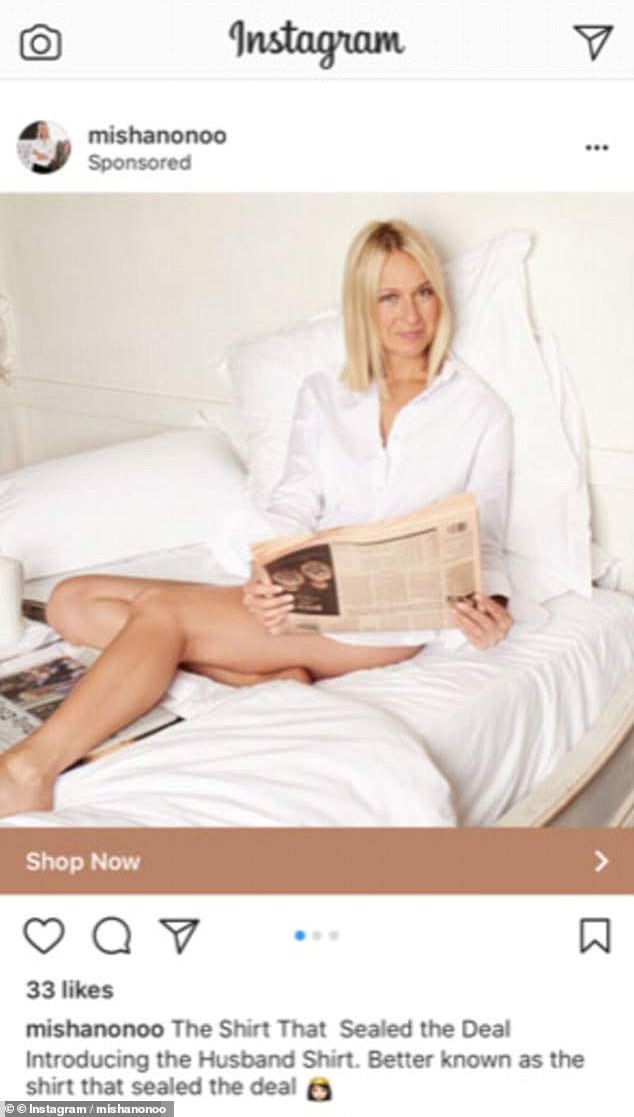 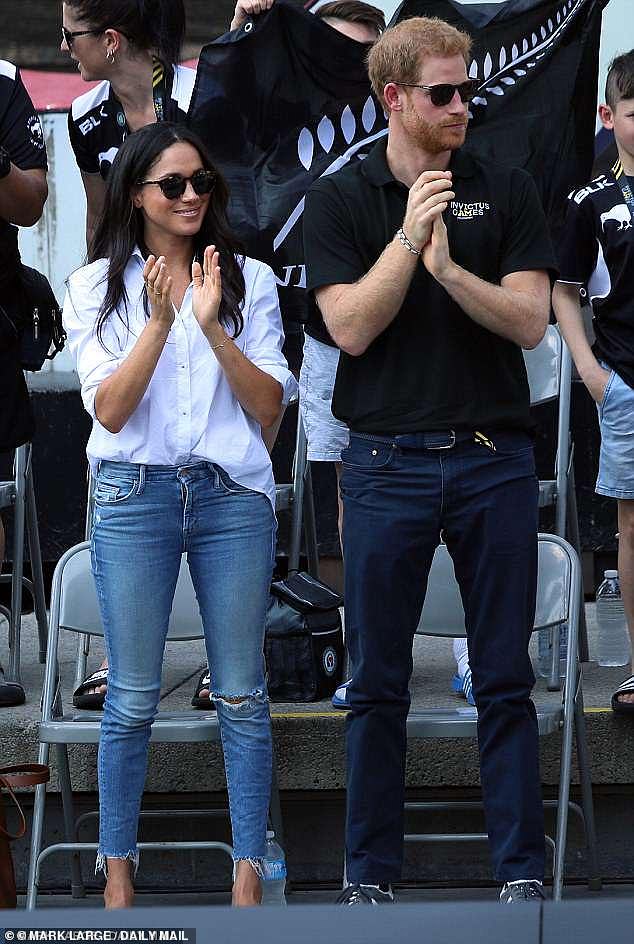 Meghan the shirt at the Invictus Games in Toronto in September last year, just two months before her and Harry’s engagement was announced

Misha, who was previously married to Prince Harry’s friend Alexander Gilkes, attended the royal wedding in May, showing off designs from her own label.

Sharing photographs of herself from the big day on Instagram, she wrote: ‘Memories from the happiest weekend ❤️’

‘I designed this dress using ice blue silk mikado from Taroni, one of the oldest silk mills in Lake Como, Italy.’

Posting a picture of herself in her evening outfit, she added: ‘For black tie, I love wearing a jumpsuit and created this one shoulder, draped silk style in our signature red.

WHO IS MISHA NONOO?

Born in Bahrain, her father is an Iraqi businessman, her mother is English.

The family moved to the UK when she was 11 and she attended the ACS International school in Cobham (where full boarding and tuition fees are now a stonking £45,560 a year).

A few seasons later, she had been dubbed ‘one to watch’ in New York, with Gossip Girl star Blake Lively wearing her clothes in Vogue magazine, and actress Kirsten Dunst being an early fan.

Influential stylist Olivia Palermo has championed her, and happily Palermo is also a pal of Meghan’s.

Nonoo’s stellar social profile in New York did her professional success no harm, and this was partly founded on her marriage to Old Etonian Alexander Gilkes.

He rose from beginnings at the luxury concierge service Quintessentially to work for the LVMH luxury goods group, before moving into art and auctions.

Misha’s 2012 wedding to Gilkes, the son of a wealthy dermatologist, was a three-day bash in a 16th-century castle in Venice, with a live performance by singer Lana Del Rey.

Not only that, Meghan’s ‘sister’ Misha also went to the wedding of Prince William and Kate Middleton the year before. So it’s not as though Meghan was entirely a stranger to the young royal set.

And in the summer of 2012, Gilkes hosted Pippa Middleton at the couple’s Manhattan townhouse when she was on a trip to the city.

All of the Middletons are pals with Gilkes — his nightclub entrepreneur brother Charlie once dated Pippa. Also, in 2013, Gilkes employed Princess Eugenie at his New York-based art auction house, Paddle8.

Eugenie and Misha became chums, and the Princess is a regular at her Fashion Week parties.