Prince Harry and Meghan will today party with the stars as their matchmaker and friend Misha Nonoo marries her oil tycoon boyfriend on the terrace of a 17th century Roman villa at sunset this evening.

The Duke and Duchess of Sussex are in the Italian capital without baby Archie to attend the lavish and star-studded three-day wedding of Misha, 31, and Mikey Hess, 33, whose financier family is worth $1.9billion (£1.5bn).

Tonight the couple will walk down the aisle as the sun goes down at Villa Aurelia, a baroque villa and vineyard once owned Pope Paolo III that sits on one of Rome’s seven hills and enjoys extraordinary panoramic views of the Eternal City.

Today truck after truck of supplies lined the winding roads outside the exclusive hilltop mansion, with security brought in by the couple to stop the public seeing in when the couple marry at around 6pm local time.

Around 200 guests wearing black tie or gowns will attend the grand property in the west of Roman property close to the Vatican, which has a giant terrace, ball room and dining room served with Michilen-star quality food from its kitchen.

On the first day of their three-day wedding partry the couple’s friends Orlando Bloom, Katy Perry, Karlie Kloss and Joshua Kushner were spotted at a glittering rehearsal dinner at upmarket Rome restaurant Pierluigi on Thursday night, but Harry, 35, and Markle, 38, stayed away.

The party will continue on Saturday with another expensive event at the celebrated Cinecittà film studios, where it was initially reported the wedding itself would take place.

More than 3,000 movies have been filmed there including 47 Oscar winning ones such as La Dolce Vita. It has been so loved by directors including Felini, Scorcese and Ford Coppola it has earned the nickname ‘Hollywood on the Tiber.’

Misha Nonoo will marry at the expensive and exclusive Villa Aurelia in Rome in front of her closest friends including Harry and Meghan, who have left Archie at home 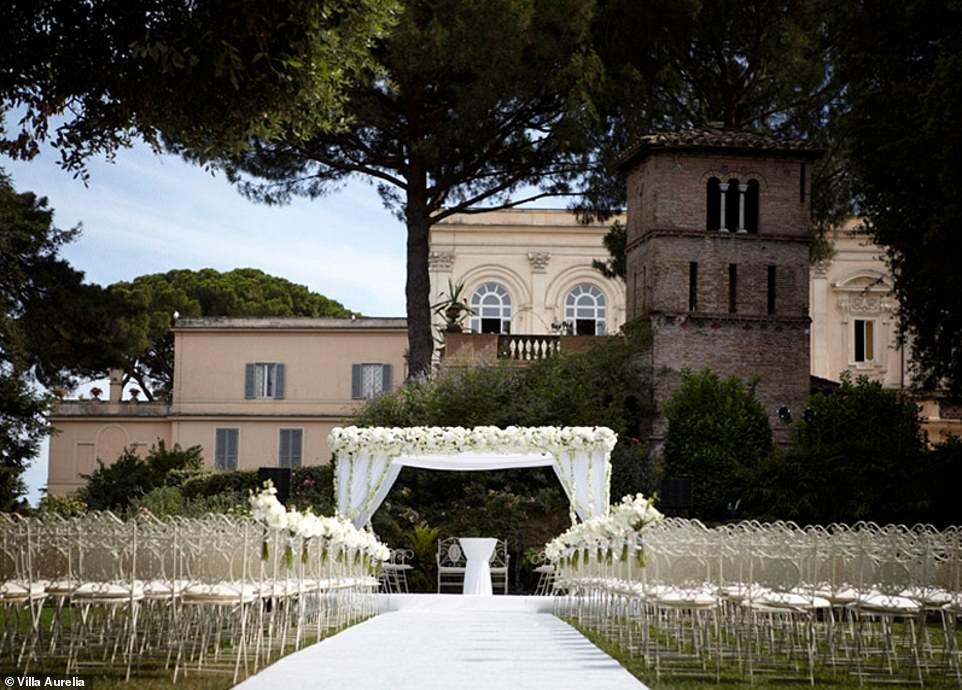 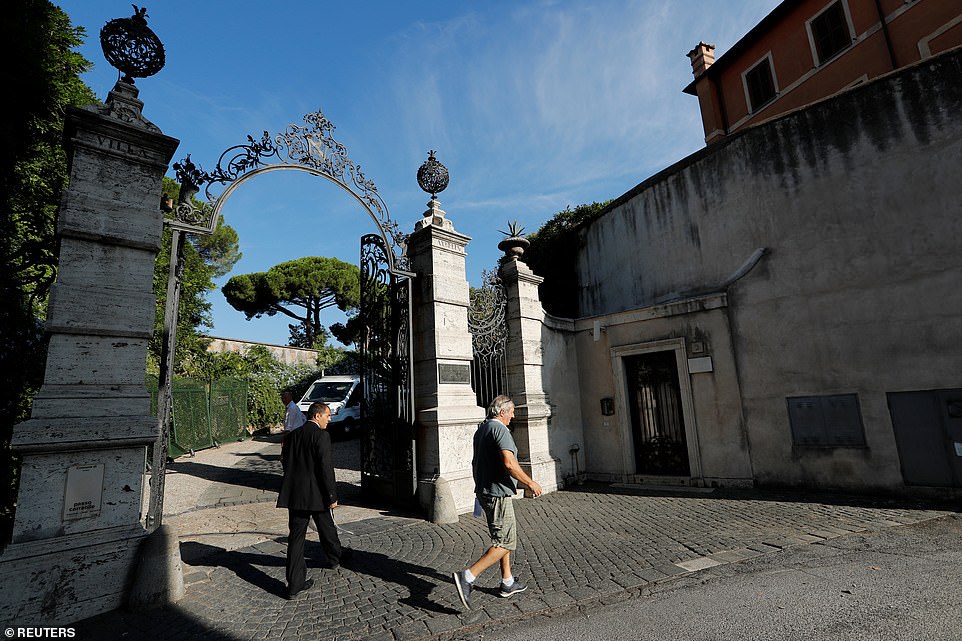 The Duchess of Sussex’s designer friend Misha Nonoo is set to tie the knot at a stunning 17th Century Villa Aurelia in Rome tonight – and preparations are already underway at the wedding venue.  Pictured, the entrance to the villa this morning 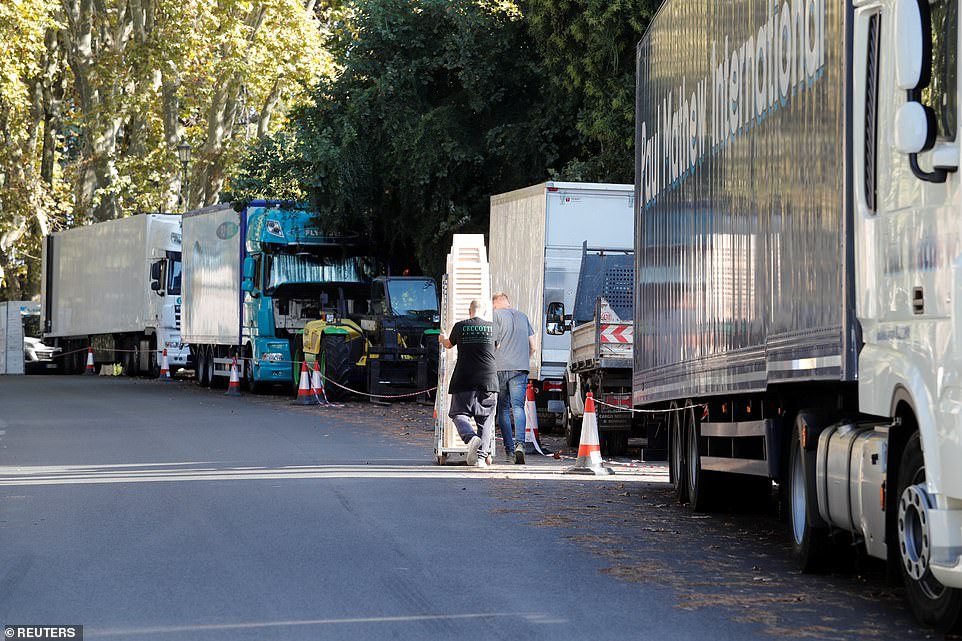 Supplier trucks were this morning seen lining the winding roads outside the exclusive hilltop Villa Aurelia, pictured, where Misha, 31, is set to marry American financier Mikey Hess, son of an oil tycoon, at sunset 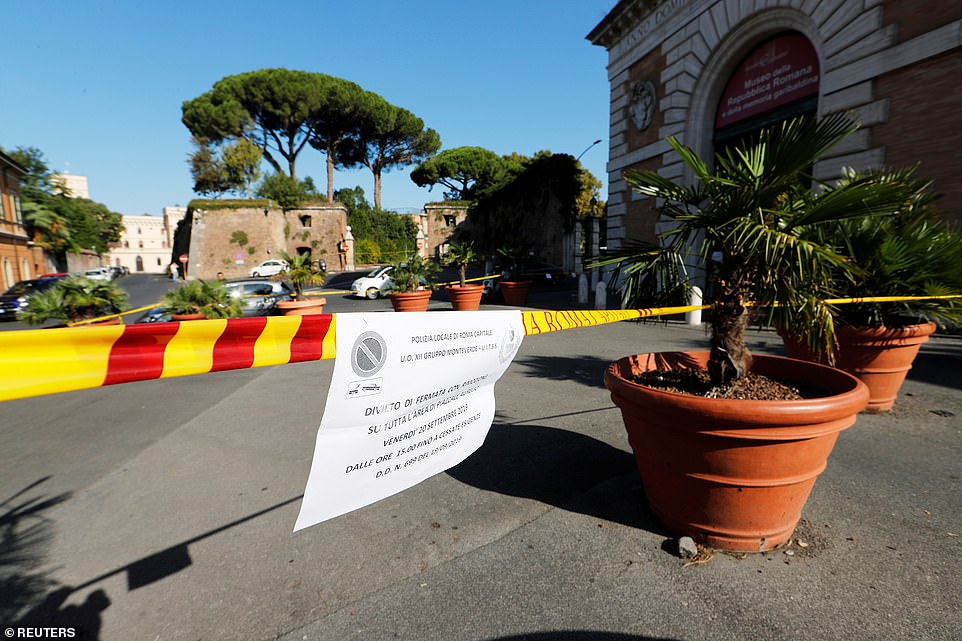 Police tape blocks the entrance to the exclusive hilltop villa where Misha Nonoo’s wedding will take place this evening. The Duke and Duchess of Sussex will be among the guests. It is thought the couple will marry outside at sunset 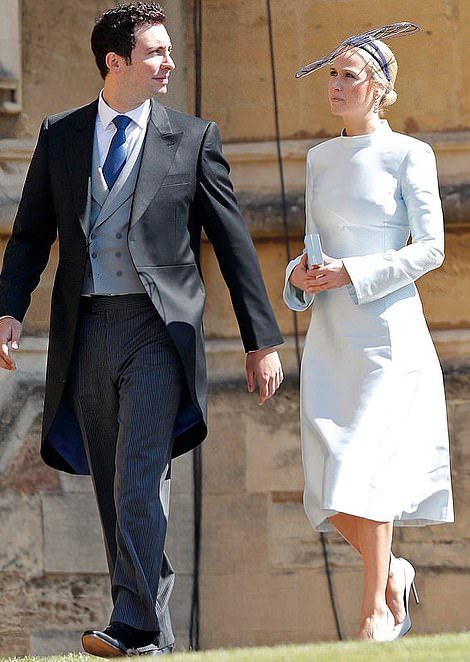 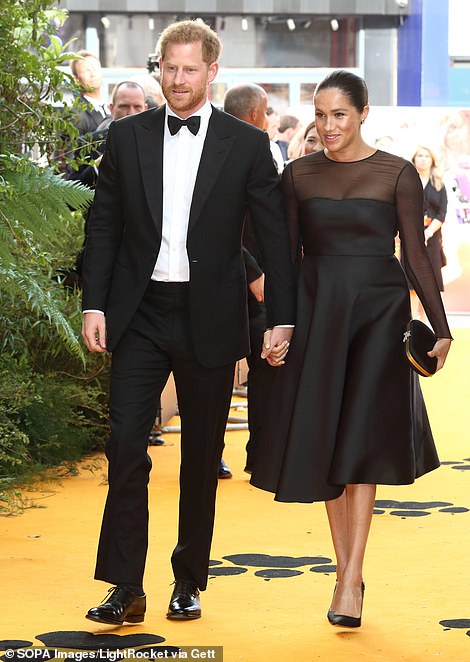 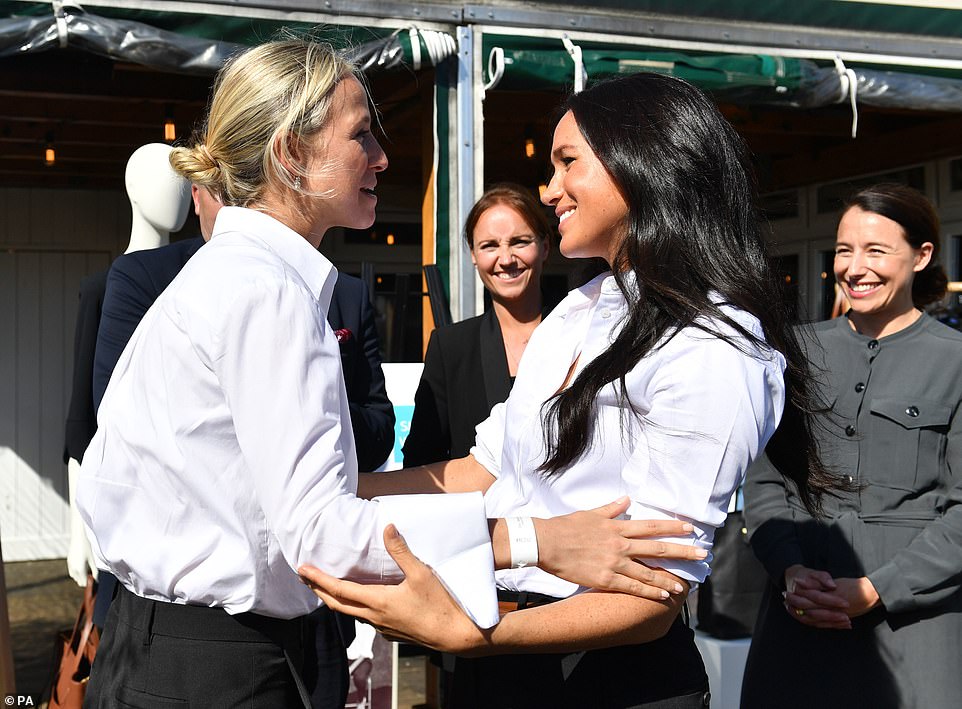 The Duke and Duchess of Sussex are believed to have caught yet another flight as they arrived in Rome today for the wedding of Meghan’s friend Misha Nonoo.

Prince Harry and Meghan are said to have travelled to Italy – on what is their ninth plane journey in just over six weeks – without baby Archie Mountbatten-Windsor.

The pair are thought to be enjoying some downtime at the nuptials at Cinecittà film studios tomorrow before they begin their royal tour to South Africa on Monday.

Harry and Meghan were spotted arriving in Rome today, but Buckingham Palace refused to confirm whether they flew by a commercial or private jet.

However, a source told The Sun: ‘They did fly commercial as Meghan was a bit stung by the criticism over her and Harry’s use of private jets.’

The Pierluigi dinner, Rome’s top fish restaurant, kicked off a weekend of celebrations to mark the wedding of multi-millionaire Mikey and Misha, who is rumoured to have introduced the Duke and Duchess of Sussex.

The Duchess of Sussex recently reunited with longtime friend Nonoo at the launch of her Smart Set charity clothing collection, in which the designer is a partner.

The pair have both spoken publicly about their close relationship so it is of little surprise Meghan has made the trip to Italy for her friend’s big day.

It has been confirmed by sources that Meghan and Harry have flown in for the occasion but forgo a private jet following the furore surrounding their extensive travel this summer.

A source told The Sun: ‘They did fly commercial as Meghan was a bit stung by the criticism over her and Harry’s use of private jets.’

Royal correspondent Emily Andrews tweeted yesterday that the Sussexes are enjoying some downtime ahead of their busy 10-day royal tour of Africa, which starts on Monday.

MailOnline contacted Buckingham Palace, with a spokesperson saying that they wouldn’t provide ‘comment on Their Royal Highnesses’s private schedule’.

The weekend kicked off last night with a relaxed dinner, with guests sitting outside and visible from the street. 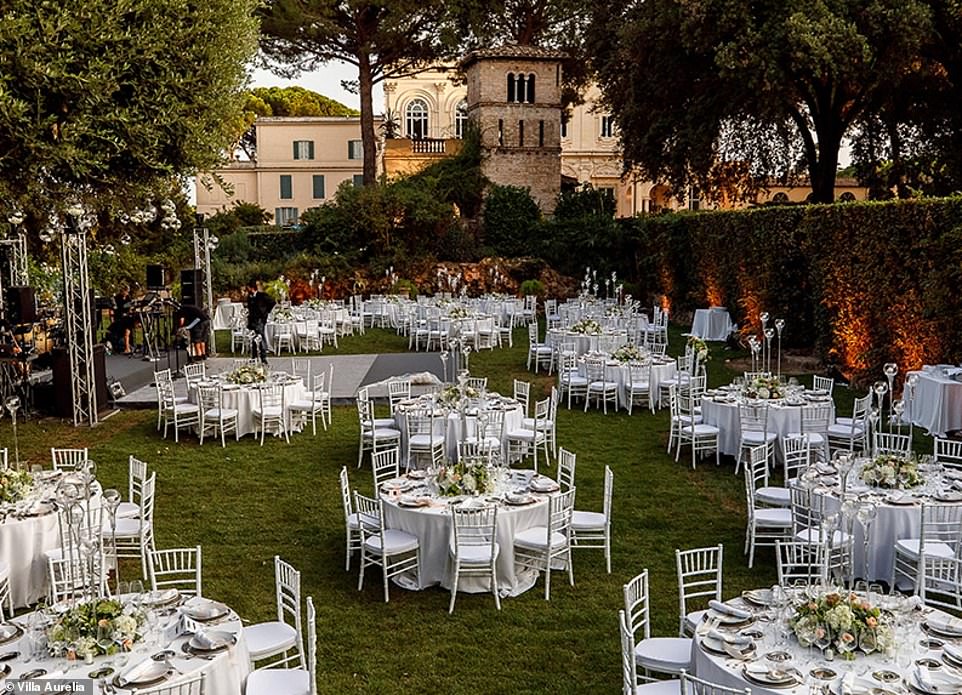 Photos on the villa’s website show how formal meals can also be set up in the garden, as pictured above, or inside 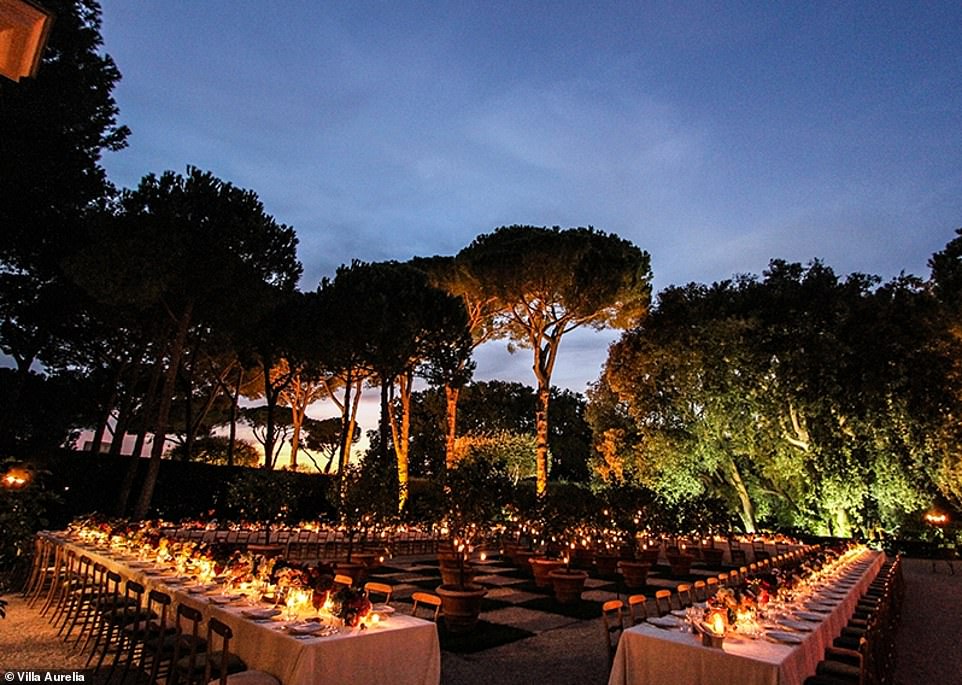 As well as hosting concerts and conferences, the villa is a popular choice for weddings, receptions and private parties (as pictured on social media). It is only hired out on an exclusive basis, meaning guests can enjoy the upmost privacy once on site 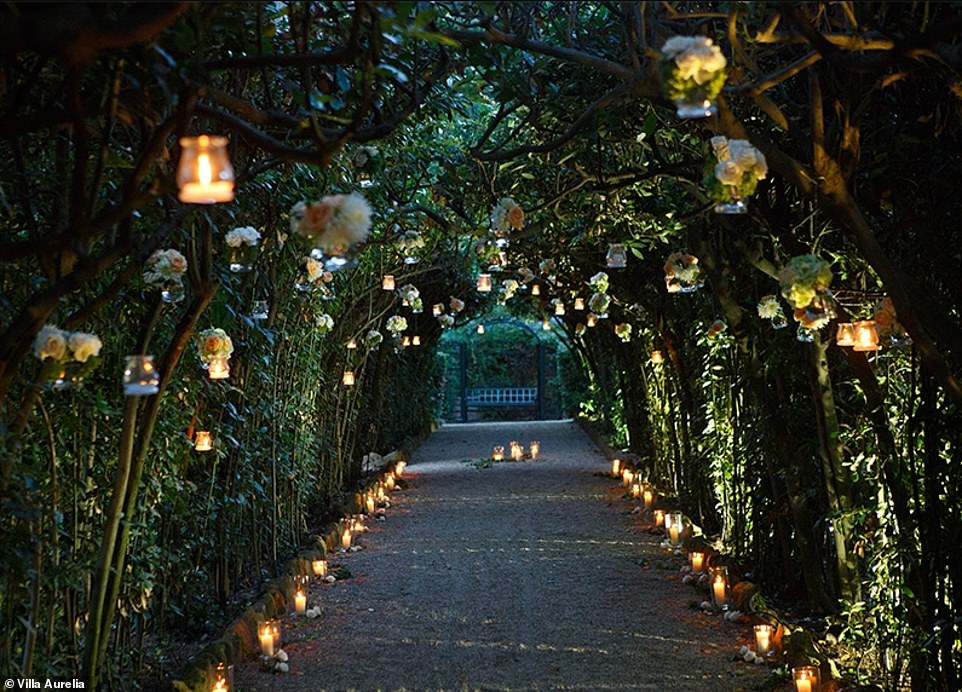 The party will continue on Saturday with another expensive event at the celebrated Cinecittà film studios (pictured), where it was initially reported the wedding itself would take place.

Who is Misha Nonoo, the A-list designer and matchmaker believed to have introduced Meghan to Harry?

Born in Bahrain, her father is an Iraqi businessman, her mother is English.

The family moved to the UK when she was 11 and she attended the ACS International school in Cobham (where full boarding and tuition fees are now a stonking £45,560 a year).

Nonoo’s stellar social profile in New York did her professional success no harm, and her profile was raised when she married Old Etonian Alexander Gilkes.

Misha’s 2012 wedding to Gilkes, the son of a wealthy dermatologist, was a three-day bash in a 16th-century castle in Venice, with a live performance by singer Lana Del Rey.

Not only that, Meghan’s ‘sister’ Misha also went to the wedding of Prince William and Kate Middleton the year before.

Orlando Bloom and Katy Perry, who recently attended Ellie Goulding’s York wedding, were seen holding court as they laughed and chatted with friends.

Another couple who looked delighted to be at the event were Karlie Kloss and Joshua Kushner, who giggled together as they mingled with guests.

Tonight the main event will be held at the Villa Aurelia, which was built in the 17th century and has been owned by the American Academy since the early 1900s.

The villa reopened in 2002 following three years of extensive restoration work and has become one of the most sought-after event venues in the city.

As well as hosting concerts and conferences, the villa is a popular choice for weddings, receptions and private parties. It is only hired out on an exclusive basis, meaning guests can enjoy the upmost privacy once on site.

The villa boasts gilded halls hung with chandeliers, but it is thought, given the timing of the ceremony, that Misha and Mikey will take advantage of the setting sunlight and marry in the formal gardens.

Photos on the villa’s website show how formal meals can also be set up in the garden, or inside.

This will be the first marriage for Hess and the second for Nonoo, who was previously wed to Paddle8 founder Alexander Gilkes.

Designer Misha, who grew up in Bahrain, is believed to have set up the former actress on her first date with the Duke of Sussex in 2016, although this has never been confirmed.

She was one of the attendees at the Royal Wedding in May, and was a guest at the Duchess of Sussex’s baby shower in February. 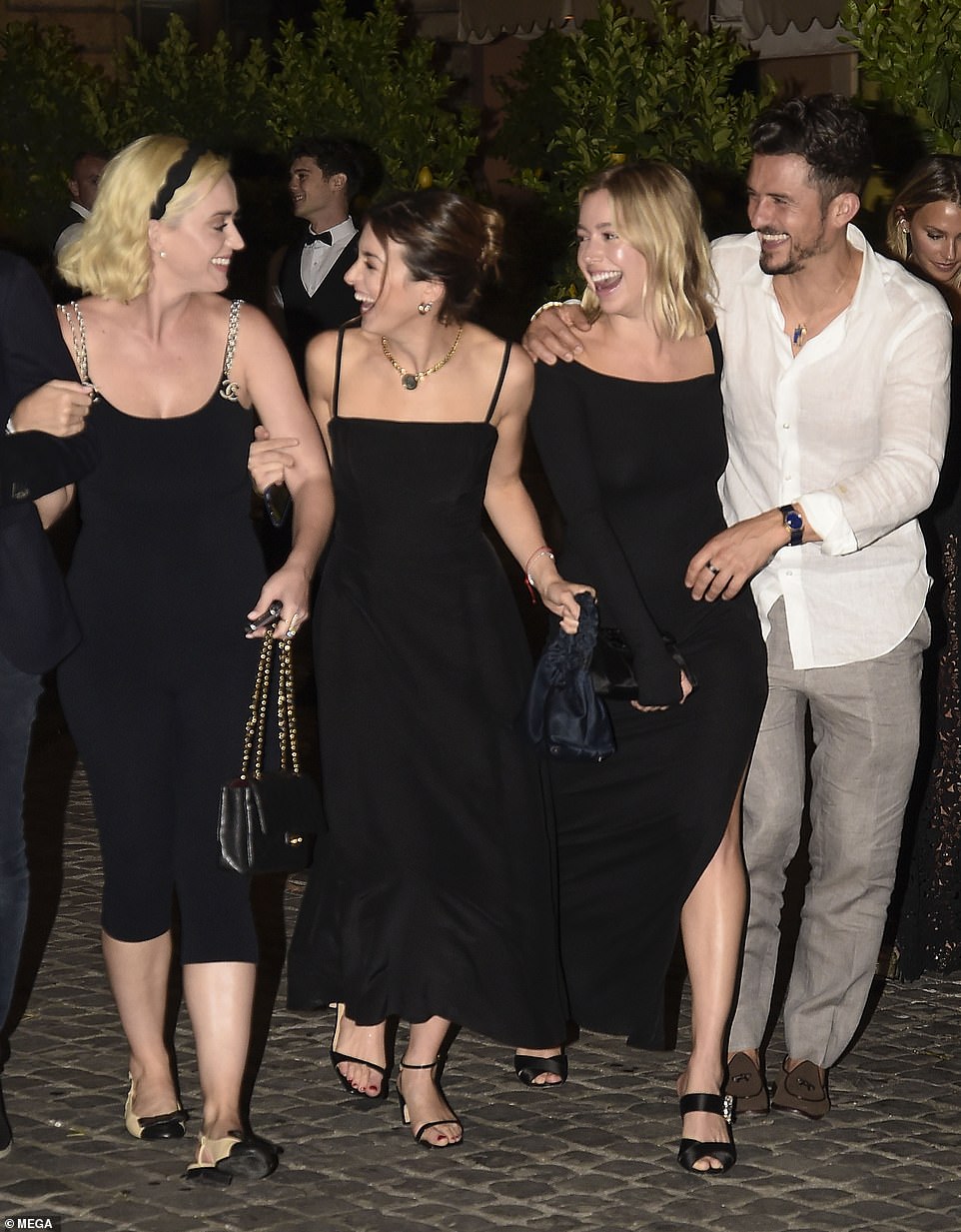 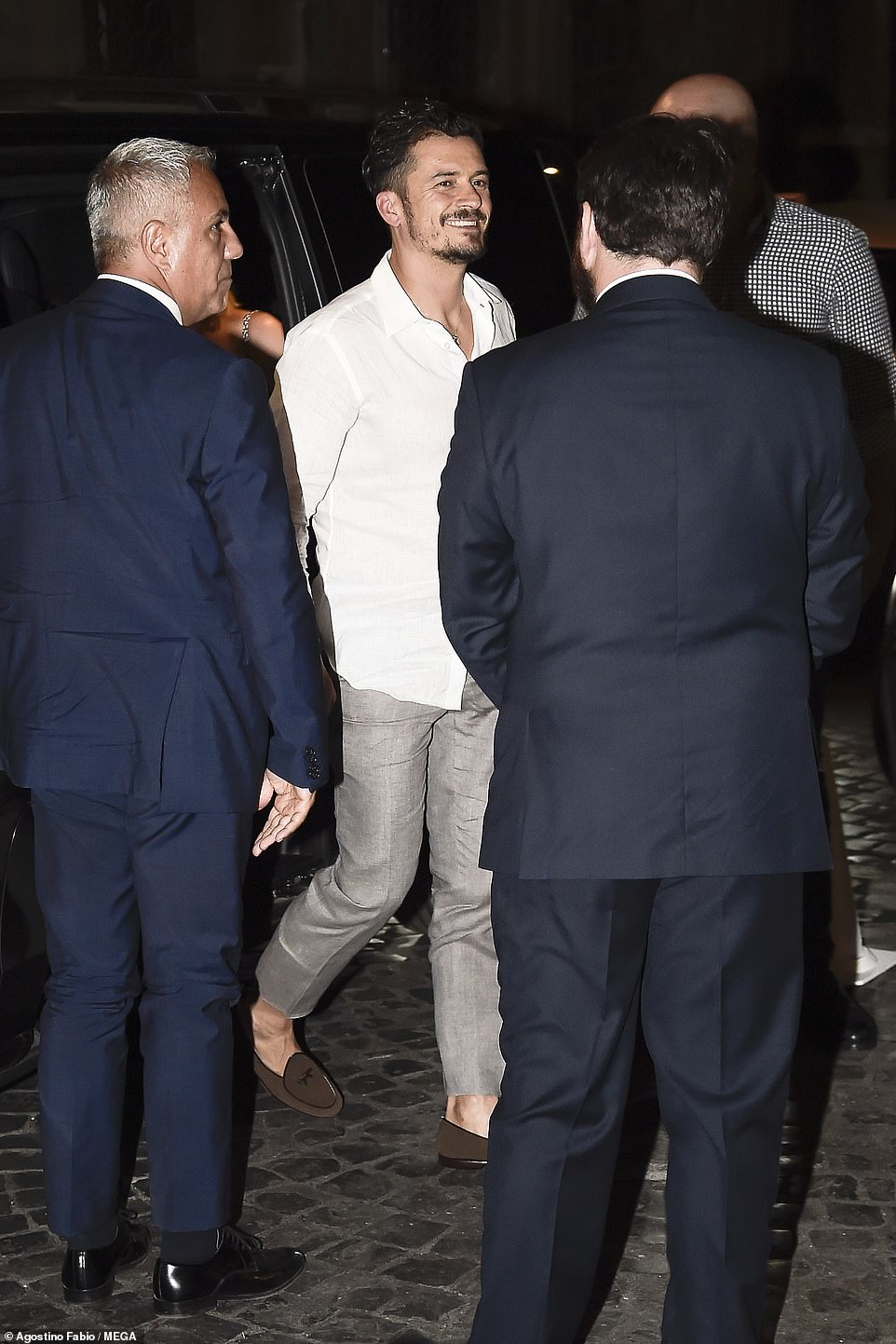 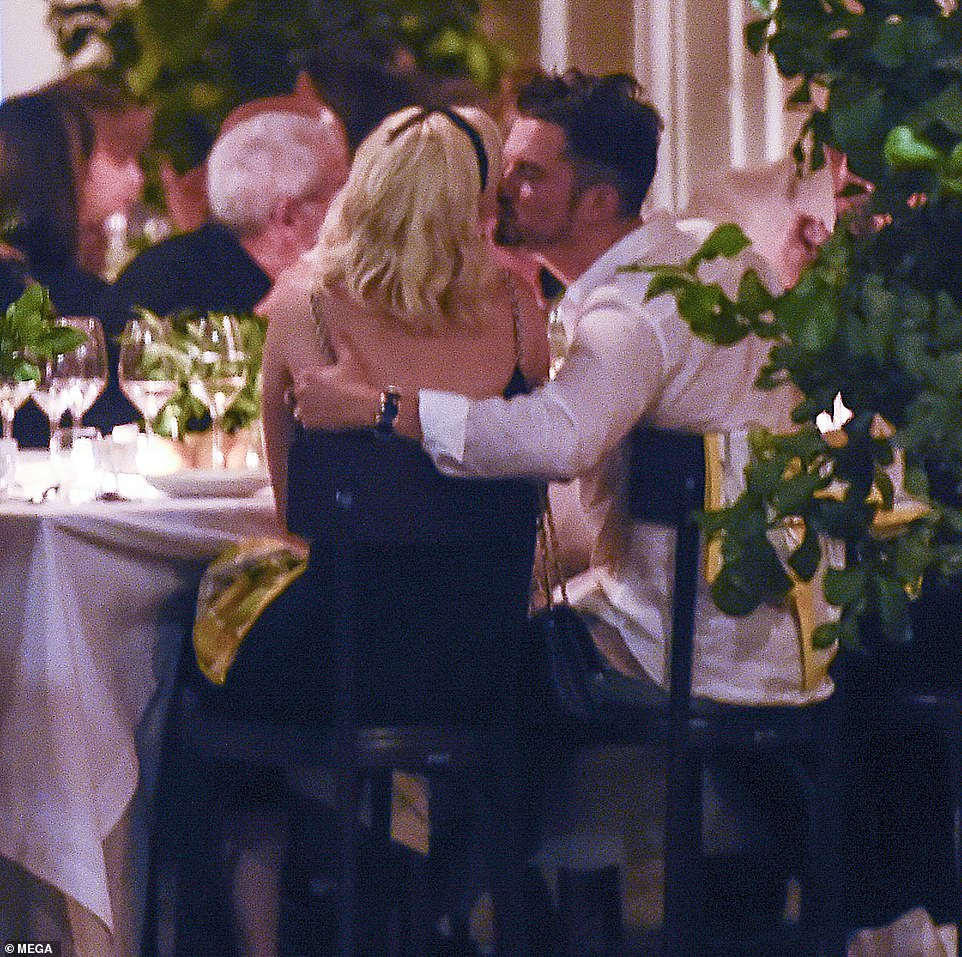 Mikey Hess is from one of America’s wealthiest families, with grandfather Leon the founder of the multi-billion-dollar Hess Corporation.

His father John is now the CEO of the company while Mikey has racked up an impressive C.V of his own, having worked at Goldman Sachs and the Royal Hashemite Court after graduating from Harvard and Harvard Business School. It was Harvard that he met best friend Josh Kushner.

He has also been friends with model Heidi Klum for several years and, in 2016, was spotted in animated conversation with Princess Beatrice.

Along with his bride-to-be Misha, Mikey attended Harry and Meghan’s wedding last year.

Nonoo is the daughter of an Iraqi businessman and English mother, and at the age of 11 moved to London with her family.

She is also Jewish, as is Hess, whose grandfather Leon founded the multi-billion-dollar Hess Corporation.

Hess’ father John is now the CEO of the company.

It dos not seem that Hess will be joining the family business any time soon though, having worked at Goldman Sachs and the Royal Hashemite Court after graduating from Harvard and Harvard Business School, where he met best friend Josh Kushner.

He is currently an associate at KKR & Co.

Nonoo and Hess first made their relationship public at the royal wedding last year, and a few months later joined Kushner and his then-fiance Karlie Kloss for a trip down the Amalfi Coast on David Geffen’s yacht.

The Duke and Duchess of Sussex will arrive in South Africa on Monday for their ten-day tour.

Harry is looking forward to introducing Meghan and baby Archie to South Africa. He will also carry out solo visits to Angola, Malawi and Botswana.

The couple have asked their supporters to back more than 20 organisations, including Sentebale, a charity founded by Harry and Prince Seeiso of Lesotho in 2006.

Baby Archie will be around five months old when his parents take him on his first official overseas trip.

During the visit to Africa, the duke is likely to champion the work of his mother Princess Diana who was photographed walking through a cleared landmine field in Angola to highlight the devastating injuries they can cause.

Buckingham Palace declined to comment on their trip to Italy. 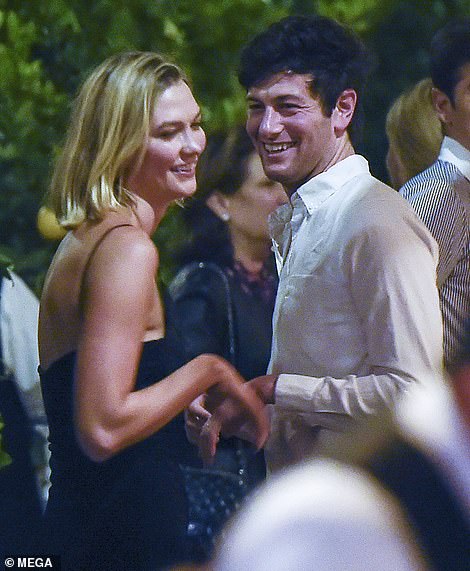 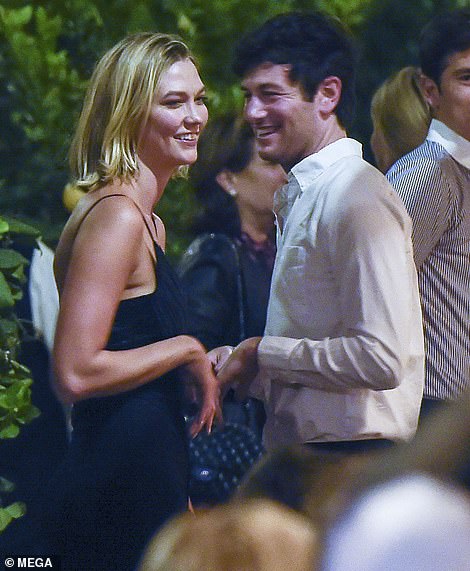 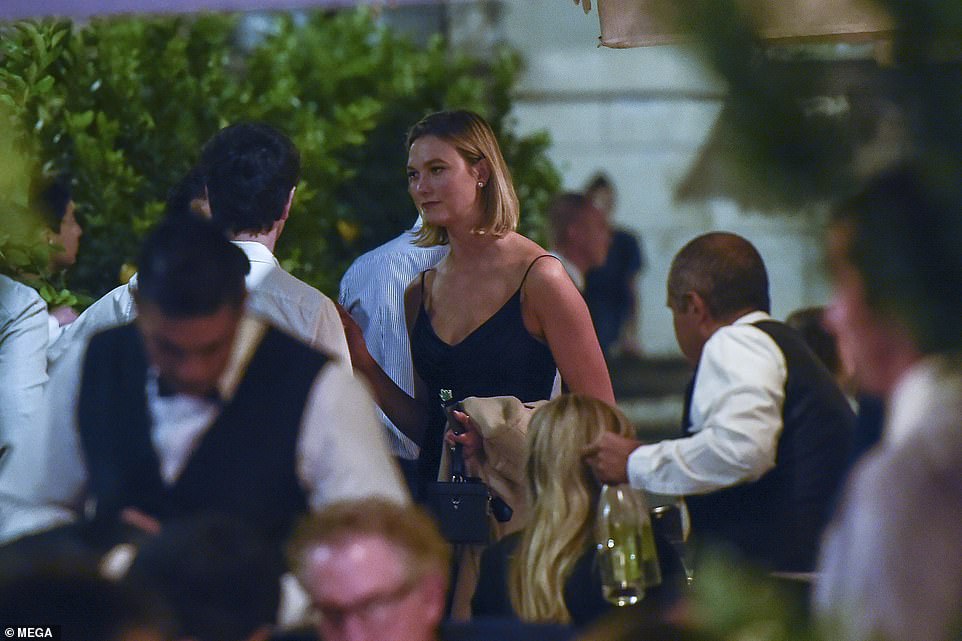 Karlie Kloss, pictured at the party, seemed to enjoy the night but there was clearly one moment when she was less than pleased 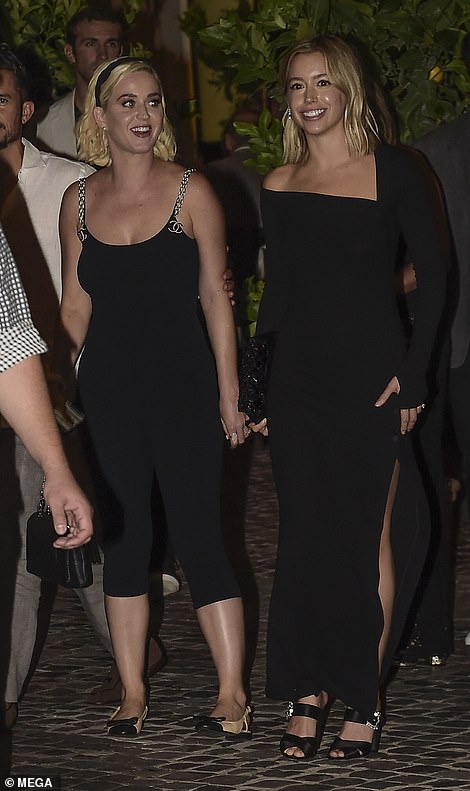 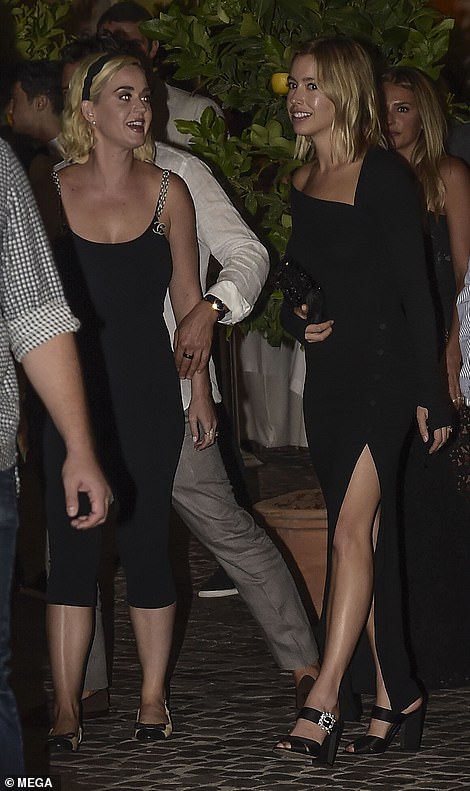 Though Katy Perry and other A-listers were present, there was no obvious sign of Harry and Meghan at the rehearsal dinner in Rome 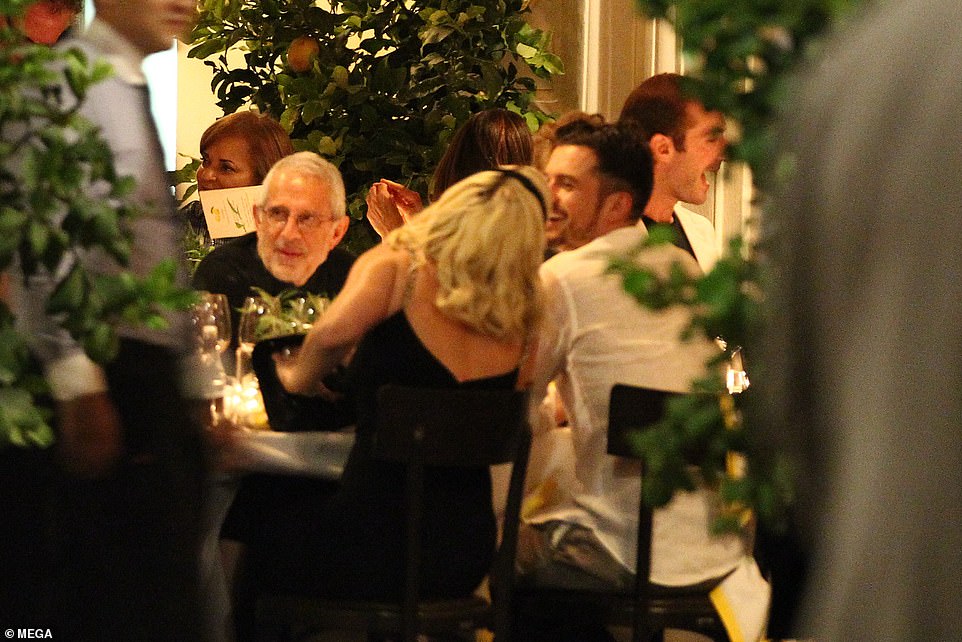 Giddy: The pair couldn’t contain their laughter as they giggled among themselves during the dinner, seemingly unaware of the people around the