The Miss England finalists for this year include mental health campaigner and a Muslim woman who will wear a ‘burkini’ in the swimsuit round.

The inspirational women from all over the UK have been whittled down to just 50 contestants – after qualifying in their own cities or areas of England.

Among there are also a farmer, a woman with a titanium hip and the sister of a famous England football striker.

The finals, in Newcastle this evening, will include a bare-faced round, where all 50 contestants are asked to parade on the catwalk without make-up.

There will also be an ethical fashion shoot to promote recycling from outfits the contestants have created themselves. Other rounds include Miss Beautiful Hair, Miss Charity, and a TV presenters round.

The winner tonight will receive a huge cash prize, a holiday for two in Mauritius and will represent England in the Miss World Finals. Here we meet some of the finalists…

Aysha Khan from Lancashire, will wear a wetsuit during the optional swimwear round, instead of wearing a revealing bikini

The 19-year-old, who won Miss Lincoln, says she ‘wants to use the platform to promote the issues of mental awareness’.

This comes after her own mental health struggles, at 14 she says she dealt with insecurities around her body, and has a history of self-harming.

Becoming insecure about her body because of social media she started over doing it at the gym and also restricted what she ate.

However the now confident finalist, showed off her self harming scars during the swimsuit section of Miss Lincoln UK. 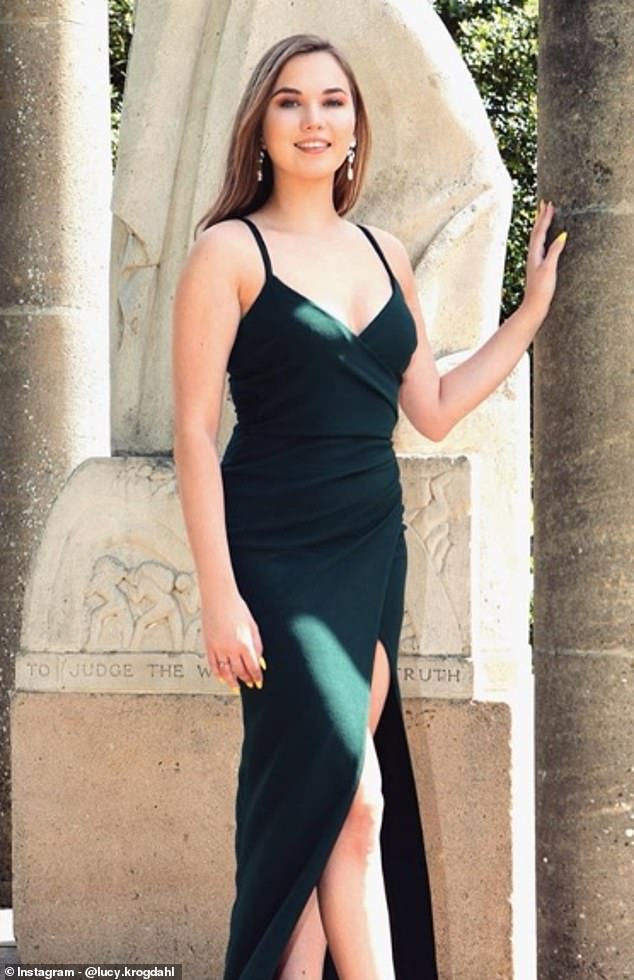 Lucy, from Lincoln, is among one of 50 who will be competing in tonight’s finals to be crowed Miss England 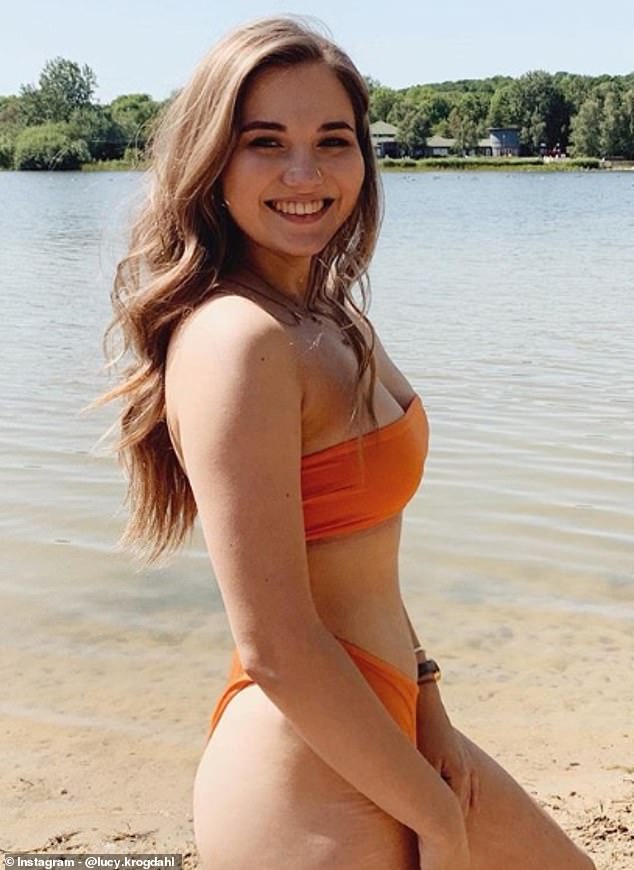 Now a confident finalist, Lucy showed off her self harming scars during the swimsuit section of Miss Lincoln UK

Jodie, 25, was given 72 hours to live a few years ago when her appendix burst and it resulted in a blood infection and ripped bowel.

Thankfully, after surgery she pulled through and earlier this year she was crowned Miss Birmingham.

She said: ‘Over my time in hospital I had various student doctors try to help save my life along with specialists.

She was crowned Miss Birmingham after the eco-friendly round of the competition where she wore her mother’s suit from 30 years ago – trimmed with reusable Asda bags. 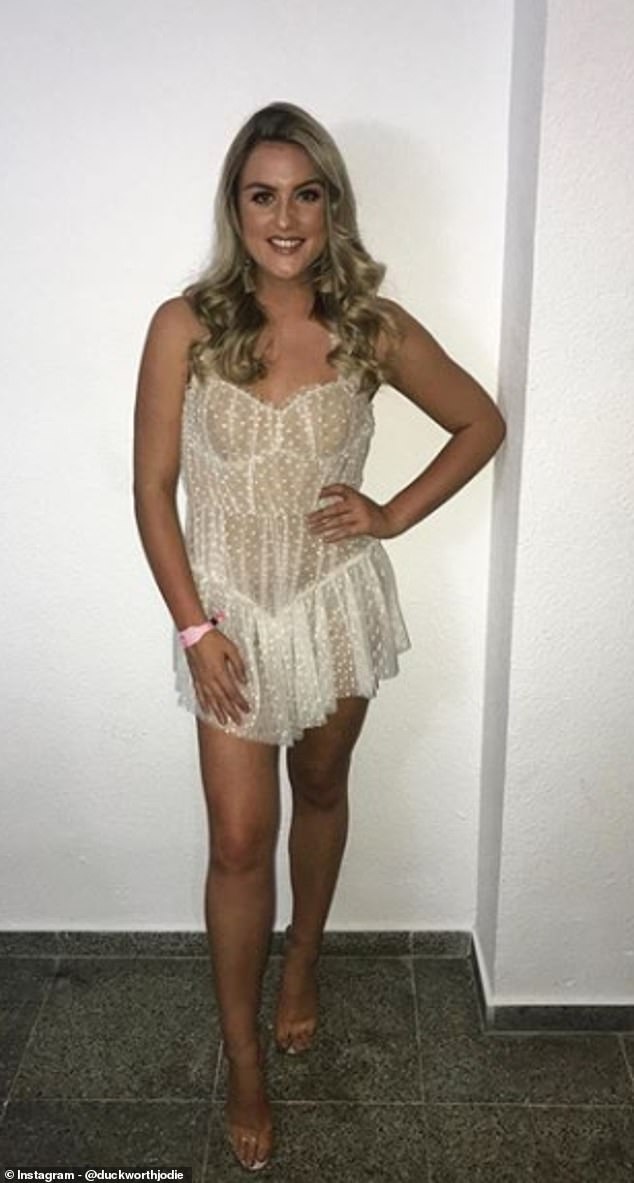 Jodie, from Birmingham, went through life threatening surgery and says that, now, more than ever she appreciates the human body 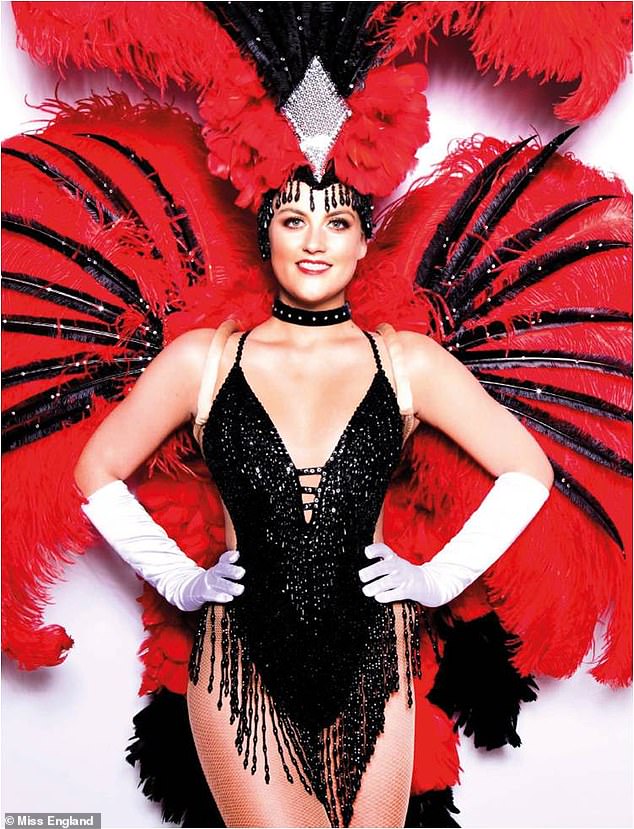 Jodie, dressed in a cabaret outfit, was crowned Miss Birmingham after the eco-friendly round of the competition

The 24-year-old wildcard winner is an Ambassador for Princess Diana’s Charity for Bullying and she has spoken in the House of Commons.

She said: ‘I am an Ambassador for Princess Diana’s Charity for Bullying, and have spoken in the House of Commons – now I want to address a Miss England audience’.

Domenique, originally from Lincolnshire, said she wants to raise awareness of peoples mental health struggles, after she lost a close friend who was being bullied and was suffering from anxiety and depression. 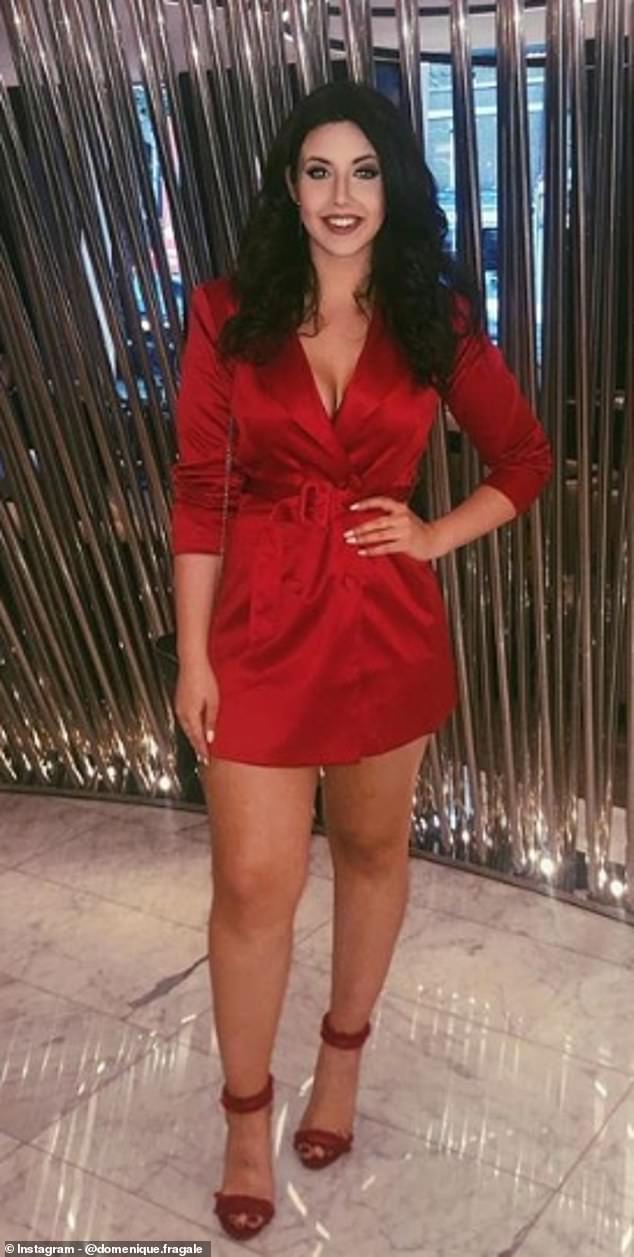 Domenique, originally from Spalding, says she wants to address  bullying and mental health struggles while in the running for Miss England 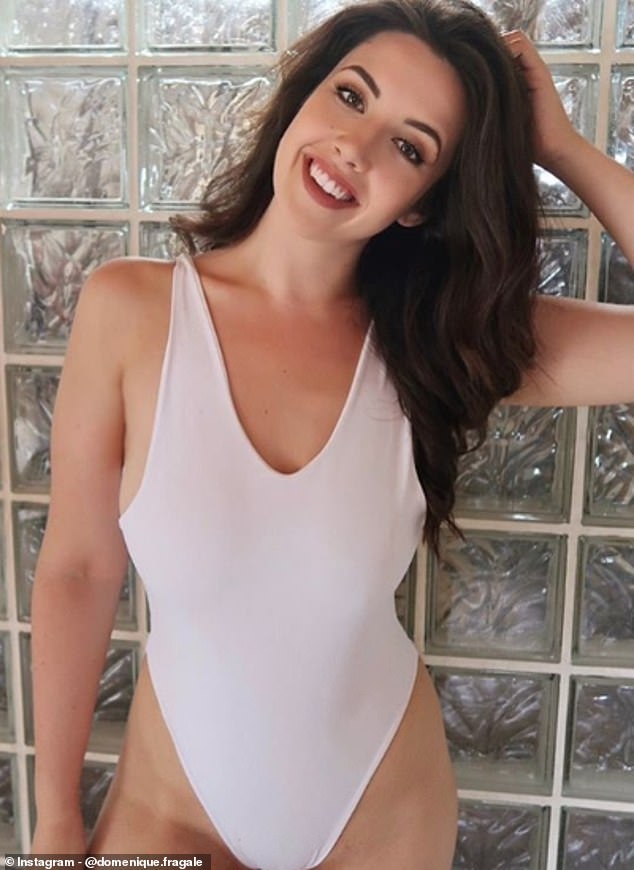 Currently Miss Lancashire, Aysha, has embraced her Muslim traditions by entering herself into the optional swimsuit round in a burkini.

The 21-year-old, from Blackburn, Lancashire, was the only one out of 50 regional entrants to opt for the full-body covering instead of a more revealing bikini or swimming costume.

‘I want to embrace the Muslim traditions of covering skin, which is why I designed my “burkini” to wear in the Beach Beauty Final,’ she said.

The student said her Muslim faith made her wary of posing in revealing ensembles, and that without them she felt just as sexy as the other girls. 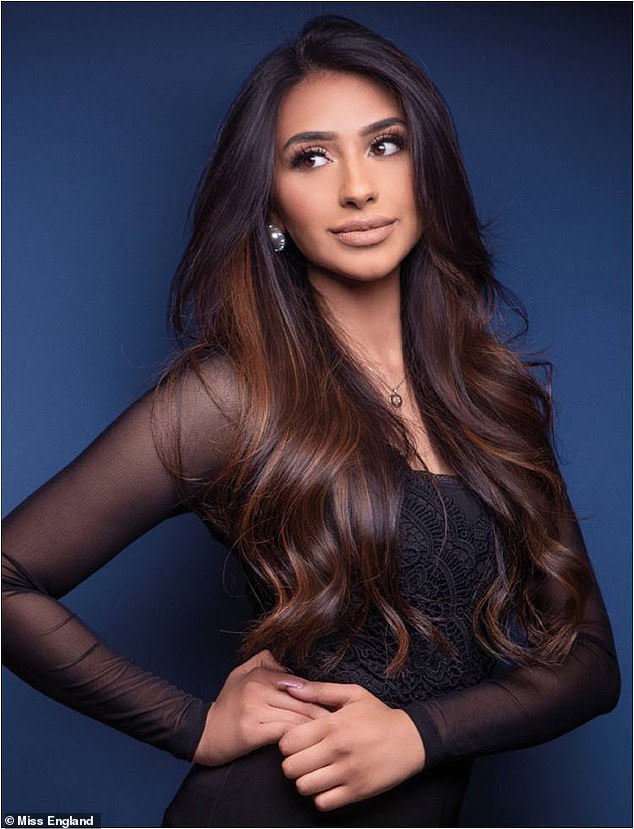 Aysha, from Lancashire, has embraced her Muslim traditions by deciding to wear a burkini in this years contest for the optional swimsuit round

Miss Liverpool has a claim to fame as she is the daughter of former Everton footballer David Unsworth.

The 20-year-old now now helps out as a volunteer with Everton in the community, while her father manages the club’s Under 23 side.

Finley helps with the charity’s Youth Zone scheme, which combines sport sessions with workshops on topics such as health lifestyles and employability.

While doing the contest she is raising money for charity Beauty With A Purpose – which helps disadvantaged children locally and nationally. 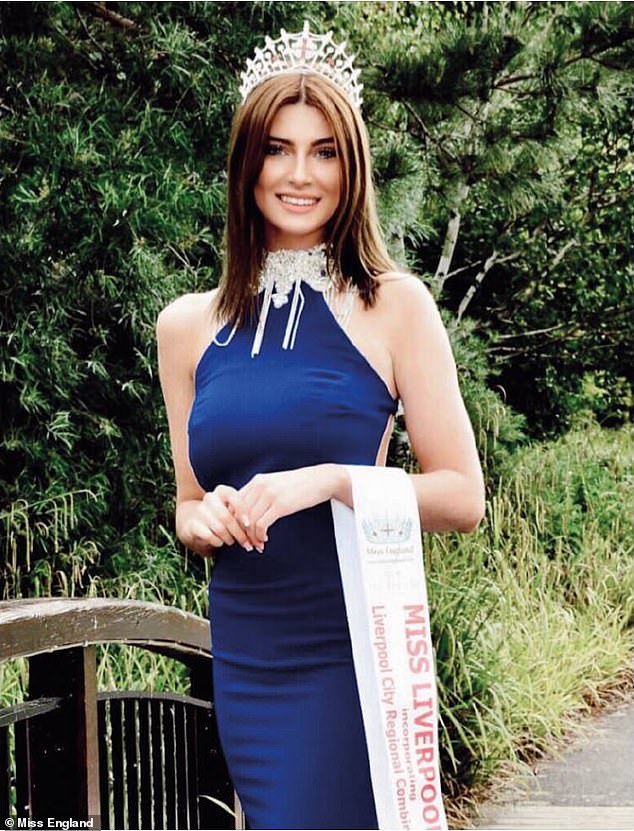 Finley, 20, from Liverpool, is the daughter of ex Everton footballer David Unsworth – who now manages the Everton ladies team

The 25-year-old who volunteers on Kecksys farm in Harlow, Essex, helps to rear pigs.

However, she’s hasn’t had the traditional route into pageant life – as she is a former heroin addict who appeared on Jeremy Kyle Show in August 2017.

She started drinking aged nine and spent years squatting and begging for money after developing a drug habit as a teenager.

Last year her mother helped her daughter through an at-home recovery programme before entering her into the Miss England pageant on a whim.

She said: ‘But volunteering on the farm takes my mind off everything because the animals are so loving and affectionate.’ 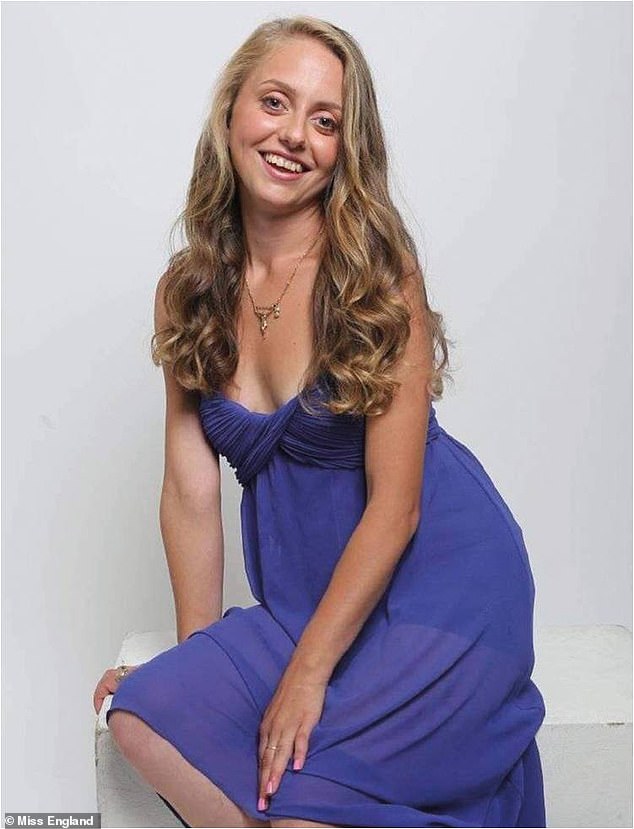 Atlanta, 25, is a farmer from Essex,  but also an ex heroin addict who appeared on Jeremy Kyle Show in August 2017

Two years ago Eleanor Farr, from Cheshire, was struggling to walk after being struck by agonising arthritis as a student.

Blood tests led the now 24-year-old to being diagnosed with rheumatoid arthritis – a chronic disease that causes the immune system, which usually fights infection, to attack the cells that line the joints by mistake, making them swollen, stiff and painful.

But after three years of battling her condition there was a further shock – the cartilage in her left hips had been destroyed and the only option was replacement surgery – she was given a titanium hip in January 2017.

She was fast-tracked to the Miss England North semi-finals because of her inspirational story, not least because of her raising more than £1,000 for suicide prevention charity Papyrus. 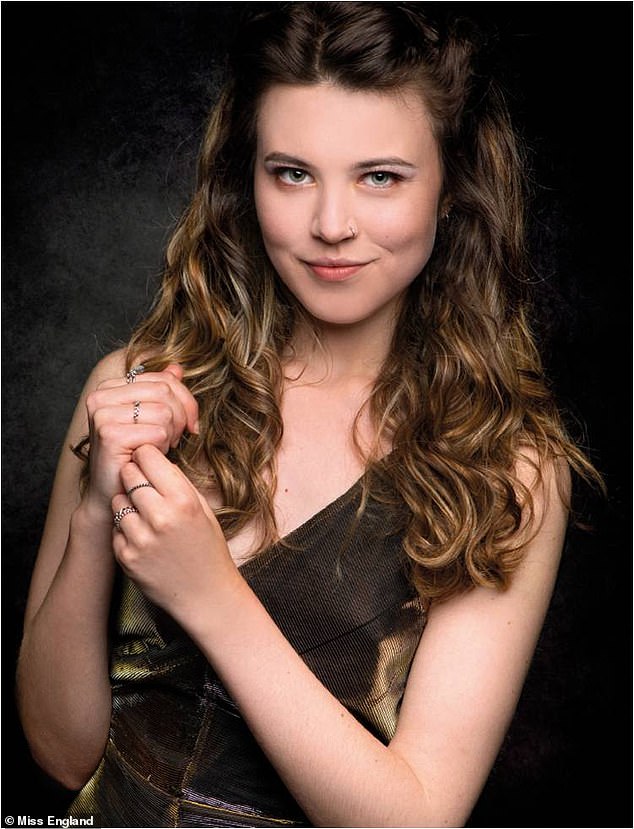 Eleanor, from Cheshire, has a titanium hip after she was diagnosed with rheumatoid arthritis – She was fast-tracked to the Miss England North semi-finals because of her inspirational story

Qualifying from the Miss East Midlands semi final in Leicester Jodie works as a pastry chef at the Ritz in London.

The 19-year-old is told her local newspaper The Rutland and Stamford Mercury: ‘I was emotional and cried a bit when I made it through. They were last to call me so I thought I hadn’t made it.

The talented applicant will be playing the saxaphone as part of her entry, but also said how nervous she was about the competition. 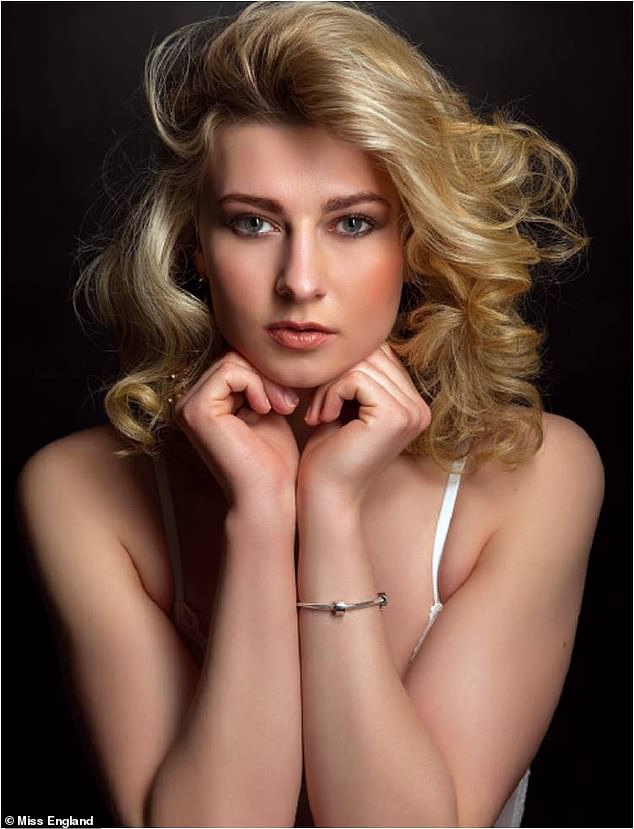 Qualifying from the Miss East Midlands semi final in Leicester Jodie, 19,  works as a pastry chef at the Ritz in London

The 22-year-old is the sister of England and Manchester United striker – Marcus Rashford.

The marketing and communications assistant is the East Midlands Semi Final winner and is looking forward to the experience.

She told the Daily Star:  ‘It has been an amazing experience to be part of, even just meeting the girls from across the country.

‘Every single one of them have so much passion and drive and it is great to meet so many people from different walks of life.

‘I think this competition can be underestimated by so many people who think it is just a typical beauty pageant that is all about looks. 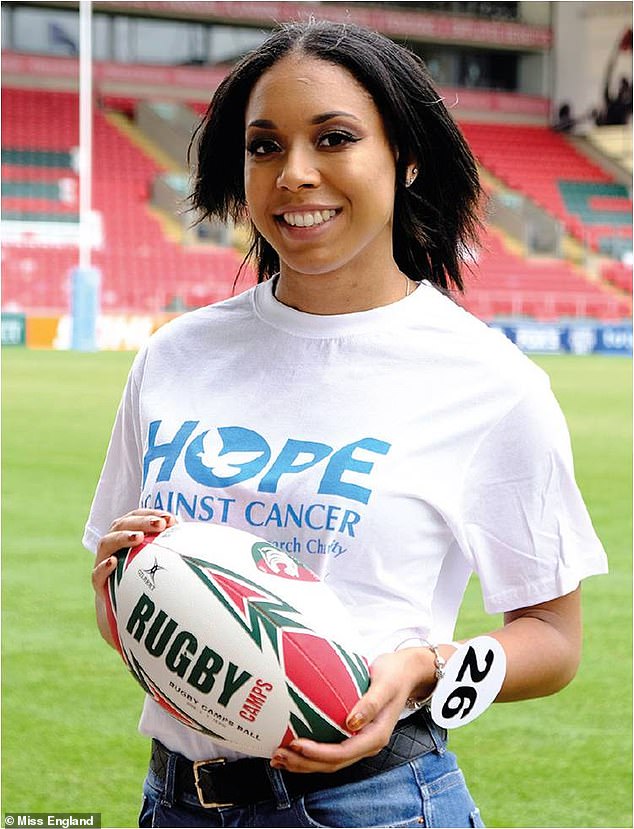