The newly crowned Miss Utah is breaking boundaries by becoming the first openly bisexual contestant to compete for the Miss USA title in the pageant’s nearly 70-year history.

Rachel Slawson, 25, was named Miss Utah USA on Saturday after competing in the pageant five times. While celebrating her victory, she took to Instagram to share a candid message about her struggles with bipolar disorder and ‘coming to terms’ with who she is as a ‘queer woman.’

‘The last time I tried to end my life I was 19 years old, and it was the night I lost Miss Utah USA. “Why wasn’t I enough?” This is my 7th pageant, my 5th time competing at Miss Utah USA, and tonight I finally experienced hands down the biggest dream of my life,’ she wrote.

Breaking boundaries: Rachel Slawson, 25, will be the first openly bisexual contestant to compete for the Miss USA titles in the pageant’s nearly 70-year history 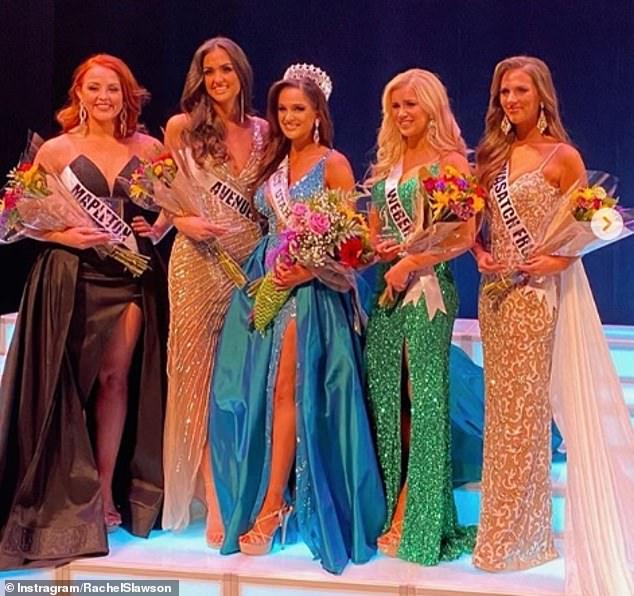 Road to victory: Rachel was crowned Miss Utah USA on Saturday after competing in the pageant five times

Rachel said she was able to accept her bisexuality after being diagnosed with bipolar disorder, noting that was her mental illness was the reason she ‘had such an extreme reaction to losing a pageant.’

‘The only difference between tonight, and the night I left broken-hearted wishing I wasn’t alive, is that I knew I was enough before I arrived,’ she explained. ‘I am so grateful for this crown. And I promise to do right by Utah and spend this year sharing my truth.

‘But if I’m being honest with you, this crown is a new job, not an answer to the question I spent the last 9 years asking. “Why am I even here?” I am why.’

Along with her post, the beauty queen shared a photo of herself wearing her sash and crown while posing on stage with some of her fellow contestants. 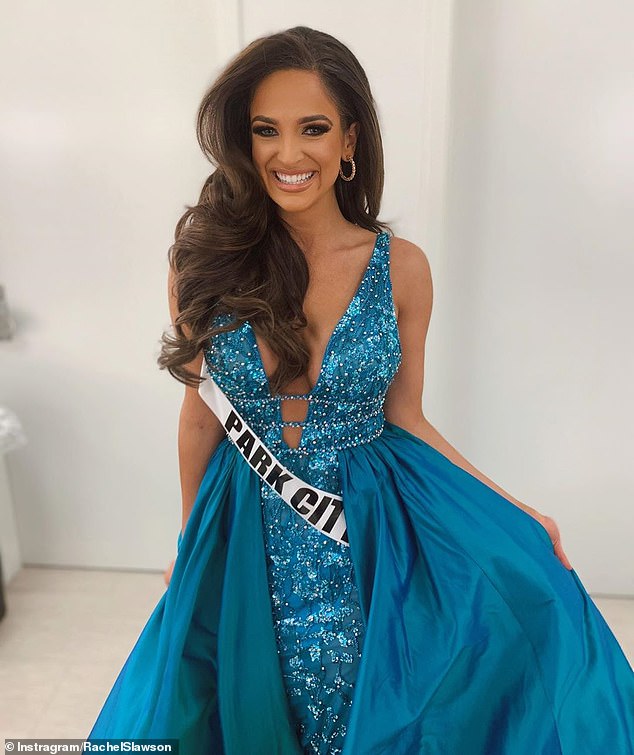 Next up: As the new Miss Utah, Rachel will compete for the title of Miss USA in the spring 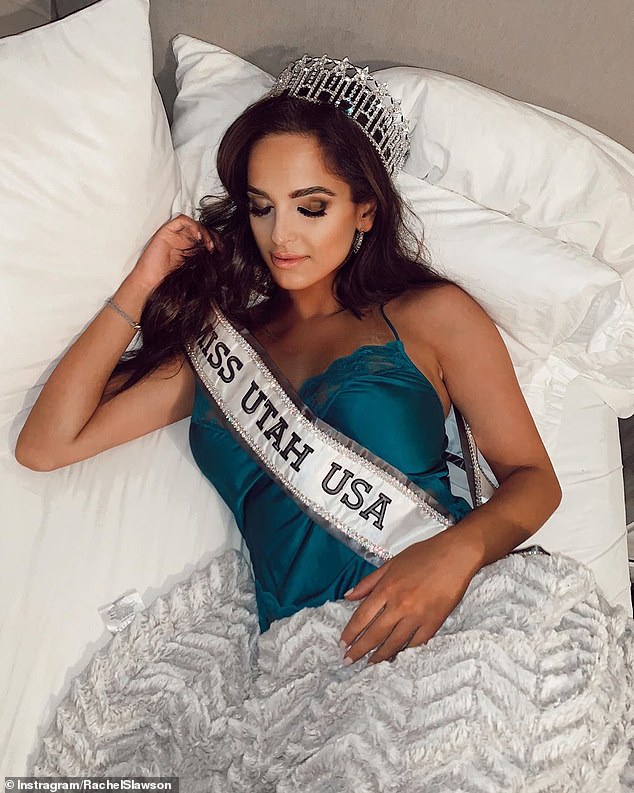 Candid: The contestant celebrated her victory by sharing a message about her struggles with bipolar disorder and her bisexuality

As the new Miss Utah, Rachel will compete for the title of Miss USA in the spring. If she wins, she will continue on to the Miss Universe competition in December.

‘There’s so much stigma surrounding mental health issues and as a bisexual woman in Utah, there’s a lot of shame,’ she told NBC News. ‘But my bipolar disorder and my sexuality are part of what make me beautiful, and I want people who see my competing on the stage, to embrace the imperfect facets of themselves too.’

Rachel’s mental health struggles have made her a suicide prevention advocate, and in her free time, she works as a crisis counselor at the American Foundation for Suicide Prevention and the Crisis Text Line, a nonprofit that provides crisis intervention via SMS message. 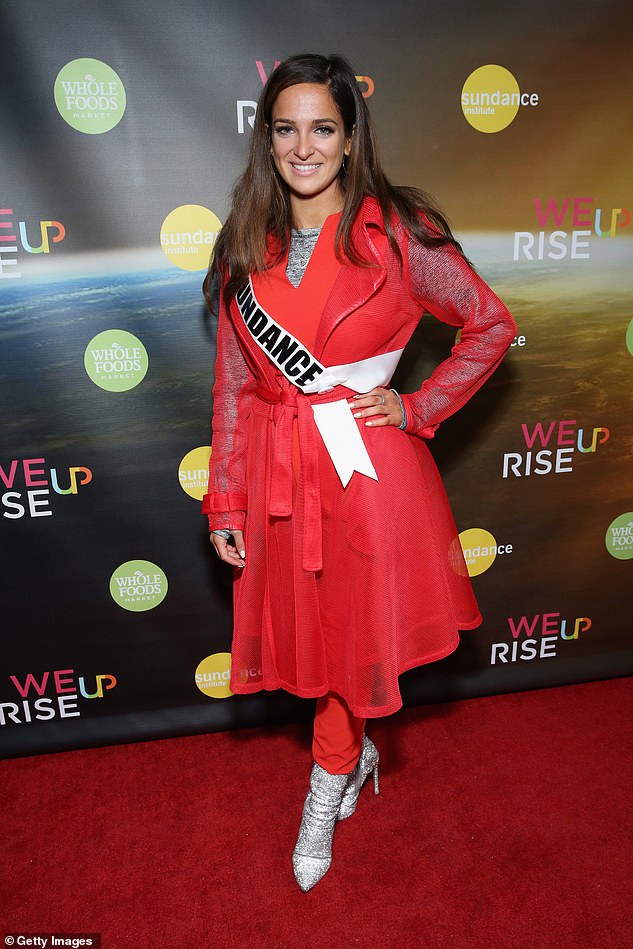 Honest: The suicide prevention advocate revealed on Instagram that she tried to take her life at the age of 19 after losing the Miss Utah pageant 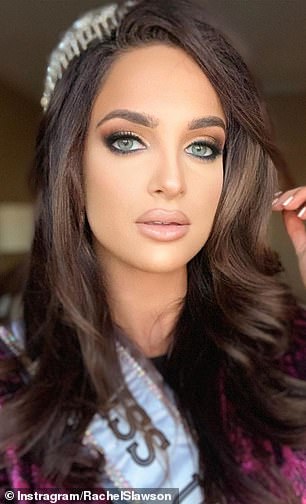 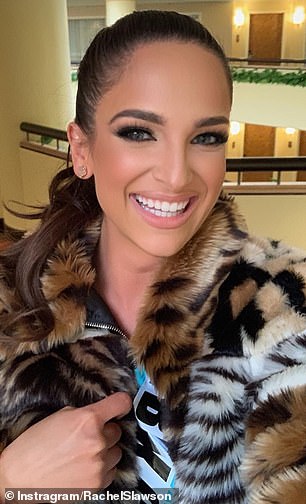 Positive message: Rachel explained being diagnosed with bipolar disorder and ‘finally coming to terms’ with who she is as a ‘queer woman’ has helped her understand her self-worth 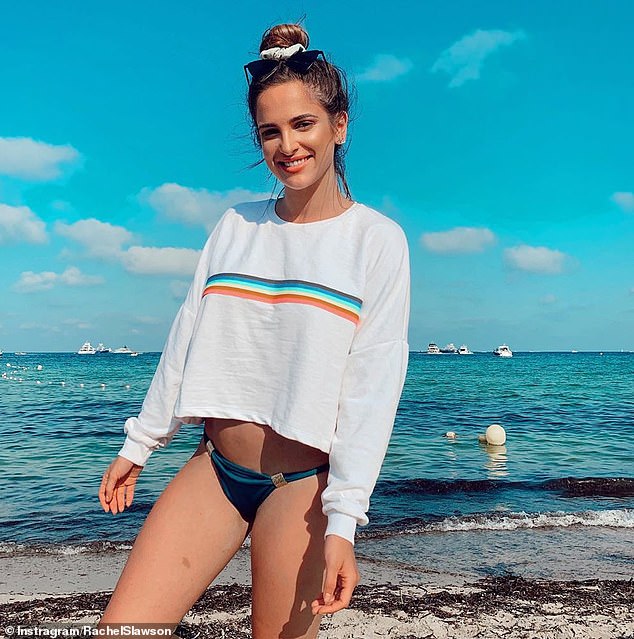 Self-love: The pageant queen said her bipolar disorder and her sexuality are part of what makes her beautiful

‘Rachel’s presence on the Miss USA stage later this year will most definitely send a powerful message to LGBTQ Americans and Utahns, especially those in the bisexual+ community, who feel like they have not seen themselves represented in that space before.’

Before the pageant, Rachel shared a photo of herself laughing while modeling a white jacket with rainbow stripes going down the sleeves.

‘Being Queer is not a “platform,”‘ she wrote. ‘The reason I waited so long to come out as a member of the LGBT+ community was that I didn’t think who I choose to love should define who I am.

‘Life is short. And I have more questions [than] answers, but one thing I’m sure of is that we came here to love,’ she continued. 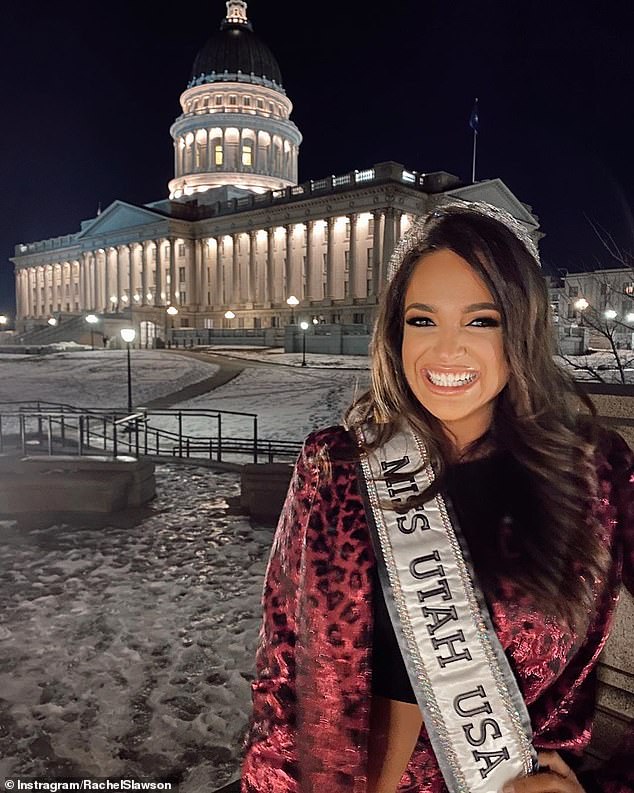 Using her platform: Rachel shared a photo of herself outside of the Utah State Capitol on Thursday to celebrate Utah becoming the 19th state to ban conversion therapy for minors 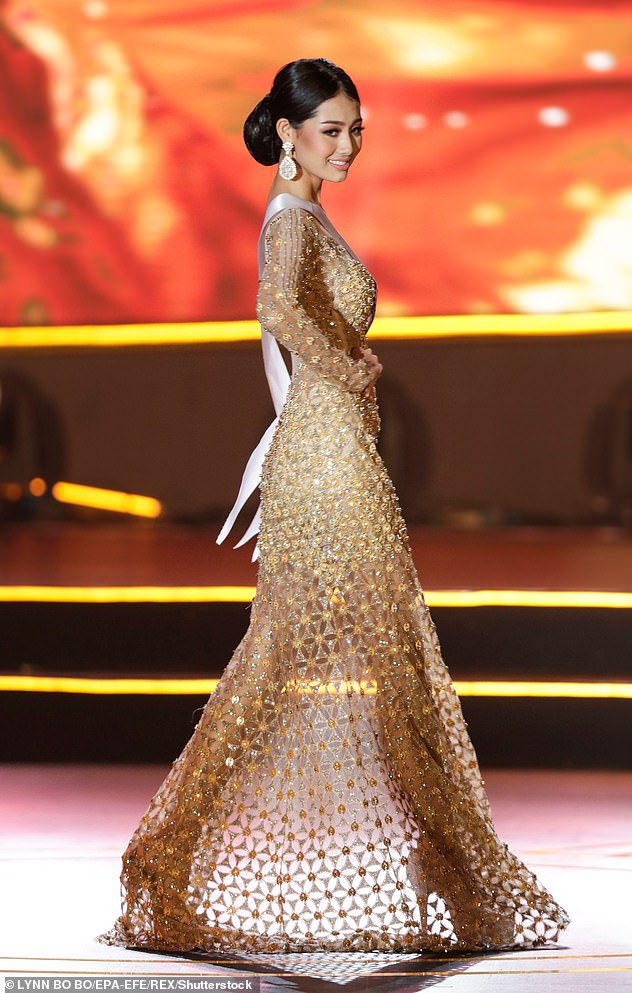 The first! Miss Myanmar Swe Zin Htet was the first ever openly gay contestant to compete in Miss Universe last year  (pictured at the Miss Myanmar pageant in May)

‘And if the people I’ve loved means I am “queer” or “bi” or whatever they call it, then I am proud of that. Because I am never going to walk away from an opportunity to love when it’s rare light shines through in a world that is quick to judge and forget.’

With Rachel’s historic win, she joins a number of other contestants who have increased LGBTQ visibility by being open about their sexuality.

Last year, Swe Zin Htet made history as the first openly lesbian woman to compete for the Miss Universe title, despite homosexuality being illegal in her home country of Myanmar.

In 2016, Erin O’Flaherty became the first openly lesbian contestant to compete in the Miss America pageant.