Health officials yesterday pleaded with patients to use the NHS ‘responsibly’ as it comes under the greatest pressure in its history.

She warned that patients who do not turn up are making things much harder when resources are stretched.

‘With the NHS coming under pressure as never before, we are asking patients and the public to use the health service responsibly to help ensure that care is readily available for everyone who needs it,’ Professor Cummings added.

Pressures on the NHS have escalated rapidly over the festive period with hospitals experiencing significant bed shortages. Doctors have described corridors overflowing with patients and ambulances queuing outside A&E as the winter flu season begins to take hold.

Professor Cummings said with each hospital outpatient appointment costing the NHS approximately £120 in 2016/17, the eight million missed appointments could fund 257,000 hip replacements or 990,000 cataract operations if they were cancelled in time. She added that patients should also seek advice from a pharmacist or the NHS 111 hotline instead of going to hospital, pointing out that 7.5million patients who went to A&E last year did not need treatment.

More than 91,000 NHS employees took off at least a month to deal with stress during a three-year period.

Figures released by 170 trusts across Britain showed a total of 204,573 workers took time off to deal with stress, anxiety or another mental health-related issue between 2014 and 2016. Some 91,364 of those were off for more than a month.

Dr Nick Scriven, president of the Society for Acute Medicine, said many hospitals reported more than 99 per cent capacity in the week before Christmas.

He called for non-urgent operations to be postponed until at least the end of January. ‘Since the [Christmas] bank holiday things have escalated rapidly and we are on the cusp of a major issue at least as bad as last year when it was described by the Red Cross as a humanitarian crisis,’ he added.

‘There is an awful lot of respiratory illness causing a lot of severe symptoms in the old and young and ten to 12-hour delays in emergency departments are … not uncommon.’ 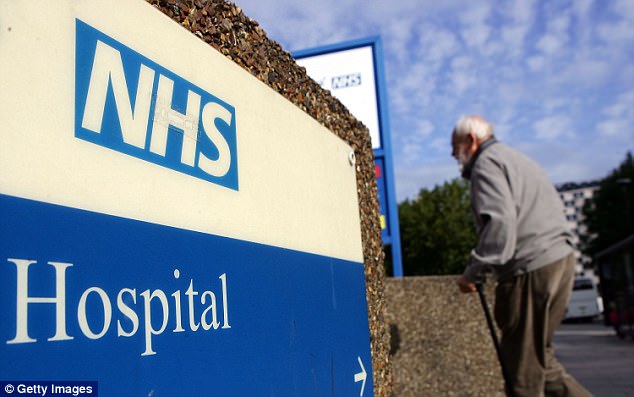 Dr Richard Fawcett, from the Royal Stoke University Hospital, wrote on Saturday that the hospital had run out of corridor space in A&E after ambulances were diverted there from County Hospital in Stafford.

A spokesman for NHS England said hospitals are ‘extremely busy’ but were generally coping.