The body of a veteran auto journalist was found 16 days after he went missing.

Friends and family say that David ‘Davey’ Johnson, 43, was found by Calaveras County Sheriff’s deputies in the Mokelumne River in northern California.

Johnson was last heard from at 8.30am on June 5, when he texted a friend a photo showing him sitting next to a creek near Sonora Pass, accompanied by a message saying he would be heading home shortly.

He was reported missing on June 7 and his belongings – including his motorcycle, clothing, cell phone and computer – were found near the Mokelumne River one day later.

Both family and authorities believe his cause of his death is accidental drowning.

The body of veteran auto journalist David ‘Davey’ Johnson, 43 (pictured), was found in the Mokelumne River in California on Thursday 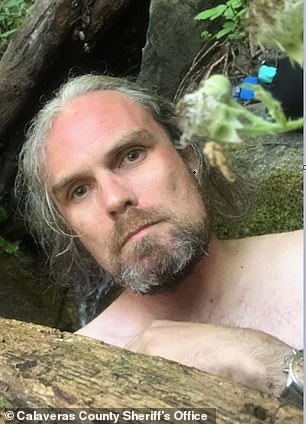 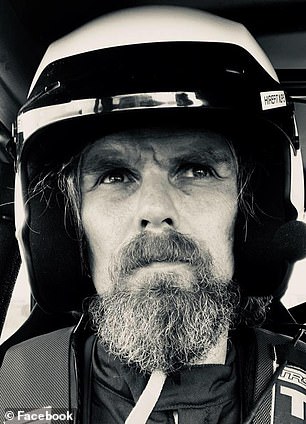 Johnson (left and right) had been traveling through the state on a Honda CB1000R as part of a feature for magazine when he vanished. He was last heard from on June 5, when he texted a friend saying he was heading home

The news of Johnson’s body being found was announced on Twitter by Abigail Bassett, a fellow journalist and unofficial Johnson family spokeswoman.

‘It absolutely breaks my heart to be the bearer of this news. The Calaveras County authorities have let us know that they have recovered Davey’s body. He was found in the river,’ she tweeted early on Friday morning.

The Calaveras County Sheriff’s Department has yet to release an official statement on the discovery.

Johnson’s fiancée, Jaclyn Trop, fears that he decided to take a spontaneous dip in a river he passed on his way home and accidentally drowned.

‘He was probably swept away in the river,’ Trop told ABC News. ‘The detective said the current has never been so fast and so high. He’s not really an experienced swimmer.’

Johnson was traveling through California on a Honda CB1000R as part of a feature for Motorcyclist magazine when he disappeared.

The motorcycle was found a little after midnight on June 8 at a rest stop near Mokelumne Hill with his helmets and gloves stacked atop the bike.

That afternoon, Johnson’s cell phone, clothing and laptop were found near the edge of the Mokelumne River. 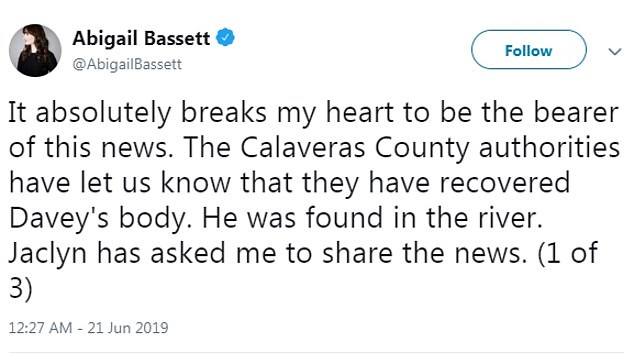 Family, friends and authorities believe Johnson went swimming in the river during a pit stop and accidentally drowned 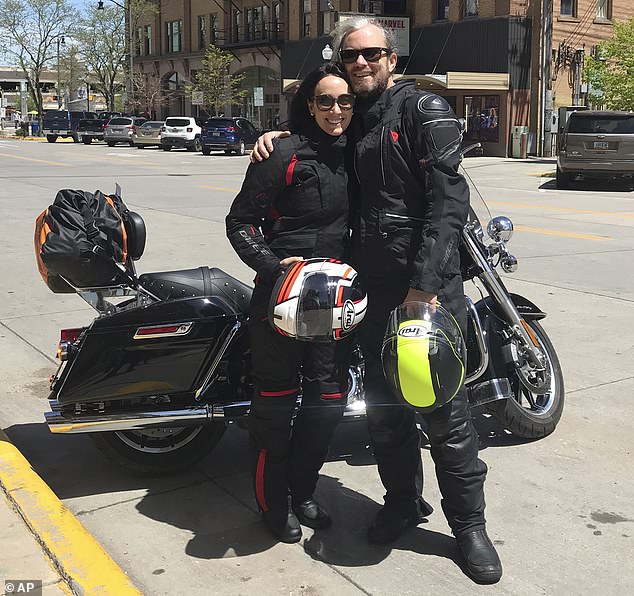 Johnson’s fiancée, Jaclyn Trop (pictured, left, with Johnson) said Johnson was not a strong swimmer and was likely swept away by the river’s current 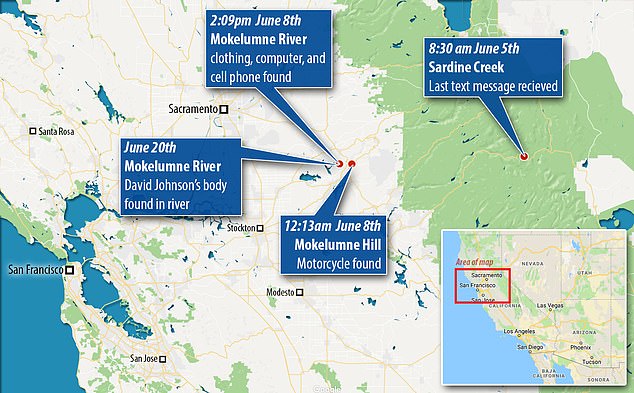 A map showing Johnson’s last whereabouts, from his final test message to where his belongings and body were found

Officials say the river is at high flow, and moving at a rate of more than 35mph as the state’s massive snowpacks are melting and pouring into surrounding waterways and creeks.

Authorities began searching for Johnson on the morning of Saturday, June 8, one day after he was due to arrive at his home in Sacramento County.

However, on Monday, June 17 – twelve days after he was last heard from – the sheriff’s department ended its active search and rescue effort.

‘He is so full of life and I’ve just never met anyone like him,’ Trop, his fiancée told CBS This Morning. ‘There are just so many questions.’

Bassett, who tweeted the news about Johnson’s body being found, said his family will share memorial service details in the coming days.

The Calaveras County Sheriff’s Office did not immediately return DailyMail.com’s request for comment.