When 24-year-old geologist Daniel Robinson went missing in the Arizona desert in June, he was obsessed with a woman he barely knew and disappeared just hours after sending her a desperate final text message, DailyMail.com can exclusively reveal.

‘The world can get better, but I’ll have to take all the time I can or we can, whatever, to name it,’ he wrote to the woman identified only as Katelyn.

Eighteen hours later, Robinson turned up at a remote work site deep in the Arizona desert outside the booming town of Buckeye. He stayed for 15 minutes, then drove off. He has not been seen or heard from since.

But his obsession with the woman he met delivering her liquor while working his side job and his despondency over her unrequited feelings has – up to now – been overlooked.

Robinson’s case has been cited as evidence that the media spends too much of its time reporting on missing white women such as Gabby Petito and not enough on people of color.

Geologist Daniel Robinson, 24, has been missing since June 23, when he was last seen leaving his worksite in Buckeye, Arizona 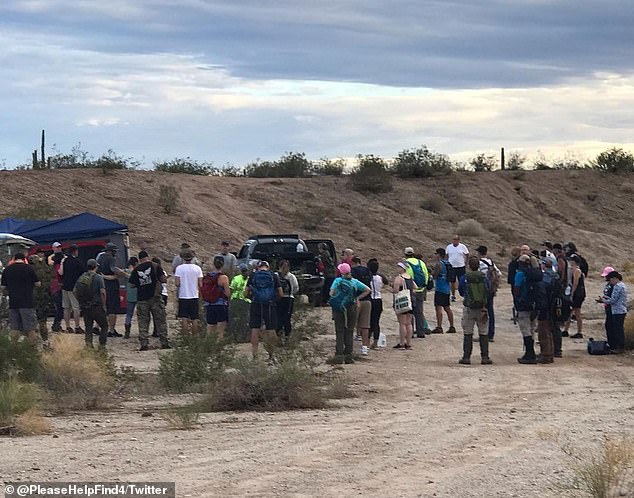 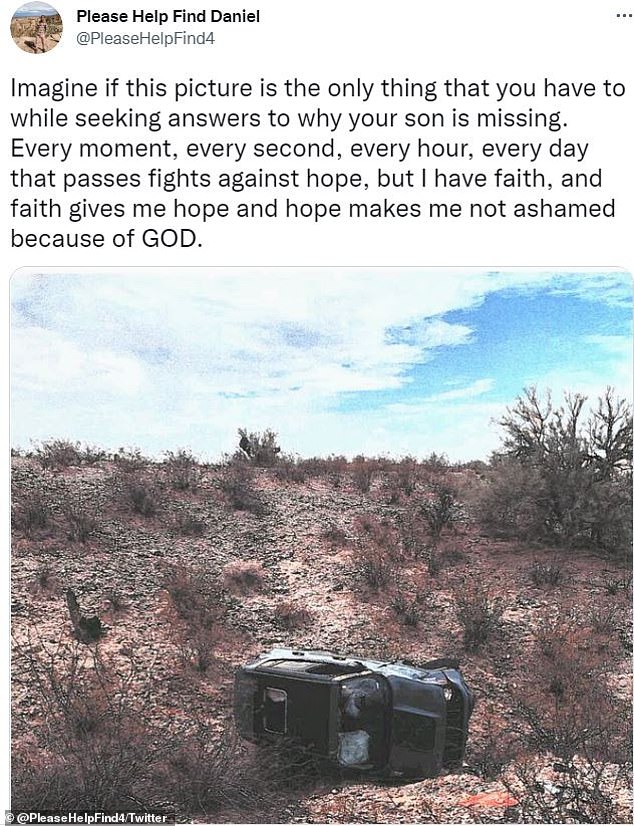 Robinson showed up to work at 9:30 am at a remote desert site but abruptly left a short time after in his blue Jeep renegade and was never seen again. His car was found almost a month later on July 19, at the bottom of a 20-foot ravine (pictured)

MSNBC’s Joy Reid mentioned his case on air, saying she had ‘never heard of it until this friend of mine sent it to me. And I guess, that’s the issue, isn’t it?’

Her guest, Lynette Grey Bull of the Not Our Native Daughters Foundation, called the media’s lack of focus on Robinson’s case ‘systemic racism.’

Other media outlets have carefully skirted Robinson’s relationship with Katelyn – whom he only met while delivering alcohol at her home.

The Independent wrote a lengthy piece under the title ‘Daniel Robinson: Everything we know about geologist missing in Arizona desert under bizarre circumstances’ without mentioning the key evidence.

NewsNation reported on his father’s determination to find the truth, again without mentioning Katelyn. 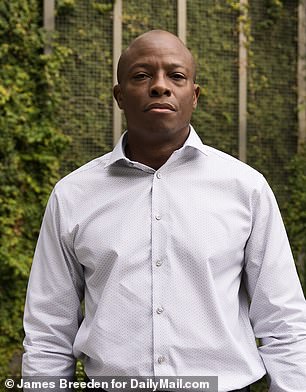 His father, disabled Army vet David Robinson, has been in Arizona for months trying to find out what happened to his son

CNN had a piece on how black people are frustrated with the media over coverage, but again Katelyn’s existence was nowhere to be found, even though it is key in the report prepared by Buckeye police.

Robinson – who was born without his right hand – met Katelyn on his side job delivering groceries for Instacart.

When he turned up with a booze order at her home in the Phoenix suburb of Laveen on June 12, Katelyn and a friend who was with her, invited him in.

‘Katelyn said she believed Daniel was very nice and she and her female friend asked Daniel if he wanted to hang out with them,’ the police report said.

‘Katelyn said she and her female friend “were drunk” and that looking back on it, she shouldn’t have invited a stranger into her home.’

She added that she thought he was ‘harmless as he only had one arm and was short in height.’

Katelyn – whose last name is redacted in reports  – and Daniel exchanged numbers, but she insists, nothing else happened.

Within a week, he arrived at her house unannounced, and with only a brief exchange of messages between them, Robinson texted Katelyn: ‘I couldn’t stop thinking about you.’ 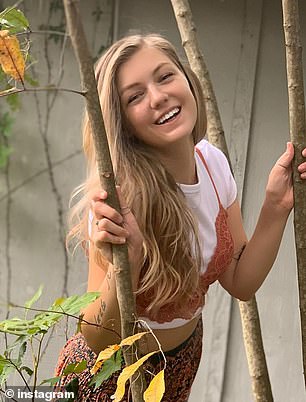 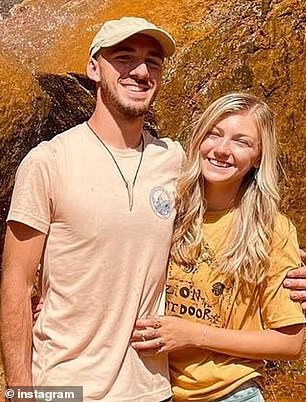 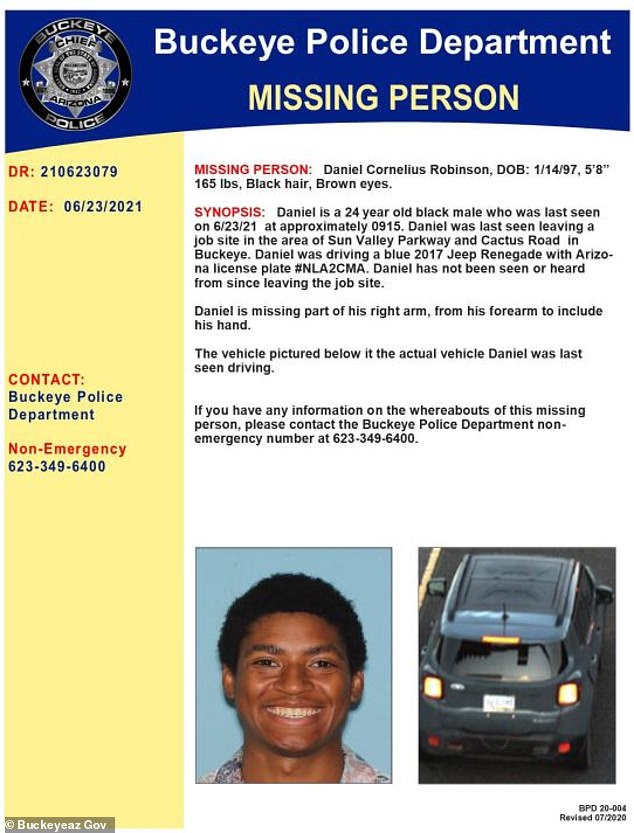 Media outlets, however, have failed to mention a key part of a Buckeye Police report that revealed Robinson had become obsessed with a Phoenix woman he barely knew and disappeared just hours after sending her a desperate final text message 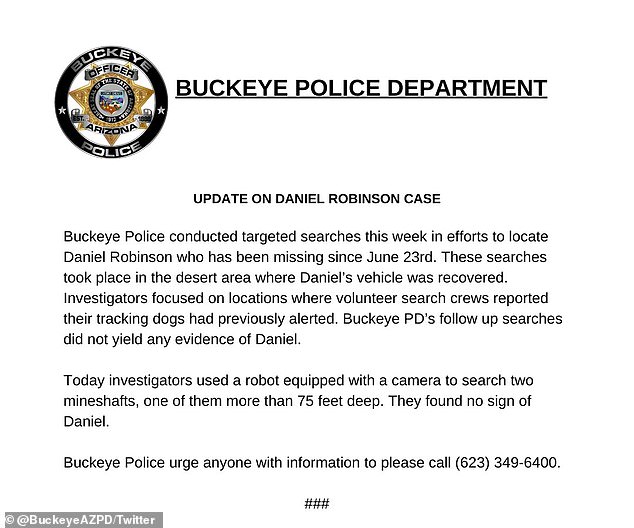 Robinson believes the Petito investigation unexpectedly elevated his son’s case. He has claimed cops have been providing updates due to the public pressure

By June 20 his message was ‘I love you.’ She tried to rebuff him.

‘Honestly you showing up at my house unannounced made me extremely uncomfortable, she replied. ‘I don’t see us hanging out any time soon.’

The next day he turned up at her house again.

‘This isn’t normal nor acceptable,’ Katelyn told him. ‘If someone has expressed that you’ve made them uncomfortable, you need to back off.’

‘Do you hate me?’ Daniel replied. ‘I don’t hate you but please leave me alone,’ Katelyn texted back.

He took 15 hours to respond with his final text to her. Eighteen hours after that he vanished.

Police were so alarmed at Robinson’s messages to a woman he hardly knew that they advised Katelyn about stalker laws and suggested she might want to make an official complaint.

Workmate Roger Prutsman was also concerned about his colleague. He told police he knew something was wrong.

When he asked Robinson what was bothering him, he replied: ‘What if there was a girl you liked, but you couldn’t have?’

Robinson, the youngest of four children, grew up in Columbia, South Carolina, and graduated from the College of Charleston. 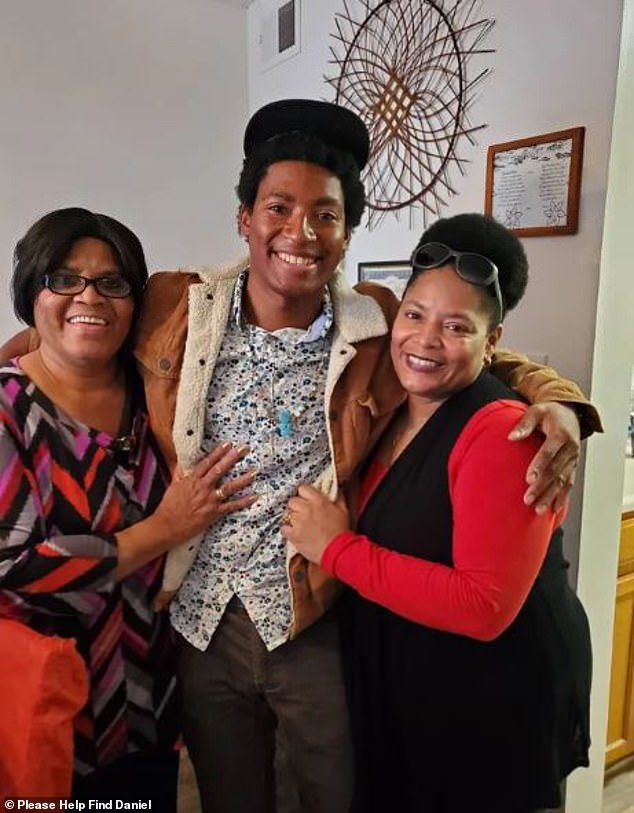 Robinson – who was born with one hand – was the youngest of four children. He grew up in Columbia, South Carolina, and graduated from the College of Charleston 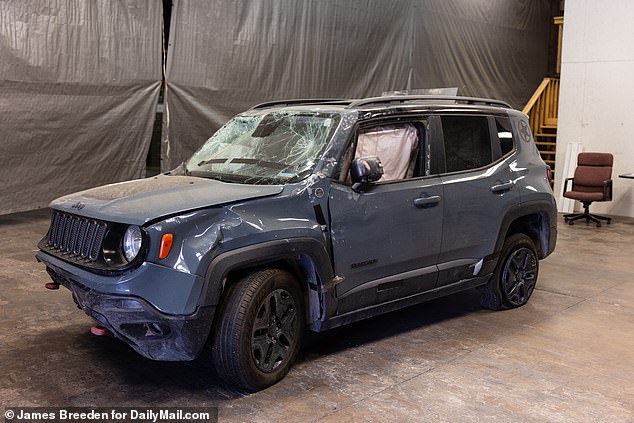 Daniel’s Jeep, which private investigator Jeff McGrath claims raises a lot of questions about the circumstances surrounding his disappearance. The vehicle was found with its airbags deployed and with Daniel’s wallet, clothes, phone and credit card inside 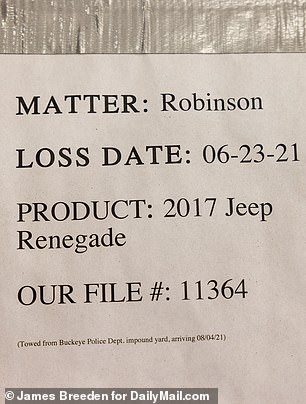 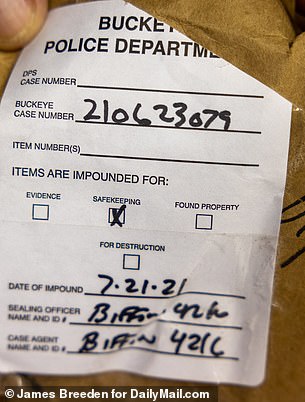 Daniel’s father said his son’s clothes, possessions and car were handed over to him as soon as he arrived in Arizona from South Carolina instead of being examined as evidence. Pictured: The Buckeye Police Department’s label on a bag of Daniel’s clothing (right) which they have marked as impounded for safekeeping, not evidence

He then attended a course in Tucson and soon after was offered a job by the engineering firm Matrix New World.

He stayed in Arizona, initially living with Prutsman and then getting his own apartment in Tempe.

His father, disabled Army vet David Robinson, has been in Arizona for months trying to find out what happened to his son, who he described to DailyMail.com as ‘a go-getter.’

‘He was born with one hand. Some people think that’s a handicap, but not Daniel. Daniel is not the type of a guy who views that as a handicap.’

The older Robinson, who served two tours in Afghanistan and was injured by a roadside bomb, said his ex-wife bought a prosthesis for her son, but he refused to wear it.

‘He just wanted to be Daniel,’ said David Robinson, 51.

In an interview with AP last month, Robinson said he believes the Gabby Petito saga unexpectedly elevated his son’s case as people used the #findgabypetito hashtag on Twitter to draw more attention to cases of missing people of color.

‘I was working hard previously trying to get it out nationally for three months straight,’ said Robinson, who’s communicated with other families about the coverage disparity.

‘This is bigger than I thought. … It isn’t just about my son Daniel. It’s a national problem.’

David Robinson has set up a GoFundMe page to help finance his search for his son. So far, it has raised more than $142,000.

Daniel Robinson was last seen on June 23 when he turned up for work, his second job of the day, at 9:30 am at a remote desert site, that builders are hoping to develop.

It was an abnormally cool and rainy day for the area. He met up with pump technician Ken Elliott who he had never met before and they were to work on a deep well. 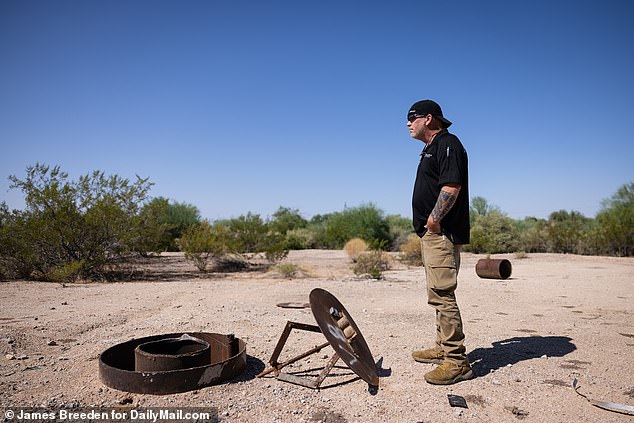 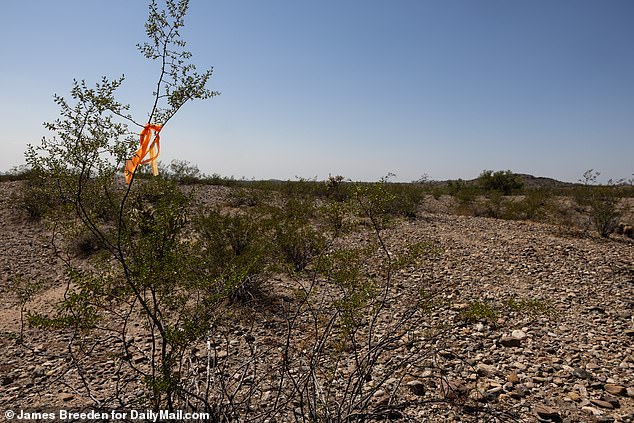 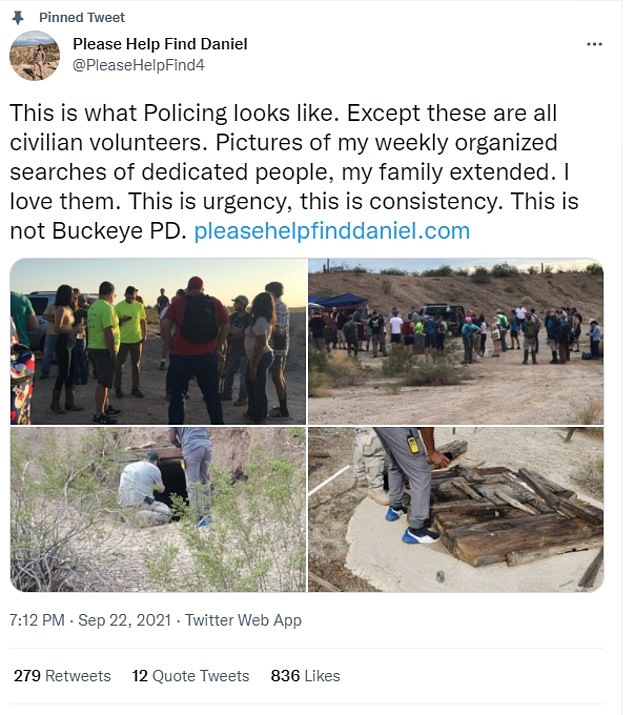 Elliott told police that Robinson ‘was saying things that did not make sense,’ such as asking if he wanted to go with him to Phoenix to rest.

Elliott told him he had work to do, but just 15 minutes after he arrived, Robinson abruptly left without a word.

Elliott later followed his tire tracks in the rain-soaked dirt road and found that instead of going left at a T-junction to return to Phoenix, Robinson turned right into the unrelenting Sonoran Desert.

It was on its side at the bottom of a 20-foot ravine. The vehicle’s airbags were deployed.

Certainly, there are potential discrepancies in the official version that something triggered Robinson into going into the desert, where he stripped off and wandered away from his car.

Rancher Shelton, whose cattle graze 14,000 acres in the Buckeye area, is convinced the car had only been in the ravine that leads to the Hassayampa River a short while when he came across it.

‘It was clean,’ Shelton, 43, told DailyMail.com. ‘And my cows would have found it. Cows are inquisitive creatures and would have licked it.’

Shelton pointed to one of Robinson’s size 11½ Red Wing work boots that was stuck under the truck. 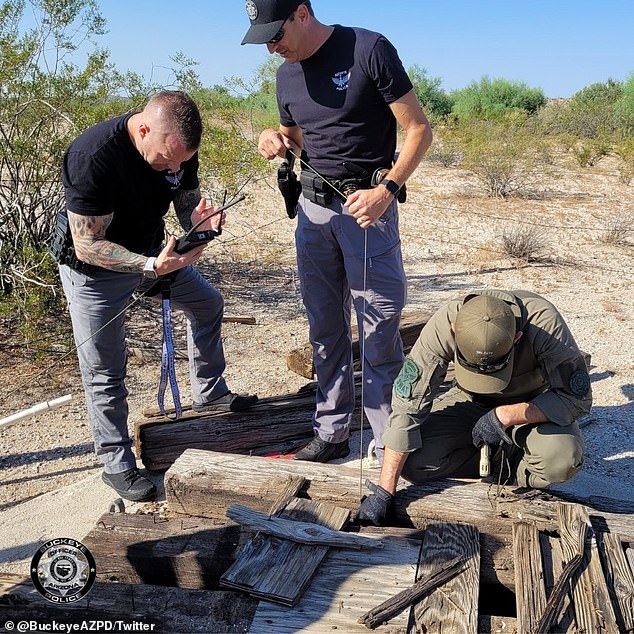 ‘That makes no sense,’ he said. ‘If you were delirious and ripped off all your clothes and wandered into the desert you wouldn’t stick one of your shoes under the car.’

‘My personal theory is that someone deliberately wrecked that vehicle out there.’

Jeff McGrath, a private investigator brought in by the Robinson family, agrees. He believes Robinson was upset about Katelyn’s rejection and went on an all-night video game binge.

When he turned up at work he was so tired that he deliberately drove into the desert to take a nap where he wouldn’t be found.

‘At that point I think somebody – not a good person – found him. I can’t imagine what they did with him, but I believe his vehicle was crashed a couple of times and then its final rest was at the bottom of that ravine,’ McGrath, 51, told DailyMail.com.

He pointed out that the 2017 Jeep Renegade’s airbag control module showed that the car was driven 11 miles after the airbags deployed and the ignition was turned 46 times.

He also said the damage to the vehicle appeared to show that it had been hit above the windshield. ‘It looks like a bat or a pipe, or it could be a large rock – anything blunt.’ 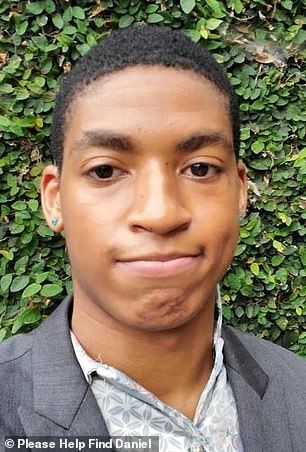 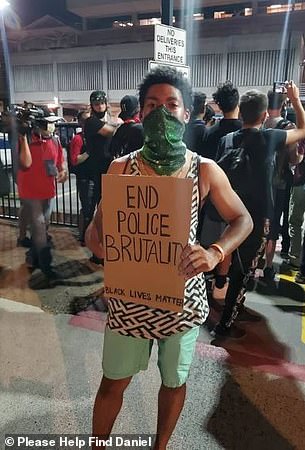 David Robinson described his son to DailyMail.com as ‘a go-getter.’ Workmate Roger Prutsman told police he was concerned about Daniel and knew something was wrong

The driver’s seat belt was buckled and, despite the severe damage to the Jeep, no blood was found inside.

Robinson’s wallet, phone and credit cards were all in the car. His clothes – T-shirt, jeans turned inside-out, shorts, orange work vest, boots and two mismatched black socks – were all nearby. One of the socks is Nike, the other Adidas.

McGrath found another black Nike sock three miles away in the desert. He cannot explain it, but it is another reason he believes there is more to the case than meets the eye.

Both McGrath and Daniel’s father believe Buckeye Police did not carry out a thorough investigation into Robinson’s mysterious disappearance.

They point out that Daniel’s clothes, possessions and car were handed over to his father as soon as he arrived in Arizona from South Carolina. ‘Surely these are items of evidence if a crime is found to have been committed,’ said McGrath.

Buckeye Police turned down a DailyMail.com request for an interview. Chief Larry Hall issued a statement saying: ‘We are committed to finding Daniel Robinson. Our investigators are working tirelessly to find answers and bring closure to Daniel’s loved ones.’