A house ravaged by fire has sold for a whopping price, attracting bids from five potential buyers.

The house on Bridge Road, Forest Lodge in central Sydney sold for just under $1.45 million at auction on Friday night.

Advertised as ‘the ultimate blank canvas’, the Victorian terrace consists of four large rooms, and a rear two storey wing that was gutted by the fire, leaving only a brick skeleton of the original kitchen, family room and upstairs rooms.

A house gutted by fire has sold for a whopping $1.45 million at auction on Friday 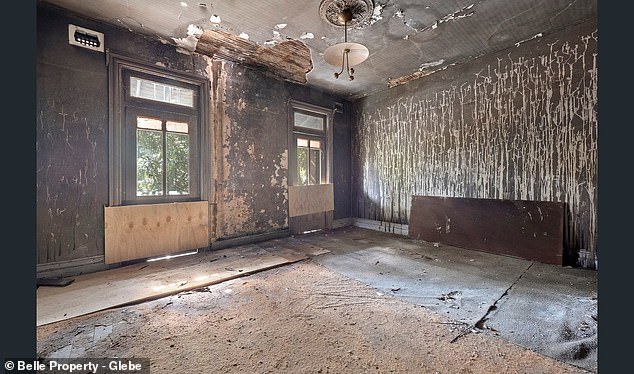 Described as the ‘ultimate blank canvas’ the Victorian terrace was ravaged by fire, leaving little more than an empty shell

It sits upon a narrow but deep plot of land approximately 250sqm.

While the origins of the fire are not known but it had a devastating impact on the home that was held by the same family for decades.

Sections of the roof are missing in the back of the house, where most of the damage occured leaving just the shell of the house.

The terrace had been all but destroyed, with front windows boarded up, gaping holes in one of the rooms and the front balcony being held up by support beams. 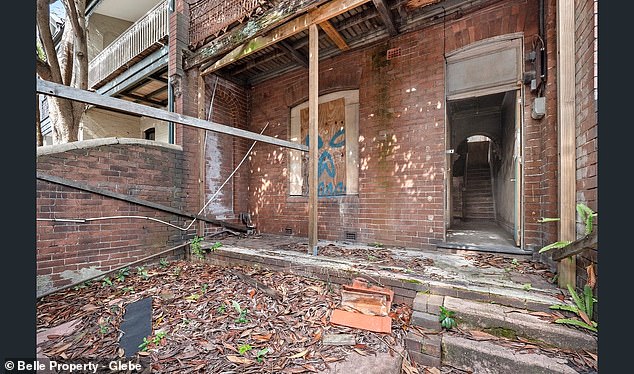 The terrace of the house had all but been destroyed, with the windows boarded up and the balcony being held up by wodden support beams

The interior walls are also covered in soot.

The home is described as a Phoenix rising from the ashes and a perfect opportunity for a ‘creative architect and savvy builder to construct a unique and fabulously proportioned family residence once more.…with ample room to establish a landscaped rear garden ideal for family living on the city fringe.’

There are many homes in the suburb of Forest Lodge that have strict heritage orders, with local council putting limits on what is allowed to be knocked down and replaced with new housing. 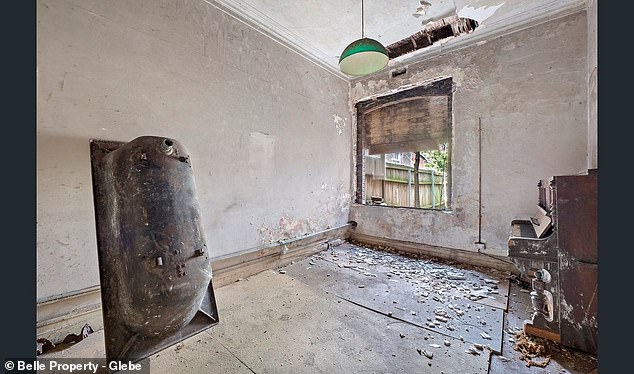