Tom Cruise and ‘girlfriend’ Hayley Atwell were seen filming action-packed scens on top of a moving steam train for Mission Impossible 7 on Thursday.

The actor, 58, and Agent Carter star, 39, proved to be a daring duo as they ran on top of the locomotive, which was being driven on the North Yorkshire Moors railway.

In the death-defying scenes, Hayley was seen speeding across the coal space behind the engine, and was attached with a wire to ensure she remained safe whilst doing the stunt. 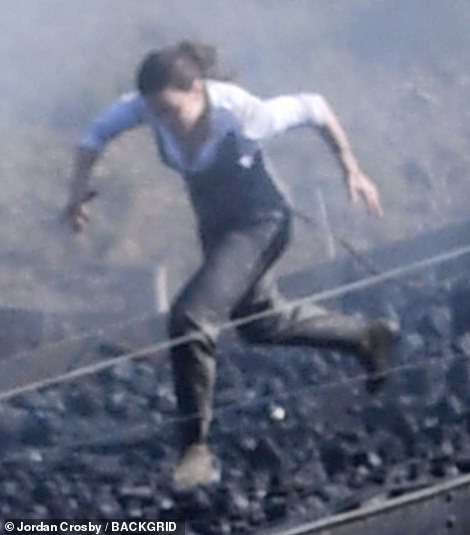 Dramatic: Tom Cruise and ‘girlfriend’ Hayley Atwell proved to be a daring duo as they RAN on top of a moving steam train while filming action-packed scenes for Mission Impossible 7 at the the North Yorkshire Moors railway on Thursday

After Hayley had finished her stunt, it was Tom’s turn and he was seen climbing up onto the locomotive before also running full pelt across the coal.

Crew members were stationed on the other end of the cab, filming the pair’s stunts while the train continued to move at speed along the tracks.

Hayley looked stylish for the day’s shoot as she dressed in an open-collared white shirt that she paired with a grey waistcoat and matching trousers.

She pulled her brunette locks into a tight ponytail so that her hair did not obscure her vision whilst she ran along the coals, and she also wore flat shoes. 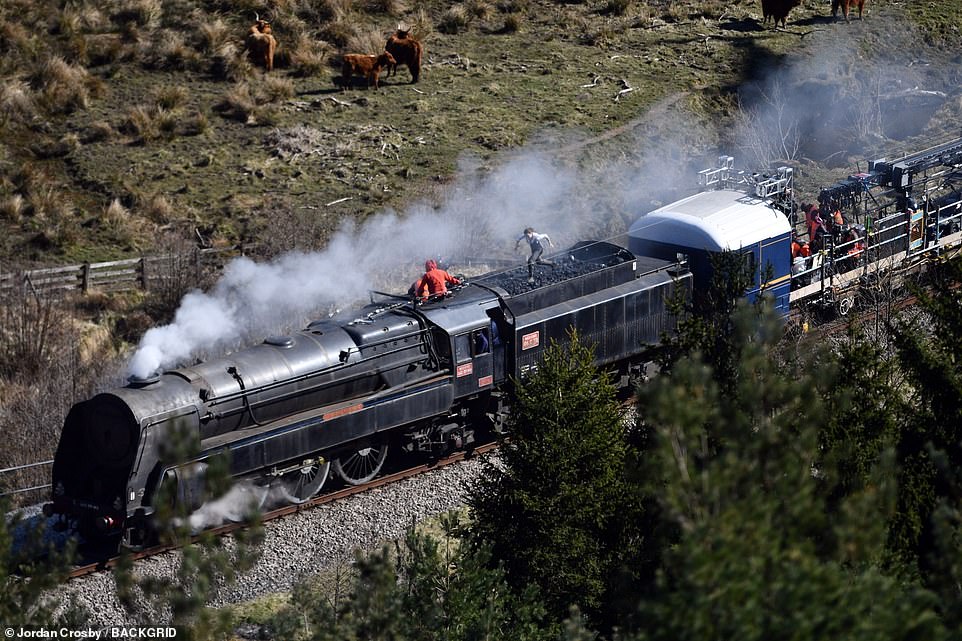 Wow! In the death-defying scenes, Hayley was seen speeding across the coal space behind the engine 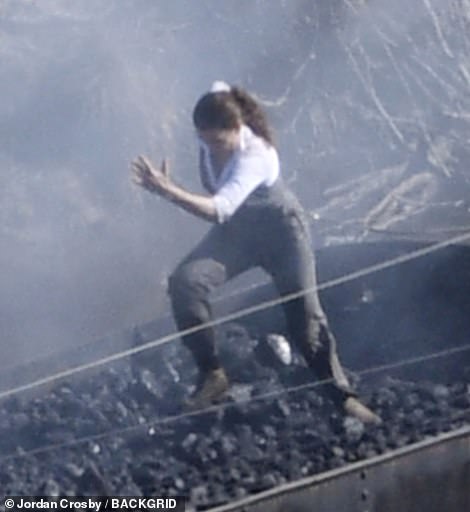 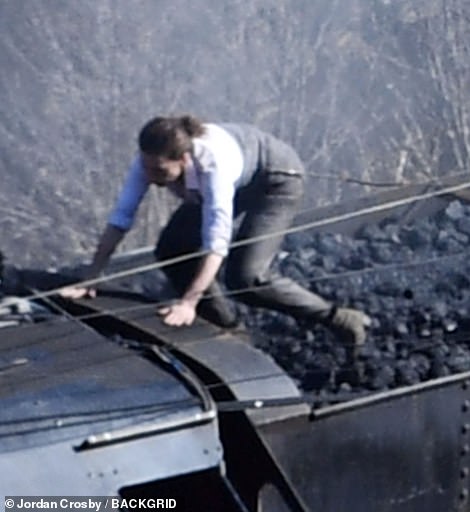 Going for it: Hayley was seen running as fast as she could across the coal 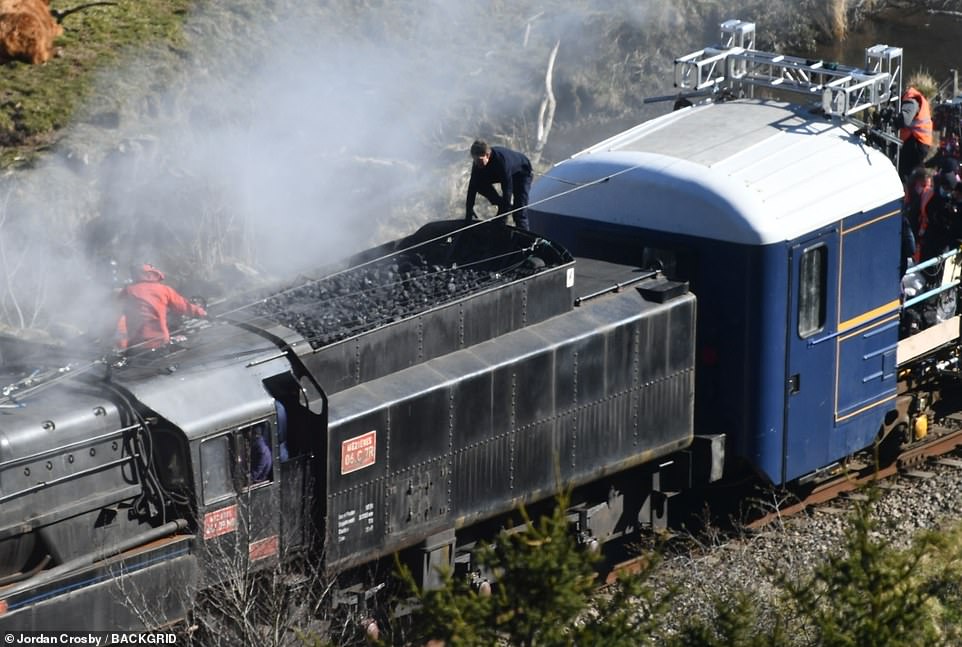 His turn: After Hayley had finished her stunt, it was Tom’s turn and he was seen climbing up onto the locomotive before also running full pelt across the coal 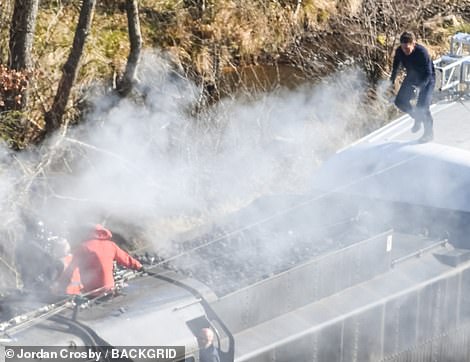 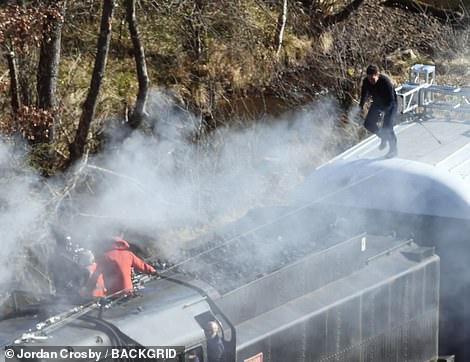 And, action! Crew members were stationed on the other end of the cab, filming the pair’s stunts while the train continued to move at speed along the tracks

Tom, meanwhile, transformed into spy Ethan Hawke by pairing a black long-sleeved shirt over matching trousers, and he also wore gloves throughout the shoot.

There were also crew members stationed on a moving platform that was attached to a facade of the front of a carriage, and they appeared to be on hand to help the two actors with the scene.

A helicopter was also seen flying high above them, filming on a camera that had been mounted onto the front of the cockpit.

Their visit to set comes four months after romance rumours began between them, with sources saying at the time that filming ‘brought them closer’.

Tom and Hayley star opposite Vanessa Kirby and Rebecca Ferguson in the movie where the plot for the latest adventure of Tom’s character Ethan Hunt has been kept firmly under wraps.

The outing is the first for the duo since it was claimed that filming brought them ‘even closer’, as they are said to have become ‘fairly inseparable’ after they ‘hit it off from day one’.

The new ‘couple’ were spotted standing on scaffolding beside a train, which they appeared using to be shooting a scene together.

Tom hasn’t had a high-profile romance since his divorce from ex-wife Katie Holmes, whom he split from in 2012  and shares daughter Suri, 15.

Prior to this, Tom was married to Nicole Kidman from 1990 to 2001. After their split, he retained custody of their two adopted children Connor, 26, and Isabella, 28, who had been raised in the Church of Scientology.

Meanwhile Hayley is said to have split from her English doctor ex earlier this year.

A source told The Sun back in December: ‘Tom and Hayley hit it off from day one.

‘Lockdown, and all the difficulties that came with it, brought them even closer and they’ve become fairly inseparable.

‘They’ve been meeting up after hours, and she’s been to his London pad. They get on brilliantly, and both seem very happy.’

MailOnline contacted both Tom and Hayley’s representatives for comment at the time.

Mission: Impossible 7 is scheduled to be released later this year.

It was claimed in February that location filming on Mission: Impossible 7 had wrapped after a marathon global schedule interrupted by the COVID-19 pandemic.

At the time, Christopher McQuarrie posted that production had finished in Abu Dhabi and he was heading ‘back to London for a few finishing touches.’

The delays due to the pandemic, however, mean that Tom’s plan to go straight into filming an eighth Mission: Impossible movie have had to be shelved, Deadline.com reported.

Filming on Mission: Impossible 7 was supposed to start in Italy in February 2020, but the COVID-19 pandemic delayed it until July 2020.

Filming began in the UK, moved to Norway and then back to Italy where it ground to a halt once again after 12 crew members tested positive for the coronavirus.