John Bradburne didn’t just look like Jesus, with his long hair, beard and simple, austere clothes. He also gave his life for others.

In September 1979, the English-born missionary, poet and warden of Mutemwa leper colony in Zimbabwe, then Rhodesia, was caught up in the country’s civil war, the Rhodesian Bush War.

His friends told him to flee the imminent arrival of the bloodthirsty ZANU-PF guerillas who thought he was an informer. But he insisted on remaining with the lepers.

When the guerillas came, they bound Bradburne’s hands, took him on a forced march and humiliated him. They made him dance and sing, got him to eat excrement and dangled young women in front of him, before interrogating him and subjecting him to a rigged trial.

They offered him the chance to escape so long as he left the country and abandoned his beloved flock. He refused and, when he knelt down to pray, they shot the 58-year-old in the back with a Kalashnikov, leaving him half-naked by the side of the road.

He was buried in a Franciscan habit, as he had requested, in a cemetery 11 miles outside the capital city, Salisbury, now Harare. 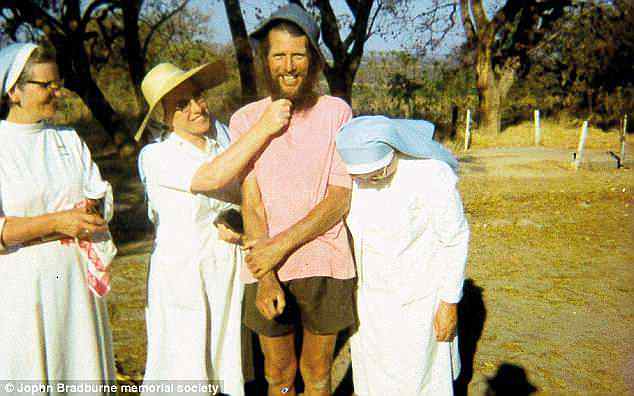 If Bradburne does become a saint, it will be the extraordinary concluding chapter in a thoroughly extraordinary life — one which started in a very conventional way

And now, nearly 40 years after his brutal murder, Bradburne is on the verge of becoming a saint — the first British saint since 1970, when Pope Paul VI canonised Cuthbert Mayne and 39 British companions (‘The 40 Martyrs of England and Wales’), who were executed for treason between 1535 and 1679, and the Scottish Catholic martyr John Ogilvie, canonised in 1976.

Campaigners, including Bradburne’s niece Celia Brigstocke, are convinced of his power to perform miracles. Mourners at his funeral said they saw drops of blood beneath his coffin, even though no blood was found inside when it was opened. Others claim that, a decade ago, a man was cured of a brain tumour by praying to Bradburne.

And now, with the support of the Archbishop of Harare, the Most Rev Robert Ndlovu, they have raised the money to fund a Vatican investigation to justify his canonisation. 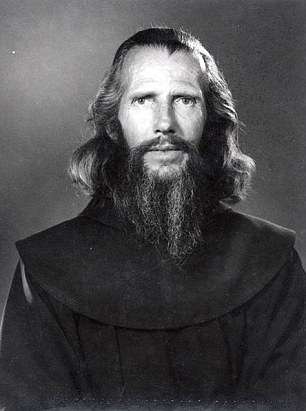 The 58-year-old was killed during missionary work in Zimbabwe, then Rhodesia, in 1979

If Bradburne does become a saint, it will be the extraordinary concluding chapter in a thoroughly extraordinary life — one which started in a very conventional way.

Born in Westmorland in 1921, he was the son of an Anglican rector and, by coincidence, a relation of Lord Soames, last Governor of Southern Rhodesia, who oversaw the independence of Zimbabwe in 1980, soon after Bradburne’s death.

After private school — Gresham’s in Norfolk — he fought in World War II with the 9th Gurkha Rifles, heroically escaping Singapore when it was invaded by the Japanese in 1942.

Bradburne was recommended for the Military Cross for his escape. He had taken refuge in the jungle up country, living off the land. He took a boat to try to reach British-controlled territory, only to be shipwrecked.

He eventually made it to India, and then returned to fight in Burma for the Chindits, British Army raiding groups, with whom he flew into the jungle, deep behind enemy lines, in a glider.

After the war, in 1947, he converted to Catholicism, with aspirations of becoming a monk. But with no monastery prepared to accept him immediately, he opted to travel instead and wandered the world for 16 years, trying his hand at teaching and forestry, and toiling as a stoker on a steam ship. His only worldly belonging was a single Gladstone bag.

On trips home, Bradburne stayed with Carthusian monks in England, and with other religious orders in Israel and Belgium. At one stage, he walked hundreds of miles to Rome and lived for a year in the organ loft of a church in an Italian mountain village. 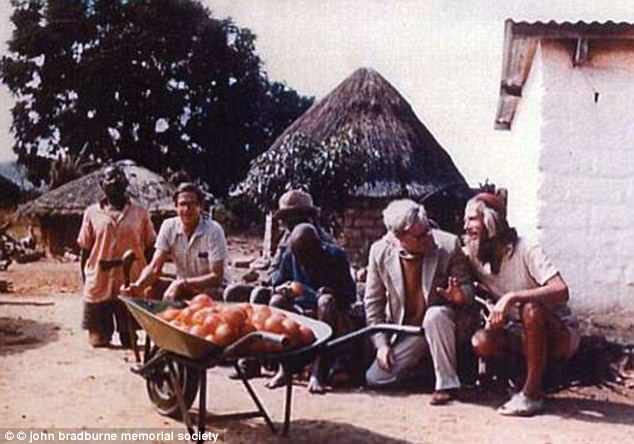 Born in Westmorland in 1921, Bradburne (far right) was the son of an Anglican rector and, by coincidence, a relation of Lord Soames, last Governor of Southern Rhodesia, who oversaw the independence of Zimbabwe in 1980, soon after Bradburne’s death 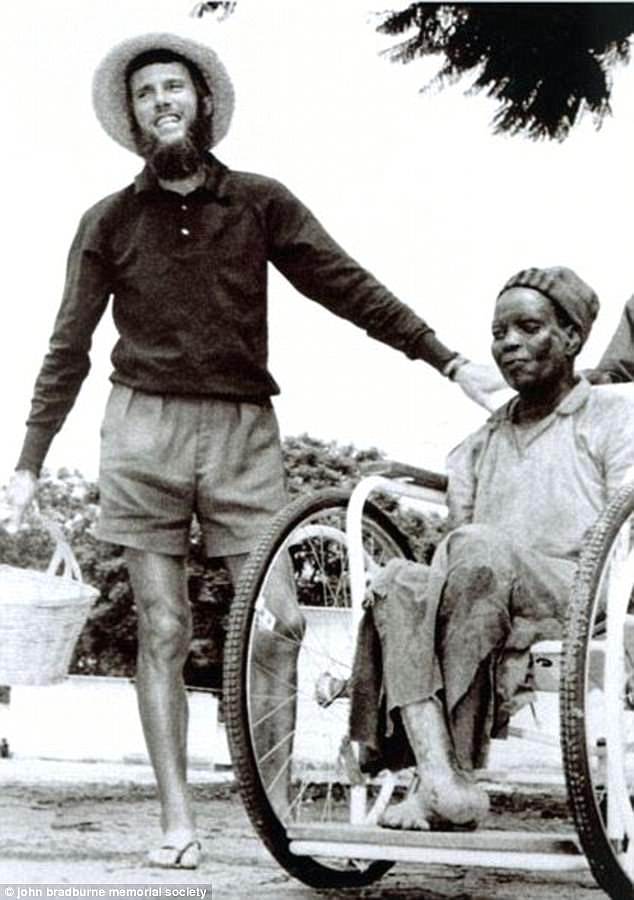 Where others had rejected the 80 cruelly maimed lepers, Bradburne embraced them and made his home among them, eventually becoming the warden of the colony

He slept in the oddest of places: tin huts; attics; even, at one point, a hen run. He lived as a hermit on Dartmoor, sang in the choir of Westminster Cathedral and became caretaker of a cardinal’s Hertfordshire country house for three years. In 1956, he joined the Franciscan Order as a layman.

And, throughout this period, he wrote poems — 6,000 in fact, which won him the record for the most prolific poet in the English language in the 2014 Guinness World Records. His poems concentrate on the power of love.

One in particular hauntingly anticipates his wicked, violent murder:

‘We want to make it very clear

And easy for you all.

The casting out, by Love, of fear

Bradburne’s restless life — his biography by Didier Rance is aptly subtitled The Vagabond Of God — finally took root in Rhodesia. There, in 1969, he found his calling in the rundown leper colony of Mutemwa.

Bradburne had asked a Gurkha comrade John Dove if he knew of any African caves where he might pray. Dove took him to the Mutemwa leper colony at Mutoko, 90 miles east of Salisbury. 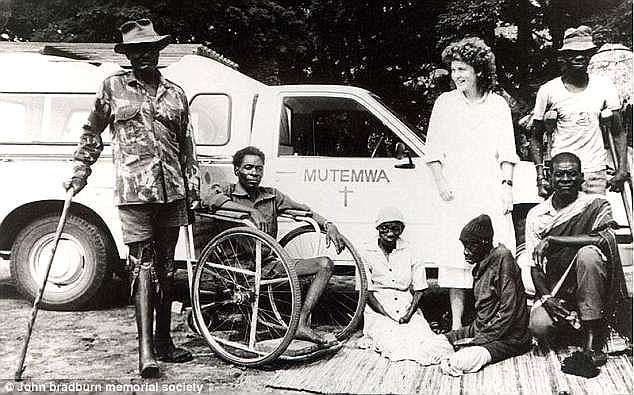 Campaigners, with the support of the Archbishop of Harare, the Most Rev Robert Ndlovu, they have raised the money to fund a Vatican investigation to justify his canonisation

Where others had rejected the 80 cruelly maimed lepers, Bradburne embraced them and made his home among them, eventually becoming the warden of the colony. Before he arrived, the lepers were treated as outcasts, forced to wear bags on their heads to hide their disfigurement whenever an able-bodied visitor arrived.

In contrast, Bradburne prayed with them, drank with them and slept alongside them. He bathed their wounds, cut their nails, shooed away the rats that hounded the colony and, when they died, buried them with dignity.

He built them a small church, and wrote each leper a poem. With his fine voice and classical education, he even taught them to sing Gregorian plainchant in Latin.

Even today, the colony plays his music, beaten out on drums by lepers with no hands. And every year, tens of thousands of people turn up at the colony for Bradburne’s memorial mass.

In 2009, on the 30th anniversary of his death, a mass commemorating Bradburne was held at Westminster Cathedral.

But in 1973, his actions were not so warmly received. The Leprosy Association, which ran the colony, took against Bradburne’s caring approach. They preferred to refer to the lepers by number rather than name, and thought Bradburne’s decent food provisions for them were too generous.

When the association kicked him out, he only moved as far as a nearby tin hut, just outside the colony’s wire fence, with no water or electricity, and continued to tend to the lepers. 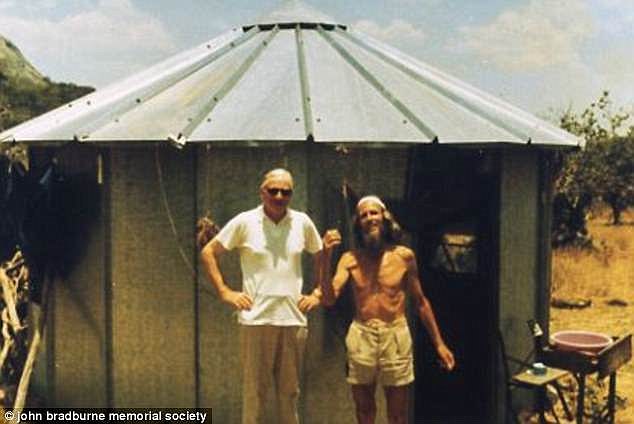 Before he died, Bradburne said that he had only three wishes — to help lepers, to die a martyr and to be buried in a habit of the Franciscan Order. He achieved all three

Here he lived for six years, denying himself everything except food, water and prayer. Wise churchmen, who appreciated Bradburne’s qualities, insisted that he should bring the Eucharist to the lepers; and so the association was forced to admit him, albeit only for brief visits, into the colony.

It was a simple life, of an ancient, Biblical quality. Bradburne described how delighted he was on the day a swarm of bees arrived at the colony; how distraught he was when a tame eagle died.

And then, just as Bradburne had found his ultimate meaning in life and his permanent home, the Rhodesian Bush War took it away. The war raged from 1964 until December 1979 — ending just three months after his murder.

There were three forces at war: Ian Smith’s Rhodesian government; Robert Mugabe’s Zimbabwe African National Union; and Joshua Nkomo’s Zimbabwe African People’s Union. And while the civil war ended white minority rule in Zimbabwe, Bradburne was one of the victims.

A holy man tending to the sick in a remote corner of the country should have been immune from this conflict. But, in the chaos, the madness and malice of civil war, he was considered somehow suspect — and his fate was sealed.

Before he died, Bradburne said that he had only three wishes — to help lepers, to die a martyr and to be buried in a habit of the Franciscan Order. He achieved all three.

Now it seems that, in time, this exceptional Englishman will also become a saint.