Mississippi dam is ‘imminent danger’ of collapsing due to heavy floods

A Mississippi dam is on the verge of imminent collapse, officials said Tuesday, urging hundreds of residents to evacuate as the region is bombarded with heavy rains and flash floods.

On Tuesday the Oktibbeha County Lake Dam swelled due to pounding rains that raised water levels in the area near Starkville.

Water got between the dam and the ground beneath it, compromising the structure’s integrity, engineer Clyde Pritchard said to the Starkville Daily News.

Officials are now urging residents to evacuated the area, but it is not mandatory.

If it does break, the dam will flood 17,400 acres of nearby land to some extent. About 250 people would have to evacuate at least 112 households, the Commercial Dispatch reported in September.

The Oktibbeha County Lake Dam in eastern Mississippi is ‘imminent danger’ of failing, officials said Tuesday due to heavy rains and floods. On Tuesday county officials tried to relieve water pressure on the dam by placing pipes into it to carry out water (above) 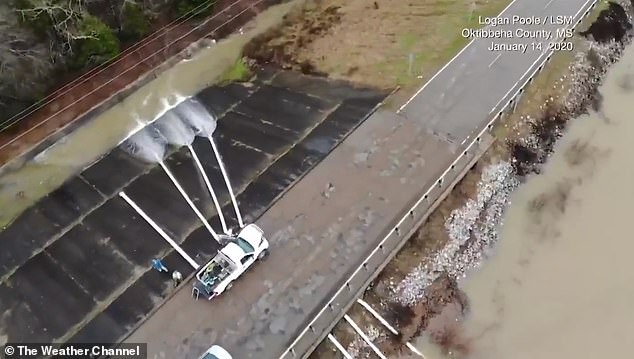 Aerial footage shows county emergency workers trying to relieve water pressure from the dam. Water got between the dam and the ground beneath it, compromising the structure’s integrity according to engineer Clyde Pritchard 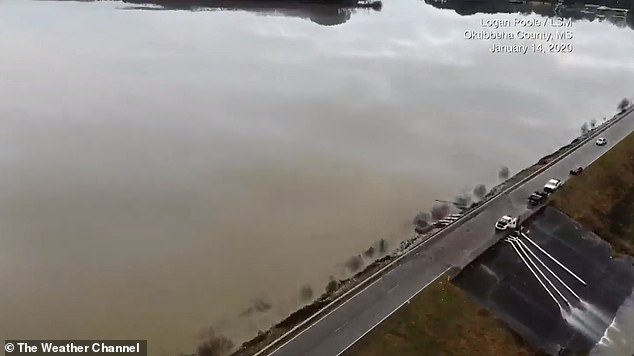 An aerial view of the dam pictured above. If the dam does break, it will flood 17,400 acres of nearby land and affect some 250 locals in at least 112 households 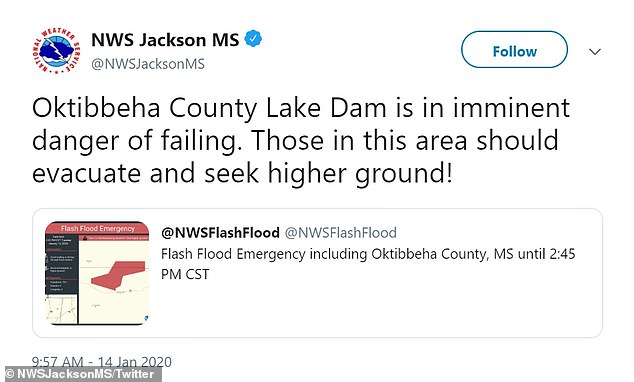 ‘There is a high probability of failure,’ the National Weather Service in Jackson said Tuesday. ‘Those in this area should evacuate and seek higher ground!’ 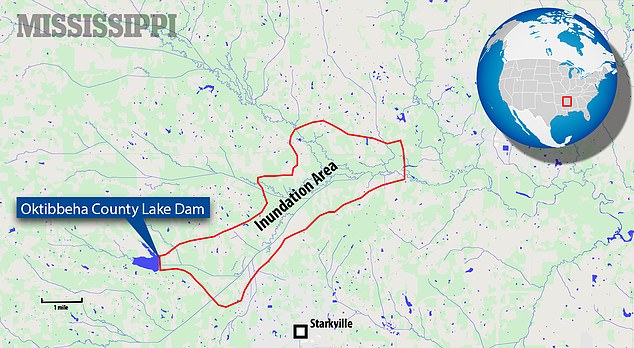 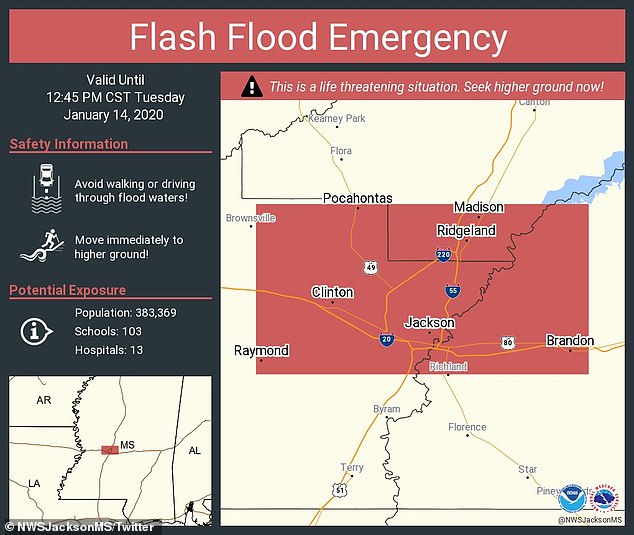 I’m on the scene by Oktibbeha County Lake. Emergency and county workers have placed four tubes to relieve water pressure on the dam. Stay tuned for more information #WCBINEWS pic.twitter.com/1cXjhwfR4g

‘There is a high probability of failure,’ the National Weather Service in Jackson said. ‘Those in this area should evacuate and seek higher ground!’

‘After inspection, the County Engineer believe failure of the dam is imminent,’ The Mississippi Emergency Management Agency said.

On Tuesday county officials were seen trying to relieve pressure from the dam using tubes to pipe out water from the levee.

The Oktibbeha County Board of Supervisors has issued a warning and activated the emergency action plan.

As of Monday evening only one person had evacuated. 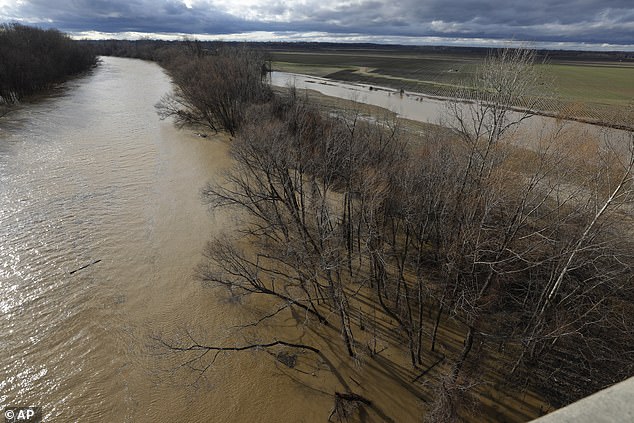 Severe storms have swept across the South, bringing severe flooding. The swollen Yazoo River in Mississippi pictured on Saturday 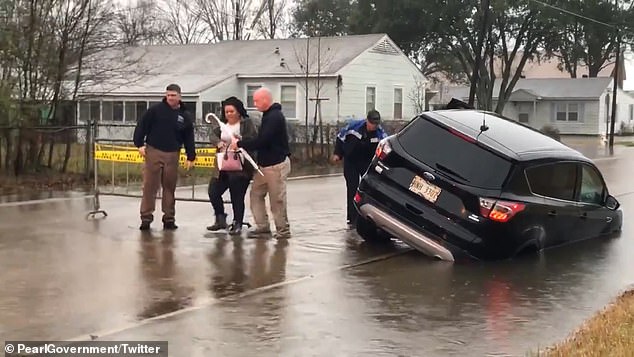 A woman pictured being rescued on Tuesday in Pearl, Mississippi after her car got stuck in severe flooding 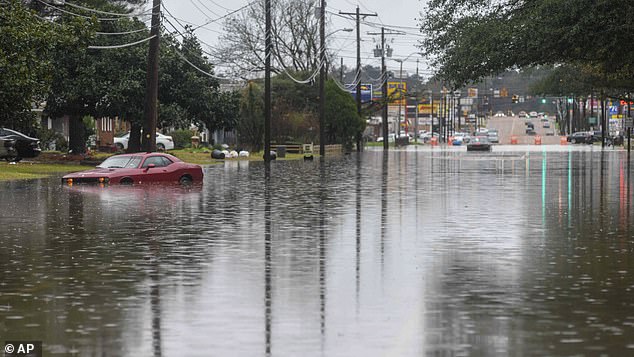 A woman sits stranded in her Dodge Charger on a flooded street in West Jackson, Mississippi on Tuesday 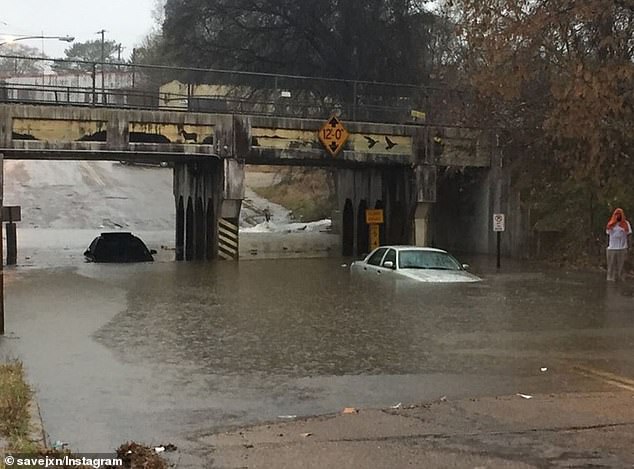 Some drivers in Jackson, Mississippi were left completely stranded on Tuesday as heavy floods inundated the region 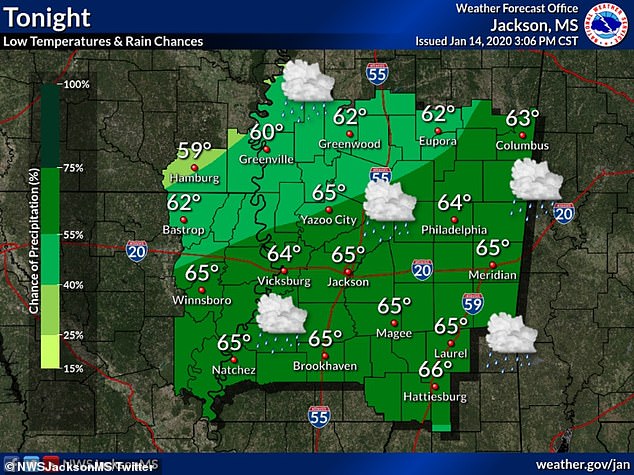 The weather map for the Jackson, Mississippi area on Tuesday pictured above

Oktibbeha County is expecting to see half an inch or more of rain on Tuesday and possibly Wednesday. The weather service in Jackson issued a flash flood emergency warning for northern Oktibbeha County and south central Clay County.

Flash flooding is also forecast to affect northeast Louisiana, southeast Arkansas, and north portions of central Mississippi due to a cluster of showers and thunderstorms.

Floods were so bad on Tuesday that the Warren County Fire service and Warren County Sheriff’s Department in Mississippi rescued a driver who got trapped in a car in water.

Later on Tuesday Clay County also warned residents, located downstream of the dam, to be on alert warning that they may need to evacuate if the dam breaks.

In September the county sought federal funds to replace the Oktibbeha dam.

The dam, built in the 1960s, has been in need of repairs for years. In 2016 state inspection confirmed the levee needed updates, but the county has struggled to get the funds to do so.

Nearly 8 inches of rain has fallen this month at the Mississippi State University campus in Starville. At least 1.37 inches of rain fell Tuesday morning in Starkville.

This has been the wettest start to January since 1989, according to Weather.com. 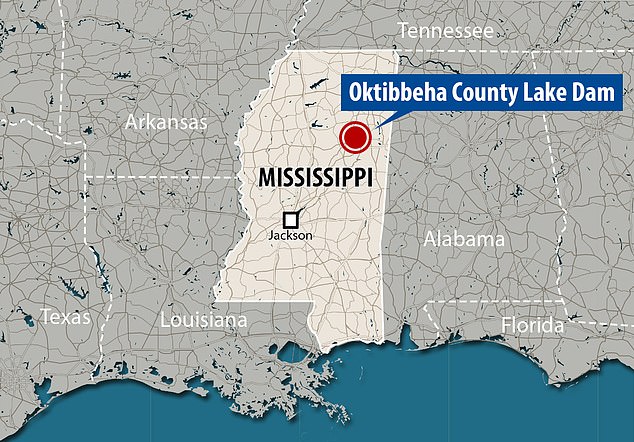 The Oktibbeha County Lake Dam is located in eastern Mississippi

Winter storms in the South have claimed the lives of at least nine people so far.