A Missouri man was left bedridden for 11 years due to an adrenal gland disorder before he came up with a surgery that cured him.

Doug Lindsay, who majored in biology, had just completed his first day of classes during his senior year in fall 1999 when he collapsed.

He felt so weak and dizzy in the days that followed that he was forced to drop out of college and spent most of his days in a bed in his childhood home in St Louis.

Lindsay spent years reading medical research and visiting several specialists, none of whom could figure out what was wrong, reported CNN.

Finally, after teaming up with a professor who specialized in autonomic nervous system disorders, he discovered that the cells in the center of his adrenal glands were enlarged and producing too much adrenaline.

With no surgery out there that could cure him of his condition, Lindsay decided to invent one.

He theorized that cutting out the center of his adrenal glands might help improve his health. After convincing a surgeon to perform the procedure, he was finally able to sit up for several hours and even walk a mile.

Lindsay, 41, is now a medical consultant and gives doctors advice when they receive patients with rare diseases.

Doug Lindsay, of St Louis, Missouri, collapsed in fall 1999 when he was in his senior year of college. Pictured: Lindsay bedridden in his 20s 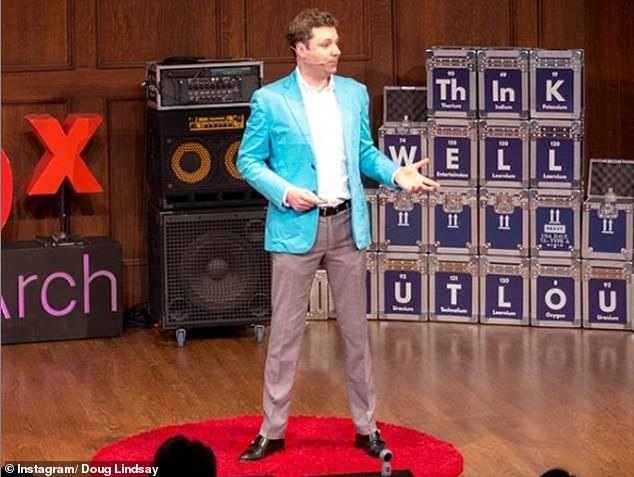 He became so weak and dizzy that he ended up bedridden for 11 years and had to drop out of college. Pictured: Lindsay telling his story at a TEDx event in St Louis

His mother struggled to pick him up past age one, and she was unable to walk by the time he was four years old.

He also said his aunt also became too weak to tie her own shoes.

When Lindsay collapsed after his first day of classes at Rockhurst University, a Jesuit college in Kansas City, the first call he made was to his mother.

‘When I called my mom that night to tell her I needed to drop out (of college), we both knew,’ he told CNN.

Lindsay spent 22 hours a day bedridden. He only got up to eat or use the bathroom.

He saw multiple doctors, including an endocrinologist, an internal medicine specialist, a neurologist – and was even referred to a psychiatrist, reported CNN.

However, no doctor could figure out what was, he read a passage in an endocrinology textbook that discussed how adrenal disorders can be similar to thyroid disorders.

The adrenal glands are small and triangular-shaped glans that sit above each kidney, which produce hormones to regulate the metabolism, blood pressure and other functions. 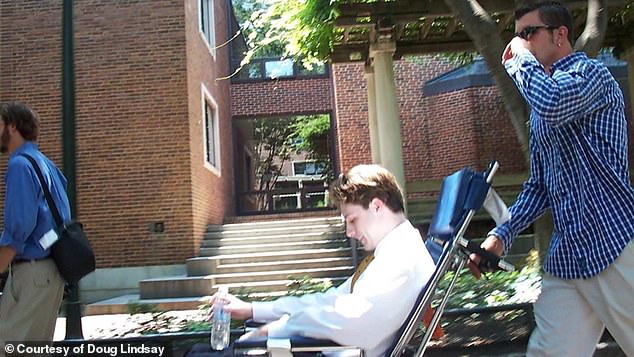 Lindsay teamed up with a medical professor and eventually discovered he had bilateral adrenal medullary hyperplasia. Pictured: Lindsay (in a wheelchair) and his friend at the University of Pennsylvania for a 2002 meeting of the Society for Amateur Scientists 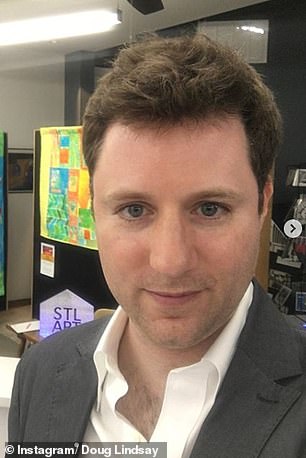 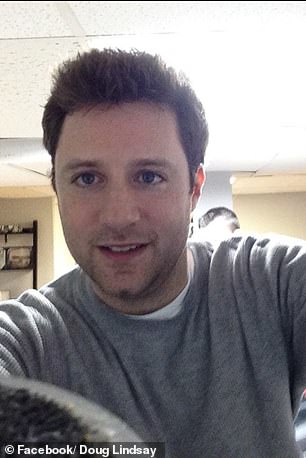 This occurs when the medullas, in the center of the adrenal glands which produce hormones, become enlarged and secrete too much adrenaline. However, no procedure existed for humans which could cure Lindsay (left and right)

In a front of a crowd in his wheelchair, Lindsay told specialists that he believed he had a disease so rare it wasn’t in textbooks.

The adrenal glands are small, triangular-shaped glands. One sits above each kidney.

They produce hormones that help regulate the immune system, metabolism, blood pressure and other functions.

The adrenal medulla is in the center and produces adrenaline, known as the ‘stress hormones.’

When the medulla becomes enlarged, that’s when adrenal medullary hyperplasia.

Bilateral means it occurs in both adrenal glands.

The medulla acts like a tumor and presses on the adrenal glands, causing too much adrenaline to be secreted into the body.

It’s so rare that it’s unknown how many people have the condition.

Treatments include drugs that act as a counter to excess adrenaline or surgery.

The procedure, known as an adrenal medullectomy, removes the medullas and – in essence – ‘cures’ the patient.

Most didn’t believe, or disagreed with, him – but not Dr H Cecil Coghlan, a medical professor at the University of Alabama-Birmingham at the time.

Lindsay theorized his body was overproducing adrenaline – a hormone secreted by the adrenal glands, especially in conditions of stress.

He convinced Dr Coghlan to use an IV to pump him with a drug called Levophed, which negate the effects of too much adrenaline, reported CNN.

Lindsay spent 24/7 hooked up to the IV for six years and, although still bedridden, he was able to get up for longer periods than before.

Dr Coghlan believed Lindsay might have a tumor on the adrenal gland, but three separate scans showed he didn’t

But, in 2006, a fourth scan showed his adrenal glands ‘glowing brightly,’ according to CNN.

This occurs when the adrenal medulla, which sits at the center of the gland and secretes hormones, become too big. They push on the gland, like a tumor, forcing excess adrenaline to secrete into the body.

Lindsay only found 32 cases recorded at the time but theorized that if surgeons could cut out the medullas, he might regain his mobility. 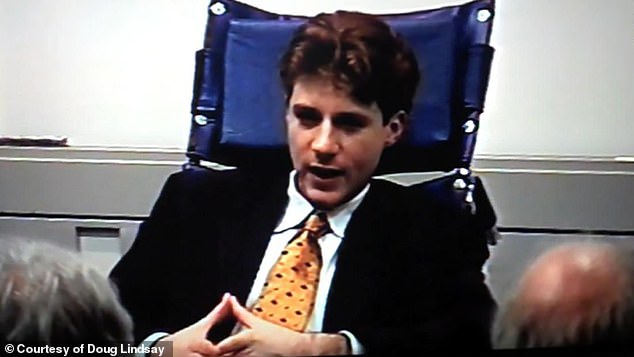 After reading similar procedures which had been performed on animals, Lindsay invented a surgery in which the medullas would be cut of each gland. Pictured: Lindsay speaking at a research conference in 2002 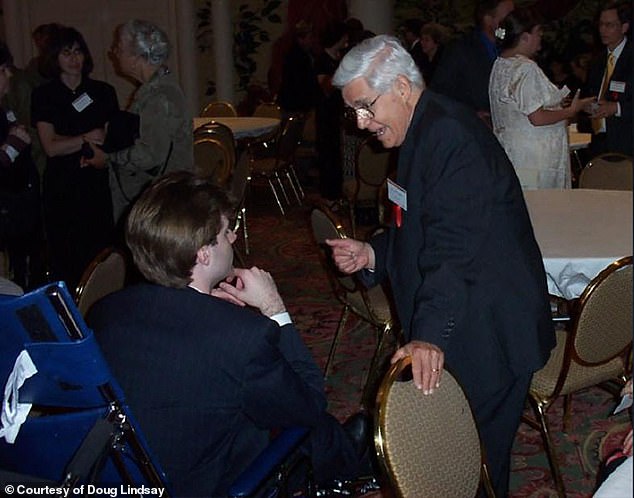 He had the first surgery performed in September 2010 and the second in 2012. Pictured: Lindsay speaking with Dr H Cecil Coghlan, whom he worked with for years, in 2002

But there was no such surgery that existed at the time, so Lindsay decided to invent one.

In 2008, he found a 1980 study from Georgia State University, which had removed the medullas from the adrenal glands in rats, reported CNN.

Lindsay found other cases of the procedure being performed on cats and dogs.

He created a PDF file of the surgery, the first human adrenal medullectomy, and began to pitch it to surgeons. 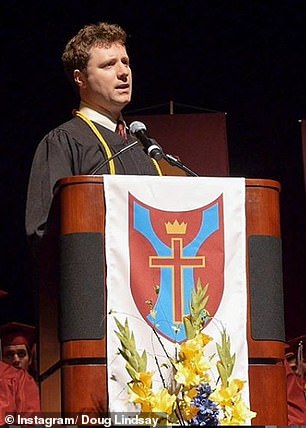 Lindsay, 41, is now a medical consultant and travels around the country speaking to medical schools and conferences. Pictured: Lindsay giving a commencement speech at his alma mater, De Smet Jesuit High School in St Louis

After 18 months, a surgeon from the University of Alabama-Birmingham agreed and performed the procedure on one of Lindsay’s adrenal glands in September 2010.

According to CNN, within three months, Lindsay had enough strength to walk one mile – something he hadn’t done in 11 years.

In 2012, he underwent surgery again at Washington University in St Louis to remove the other medulla.

The following year, he felt strong enough to fly on vacation with his friends to the Bahamas, his first time leaving the US.

Unfortunately, Lindsay’s mother condition was too fragile for her to have the same surgery and she passed away in 2016.

Lindsay graduated that same year from Rockhurst University with a bachelor’s degree in biology.

Today, he takes nine medications and he doesn’t have a huge amount of physical endurance – but he’s begun a new career as a medical consultant and professional speaker.

He speaks at medical schools and conferences, and even gives commencement speeches.

‘I got help from people, and now I have to help people,’ Lindsay told CNN.