Missouri woman, 82, who survived polio one of last to be using decades old iron lung machine a

Six nights a week for the last 36 years, Mona Randolph has been put in decades-old machine that helps her breathe.

The 82-year-old’s head sticks out on one side as her body sits in an airtight chamber where a motorized lever creates negative pressure and forces her lungs to expand.

The contraption is known as an iron lung machine and Randolph, of Kansas City, Missouri, is only one of three people in the US to have survived polio that still uses it.

But the devices are no longer covered by insurance companies or serviced by manufacturers, which means that the owners like Randolph are completely responsible for their maintenance, she said in an interview with the Kansas City Star.

Mona Randolph, 82 (pictured), of Kansas City, Missouri, is one of three known polio survivors in the US who still uses an iron lung. Pictured: Randolph using a CPAP to breathe during the day 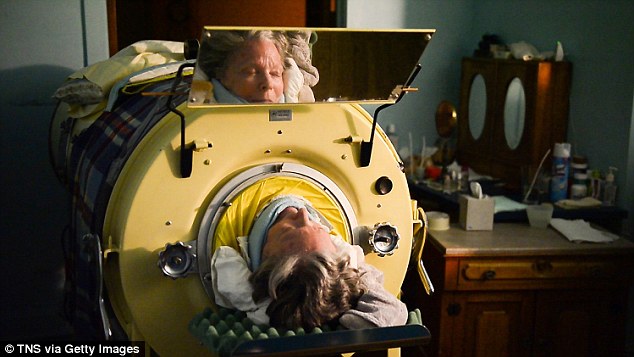 Randolph came down with polio in 1956 when she was just 20 years old. The disease paralyzed her, but she was able to get away without using a respirator for years. Pictured: Randolph sits inside the iron lung

Randolph told the newspaper that she contracted polio when she was age 20 and that the first sign was an intense headache as she was waiting for a bus to go home.

The headache turned into an extreme sensitivity to light and sound.

‘Everything was off-key,’ she said.

On the third day after her headache began, she couldn’t breathe and she was taken to St Luke’s Hospital in Kansas City, where she was diagnosed with polio.

Polio, short for poliomyelitis, is a viral infection that is highly contagious and spread through person-to-person contact.

About one in four people infected the virus have flu-like symptoms including a headache, sore throat, fever and nausea, according to the CDC.

In most cases, the symptoms will last between two to five days before disappearing.

However, polio can result in serious conditions including meningitis – an inflammation of the membranes covering the brain and spinal cord – and paralysis.

The CDC says that anywhere between two and 10 out of 100 people who become paralyzed from polio die when their breathing muscles also become immobilized.

A SHORT HISTORY OF THE IRON LUNG

An iron lung is a non-invasive negative-pressure ventilator, used to artificially maintain respiration during an acute polio infection.

They were first used in the 1920s and work by producing pressure on the lungs that causes them to expand and contract so that patients can breathe.

In most cases it would only be used for one or two weeks, until the patient could breathe independently, but some polio survivors with permanent respiratory paralysis rely on them daily.

They are now all but obsolete, replaced by positive-pressure ventilators such as modern day respirators.

Randolph’s diagnosis was in 1956, just a year after the US government had approved the polio vaccine.

However, it was widely marketed as being for children. Adults like Randolph were not considered to be at risk, the Star reported.

According to the National Institute of Neurological Disorders and Stroke, around 35,000 people were stricken with polio every year between the late 1940s and early 1950s.

But after the nationwide campaign to get children immunized began, the numbers began falling drastically and, in 1979, polio was declared to be eradicated in the US.

At St Luke’s Hospital, an iron lung sat in the basement, which had already fallen out of use at the time, and staffers brought it up and put Randolph inside.

The respirators were created in 1927 by two scientists at Harvard University.

The machine has a motor and a pump that changes pressure inside the airtight chamber, which forces the lungs to expand and contract.

The iron lung was meant to be used until a person could regain the ability to breathe, about one to two weeks after infection. But some people, whose breathing muscles had become paralyzed, permanently relied on them.

Randolph was in the machine for three months and it took her eight months after she first fell ill to become well enough to sleep without a breathing machine, reported KSHB.

Currently, Randolph is unable to move her left arm and has limited movement in her right arm, but she was able to get by without the iron lung for years.

But, in the 1980s, she began to suffer from post-polio syndrome, which affects polio survivors years after their recovery. 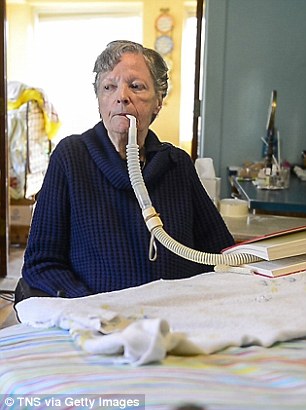 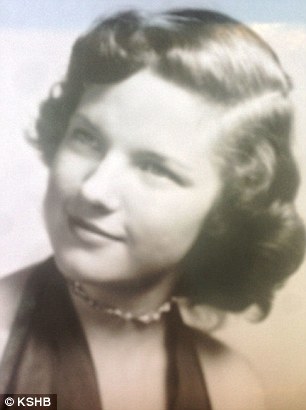 In the 1980s, she contracted post-polio syndrome, which affects polio survivors years after their recovery and she began having trouble breathing. This forced her to use the iron lung at night. Pictured: Randolph, left, in 2018, and right, in the 1950s 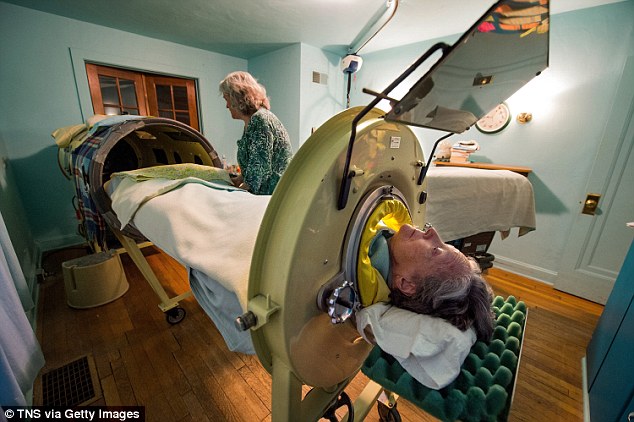 It takes about an hour as a sling transfers Randolph from her bed to the 700-pound behemoth. Randolph’s head and neck are adjusted and blankets are placed over her so she doesn’t get too cold. Pictured: Randolph getting ready to be put into the iron lung machine

They begin suffering from muscular weakness and fatigue, pain as their joints deteriorate and being unable to breathe or swallow properly.

Randolph was forced to use the iron lung at night, and is currently one of three known people in the US still using the machine.

During the day, Randolph uses a CPAP machine, which increases air pressure in the throat so that the airway does not collapse when you inhale, according to Kaiser Permanente.

But at night, Randolph’s husband Mark, and one of her good friends, put her into the six-foot-long tube which Randolph calls her ‘yellow submarine’, the Star reported.

It takes about an hour as a sling transfers Randolph from her bed to the 700-pound behemoth.

Randolph’s head and neck are adjusted and blankets are placed over her so she doesn’t get too cold.

The couple lives in constant fear that of maintaining machine’s condition.

The company that made the machines, JH Emerson, stopped doing so in 1970 and insurance companies do not cover the mainly obsolete machines.

After a series of mergers, medical supply company Respironics inherited responsibility of the machines.

In 2004, Respironics gave iron lung users three choices: choose another ventilator device, keep using the iron lung with the knowledge that Respironics may not be able to repair it, or accept full ownership and responsibility, reported Gizmodo.

The news outlet reported that if the machine breaks down, Mark, a software engineer, or Randolph’s cousin who is former aircraft mechanic repair it.

Mark told Gizmodo that the cost of keeping the machine working is equivalent to buying a new car every year. 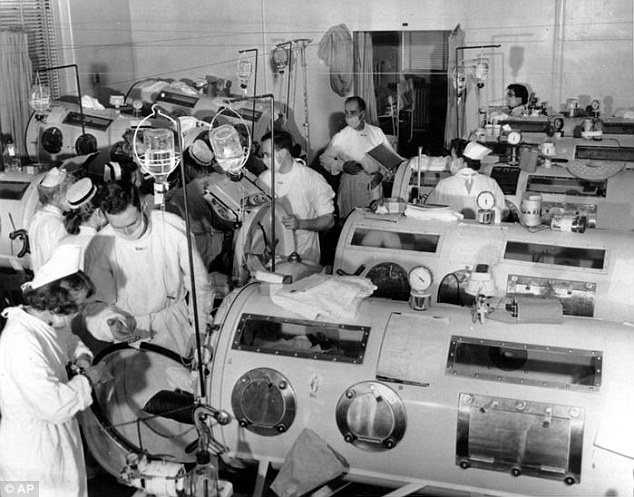 The respirators were created in 1927 by two scientists at Harvard University. The machine has a motor and a pump that changes pressure inside the airtight chamber, which forces the lungs to expand and contract. Pictured: An emergency polio ward at Haynes Memorial Hospital in Boston, Massachusetts, in August 1955 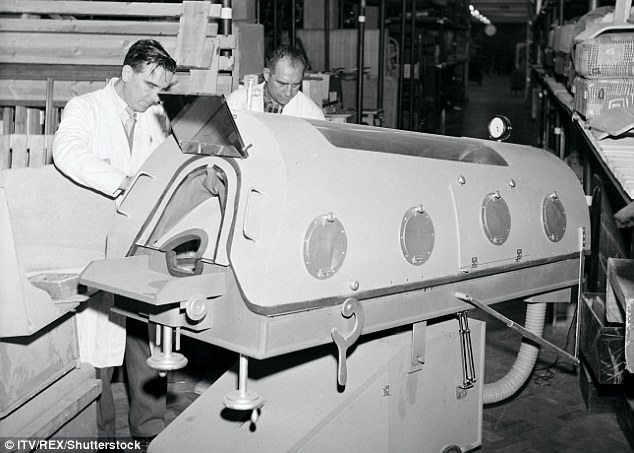 Manufacturer JH Emerson stopped making the machines in 1970 and insurance companies do not cover the mainly obsolete machines. Most people use more modern aids today

Brian Tiburzi, the executive director of Post-Polio Health International (PPHI), told Daily Mail Online last year that there is a bit of reluctance from iron lung users to let go of the machine.

‘Part of it is just habit,’ he said when asked why they might be hesitant to use more modern breathing aids.

‘That’s sort of what they have been used to all their life. Some people also use them because they have trouble with the masks, some leak, some people get sores, or find them uncomfortable to wear.

‘The vast majority have switched.’

He also said that the announcement by Respironics in 2004 meant ‘they were sort of told they were on their own.’

Randolph said she is a big advocate of people undergoing vaccinations to prevent themselves from ending up in a situation similar to hers.

‘I believe getting vaccinated is the thing to do, but I also believe people ought to act according to their faiths,’ she said.

‘It’s a personal decision. But something like vaccinations that you can see the proof of with epidemics just seems more logical.’