Misty Copeland has defended herself after failing to perform Swan Lake’s 32 legendary fouette turns, owning up to the mishap by insisting she will ‘forever be a work in progress’.

The ballerina, 35, danced the part of Odile in Pyotr Ilyich Tchaikovsky’s ballet earlier this month in Singapore. Swan Lake includes a sequence during which Odile completes 32 fouette turns, with one of her legs never touching the ground and propelling the dancer as she spins around on pointe.

When time came for Misty to complete the 32 turns, she did 12, before performing an alternative choreography to fill up the allotted time.

Speaking out: Misty Copeland has defended herself after failing to perform Swan Lake’s 32 legendary fouette turns. She is pictured as Odile in an archive photo 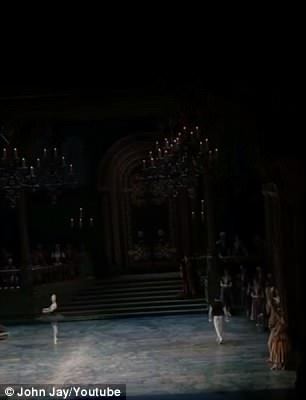 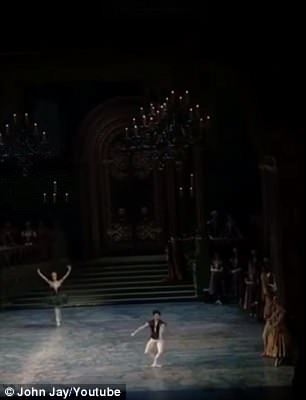 Moves: When time came for Misty to complete the 32 turns, she did 12, before performing an alternative choreography to fill up the allotted time. Misty is pictured in a YouTube video of the moment

Swan Lake’s 32 fouettes are considered to be one of the hardest, most challenging sequences in ballet.

‘If something goes wrong, the audience will see.’

Some of the most famous ballerinas in history, including Anna Pavlova, chose to perform alternative moves in order to avoid the dreaded choreography, much like Misty did when performing in Singapore.

While the moves Misty performed in lieu of the expected 32 fouettes remained graceful and might have be undetectable by untrained eyes, some viewers blasted her performance after someone posted a video of the moment on YouTube.

‘Her inability to execute the choreography reflects very poorly on the company,’ one person wrote in reference to the American Ballet Theatre, for which Misty is a principal dancer.

Another person branded the incident ‘terrible and embarrassing’, while one viewer called it ‘a disgrace’. 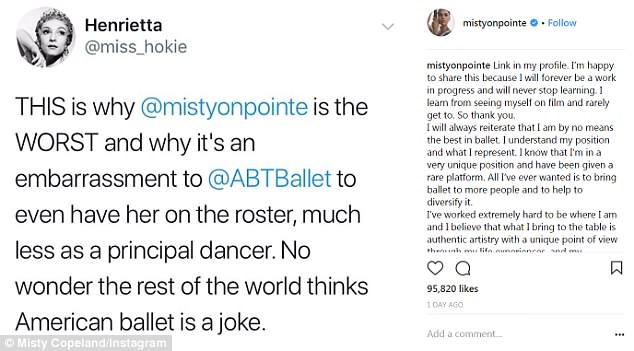 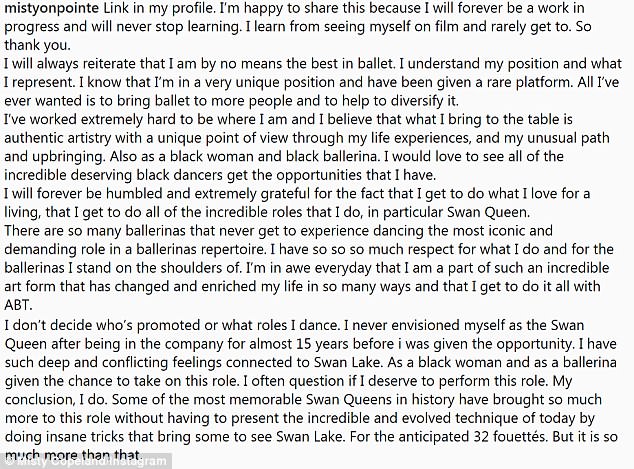 Statement: Misty shared a post on Instagram explaining that she doesn’t think she is ‘the best in ballet’ and remains ‘a work in progress’. She also added the link to the YouTube video of the moment to her profile 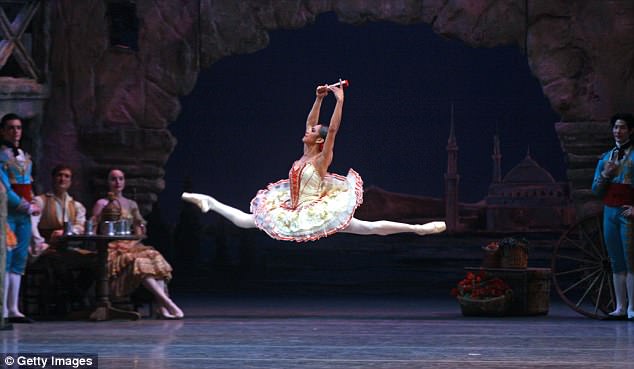 Elite: The ballerina (pictured in Don Quixote last year) is a principal dancer at the American Ballet Theatre

However, several people said they couldn’t pinpoint the mishap, and thought the performance was admirable regardless of whether Misty performed the 32 fouettes or not.

‘To the naked, untrained eye this looks magnificent, I’m not even sure what the issue is. Maybe people should stop being so hyper critical,’ one viewer wrote. ‘Keep dancing beautifully!’

Another person added: ‘Just because she’s one of the best in the business does not mean that she has to be perfect. Everybody makes mistakes, and I think to see someone as influential as Misty Copeland slip up is actually beautiful. Imperfection is beautiful.’

As for Misty herself, she took to Instagram to acknowledge what happened, and posted a screenshot of an incendiary tweet along with her response.

The tweet she screen-grabbed states: ‘THIS is why @mistyonpointe is the WORST and why it’s an embarrassment to @ABTBallet to even have her on the roster, much less as a principal dancer. No wonder the rest of the world thinks American ballet is a joke.’

Misty posted the same screenshot of the tweet twice, each time attaching a different statement and pointing out she had posted the link to the YouTube video of the moment in her Instagram profile.

The link still appears at the top of her page, and Misty made it clear she is not embarrassed to spread the word about her 12 fouettes.

‘I’m happy to share this because I will forever be a work in progress and will never stop learning. I learn from seeing myself on film and rarely get to. So thank you,’ she wrote.

‘I will always reiterate that I am by no means the best in ballet. I understand my position and what I represent. I know that I’m in a very unique position and have been given a rare platform. All I’ve ever wanted is to bring ballet to more people and to help to diversify it.

‘I’ve worked extremely hard to be where I am and I believe that what I bring to the table is authentic artistry with a unique point of view through my life experiences, and my unusual path and upbringing. Also as a black woman and black ballerina. I would love to see all of the incredible deserving black dancers get the opportunities that I have.’ 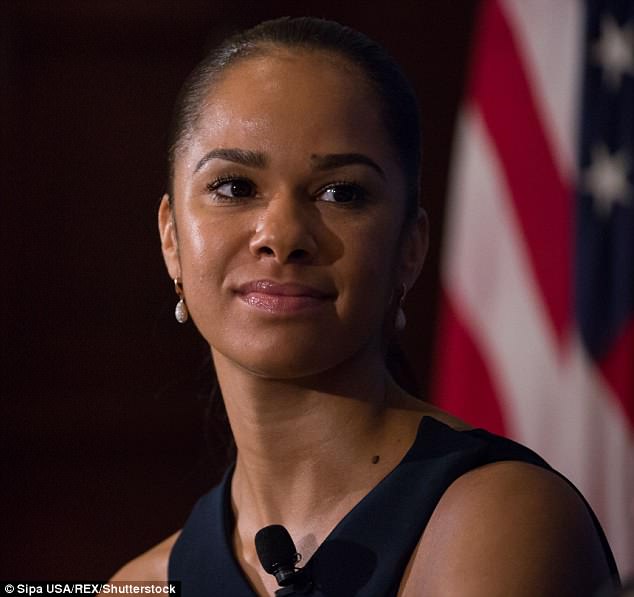 Opening up: ‘I’ve worked extremely hard to be where I am and I believe that what I bring to the table is authentic artistry with a unique point of view,’ Misty wrote

Artistry: In her second Instagram post, Misty emphasized the artistic component of ballet, as opposed to pure technique

Message: Misty also shared a similar comment below the YouTube video of her performance. It has since received more than 300 upvotes

Misty said she will always remained ‘humbled and extremely grateful’ for getting to dance for a living and dance ‘incredible roles’, such as that of the Swan Queen.

‘There are so many ballerinas that never get to experience dancing the most iconic and demanding role in a ballerinas repertoire,’ she added.

‘I have so so so much respect for what I do and for the ballerinas I stand on the shoulders of. I’m in awe every day that I am a part of such an incredible art form that has changed and enriched my life in so many ways and that I get to do it all with ABT.

‘I don’t decide who’s promoted or what roles I dance. I never envisioned myself as the Swan Queen after being in the company for almost 15 years before i was given the opportunity. I have such deep and conflicting feelings connected to Swan Lake. As a black woman and as a ballerina given the chance to take on this role. I often question if I deserve to perform this role. My conclusion, I do. Some of the most memorable Swan Queens in history have brought so much more to this role without having to present the incredible and evolved technique of today by doing insane tricks that bring some to see Swan Lake. For the anticipated 32 fouettes. But it is so much more than that.’

A ballerina’s career is not, nor should be defined by how many fouettes she executes

In her second Instagram post, Misty emphasized the artistic component of ballet, as opposed to pure technique.

‘People come to see ballet for the escape. For the experience of being moved through our movement and artistry, not to score us on the technicality of what we do. This is why ballet is not a sport,’ she wrote.

‘A ballerina’s career is not, nor should be defined by how many fouettes she executes.

‘They are a part of the choreography to tell a story of pulling off the entrancement she holds over prince Siegfried. The point is to finish the 3rd act with a whirlwind movement that sucks him in just one last time before it’s revealed that Odile is not Odette.

‘This is the incredible beauty of ballet. To move people.

‘I’m happy to have this dialogue because it’s something I believe in wholeheartedly. The history of ballet and it’s origin of pure freedom and expression is what we need to hold onto. Not to come into the theater as a critic armed with judgement.

‘I do appreciate the changes in the ballet technique, focused on evolving our technical abilities, but the point is to move people and for them to understand the stories we tell through dance. And that is an incredible responsibility and opportunity I will never take for granted.’

Misty also shared a similar comment below the YouTube video of her performance. It has since received more than 300 upvotes.

This is not the first time Misty has modified the choreography to perform this very passage of Swan Lake.

In April 2015, a report by Bachtrack stated that she ‘completed about half of the whipping turns then transitioned seamlessly to a series of very fast single pirouettes’, a choice deemed ‘intelligent’ because it is ‘perfectly in keeping with the character’.