Mixology expert: Which ice to use in different cocktails

If your local watering hole tosses a few ice cubes into every drink, you may want to find a new favorite spot.

The uninitiated might think that all ice is the same, but when it comes to cooling drinks for the best taste, temperature, and longevity, there’s no one-size-fits-all formula.

Freddie Sarkis, co-owner of New York City’s drinks event space Liquor Lab, has broken down the best types of ice to use for some of the most popular cocktails — and explained just why it’s important to pick the right one.

Get ready to drink! Guests who take a class at Liquor Lab in New York City can learn how to make the proper kinds of ice for different cocktails — but Daily Mail Online has a crash course 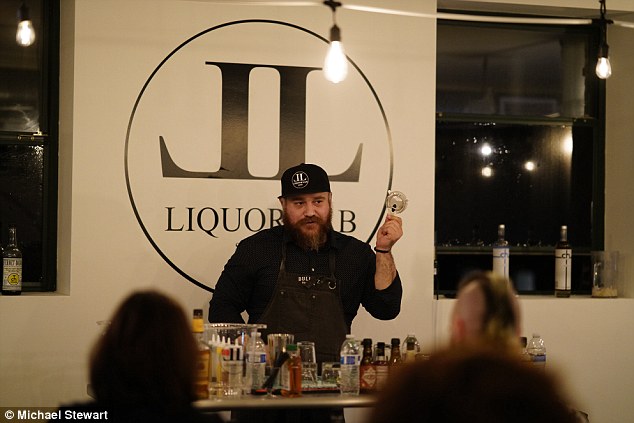 The expert: Freddie Sarkis, co-owner of the interactive event space, explained why certain cocktails are best served with specific types of ice

It’s true that literally any ice shape will get your drink cold. But while some will bring out the best in what you’re drinking, others can water it down too fast or diminish how enjoyable it is.

Think about cooling your cocktails the way you do about cooking your food, Sarkis explains.

‘Ice is to drinks as fire is to food,’ he tells Daily Mail Online. ‘The method you use to cook food matters. If you boil a steak, you’re still adding heat to it, but you’re not getting the char texture you want on the outside.

Of course, choosing ice that looks good in the glass adds that aesthetically-pleasing factor, too — but even more importantly, it controls how fast your drink cools, how long it stays cool for, how diluted it gets, and the overall taste. 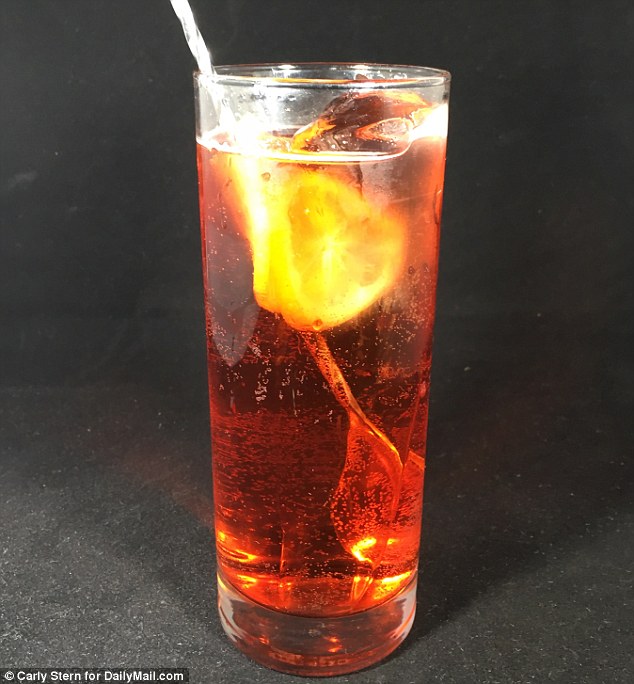 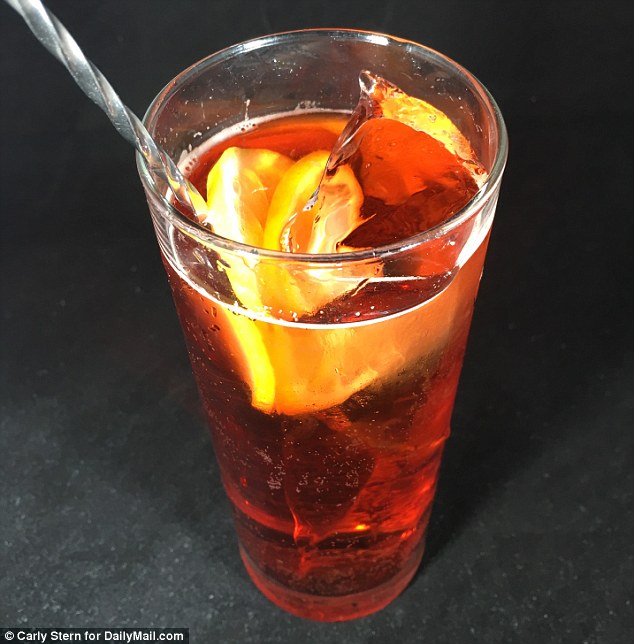 Smart: The spear doesn’t have a lot of surface area, which means it will take longer to melt — and stop your drink from being diluted too quickly by water

Many drinks served in a Collins or highball-style glass — that is, long drinks, which are usually a bit bigger and made with more mixer — work best with ice shaped into a long spear that spans the length of the glass.

‘Bigger pieces of ice give you more control over the temperature and flavor,’ Sarkis explains.

‘With one long, large piece of ice, there’s less overall surface area. Less surface area on the ice in your cocktail means it will dilute less, which means you have more control over the temperature as well as the flavor profile.’

So while smaller pieces of ice melt faster, bigger ice has fewer points of contact with the liquid — so it will take much longer for your drink to turn into a puddle of water. 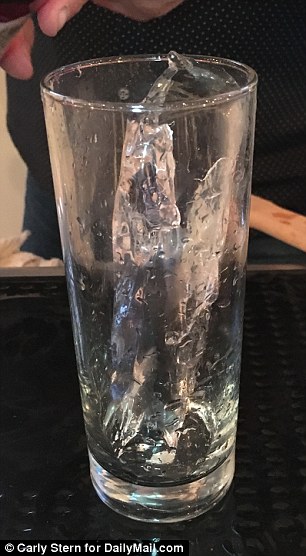 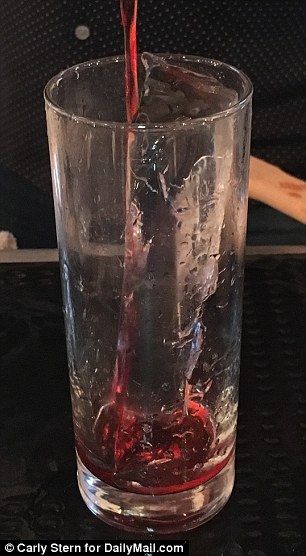 DIY: Spears can be carved at home from blocks of ice, or else made using a spear-shaped mold 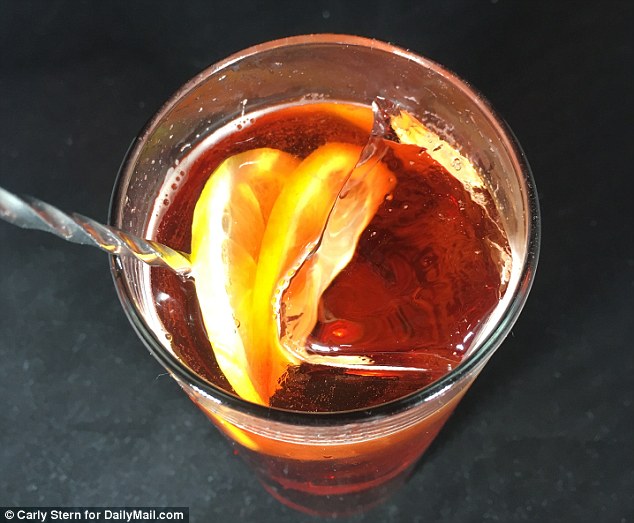 Tricks of the trade! Drinks served in tall glasses are usually made with a fair amount of mixer, so you don’t want to use faster-melting cubes of ice that will dilute it even more

That’s especially important for these types of cocktails, which have more mixer per volume. The alcohol is already diluted by juice or soda — you don’t want to dilute it too much with water.

While that’s all well and good for going to a nice bar, there’s also a way to make drinks this way at home.

In your kitchen, Serkis says your can either carve a spear from a big block of ice (which can be bought or made in a tray, then chopped up with anything in the kitchen that works), or you can simply buy a spear-shaped ice mold.

And why are those drinks served in tall, skinny glasses at all? That’s science, too: Cocktails with carbonation (think scotch and soda or rum and coke) will take longer to go flat when the liquid makes less contact with the air. 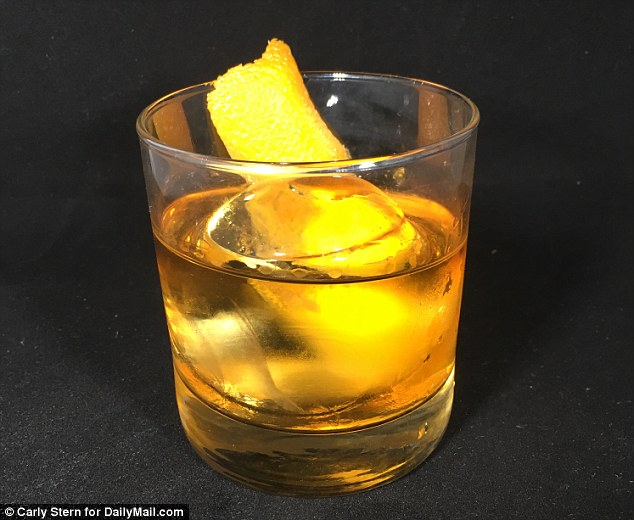 Round ‘n round! Drinks served in rocks glasses, like an Old Fashioned (pictured) are better with a sphere of ice 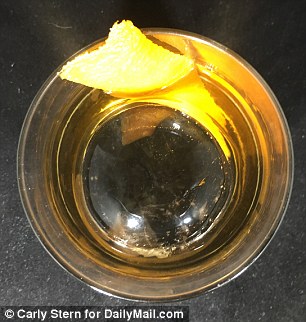 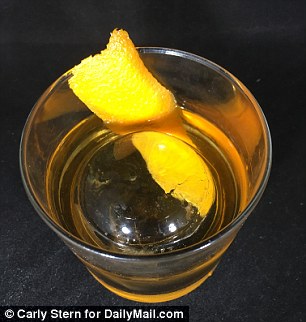 Control it: Spheres also have minimal surface area, so they will melt slowly and not dilute your drink quickly 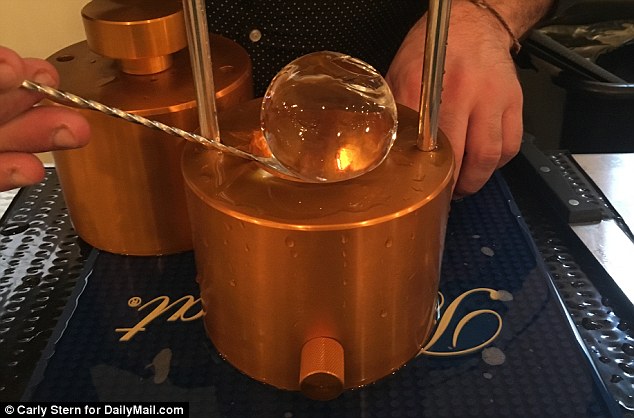 Fancy: Serkis makes his spheres of ice in a special machine, but they can be made at home using a round ice mold 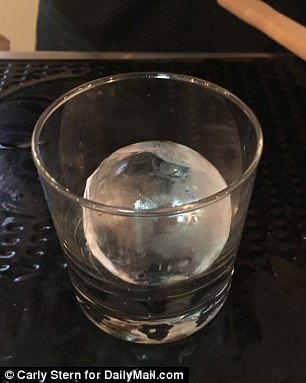 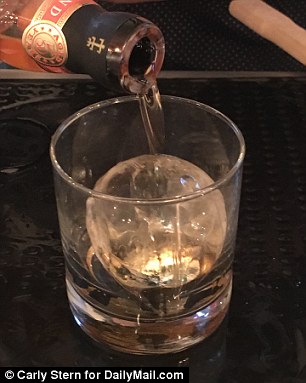 Prep work: Temper the sphere first by putting it out at room temperature, so it doesn’t crack when you pour liquid on it 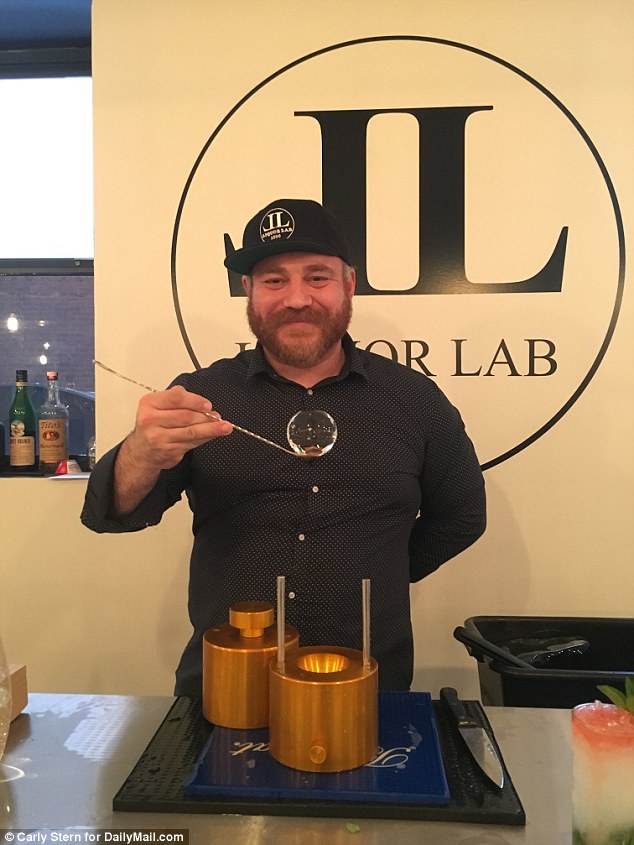 Don’t worry: ‘If you don’t have an ice sphere, your drink isn’t ruined,’ Serkis said — it’s just better if it’s made right

USE IN: OLD-FASHIONED, WHISKEY, NEGRONI

Spheres of ice are your go-to for drinks served in short tumblers (or rocks glasses or lowball glasses) for the same reason a spear goes in a highball glass: ‘The sphere dilutes very, very slowly,’ says Serkis.

Because the glass itself is shorter and wider, a spear won’t work here — but a sphere will fit just fine, and has minimal surface area. Again, this means you have more control over the temperature, and water won’t dilute your drink quite as quickly as cubes would.

If you’re making a drink with an ice sphere at home, use an ice mold to get that perfect shape. Then let the sphere sit out at room temperature for a bit to temper it, so it won’t crack when you stick it in liquid.

At the end of the day, though, Serkis says using the ‘wrong’ ice isn’t a disaster: ‘If you don’t have an ice sphere, your drink isn’t ruined.’ 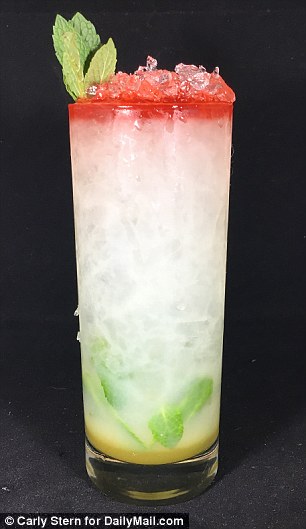 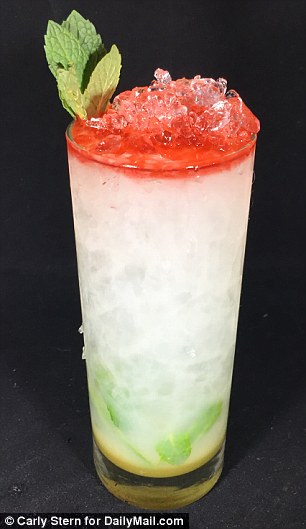 Crushin’ in! Mint juleps and swizzles (pictured) should be made with crushed ice 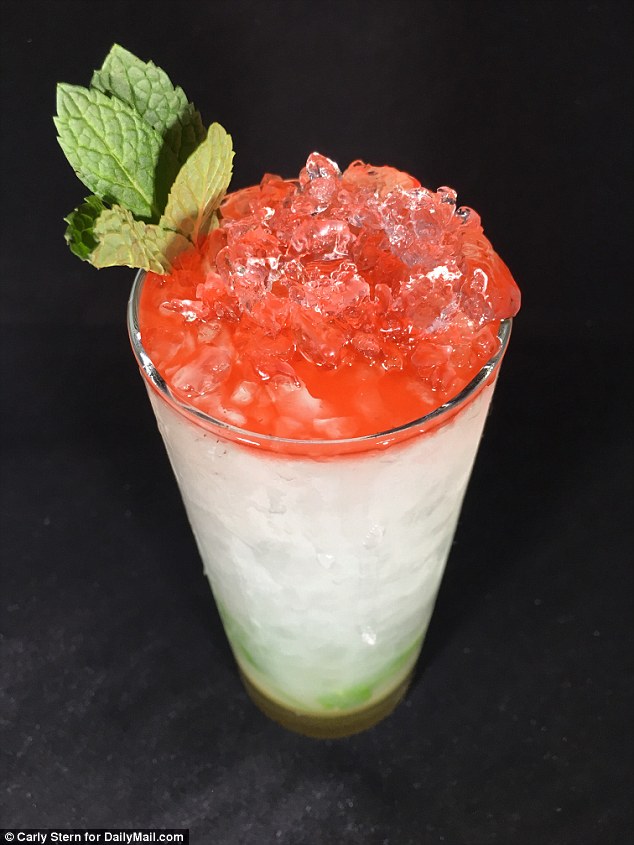 Check it out: After the first bit of dilution, the drink will get so cold that the ice will nearly stop melting — and the outside of your glass will frost 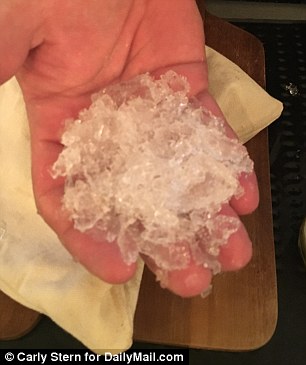 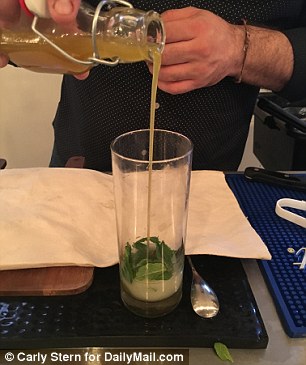 How to make it: Ice can be crushed in a machine, but you can also smash it inside of an absorbent piece of cloth

USE IN: MINT JULEP, SWIZZLE

A good mint julep or swizzle is always made with crushed ice, which keeps it extra-cold when it’s hot outside.

Crushing the ice maximizes the surface area, which chills the liquid up fast — so fast, in fact, that the drink becomes cold enough to slow down the melting of the ice.

‘Once the initial dilution is finished, this cocktail gets so cold that it frosts on the outside of the glass,’ Serkis says.

And you don’t need a special machine to make crushed ice at home, either. Simply put cubes in an absorbent bag or inside a folded towel and smash them. 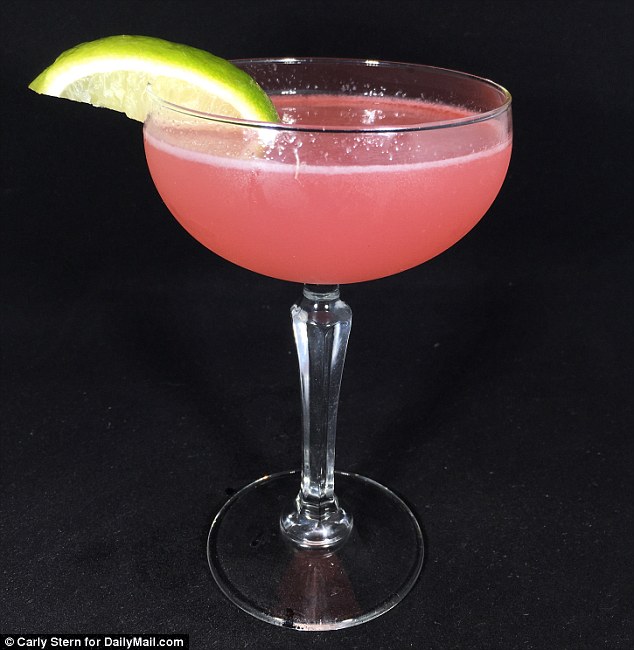 Shake it like a Polaroid picture! Martinis and Cosmopolitans don’t have ice in the glass — instead, they’re shaken with cubes before pouring 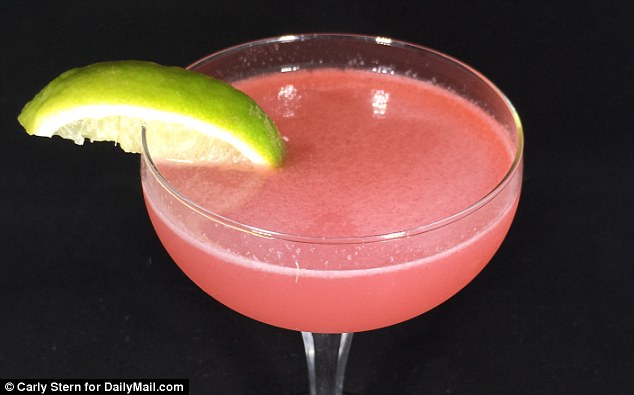 Genius! Because there is no ice to help maintain the temperature, they’re served in glasses with stems. This way, body heat doesn’t transfer when you hold it

USE IN: MARTINI, COSMOPOLITAN

You’ll never see a drink served in a martini glass with ice cubes, since that would be a recipe for sloshes and spills. But that drink still needs to be chilled somehow, which is where the shaking comes in.

It’s also why drinks like martinis, Cosmopolians, and even wine are served in glasses with stems — so there’s a place to put your hand that won’t transfer your body heat to your drink, which has no ice in it.

‘A martini is an exercise in temperature. You want to serve it as cold as possible, and when it hits the table, after a couple sips, it’ll warm up and become more aromatic,’ says Serkis.

‘But you don’t want to warm it too fast, which is why you hold it by the stem. So your body heat doesn’t warm it,’ he adds. ‘Same thing with wine. We serve wine at a specific temperature, and we don’t want body heat to affect it.’

If you’re shaking your own cocktail at home, it’s best to use bigger cubes in your shaker, which won’t dilute as fast. If you only have smaller ones, shake the drink less. 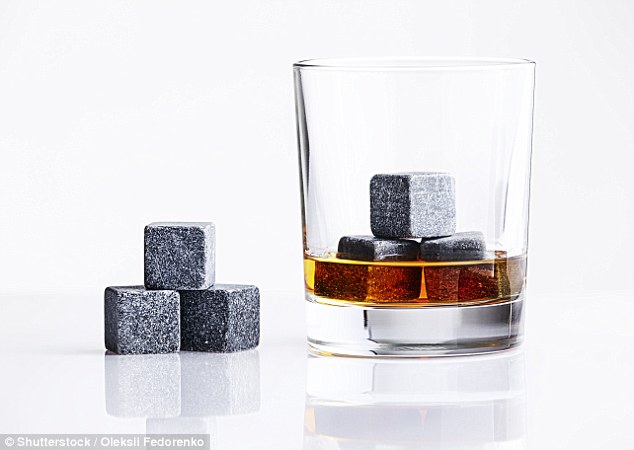 Stay away! Serkis says that whiskey stones are a bad idea since they don’t cool whiskey the right way — and the liquor actually should react with melting ice for the best taste

WHY WHISKEY STONES ARE ALWAYS A BAD IDEA

If you’re a whiskey drinker, think twice before buying into the whiskey stone trend.

‘A majority of the temperature change comes from dilution,’ he explains. ‘If you put room-temperature water in a freezer, it’ll take 15 to 20 minutes to be a cool.

‘People have this idea that they don’t want their booze watered down,’ he adds, ‘but the water is actually part of the taste. If you look closely at ice in whiskey, you can see tendrils coming off it.

‘That’s called “releasing the serpent” — it’s the water bonding with the oils in whiskey, and it changes the flavor.’

More tips: If you’re hosting a get-together, Serkis recommends making afresh tray of ice, since whatever is sitting in your freezer may have picked up a weird taste 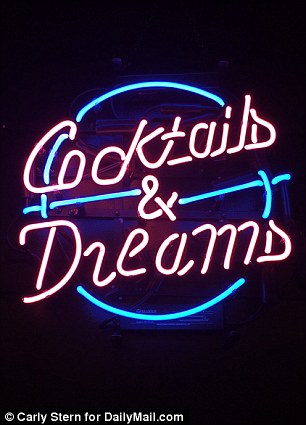 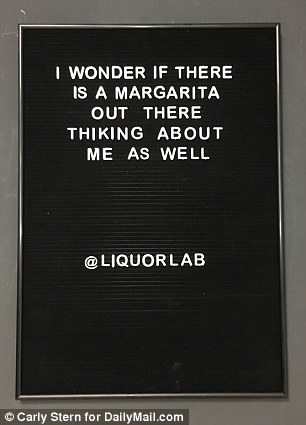 Serkis also suggests a few other tricks and tips for making better cocktails at home.

For one, truly creative hosts can play around with flavored ice, freezing ingredients in advance.

For example, you can freeze orange juice and grenadine into ice cubes to make a tequila sunrise that will get sweeter over time — or freeze jalapeno juice to use in a Bloody Mary that will get spicier the more you drink it.

Finally, if you’re hosting a get-together, he recommends always making a fresh batch of ice beforehand. Ice that’s been sitting in the freezer can pick up some of the tastes and smells of the food kept in there, which can spoil a drink.