MMA fighters taking part at the UFC 249 event in Florida could lose their purses and bonuses if they publicly criticize the fight promotion’s health and safety precautions for COVID-19, according to an event participation agreement.

With sporting events cancelled around the globe due to the novel coronavirus outbreak, the UFC is staging three cards in eight days in Jacksonville, Florida.

Before competing, fighters taking part in the UFC 249 event on May 9 were asked to sign an eight-page event participation agreement.

A non-disparagement clause in the undated agreement states that ‘the Participant will not suggest or communicate to any person or entity’ that the events ‘have been or will be held without appropriate health, safety or other precautions, whether relating to COVID-19 or otherwise.’

The agreement goes on to say that if a fighter does breach this clause, ‘the Company may revoke all or any part of any prize monies or awards won … including, but not limited to, purses, win bonuses, other fight-related bonuses and event-based merchandise royalties.’

It comes as a top epidemiologist has slammed president Dana White for not following proper safety protocols after Ronaldo ‘Jacare’ Souza tested positive for COVID-19 following his arrival in Florida.

A planned middleweight bout between Souza and Uriah Hall on Saturday was called off. Assistant professor of Quantitative Theory & Methods at Emory University Zachary Binney wrote on Twitter: ‘The @UFC and @danawhite were negligent. Tried to restart early, the predictable thing happened, & they mishandled it.’ 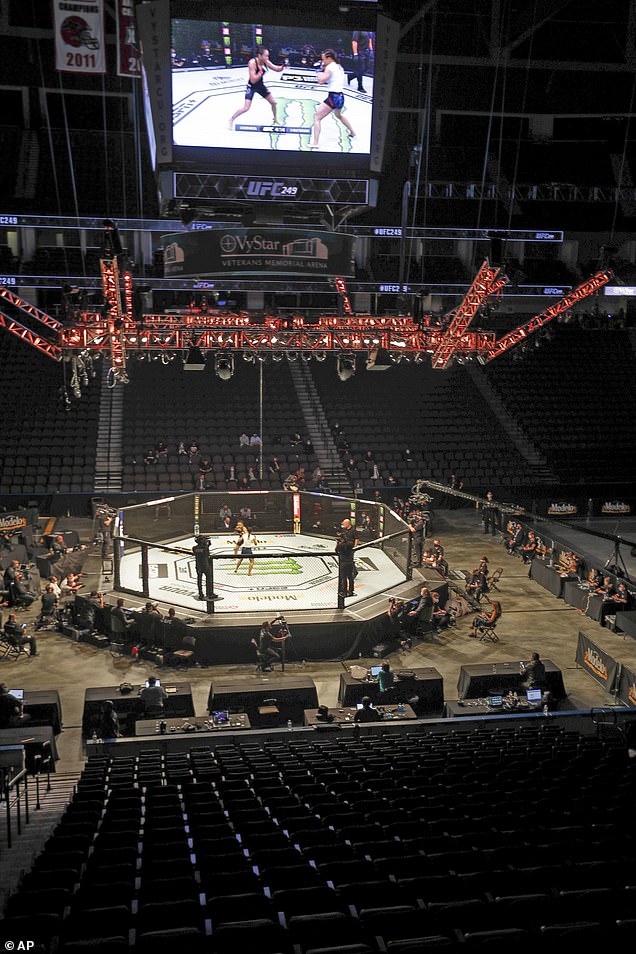 Though signed exclusively to the promotion, UFC fighters are independent contractors rather than employees, and purses and bonuses form a major part of the income of almost all of the fighters on the roster.

A UFC spokesperson declined to comment on the clause and the possibility of penalties being imposed on fighters, instead referring to comments Dana White gave to Yahoo in which the UFC president said that fighters would not be punished for airing their opinions about the health and safety arrangements.

‘If a fighter says something that isn’t true – if he says we didn’t test anyone for this – that would (violate the agreement). But if he said something that was true, his opinion, then that is different,’ White said.

In recent weeks, one fighter has expressed reservations about getting in the cage during the COVID-19 pandemic.

Heavyweight Greg Hardy, who suffers from asthma, said in a news conference on Thursday that he was ‘terrified’ of the virus, but he went on to compete on the UFC 249 card and scored a decision victory over Yorgan De Castro.

Atlanta-based epidemiologist Binney said: ‘If this was your system working as designed, your system is bogus.’

He had said he ‘jumped the gun here and was a bit harsh’ but later added: ‘Actually, the UFC’s own statement indicts the hell out of em!

‘I retract my retraction. The @ufc and @danawhite were utterly reckless with Souza and his cornermen. Read their own words.’

On Saturday evening Binney tweeted: ‘Honestly, they did better than I thought they would. They were so quiet about their plans initially I didn’t think they’d be testing, but they did.

‘Their cardinal sins (so far) were pushing too early, not having at-risk fighters test pre-travel, and not handling Souza right.’ 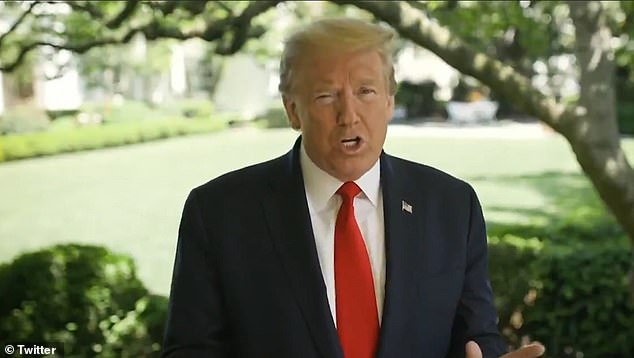 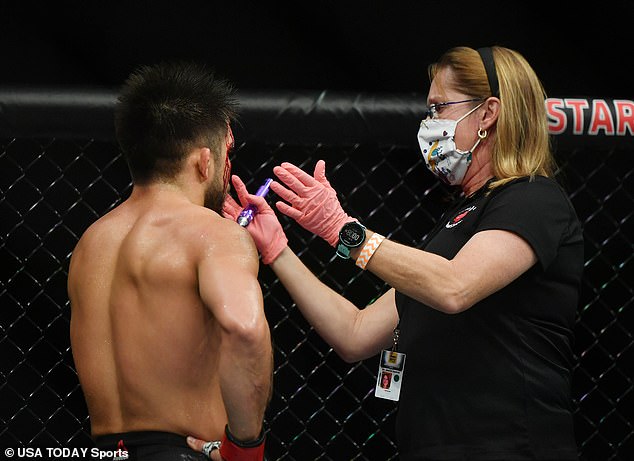 UFC 249 was held in an empty stadium in Jacksonville, Florida on Saturday night, and was aired on ESPN.

President Trump appeared partway through the broadcast in a taped message to tell the audience it was time to resume professional sports.

‘I want to congratulate [president] Dana White and the UFC. They’re going to have a big match!’ the Commander-in-chief excitedly stated.

‘We love it. We think it’s important – get the sports leagues back. Let’s play. We do the social distancing and whatever else you have to do, but we need sports. We want our sports back, and congratulations to Dana White and the UFC.’

Trump’s comments put him at odds with White House Coronavirus Task Force Doctor Anthony Facui who said last month that it would be ‘very difficult’ for sports to resume this year.

Saturday night’s UFC event overcame controversy and a huge number of logistical headaches to go ahead.

Only a handful of media, broadcast and production personnel were permitted to watch the action, along with the fighters, their teams and officials.

VyStar Veterans Memorial Arena – where the event took place –  is usually filled with roaring fans but on Saturday night there was eerie quiet.

As the first fights took place and supporters managed to quench their thirst for live sport through the live broadcast, it was a bizarrely different experience to usual.

Every strike and kick echoed and the shouted instructions from coaching teams were audible when they’d usually be drowned out.

The commentary team attempted to bring an enthusiasm to proceedings but there was still an inevitably flat feeling.

Fighters walked out to music, were announced by Bruce Buffer and given the final instructions by the referee and the UFC did everything to make the experience feel as close to their customary events as possible.

Everyone in the arena had been forced to go through extensive testing to gain access to the event and the UFC’s rigorous safety measures may well be mirrored by other sports as the lockdown measures ease in the months ahead.

As of Sunday morning, more than 1.3 million Americans have tested positive to COVID-19, and more than 79,000 have died. The country is struggling to flatten the curve and get the spread of the virus under control.

Among those fighting were Justin Gaethje who delivered the performance of his career to inflict a brutal beating on Tony Ferguson and set up a 21-minute showdown with Khabib Nurmagomedov for the lightweight title.

Francis Ngannou showed why he is the most feared powerhouse in the UFC with a 19-second knockout win to send shockwaves through the heavyweight division.

The Cameroon-born Frenchman stopped Jairzinho Rozenstruik in the opening stages of their three-round bout,  putting himself well and truly in the mix for another title shot now.

Ngannou stormed forwards straight from the opening bell, connected with a left hand and that was enough to fell the 32-year-old Surinamese.

Major League Baseball appears tentatively set to approve a plan that would call for an 80-game regular season beginning in early July, it has been reported.

The plan, which is subject to change and must be approved by team owners as well as the Major League Baseball Players Association, envisions a season where the schedule is regionalized and the playoffs are expanded to include a total of seven teams in each league.

MLB – like every other major North American professional sports league – has been shut down due to the COVID-19 pandemic.

A rough outline’ of MLB’s plan includes a regular season ranging anywhere from 78 to 82 games – about half of the traditional 162-game season.

During normal times, teams in each division would play each other while traveling across the United States and Canada.

But The Athletic is reporting that the plan for the truncated season calls for teams to only play those in the same region and division. 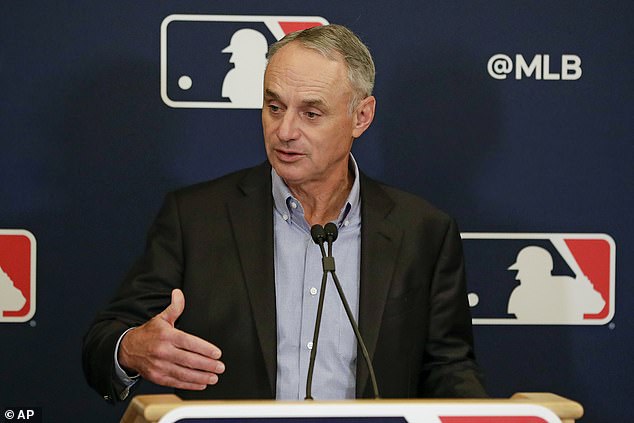 A tentative plan would have to be approved by players and team owners. Major League Baseball Commissioner Rob Manfred (seen above on February 6 in Orlando) is pictured.

If MLB does manage to play this season, it will in all likelihood be without any spectators.

Since fans in the stands make up a significant revenue stream, the players will in all likelihood be asked to take a salary reduction for this season only.

In March, the players agreed to prorate their salaries in a shortened season.

Those salaries cover the regular season. The postseason shares that the players receive are based on fan attendance at the ballparks.

With no fans coming to the stadiums this year, the players will be asked to agree to a set percentage of revenue.

The NFL has unveiled its 2020 schedule, with the season set to kick off in Kansas City on Thursday, September 10.

Defending Super Bowl champions Kansas City Chiefs will host the Houston Texans for the opener, which will be played at Arrowhead Stadium.

The NFL has scheduled a regular sixteen-game season, despite the unfolding coronavirus pandemic, with Super Bowl set to take place in Tampa, Florida on February 7, 2021.

However, the League’s commissioner, Roger Goodell, has warned that he is ‘prepared to make adjustments as necessary’ should the COVID-19 pandemic stretch into the later part of the year.

In anticipation of such changes, the NFL has also formulated a ticket refund plan.

A memo sent to all 32 teams by Goodell on Tuesday outlines a baseline for full refunds on any tickets purchased directly from the clubs. 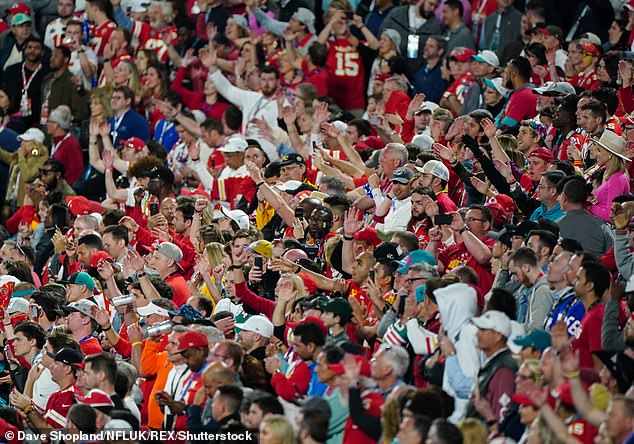 Fans are seen packed into Hard Rock Stadium for Super Bowl LIV back in February. Scenes such as these are unlikely in this

Meanwhile, The New York Times released a report Thursday claiming NFL teams are ‘preparing for games with fewer fans’ due to the coronavirus crisis.

The New York Jets will not not be selling single-game tickets due to the pandemic, claiming it is the most ‘prudent’ thing to do.

Elswhere, Miami Dolphins president Tom Garfinkel says Hard Rock Stadium may only be filled at 25 per cent of its capacity.

‘We would have times to come in for security at different gates so people would be separated out in terms of when they enter the stadium,’ he previously told Good Morning America.

‘We would exit the stadium much like a church environment, where each row exits so people aren’t filing out all at the same time in a herd.’