Treasury Secretary Steve Mnuchin walked back a claim on Monday that the ‘trade war’ with China is on hold.

He told CNBC that statement on ‘Fox News Sunday’ was a misspeak, and ‘It never was a trade war.’

‘What I would have really said is this has been a trade dispute all along,’ he said of the Trump administration’s bid to reduce its trade deficit with China by $200 billion.

After several days of meetings at the White House, Chinese negotiators promised the U.S. to open up trade in the agricultural and energy sectors.  China also agreed to address the United States’ intellectual property concerns.

‘Barriers and Tariffs to come down for first time,’ the president tweeted on Monday.

Treasury Secretary Steve Mnuchin walked back a claim on Monday that the ‘trade war’ with China is on hold. He said the statement on ‘Fox News Sunday’ was a misspeak, and ‘It never was a trade war’

After several days of meetings at the White House, Chinese negotiators promised the U.S. to open up trade in the agricultural sector

The president said in tweets that the ‘potential deal’ that the U.S hammered out with Beijing would be a bonanza for America farmers.

The president said in tweets that the ‘potential deal’ that the U.S hammered out with Beijing would be a bonanza for America farmers.

‘They will purchase from our Great American Farmers practically as much as our Farmers can produce,’ he said of the China.

Trump asserted that the prospective agreement with China includes ‘massive amounts of ADDITIONAL Farm/Agricultural Products’ and would be one of the best things to happen to our farmers in many years!’

The president’s trade representatives blitzed the business networks on Monday morning trying to tamp down expectations, however, for a potential deal.

‘What we agreed was a framework for going forward that had a number of elements to it. It had some specific thoughts on specific products which we’ll be trying to flush out and it covered lots of other things, the intellectual property, forced technology transfers, a whole gamut of things,’ Commerce Secretary Wilbur Ross said on Fox Business.

He added, ‘But it’s not a definitive agreement, it’s a framework.’

‘For the moment, it’s kind of at the 40,000-foot level. This is not a definitive agreement,’ he told the network. ‘This what we hope will be a path forward. If it doesn’t work, the tariffs will go into effect. So nothing’s been lost at all.’

Ross said that $150 billion in punishments that Trump had been threatening, in addition to worldwide steel and aluminum tariffs, were being halted for the timebeing.

‘Well, you can’t be tariffing people at the same exact time that you’re negotiating a detailed arrangement with them,’ he said. ‘Secretary Mnuchin said yesterday, there’s a hold on tariffs for the moment.’

‘But you cannot remove tariffs as a negotiating tool or an enforcement tool from this process. You cannot do that. And therefore, I don’t think we’re saying tariffs are over. Far from it,’ he said. 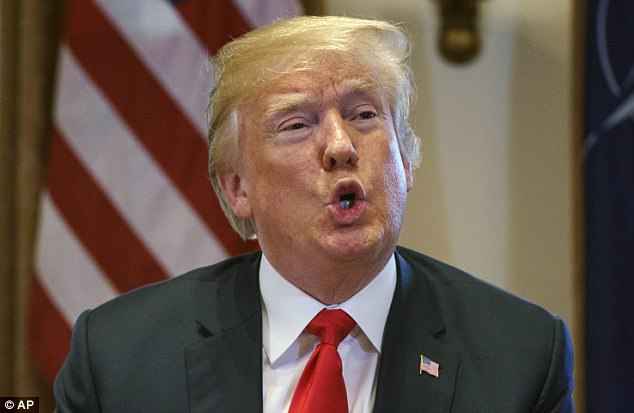 The president’s trade representatives blitzed the business networks on Monday morning trying to tamp down expectations, however, for a potential deal, while Trump was on Twitter talking up one

Mnuchin told reporters at the White House that it is in fact just a framework that Ross will have to have to turn into a formal between businesses.

‘This is not a government-to-government purchase order,’ Mnuchin admitted.

He said he expects 35 to 40 percent increases in the agricultural sector, though, in the near future.

In his interview on Sunday, Mnuchin said he expects to see a boost of $50 billion to $60 billion in the next three to five years in the energy sector.

A communique after the meetings in Washington concluded did not include specific dollar amounts, and Beijing said it did not commit to Trump’s $200 billion figure.

Kudlow said Sunday that both nations were using it ‘as a rough ballpark estimate’ despite Beijing’s rejection of the full figure.

Appearing on another network, Mnuchin said he could not ‘publicly disclose’ what the target numbers are. But he said that Trump was privy to the conversation and what Beijing agreed to,

‘He can always decide to put the tariffs back on if China doesn’t go through with their commitments,’ he said.

The trade ‘dispute’ with China began after Trump slapped $50 billion in tariffs on China over alleged intellectual property violations. China then outlined $50 billion in  tariffs against the U.S. prompting Trump to threaten another $100 billion in new taxes.

Trade representatives from both sides have since sat down in Beijing and Washington to discuss alternatives.

Trump joined the talks at the White House last week after saying on Twitter that he was considering a lesser penalty for a Chinese telecommunications company that violated U.S. sanctions at the request of Chinese President Xi Jingping.

As he came under assault for mixing personal and government interests – China had just provided a $500 million loan to a development project that will benefit his family business – Trump said that he made the pledge in the context of the possible trade deal with China.

However, Mnuchin directly contradicted Trump on Sunday as he said, ‘That was completely independent of our trade negotiations.’

‘We didn’t agree to any quid pro quo,’ he promised.