Mnuchin: Trump administration is ‘willing to spend whatever it takes’ to mitigate coronavirus crisis

Steven Mnuchin says actual unemployment rate could be closer to 25% – not the 14.7% reported by the Labor Department – and match jobless peak of the 1933 Great Depression

While Mnuchin says Trump is ‘willing to spend whatever it takes,’ they are cautious to spend more money before seeing how other packages affect the economy first.

‘We just want to make sure that before we jump again and spend another few trillion of taxpayers’ money that we do it carefully,’ Mnuchin told Fox News Sunday. ‘We had an emergency process. It worked quickly. We are there to help the American people.’

‘If we are going to be considerate and if we need to help the American people in every aspect of this, as I said before, we are willing to spend whatever it takes, but whatever it takes need to be done carefully,’ he continued. 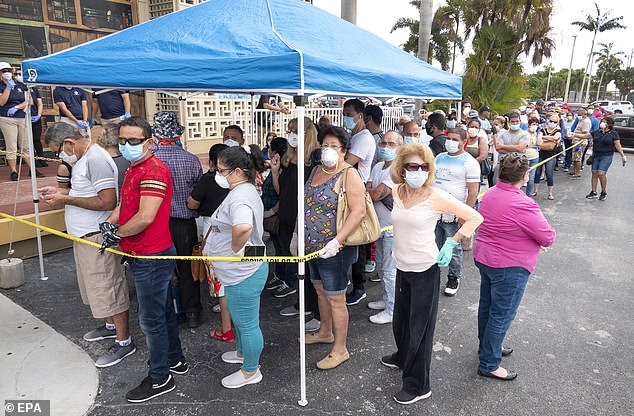 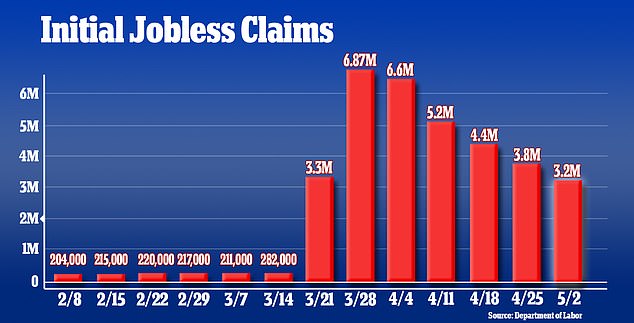 Mnuchin claims that the percentage of Americans unemployed – around 15 per cent, currently – could hit around 25 per cent

Since the start of the pandemic, Mnuchin, a former Democrat, has acted as the liaison between the White House and lawmakers drafting the legislation Congress.

Democrats are preparing to propose another several-trillion-dollar coronavirus relief package, and while Republicans appear to be widely on board, they are opposed to several stipulations and want to observe caution in pumping more money into the economy.

Trump is pushing for a payroll tax, which Democrats, and several Republicans, are against.

‘We are absolutely pushing for the payroll tax cut,’ Mnuchin asserted to Fox News host Chris Wallace. ‘It’s an incentive to get people back to work. It’s delivering money to the American public and to business. In a very effective way and that will be one of the components.’

Democrats, however, say relief for state and local governments are a must in the next relief bill, which they say could be upwards of $3 trillion– and also claim it needs to include more direct checks for Americans, relief for small businesses and bolstering federal food stamp programs.

‘The Democrats have been asking for more money for states,’ Mnuchin continued in his interview. ‘We’ve been very clear that we are not going to do things just to bailout states that were poorly managed, but we are going to look at all these issues and let me just emphasize, all these bills have had enormous bipartisan support.’

‘When we need to go back and work and help the American public, we will do this in a bipartisan way and make sure we get all of these things included,’ he said.

Of Americans who qualify to work, aged 16 and older, 14.7 per cent are now unemployed – coming off of a low of around 3 per cent unemployment before the coronavirus crisis hit.

Mnuchin revealed Sunday that he believes the unemployment level ‘could be’ close to 25 per cent as more than 33 million people applied for unemployment benefits in the last five weekly filing periods.

The next massive coronavirus relief bill is meant to be a ‘part two’ of the $2.2 trillion CARES Act signed by Trump at the end of March.

That bill included billions in grants for small businesses to keep their 500 employees or less on payroll and pay other expenses during the coronavirus crisis and $1,200 direct checks for most Americans earning less than $99,000.