Hawaii-born actress Auli’i Cravalho is encouraging Moana fans of all ages to dress up as the Polynesian princess for Halloween amid the ongoing debate about whether or not the costume is a form of cultural appropriation.

The 17-year-old star, who made her acting debut as the voice of Moana in the Disney animated film, voiced her opinion about the costume after years of controversy surrounding it.

‘I think it’s absolutely appropriate,’ she told People. ‘It’s done in the spirit of love and for Disney and for the little ones who just want to dress up as their favorite heroine, I’m all for it.’

Stance: Auli’i Cravalho, the Hawaii-born actress who is the voice of Moana in the Disney film, said it is ‘absolutely appropriate’ for kids to dress up as the Polynesian princess for Halloween 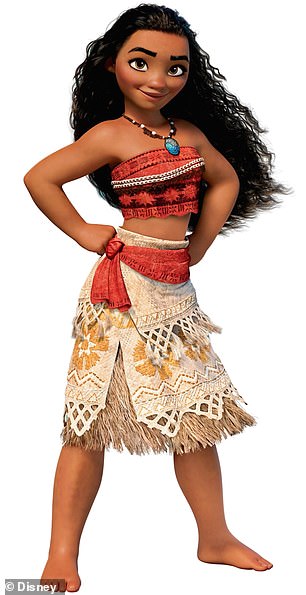 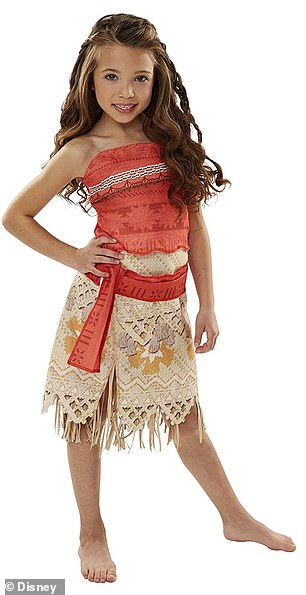 Questions: Since the animated film’s release in 2016, people have debated whether or not dressing up as Moana is cultural appropriation

Not only does Cravalho believe its okay for children to dress as their favorite Disney Princess, but she is also encouraging adults to get their own Moana costumes.

‘I would encourage anyone who wants to dress up as a wayfinder who journeys beyond her reef to figure out who she truly is, I totally support you. Go for it!’ she said. ‘Parents can dress up as Moana, too.’

Since the release of the film in 2016, concerned parents have questioned whether or not it is culturally appropriate for their children to dress as Moana or her sidekick Maui.

A few months before the movie hit the big screen, Disney pulled its Maui costume after it was deemed to be cultural appropriation.

Maui, voiced by Dwayne ‘The Rock’ Johnson, is a Polynesian demigod in the film.

The costume included brown fabric to signify the character’s darker skin tone, leading some to label the look as brownface. 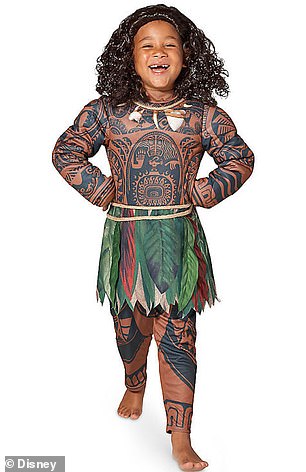 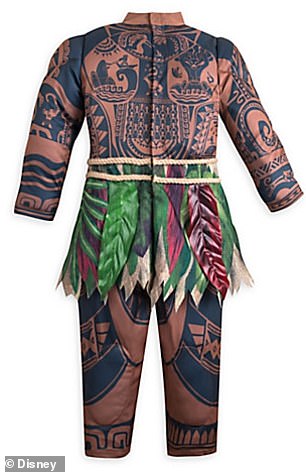 Controversy: A few months before the movie hit the big screen, Disney pulled its Maui costume (pictured) and apologized after it was deemed to be cultural appropriation 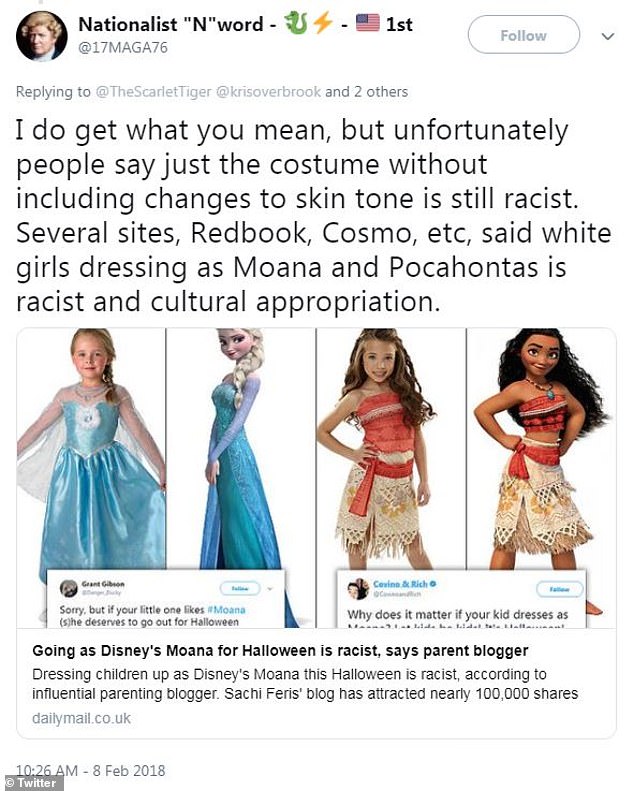 Stance: Several writers have advised parents to speak to their children about cultural appropriation and explain why it is racially insensitive for them to dress up as Moana

Disney swiftly apologized for the costume, which it immediately stopped selling.

‘The team behind Moana has taken great care to respect the cultures of the Pacific Islands that inspired the film, and we regret that the Maui costume has offended some,’ Disney said in a statement. ‘We sincerely apologize and are pulling the costume from our website and stores.’

A year later, parenting blogger Sachi Feris wrote an essay for Raising Race Conscious Children about why she wouldn’t let her white daughter dress up as Moana for Halloween, which went viral.

In the post, titled ‘Moana, Elsa, and Halloween,’ the writer explained her reasoning for letting her then-five-year-old dress up as Elsa from the Disney hit Frozen but not Moana after discussing cultural appropriation with her little girl.

‘Elsa is an imaginary or made-up character,’ she wrote. ‘Moana is based on real history and a real group of people…if we are going to dress up a real person, we have to make sure we are doing it in a way that is respectful. Otherwise, it is like we are making fun of someone else’s culture.’

‘A child whose family is Polynesian could dress up using that type of traditional clothing, but Moana’s culture is not our culture,’ she told her daughter.

Weighing in: With Halloween right around the corner, people continued the debate on Twitter this month 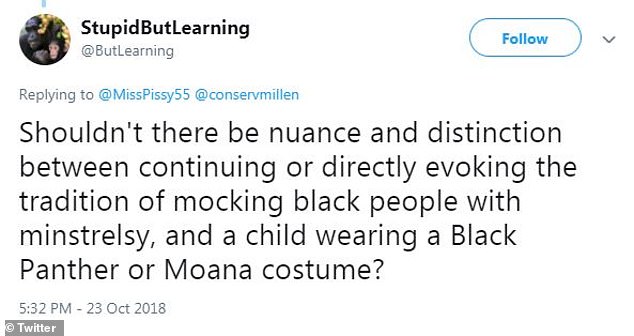 Opinion: Some people feel their should be a distinction between mocking minorities and children dressing up as their favorite characters 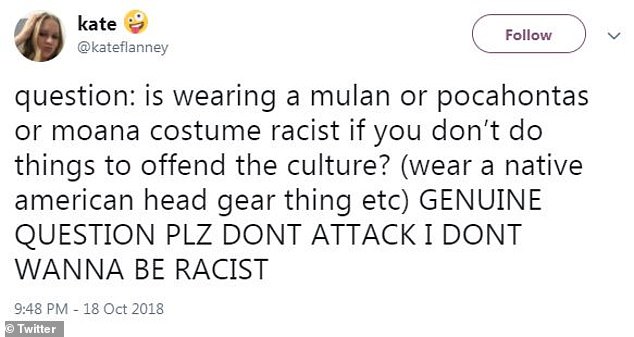 Genuine question: Some Twitter users asked whether or not it is racist to wear costumes of characters from other cultures

Candid: One man noted that his three-year-old daughter has a Moana costume because she loves her

Many people took to the comments section of the post to praise the mom for teaching her daughter about race and culture.

‘I admire your perseverance in interacting with your daughter,’ one woman wrote. ‘I realize talking about race and culture is an ongoing deeply important conversation.’

However, there were others who argued that children shouldn’t be denied the joy of dressing up as the characters they admire.

‘It is not racist to desire to portray someone you love in your own skin,’ someone commented.

The public conversation continued after Redbook published the article, ‘Maybe Don’t Dress Your Kid Up As Moana This Halloween?’ last year.

‘You can (and should) strive to be better than you were 10, 20, or 30 years ago,’ the article stated. ‘If you missed the mark when you were younger, maybe think about using this Halloween as an opportunity to teach your kids about the importance of cultural sensitivity. 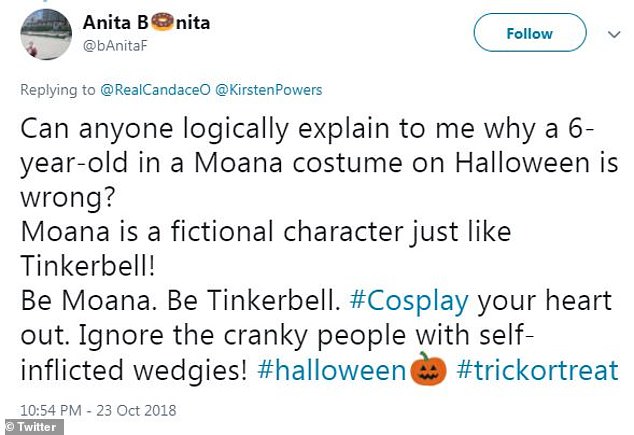 Argument: One woman advised children to ‘cosplay your heart out’ and dress as whoever they want on Halloween 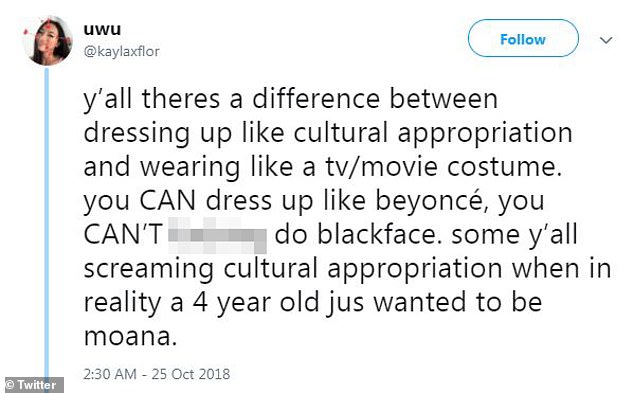 Distinction: This Twitter user argued that a four-year-old waning to be Moana is not the same thing as cultural appropriation

Confused: One mom admitted she is struggling to figure out how to explain cultural appropriation to her three-year-old daughter, who wants to dress as Moana for Halloween

‘If your child’s dream costume feels questionable, don’t just throw up your hands and hand over your credit card. You’re the parent here, and the onus of what your child wears falls on you. If your kid wears a racist costume … you’re kind of wearing it too.’

In the weeks leading up to Halloween, people have continued the debate on Twitter, with many admitting they’re not sure what they should do.

‘Shouldn’t there be nuance and distinction between continuing or directly evoking the tradition of mocking black people with minstrelsy, and a child wearing a Black Panther or Moana costume?’ one person asked.

‘Ah Halloween, when I have to explain to white parents why moana costumes are indeed cultural appropriation,’ someone else tweeted.

And one mom admitted she is struggling to figure out how to explain cultural appropriation to her three-year-old daughter, who wants to dress as Moana for Halloween.

‘I’m getting her PJ Masks costumes and hoping she’ll forget about Moana. Wish me luck!’ she tweeted.