Furious mob tie a man and his female cousins to a tree, brutally thrash them with ropes and sticks and ‘molest the two women’ for helping him run off with a married woman in India

A man and his two cousins were tied up and brutally thrashed by an angry mob as hundreds watched after he was accused of running off with a married woman in India.

Horrifying footage shows the three victims wincing in pain as villagers whipped them with ropes and beat them with sticks in Madhya Pradesh’s Dhar district.

There are reports that the two females, who had been accused of helping their male relative, were also molested. It is understood to have been organised by the husband of the married woman. 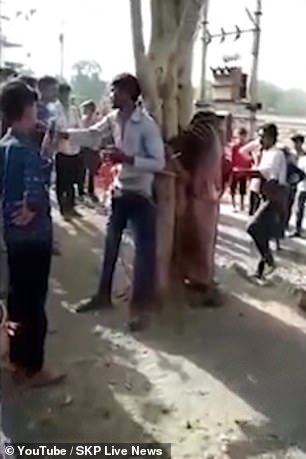 A man in a blue shirt, who allegedly eloped with a married woman, is beaten while tied to a tree in a small village as hundreds of the villagers gawp at the incident

Hundreds of people gathered for the Medieval-style of punishment in which the three victims were lashed to a tree.

The three victims were brutally whipped on their backs with a series of objects including, at one point, a branch.

The man, who is alleged to have eloped with a married woman, pleaded for mercy from someone who held a weapon aloft.

Several women also took turns to lash the two females who were struck repeatedly around their legs and backs.

One of the females tries to block the blows, but an elderly man twists her arm as another man and a woman continue whipping here.

The punishment is said to have gone on for several hours before the victims were untied. 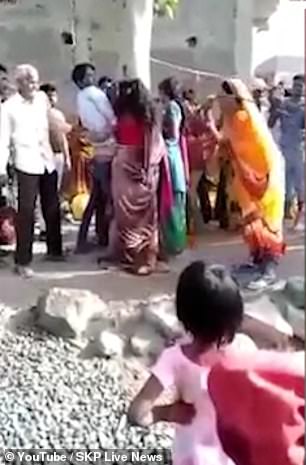 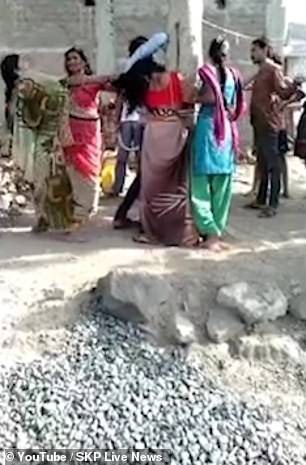 A child (bottom left) looks on as women from the crowd, believed to be the family of the eloped husband, take it in turns to beat the man and his two cousins

It is also alleged that the two women were molested by people in the crowd as revenge for their cousin eloping.

Local police have since filed a case against nine people, with four of them still on the run.

‘We have arrested five people, including three women, and they have been sent to jail. We hope to arrest the four absconders soon,’ CSP Sanjay Muwel told the Times of India. 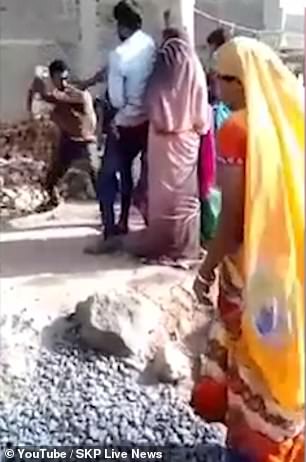 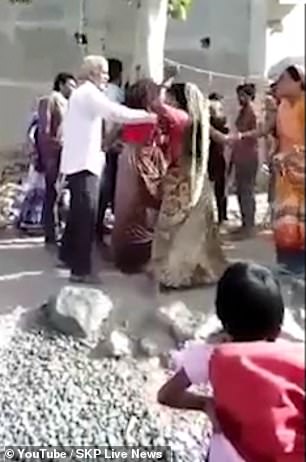 One of those wanted is named Mukesh, the husband of the woman who is believed to have eloped with one of the victims.

Officer Muwel said the wife ran away with her lover a few days ago, and that he had gone to file a missing person’s form at Dahi police station.

But he soon tracked her down and contacted his wife’s lover to invite him to the Arjun Colony area for a ‘compromise’.

The man decided to accept the offer, but when he arrived with his cousins, Mukesh and his family allegedly molested the girls and beat all of them.