Mobile phone bans for Australian school students for term one

Students are set to lose access to their mobile phones at during class hours at most Australian public schools this term.

Public school students in Victoria and Western Australia will be banned from using their phones at any time during school hours in an effort to reduce distractions in the classroom, prevent cyber bullying and anti-social behaviour.

New South Wales primary schools will restrict the use of phones during breaks and classes after trialing restrictions at 22 schools in 2019, with primary schools having a one-year grace period to revise measures if they are ineffective.

Tasmania will enforce a complete ban on phone use during school hours for primary and secondary school students starting in term two.

Public schools in Western Australia and Victoria have banned all mobile phone use during class time, with other states including New South Wales restricting the use of devices at school (stock image)

Students have to switch off their phones and store them in lockers during school hours until the final bell. In the case of an emergency, parents or guardians can reach their child by calling the school. Potential exemptions for educational purposes or children with medical conditions.

Pupils from kindergarten to Year 6 will not be permitted to have mobile phones in their possession at all, while students from Years 7 to 12 must have them turned off and out of sight. Smart watches must be set to airplane mode. Potential exemptions for educational purposes or children with medical conditions.

The use of digital devices by primary school students must be restricted during class, at recess and at lunch. Potential exemptions for educational purposes or children with medical conditions. Primary schools are also being given a one-year grace period to revise how they run the ban if certain measures are not working.

From Term 2 of 2020, students from primary school to Year 12 will be required to have their phones ‘off and away’ all day. Year 11 and 12 students are able to opt out, subject to approval from their school association. Potential exemptions for educational purposes or children with medical conditions.

Victorian Premier Daniel Andrews believes his state is ready for the measures, even if they are not universally popular.

‘We want our kids focused on learning, not on snapchatting and texting and whatever else you might do on a mobile device,’ he said on Monday.

Many high schools and private schools around the country have already placed their own bans including Newington College in Sydney’s inner-west, The King’s School in Parramatta, and Wenona Girls School in North Sydney.

Medical exemptions may be made for students with existing conditions, with extra measures being taken for smart watches and other wearable devices, such as removing them during exams to avoid cheating or plagiarising.

Some parents have bought their children wearable devices to avoid mobile phone bans in their children’s schools, with Melbourne’s McKinnon Secondary College principal Pitsa Binnon telling the Australian Financial Review that parents can be the problem in needing to know where the child is at all times.

‘I think it’s really important for kids to come to school and be in this bubble for the period of the school day. I’m sure kids will survive till they get home to find out what’s for dinner.’

Some smart watch brands such as Spacetalk offer ‘school mode’ in their watch settings, which makes the watch works as a regular watch before school finishes, allowing students to communicate with parents after class.

Spacetalk released a survey of 1000 parents of primary school aged students and found that 72 per cent believe their children should be able to wear smartwatches.

Kylie Crawford from the NSW northern beaches says her eight-year-old daughter Samaya wears a watch in ‘school mode’ all day, and after 3pm receives messages from her parents with her school pick up details.

Ms Crawford says she hopes schools do not crack down on these devices in classrooms.

‘A ban on them bringing them to school would not be beneficial to families, Ms Crawford said. 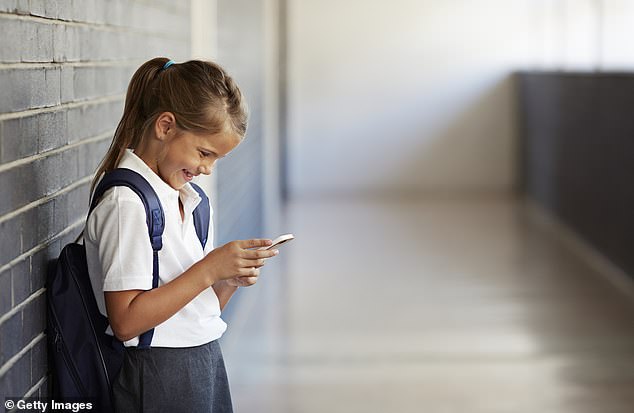