A shed on wheels has broken its own land speed record after hitting more than 100mph on a Welsh beach.

Kevin Nicks, 54, is the creator of the £13,000 Fastest Shed, which he first tested on Pendine Sands in Carmarthenshire last year, reaching an impressive 80mph.

Mr Nicks, a gardener from Chipping Norton, Oxfordshire, spent the winter replacing the engine of the modified Volkswagen Passat with a 450 horsepower twin turbo – and in May this year he reached a top speed of 101.046mph.

Kevin Nicks pictured with The Fastest Shed on Pendine Sands in Carmarthenshire, Wales

He returned to the Welsh beach this weekend and again broke his land speed record on Sunday, clocking 101.581mph in the workshop on wheels.

Mr Nicks said he made the vehicle, which he started building after hitting a deer in the countryside, to ‘take his daughter to school and pop to the shops’, but also to ‘do something different’.

Now, it is the only road-legal motorised shed in the world, he claims. 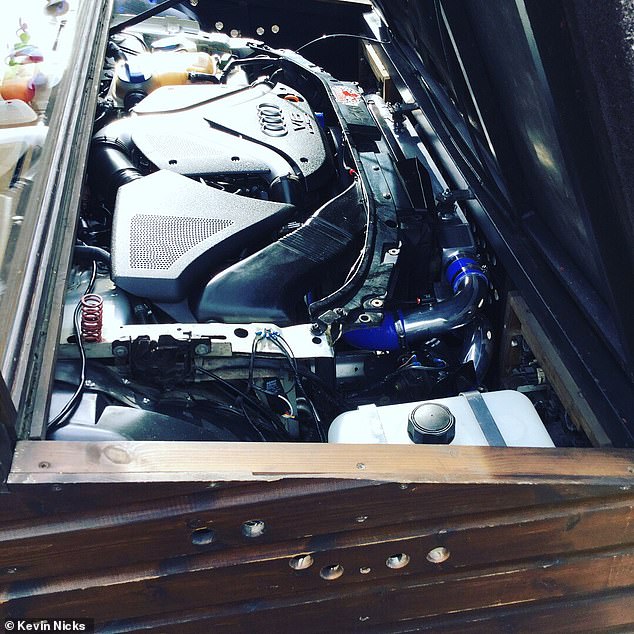 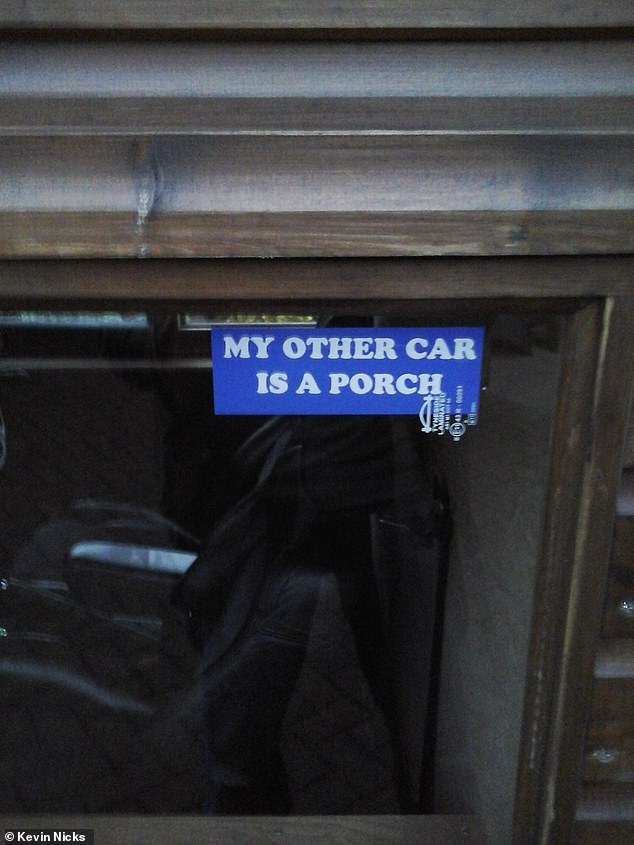 As well as its powerful engine, the Fastest Shed is fitted with a trick hydraulic system which makes the car ‘go up and down’, air conditioning, electric windows and remote central locking

The vehicle beat its speed records at The Straightliners ‘Top Speed’ event this weekend.

Speaking of Saturday 22, Mr Nicks said: ‘I walked down on to the sand – if you’ve never been to Pendine you should go, it’s an amazing place – my vehicle weighs two-and-a-quarter tonnes and I could see it sinking, so I wouldn’t risk it on Saturday.

‘On Sunday the forecast was completely opposite to what they said and it was a glorious day, although windy, which made things difficult.

‘I traveled a long way to do it and people had come to see me so we went for it.’ 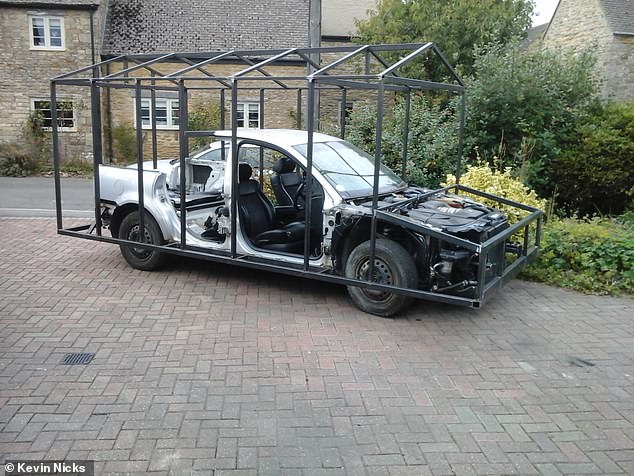 Humble origins: Mr Nicks built the shed around his damaged Volkswagen Passat (pictured) after he hit a deer while driving in the Oxfordshire countryside 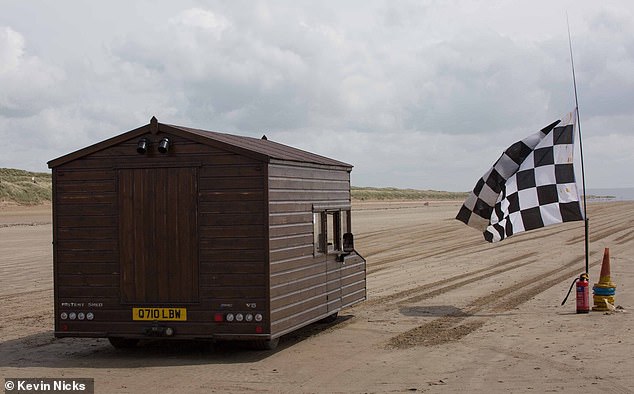 The Fastest Shed is fitted with a trick hydraulic system which makes the car ‘go up and down’, along with air conditioning, electric windows and remote central locking.

Mr Nicks said: ‘There are lots of ways of setting lots of records, I hold the Guinness record at the moment which last weekend I actually beat but it takes three months to get all of that through.

‘The original chassis was a Passat. The original engine I actually blew that up about a year ago so I built a 450 horsepower twin turbo engine. 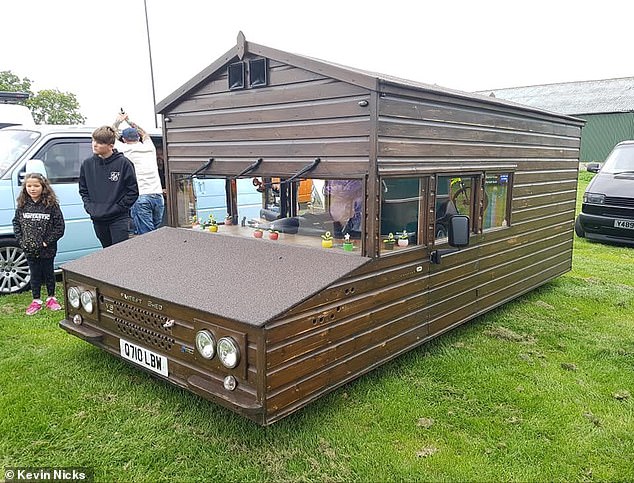 The Fastest Shed: Mr Nicks, 54, said he built the vehicle to ‘do something different’

‘My aim was not to blow it up again because I spent all winter building this engine to put it in and on my second event early on in the year I blew it up and had to do it all again,’ he said. 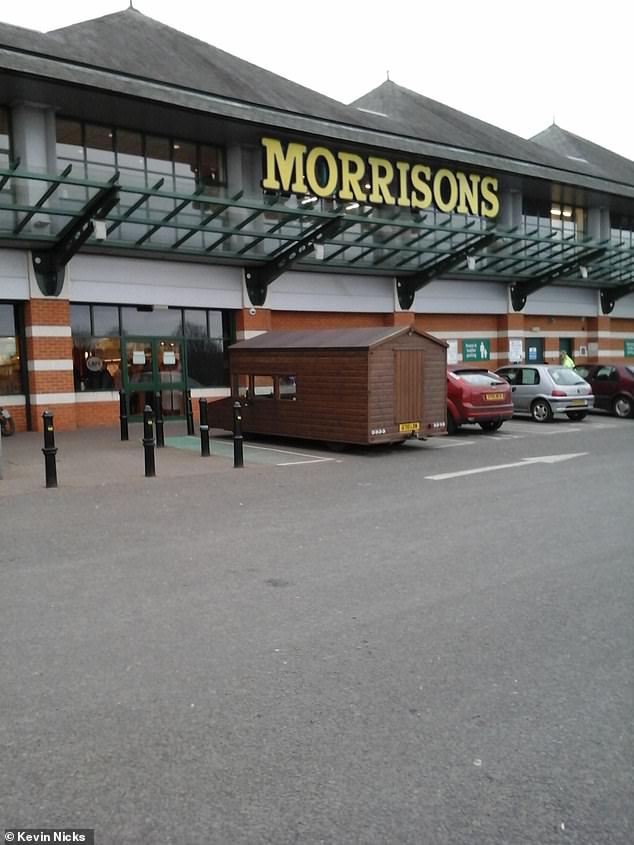 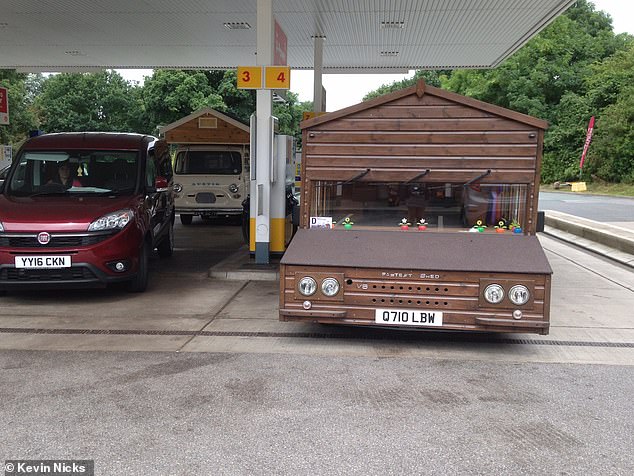 ‘A lot of people are just doing the same, the humdrum, day after day,’ Mr Nicks said

On September 25 1924, Sir Malcolm set the record at 146.16 mph before breaking it the following year when he reached 150.75mph in his distinctive-coloured car.

Mr Nicks said he was ‘honoured’ to have achieved the world’s fastest garden shed record on the beach where Sir Malcolm set his record.

When asked why he built the mobile shed Mr Nicks said: ‘Do something different. A lot of people are just doing the same, the humdrum, day after day, working so that when they retire they can have a life.

Mr Nicks’ Instagram page Fastest Shed has 20,000 followers and his Facebook page of the same name has 1,500 likes.

He has driven the shed from Lands End to John O’Groats to raise money for a local hospice where his mother died after a five-year battle with cancer.