Mobs of British thugs brawl in the street in Magaluf

Rowdy British tourists have been involved in another late-night drunken brawl in Magaluf, despite the main party strip being closed.

A furious resident filmed two groups of around 30 men running up and down part of of the resort, on the Spanish party island of Majorca, and getting involved in fights after they were refused access to one of the bars.

The four-minute video shows the Britons taunting each other and punches are thrown on several occasions.

At one stage, a young man lies in the middle of the road for more than a minute before struggling to get up and walk away while others run down the main road, past other hotels. 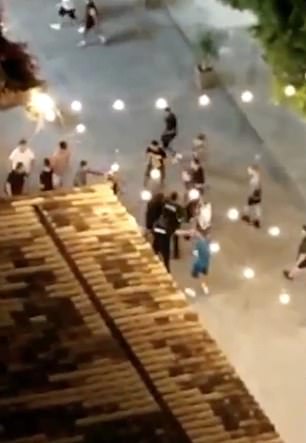 The area is virtually deserted compared with the usually-packed summers before the coronavirus pandemic but that hasn’t prevented some of the few Britons there getting into trouble.

Locals have slammed their behaviour while traders in the now-closed Punta Ballena area of Magaluf says it demonstrates exactly what they had feared; Brits unable to drink or party in the famous strip simply going elsewhere to seek out party venues and bringing disturbances with them.

Yet bar owners on Punta Ballena still want to reopen and are challenging the Balearic government’s closure order which will last for two months, if not longer.

The latest video shows the two groups of Brits shouting and jeering in an area of Magaluf known as the Plaza Emporium.

Local paper Diario de Mallorca reported this morning that the youths, who were part of two different groups, were not allowed into the bars at the Plaza Emporium due to the fact that they were already intoxicated.

The tourists confronted the security guards and began brawling with one another.

As they walked down the street in search of other open bars, some continued to fight.

The confrontation was filmed by a local resident of the area, according to the publication.

Punta Ballena was closed down last week after Brits were involved in another disturbance, with some of them clambering on top of parked cars 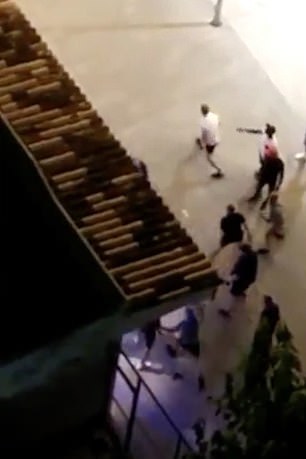 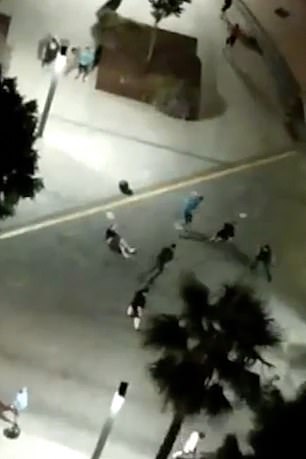 Incensed business owners on Magaluf’s main nightlife strip say closure was not the right way to curb the scenes which were considered by the Balearic government to be a threat to coronavirus safety and the image of Mallorca.

‘It’s like tackling illegal car racing. Instead of taking action to prevent them, all the roads are cut off,’ claimed Rosana Gabardón, general secretary of Balearic Association of Night Leisure and Entertainment.

They have lodged an appeal against the decision which also relates to the enforced closure of two other nightlife strips, Miquel Pellisa and Pare Bartomeu Salvà, in Playa de Palma, where German holidaymakers were involved in mass party scenes without social distancing or masks.

The Balearic government said it had no choice but to take tough action for at least two months though many fear the party zones will never open again.

The nightlife body has teamed up with the Association of Traders and Companies of Tourist Services of Mallorca to fight the closures and today, will present its case to parliamentary groups. 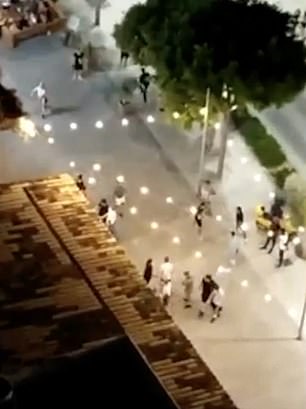 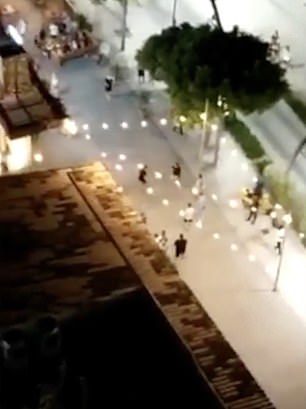 Local paper Diario de Mallorca reported this morning that the youths, who were part of two different groups, were not allowed into the bars at the Plaza Emporium due to the fact that they were already intoxicated

They say the businesses which were closed down had proper licences in force and have called in the lawyers.

Their case will also call for compensation for lost and ruined trade.

‘With this decree, we will lose a lot of money and we will not stand idly by,’ said one bar owner from Punta Ballena.

‘They have sunk us financially and emotionally. They have not given us alternatives or the possibility to defend ourselves and the only thing we are clear about is that we have to close for 60 days; the season is lost but it’s not going to stay that way. ‘

Many of the owners say they had to take out bank loans to put coronavirus safety measures in place after more than three months of closure under Spain’s now-lifted State of Emergency.

The Balearic government said it had only targeted places which sold alcohol but the traders claim all businesses were closed, including shoe shops, newsagents, cafes and souvenir bazaars.

The appeal case will argue it would have been better to identify drunken tourists and fine them instead of making ‘the righteous pay for the sinners.’