A woman who hid her ‘ugly’ leg for 14 years after being mocked by bullies has defied her critics by forging a successful modeling career.

Berlange Presilus, 28, who is originally from Haiti and now lives in Toronto, has a port wine stain and prominent varicose veins on her right leg due to rare disorder known as Klippel-Trenaunay Syndrome (KTS).

As a child, Ms Presilus was cruelly mocked by her peers who said it looked like her leg was dying, prompting her to cover it under long trousers and skirts for more than a decade.

Keeping her ‘flawed’ limb to herself, Ms Presilus went on to model for the likes of Toys R Us, Samsung, Mac and Johnnie Walker.

Ms Presilus, who took part in a photo shoot showing off her leg, is speaking out to encourage others to embrace their differences.

She said: ‘I feel great. I have discovered that I have magic and now I’m unstoppable.’

Berlange Presilus, who hid her ‘ugly’ leg for 14 years after being mocked by bullies, is showing off her ‘flawed’ limb in a photo shoot to encourage others to embrace their differences 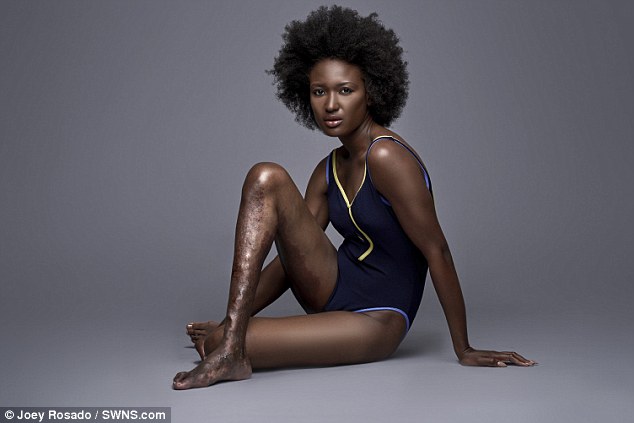 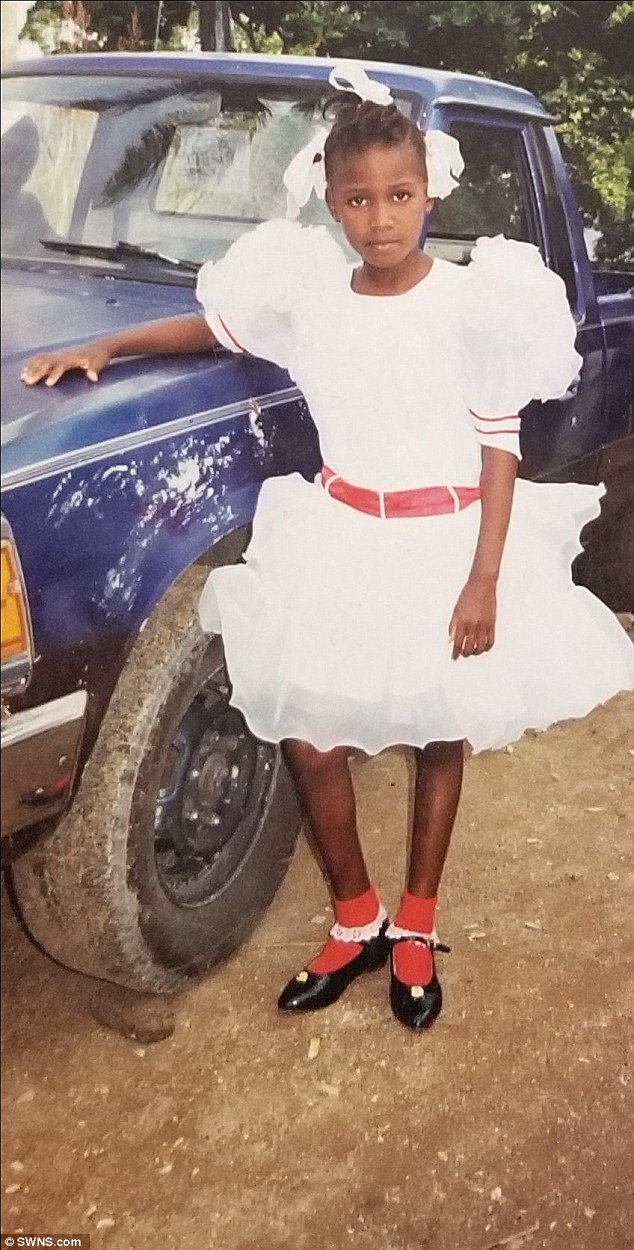 As a child, Ms Presilus’ peers made cruel comments, saying her leg looked like it was dying

WHAT IS KLIPPEL-TRENAUNAY SYNDROME?

Klippel-Trenaunay syndrome (KTS) is collection of symptoms such as port wine stains, varicose veins and extra growth of one limbs.

It is present at birth but may not become apparent until varicose veins are diagnosed.

KTS’ cause is unclear but may be due to blood vessel problems during pregnancy.

KTS cannot be treated, however, its symptoms can often be eased.

Limb hypertrophy can be treated via raising sufferers’ shows or surgery.

‘It was the ugliest thing I had ever seen‘

Speaking of her insecurities as a child, Ms Presilus said: ‘I used to wear long jeans all the time and long skirts, even in the summer.

‘If I exposed my leg I would get laughed at or teased.

‘They would say, “Look at her, it looks like her leg is about to fall off”.

She said: ‘I would see models in magazines with long hair and bright lipstick and I dreamed of being like them but then I would look at my leg and think, “how could it ever happen?”

‘I thought my leg was ugly. It was the ugliest thing I had ever seen.’

Ms Presilus is keen to change how beauty is perceived in modelling, saying: ‘Even now when you look at the bigger picture, what is being showed on magazines and in TV, you rarely see anybody with flaws.

‘The industry wants to make people believe that perfection exists and if you can’t look like that girl in the magazine then you are not beautiful.

‘The truth is that we all have different bodies.

‘I want people to hear my voice and see my story and realize that.’ 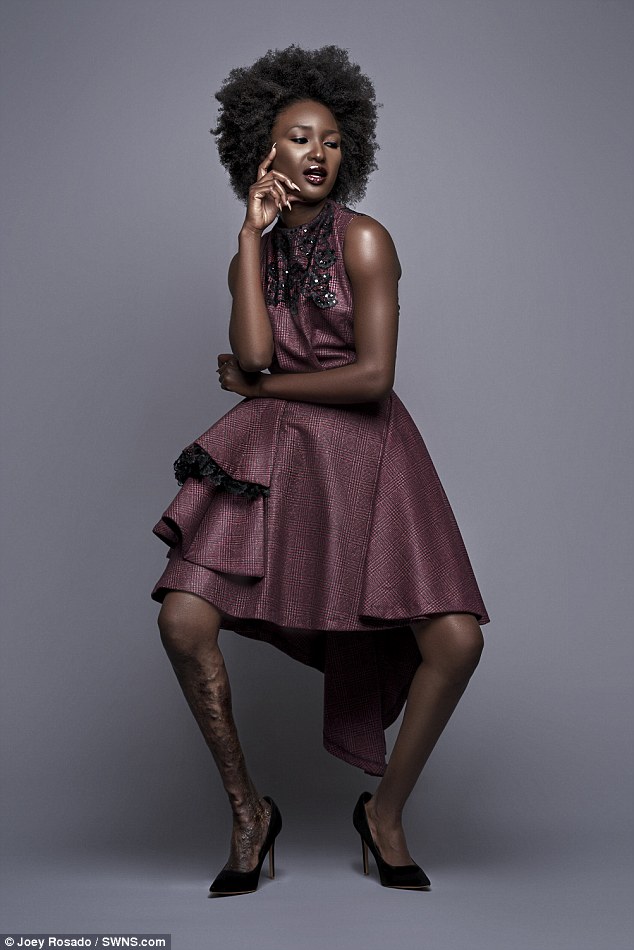 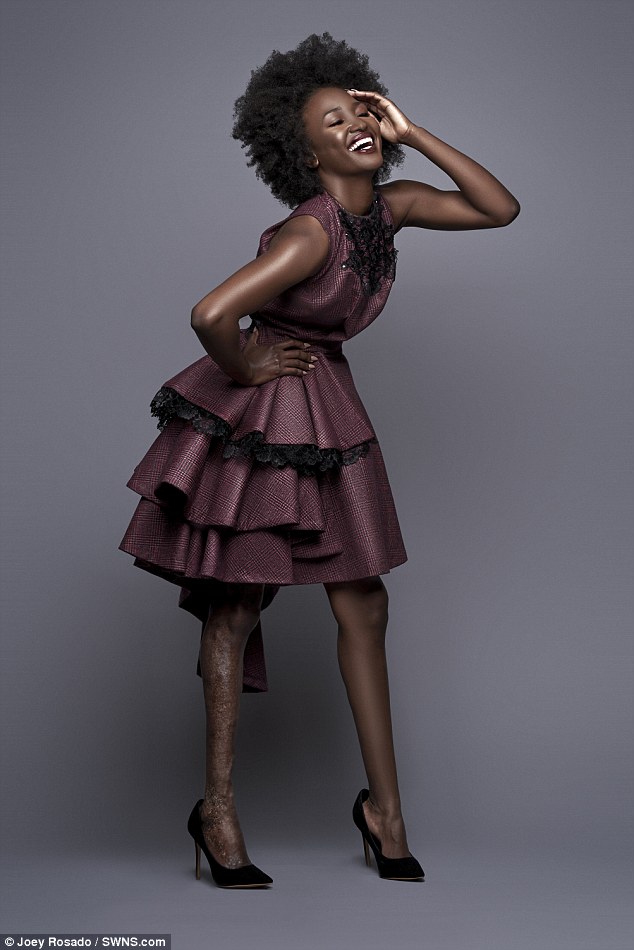 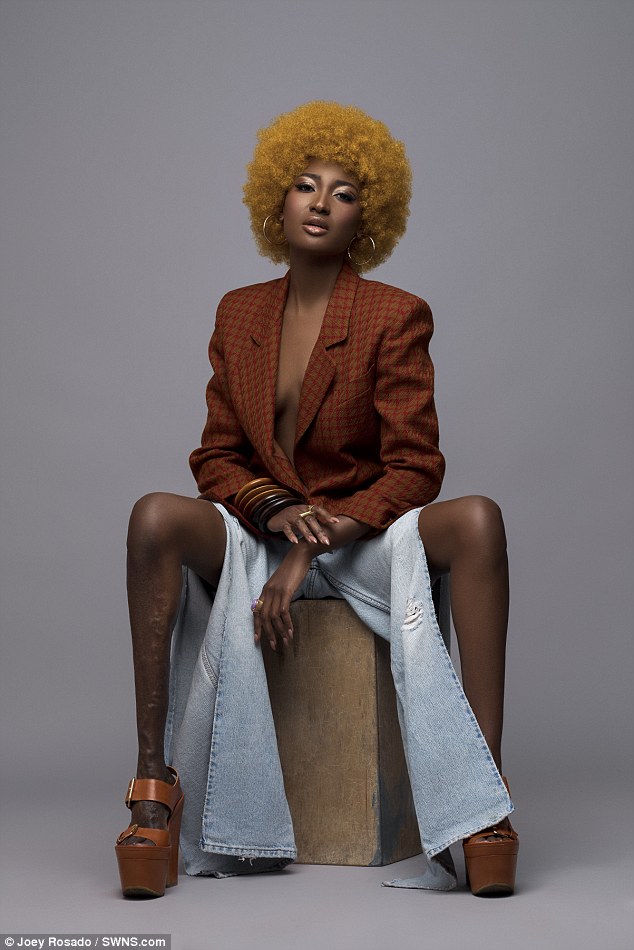 Although angry and hurt, Ms Presilus decided she had to stand up for herself 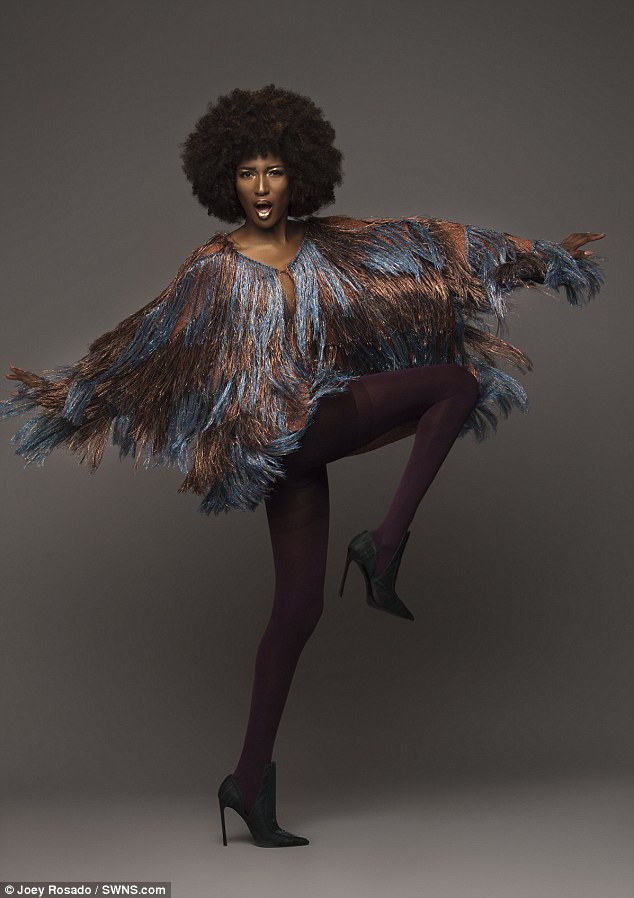 Ms Presilus was born with a lump on her right leg, formed of a mass of intertwined veins, which grew bigger as she aged.

As a child, the condition caused Ms Presilus to crawl and walk with a left tilt, while blood circulation issues made her toes curl, resulting in painful cramps.

Although she went on to launch a successful modeling career, Ms Presilus initially avoided any jobs that required she show her ‘flawed’ leg.

Yet, in 2016 Ms Presilus was asked to go to Singapore for a swimwear shoot.

She said: ‘I was going through the motions of wanting to speak out because I thought my voice might encourage somebody else.

‘I told my agency about it but the room was pretty quiet. My agent said, “Why didn’t you tell us in the beginning?”

‘The reason was that I wasn’t ready to be rejected.

‘After that the casting calls started to slow down and it went from one a month to nothing.

‘Eventually I asked if it was my condition and she said, “Unfortunately it is.”

She said: ‘When I found out I wept and I was angry. I felt like it was unfair.

‘It took me years but I started questioning things and asking myself, “Was I really born just to lie?”

‘I decided enough was enough and that I had to stand up for myself.

‘I decided to take part in this photoshoot and I have never looked back.

‘I have stopped wearing long trousers and changed my whole wardrobe.

‘It was like my whole life was changed. Now I feel great. I discovered that I had magic and now I’m unstoppable.’ 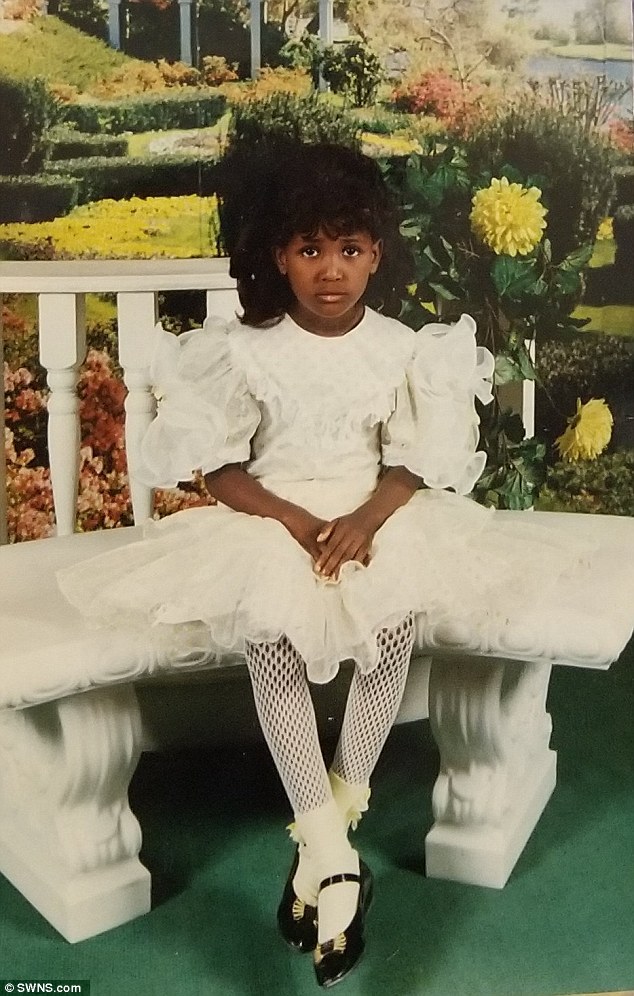 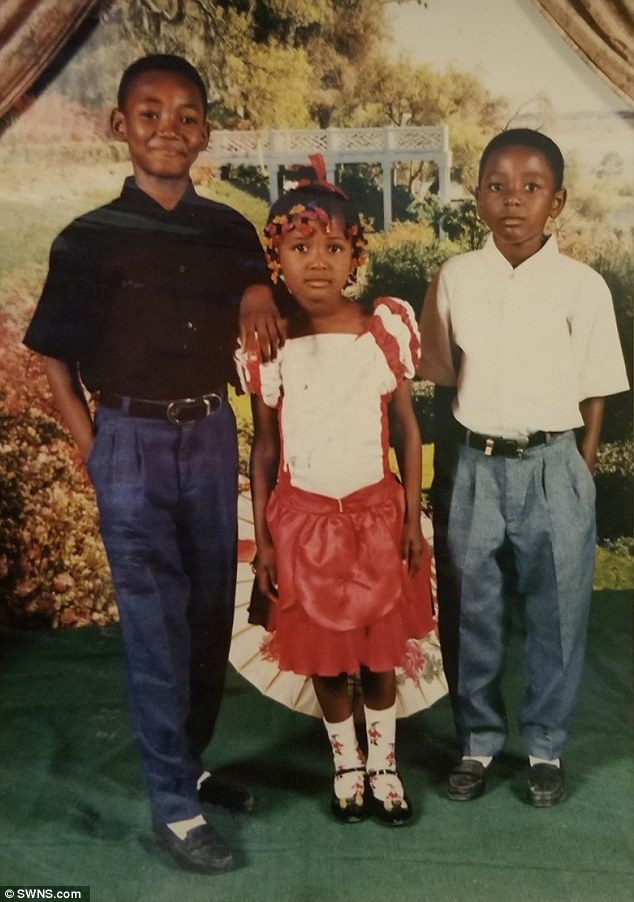 Pictured with her brothers Sherlain and Thedelin, Ms Presilus used to stand with a tilt 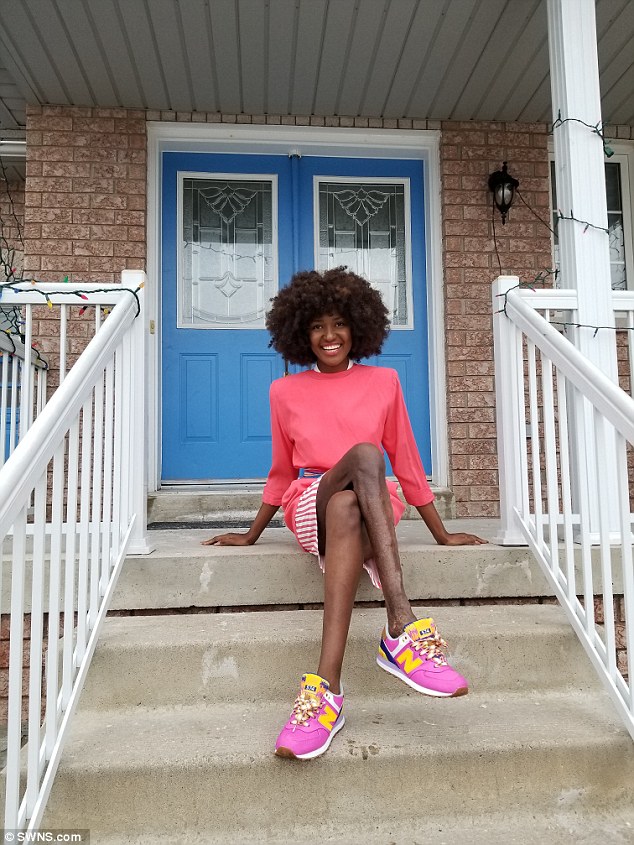 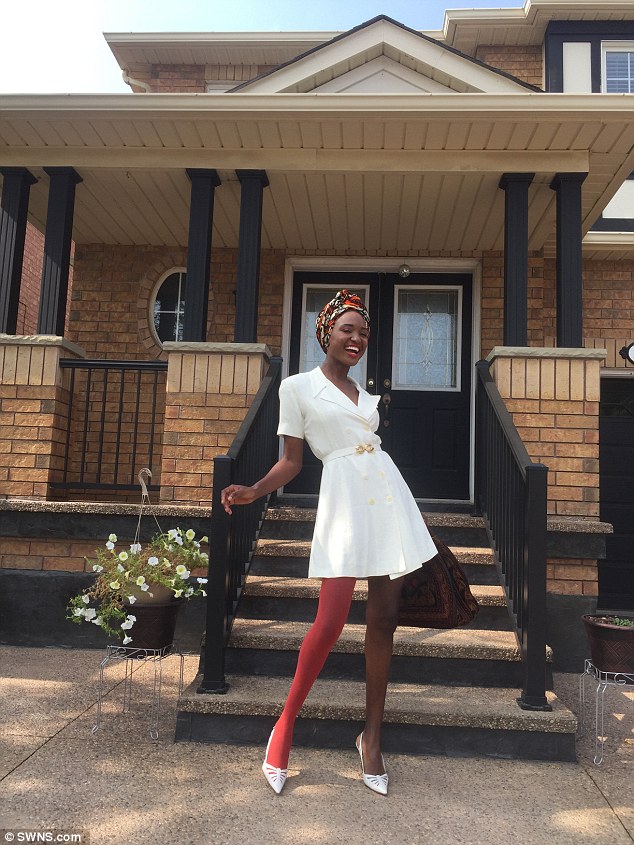 Pictured wearing a compression sock, Ms Presilus says she has never looked back