She was a petite size 6, had spent hours in the gym and was eating orange juice-soaked cotton wool when her modelling agency told her she would not be booked for a job because she was too big to fit into a pair of designer trousers.

Instead of feeling her usual sense of shame, model Charli Howard was consumed by anger.

On the way home she wrote a Facebook post in which she stated: ‘Here’s a big F*CK YOU to my (now ex) model agency for saying that at 5ft 8in tall and a UK size 6-8, I’m ‘too big’ and ‘out of shape’ to work in the fashion industry.’

Almost two years on, the model who is now also a body-positive activist is again highlighting the issue ahead of the release of her memoir called Misfit which is aimed at young adults which charts the eating disorders and anxiety she suffered for 20 years.

‘I’d eat an apple a day, and I still wasn’t thin enough for them,’ she said.

Ms Howard, from Peckham, even fainted on a shoot from eating so little but claims a a photographer simply fanned her with his hands and told her: ‘But you look great.’

Curvy model Charli Howard, 26, previously shared these before and after photos and declared that ‘I may be heavier than I was, but I’m happier than I’ve ever been’ 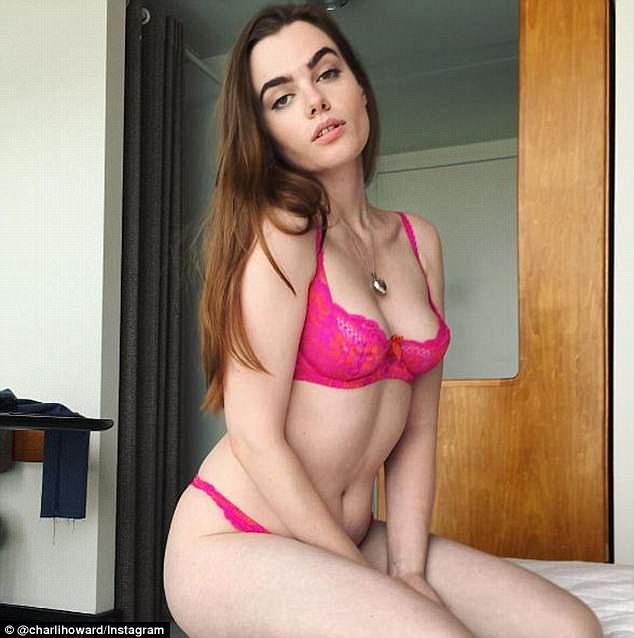 The model has revealed she fainted on a shoot from eating so little and a photographer fanned her with his hands and said: ‘But you look great’

‘It feels insane, looking back now that I went along with these weird beauty standards,’ she told The Observer.

‘In fact, by working in the industry that partially caused my illness, I was contributing to the problem. It couldn’t last, and it didn’t.’

Ms Howard explained that she had just returned from a shoot in Stockholm in 2015 when she got a call from her agent.

‘We’ve had a chat,’ the booker said, ‘and we don’t feel this is working. The Scandinavian client said you were too big to fit into the trousers. You’re just never going to be small enough.’

The model – who had been going to the gym for five hours a week – said it certainly wasn’t the first time she’d been told by industry executives to lose weight. 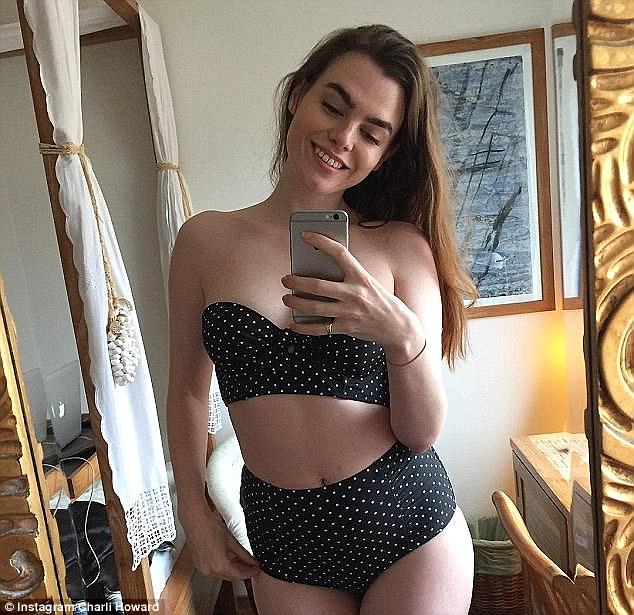 The Londoner, who now lives in New York, has become known for her frequent posts about body positivity

But it was the first time she felt compelled to fight back and write a Facebook post on her way home.

It wrote: ‘I will no longer allow you to dictate to me what’s wrong with my looks and what I need to change in order to be ‘beautiful’ (like losing one f***ing inch off my hips), in the hope it might force you to find me work.

‘I refuse to feel ashamed and upset on a daily basis for not meeting your ridiculous, unattainable beauty standards. The more you force us to lose weight and be small, the more designers have to make clothes to fit our sizes, and the more young girls are being made ill.

‘It’s no longer an image I choose to represent. If an agency wishes to represent me for myself, my body & the WOMAN I’ve become, give me a call. Until then, I’m off to Nando’s.’

Being thin took over my life

In her book, she says the last time she remembers feeling ‘angst-free’ and not having any body issues was  when was eight years old.

After that, she says her longing to be thin took over her life.

‘To this day, I have never craved or wished for anything so deeply,’ she said. ‘I wanted to feel the outline of bones underneath my clothes. I wanted people to gasp at my frail frame.’

She reveals that nobody was aware that she was throwing up her meals. She refers to her OCD, depression, anxiety and eating disorders as ‘sexy illnesses’ because their outcomes are displayed in glossy magazines. 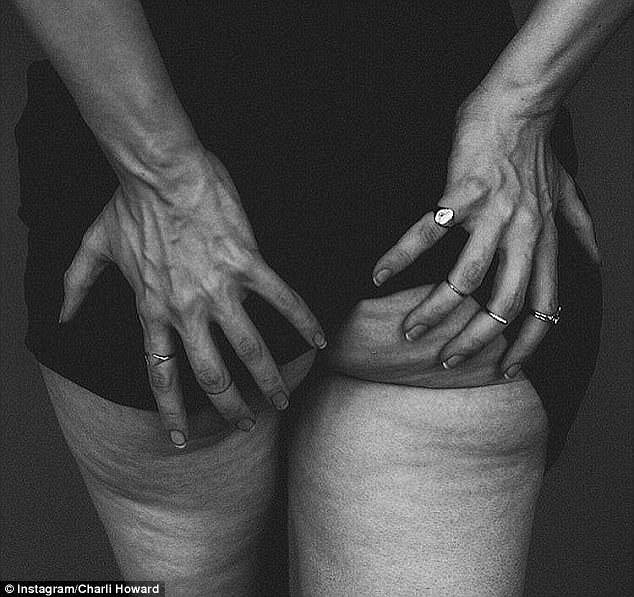 ‘Thirteen years ago, when I started being sick and taking diet pills, it was seen as very glamorous,’ she said.

‘There were Paris Hilton images everywhere: wanting to be extremely thin was normal.’

She recalls how she had a red bracelet with a butterfly on it which was secret sign to other girls that you were part of the pro-ana movement.

When she became a model, in Paris, she was told to lose 2 inches from her hips in a week. 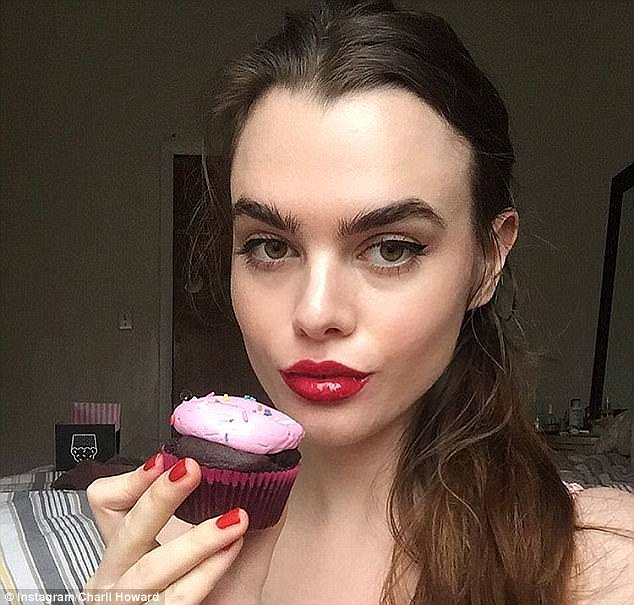 The New York City resident now regularly makes a point on social media to show off her natural form and to tell her followers that there is nothing wrong with having curves or a bit of extra weight – or a backside covered in cellulite.

Last April she took to Instagram to show just how far she has come since learning to accept her curves.

Along with a before and after photo she wrote: ‘Look how far I’ve come!! I may be heavier than I was, but I’m happier than I’ve ever been, and I never, EVER want to go back to that miserable and lonely time.’

She went on to claim that she is ‘proof that being thin does not make your life better.’

‘I know the idea of thinness can often feel like a gateway towards a more fabulous, exotic and fulfilled life, but the reality is very different,’ she added. ‘You’re just masking underlying insecurities or problems.’

ARE YOU READY FOR THIS BEACH BODY? PLUS-SIZE MODEL HITS BACK AT ‘FAT-SHAMING’ AD

All women like to look their best in a bikini, but one plus-size model is slamming a controversial ad campaign that calls for women to quickly drop weight in time for swimsuit season.

The ad, for Protein World weight loss supplements, has faced overwhelming backlash in the UK, prompting US-based model Ashley Graham to offer up her own message on preparing to hit the beach. 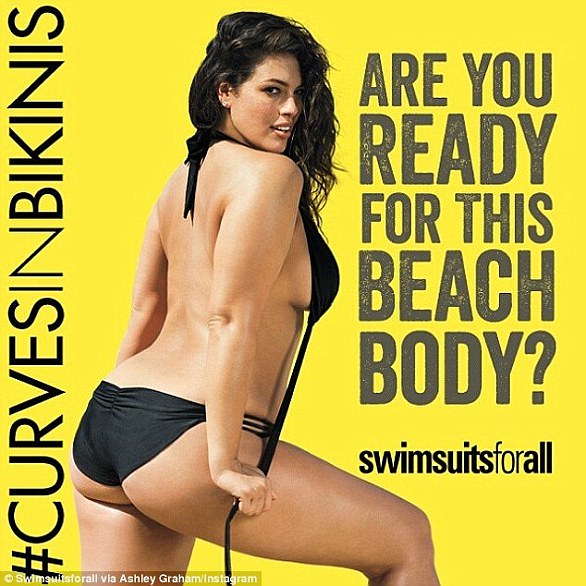 The size 16 model posted a copycat ad on Instagram, mocking Protein World’s tagline, ‘Are you beach body ready?’ instead asking her followers: ‘Are you ready for this beach body?’

Ashley’s post, which includes the hashtag #curvesinbikinis, features a shot from her Swimsuits For All campaign that ran in this year’s Sports Illustrated Swimsuit Edition, making her the first-ever plus-size model to appear in the issue. 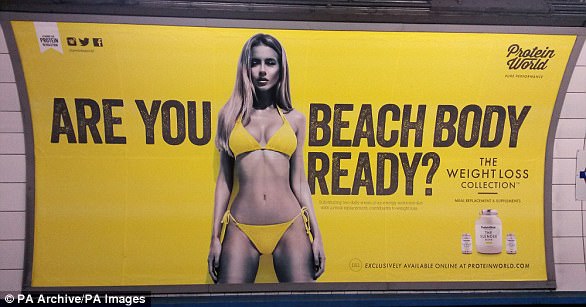 ‘There’s no reason to hide and every reason to flaunt!! [sic]’ she captioned the picture.

Ashley has also helped to promote body confidence at any size by appearing in plus-size retailer Lane Bryant’s I’m No Angel campaign, where she and other women of varying body types posed together in lingerie. The campaign was widely seen as a very public dig at Victoria’s Secret, another brand perceived to prize slim bodies.