Model Chloe Ayling has today appeared before an Italian court for the first time to be questioned about being kidnapped and held for ransom by a shadowy group called ‘Black Death.’

The 21-year-old gave her evidence via video link to a Milan courtroom where she was questioned about her ordeal.

She was expected to face accusations that she helped stage the kidnapping to boost her modelling career.

But within minutes of starting to give her evidence from a London courtroom she broke down in tears as she described being grabbed by a man wearing a balaclava and drugged. 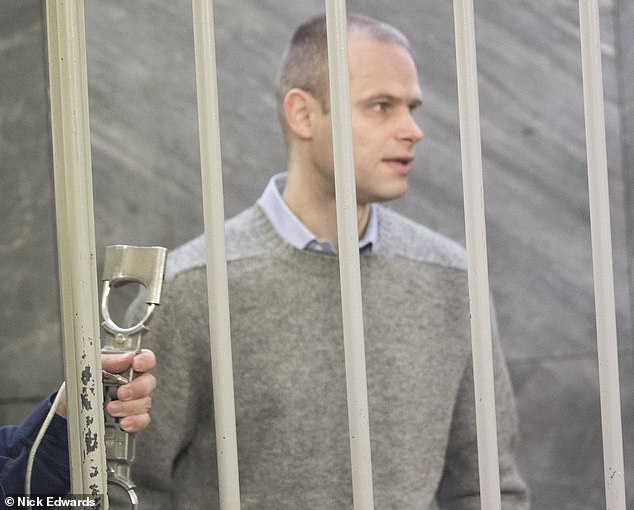 The model’s alleged kidnapped Michal Herba (pictured) watches her give evidence from the Milan court. His brother Lukasz Herba was jailed last June for her kidnap

A court usher handed her a tissue as she covered her face with her hand and gently sobbed.

Clearly distressed, Ayling said: ‘I tried to get away. There was a hand over my mouth and I could not breathe. I was trying to get the hand of my face, but I could not fight much longer.’

Ayling was lured to Milan for a fake photoshoot before being drugged, handcuffed and bundled into a suitcase during a six-day ordeal in July 2017.

The model was today giving evidence at the trial of Michal Herba, who allegedly helped his brother Lukasz abduct Ayling in July 2017.

Lukasz was jailed last June for her kidnap and Ayling was not called at the trial. 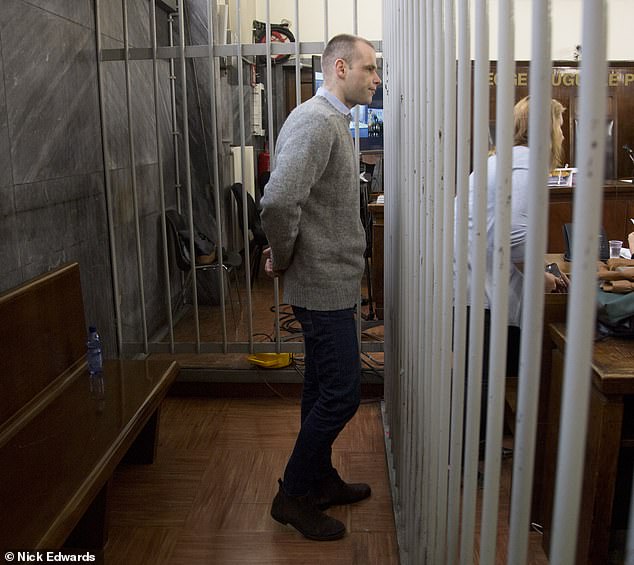 The 31 year old was jailed last June by a court in Milan after being found guilty of kidnap.

Ayling was told she did not have to give evidence at his trial – despite Herba’s claim that she had come up with the idea of being kidnapped to help boost her glamour modelling career.

Lawyers for Herba’s brother Michal, who is charged with same offence of kidnap and on trial, successfully petitioned the court to force Ayling to be cross–examined and asked about her alleged role in the kidnap.

The model had refused to attend in person saying she was too afraid to face her alleged kidnapper, but was quizzed via a video link from Westminster Magistrates Court in London.

After almost an hour of technical difficulties in setting up the video in London, Ayling appeared on screen.

Dressed in green top, black jacket and with her with hair piled in a bun the model sat in front of a computer screen at a desk in the London courtroom.

Proceedings were held up as the judge in Milan was unhappy with the camera being so far away from the model making her barely visible on the two TV screens set up for the jury in the Milan courtroom. 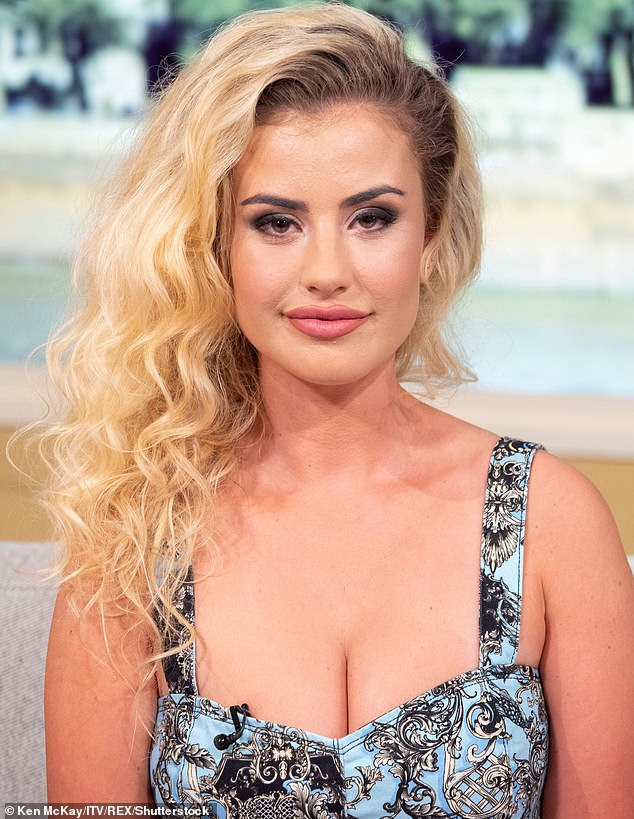 After she moved forward and the camera zoomed in on her he allowed the proceedings to continue.

Herba sat alongside his lawyer listening intently to Ayling give her version of events.

She began giving her evidence and describing the events of the morning of her kidnap in 2017.

But almost as soon as she began to speak the proceedings were interrupted by the Italian judge Giuseppe Fazio who was unhappy about how the questions were being interpreted.

The former Celebrity Big Brother contestant told the court about the day she was kidnapped and described how she took a taxi from her hotel to a studio where she was supposed to be taking part in a photo shoot.

She said after struggling with her alleged kidnapper she was injected with a drug into her wrist and passed out.

‘After I woke up I was in a restricted space. It was a canvas bag or duffel bag. There was tape over my mouth.

‘I did not know where I was, took me while to come around after the drug and heard the car engine.’

Lukasz Herba was found guilty a year ago of kidnapping Ayling and holding her hostage for six days.

The Polish born national had claimed that Ayling was a willing participant in the abduction as she wanted to boost her modelling career.

Doubts about Ayling’s story surfaced after they were captured on CCTV film walking hand in hand in the remote Italian village where she claimed to have been held.

After the verdict Ayling said she had been vindicated – but was quick to seize on her fame by joining the cast of Celebrity Big Brother.

She also wrote a book about her experience, but when modelling work failed to flood in turned to working for a £2 a minute sex chat line.

The 21-year-old is still linked to the Studio 66 site where callers can talk to Ayling by paying the premium rate.

At Herba’s trial prosecutors said he was working in tandem with his younger brother Michal.

They had lured Ayling to Milan with the promise of a photo shoot but on arriving at a studio was drugged with Ketamin and bundled into a canvas bag.

She was driven over 100 miles to a remote rented farmhouse in the Piedmont region where Herba claimed he was working for a shadowy group called Black Death.

He told Ayling unless a ranson of £265,000 was paid in crypto currency Bitcoin she would be sold as a sex slave to the Middle East.

In her witness statement Ayling said she did not try to escape as she feared for her life.

She was freed unharmed after six days when Herba dropped her off at the British Embassy in Milan.

He was arrested almost immediately as he tried to flee.

Herba presented a pathetic figure at his trial as he repeatedly changed his story over the kidnapping.

His lawyer Katia Kolakowska had wanted to question Ayling, but a judge ruled it out saying she had made a detailed witness statement.

Herba is appealing against his sentence.